HomeStoriesEuropean Names: A Comprehensive History From the Middle Ages

European Names: A Comprehensive History From the Middle Ages

While the use of surnames is common practice in modern society, this was not always the case with European Names. The practice became a common phenomenon in the Middle Ages. 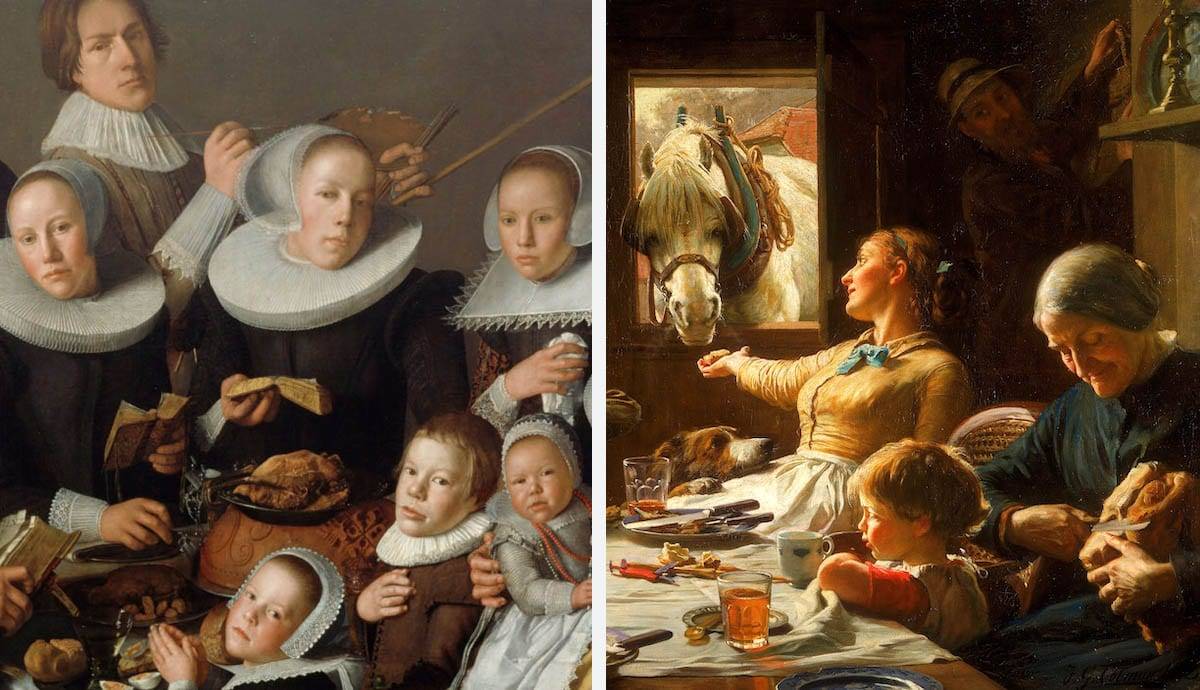 In antiquity, it was common practice for families of note to use their familial names to denote their high birth. In the Roman Republic, noble patrician families carried political sway with their name. This practice carried over into the Middle Ages – particularly among early medieval British landowners. As the population of Europe grew, it became more useful to implement a secondary familial name for identification. Without surnames, the spread of Christianity through the Western World (and the ubiquitous use of Christian given names thereafter) would prove impossible to identify which John one was referring to. For simplification purposes, let’s use the first name John for all of our European name examples when talking about the history of names here.

The Origins of European Names

The spread of Christianity through Europe resulted in the practical use of saintly names as given names. To tie oneself closer to God, it became immensely popular to name children archetypical biblical or Christian names such as John, Luke, Mary, Louise, Matthew, George, among many many others. In Orthodox states, one traditionally celebrates their “Name Day” in addition to their birthday: the day of the Christian Saint they are named after.

With a growing population, it became useful to acknowledge the familial lineage of every John in town to avoid confusion. Though this was a practice traditionally used by families of noble birth, commoners in the workplace became saturated to the point of confusion.

The practice varied by culture. Initially, surnames were implemented to note occupation, trade, father’s name, or even physical properties of the individual. The result is the reason there are so many John or Joan Smiths, Millers, or Bakers – members of families who traditionally worked as smiths, millers, and bakers. In other cases, surnames derived from a region of origin – da Vinci (from Vinci) or Van Buren (of Buren, which is also a Dutch word for neighbor.)

Traditionally, surnames followed a patronymic practice; a married woman would abandon her birth surname and adopt her husband’s surname. Their children would subsequently adopt the surname of their father.

What about the history of names in Northwestern Europe? Here, European names are commonly derived from lines of descent, marked by varying prefixes or suffixes. While across Northern Europe the most popular surnames are translations of English occupations such as Smith, Miller, and Baker, regional names also exist.

In denoting descent, this region of Europe varies by culture as to how this practice is applied. In England, the suffix -son is attached to the father’s first name and applied as a surname. For example, John’s son (also conveniently named John) would be dubbed John Johnson. His surname, Johnson, literally combines the words “John” and “son.”

In Ireland and Scotland by contrast, the “son of” or “descendent of” is manifested as a prefix. An Irishman descended from the Irish clan Connell will hold a full name such as Sean (the Irish equivalent of John) McConnell or O’Connell – the Mc- and O’- prefixes imply “descendent of.” A Scotsman would hold a name such as Ian (the Scottish equivalent of John) MacConnell – the Mac- prefix denotes one’s descendent in Scotland.

In Germanic Europe history of names, surnames are also commonly derived from the occupation – Muller, Schmidt, or Becker/Bakker being the German and Dutch equivalents of Miller, Smith, or Baker. A Germanic John Smith would be known as Hans (the Germanic equivalent of John) Schmidt. Familial European names from Germanic Europe often utilize the prefix “von-” or “van-” such as Ludwig van Beethoven. The etymology of the great German composer’s name combines “beeth” meaning beetroot, and “hoven” meaning farms. His family name literally means “of the beetroot farms.”

The history of names in southern Europe employs the same practices as in the north. Beginning with France, commonly found surnames include descriptions of physical characteristics: Lebrun or Leblanc; these names translate to “the brown” or “the white” respectively, likely either referring to the skin or hair color. Occupational surnames are also prominent in France, such as Lefebrve (craftsman/smith), Moulin/Mullins (miller), or Fournier (baker) as examples. Finally, Jean (our French John) might pass his name onto his son Jean de Jean (John of John) or Jean Jeanelot (a diminutive childlike nickname).

The history of European names of Iberian origin is interesting due to their practice of hyphenating – started by the Castilian aristocracy in the 16th century. Spaniards, male and female alike, typically have two surnames: the first of which from the mother and father are passed on to make up the two surnames of children. Descriptive surnames such as Domingo (a religiously significant name which also means Sunday) are prominent, as are occupational surnames: Herrera (smith), or Molinero (miller/baker.) Parents likewise pass names onto children: Domingo Cavallero would father his son Juan (our Spanish John) Dominguez Cavallero: John, son of Domenic the “godly” knight.

The practice sustains in Italy. Italian historical European names are often geographic: da Vinci meaning “of Vinci.” Giovanni could carry the surname of Ferrari (smith), Molinaro (miller), or Fornaro (baker.) If he was named after his mother Francesca, he could go by Giovanni della Francesca (John of Francesca.) Geographic or physical characteristic examples include Giovanni del Monte (John of the mountain) or Giovanni del Rosso (very common: “of the red hair”).

Being one of the first Christian populations in Europe, the prominent history of European names in Greece is tied to the clergy. As such, these names are evidently occupational. Clerical occupational Greek surnames include Papadopoulos (son of the priest). Surnames denoting descent are not uncommon: Ioannis Ioannopoulos is what John, son of John would be. Geographic denotations often exist in the suffixes of surnames: -akis names are Cretan in origin as an example, and -atos hails from the islands.

North of Greece, surnames tied to clerical occupation remain prominent. Interestingly, Catholicism, Orthodoxy, and Islam are all potent faiths in the region. As such, like in Greece, the most common surname in the eastern Balkans wield some form of the prefix “Popa-” or “Papa-”, tying ancestral significance to religious authority. In the western Balkans, such as Bosnia, common surnames are tied to Muslim historical religious authority, such as an imam, due to the imposition by the Ottoman Empire: names like Hodzic, coming from the Turkish Hoca.

North of Greece is predominantly Slavic in culture and in language – Macedonia, Bulgaria, Montenegro, Serbia, Bosnia, Croatia, and Slovenia, are all connected culturally to the world’s largest Slavic state: Russia. In Slavic history of names, when a family ties descent from an individual to their surname, the father’s given name carries on. Ivan (our Slavic John) in the Balkans would give his son the name Ivan Ivanovic – John, son of John. The suffix is dropped in Russia; a Russian Ivan’s son’s name would be Ivan Ivanov, while his daughter would carry the name Ivanna (or Ivanka) Ivanova.

The most common surname in both Poland and Czechia is Novak, which translates to “stranger,” “newcomer,” or “foreigner.” This is largely due to the three historically significant partitions of Poland, which always disrupted and redistributed populations in Poland numerous times. Newcomers would be given the surname Novak.

Occupationally, the most common surname in the Polish language is Kowalski – smith. In Poland, the -ski suffix denotes descendent of. That said, our Polish John, Jan, would name his son Jan Janski. If Jan were Czech, the name would become Jan Jansky – both literally meaning John, son of John. In central Europe, like in other regions, the suffix is added to denote descent from someone or note – either simply a name or an occupation.

Taking my surname as an example, Standjofski, I have learned that it is a derivative of the more common surname Stankowski. Evidently, this literally means “descendent of Stanko” and is obviously Polish in origin, though there is no evidence of Polish descent in my DNA (yes I checked). The surname was likely forged, stolen, or translated into Polish from another language.

The History of European Names

As we’ve seen with our exemplification of John, many names are ubiquitously translated across Europe. The vehicle on which these names circulated the continent was that of the Christian faith, which also carried the practice of implementing full names into standard social practice.

The history of European names does not stop with occupational, geographical, and patronymic practice. The more languages one studies, the more broad one’s translation becomes for more broadly interpreted surnames. Understanding the geography, culture, and language of varying countries leaves much room for understanding the way their naming systems work. In many ways, European names are reflective of the cultures themselves.

10 Must-See Exhibitions in Europe This Year

17 Famous French Painters From The 17th Century You Must Know