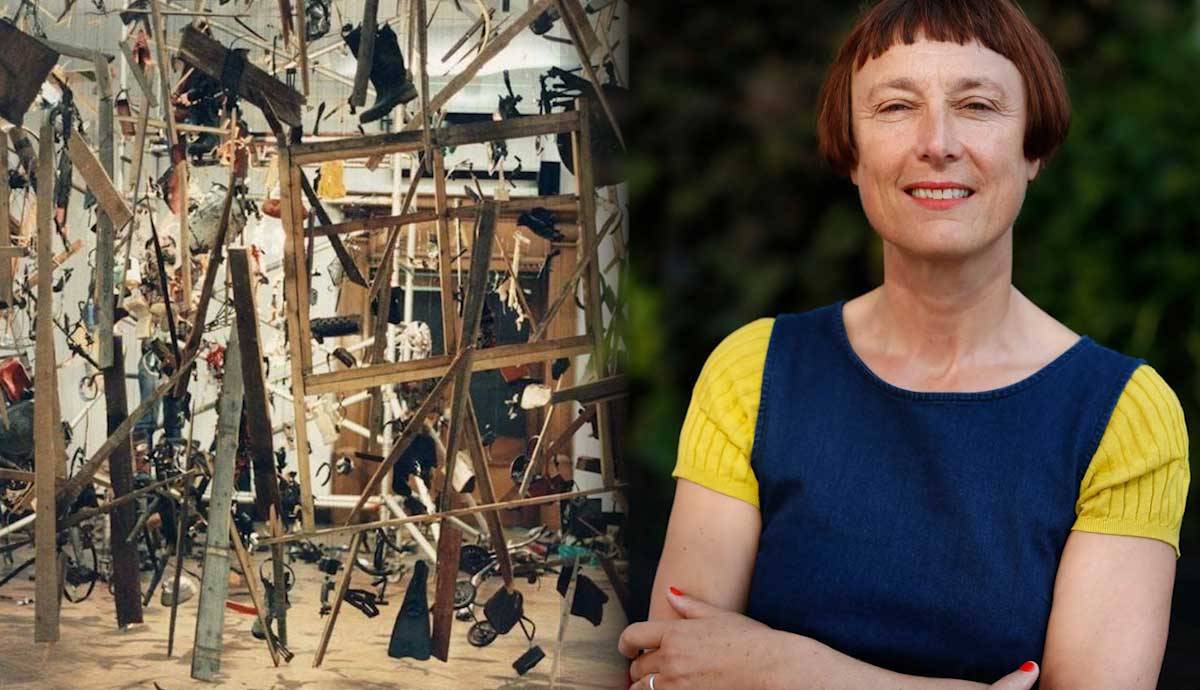 Cornelia Parker often uses everyday materials when creating her art. She destroys them, only to reassemble them into new mind-blowing installations. Her work is characterized and influenced by explosions, destruction, and death scenes from cartoons. Her pieces offer a new perspective on old and familiar things and show the viewer how destruction doesn’t have to mean the end of something, but rather a beginning. Read on to learn more about Cornelia Parker and her fascinating pieces!

Cornelia Parker grew up on a small farm in Cheshire. Her father was born on a smallholding in Cheshire and came from a long line of farm workers. The artist’s mother was a German au pair who met Cornelia Parker’s father while she was working at a house nearby. Even though Parker was one of three daughters, she was treated like a boy by her father since he needed someone to work with. When Parker was asked about her role as a woman artist, she said that she was not fond of her work being labeled as feminist because she wanted to be part of the mainstream. The artist said that she ignored her role as a woman since it was also ignored during her childhood. She described being treated like a surrogate son during her childhood. While her sisters were gifted dolls and lipsticks, she would get wellington boots and wheelbarrows. Her father used to have unpredictable angry outbursts which were disturbing to Parker.

Her childhood experiences shaped Parker’s desire to become an artist. The repetitive tasks of farming allowed little time to play, and Parker even had to sneak off to do so. For her, art offered the possibility of expressing herself freely and therefore seemed like a kind of grown-up play. Parker also mentioned that her family’s habit to reuse things due to a lack of money influenced the making of her artworks.

Creating Art out of Destruction

The work called Cold Dark Matter: An Exploded View features themes essential for Parker: explosion, destruction, and recreation. Cold Dark Matter began with the explosion of a garden shed. With the help of the British Army, Parker blew up a shed and turned the remaining pieces into a magnificent installation by reassembling them. The explosive power causing the destruction of the building is immortalized in an artwork that looks like a material snapshot of the exact moment of the explosion. With Cold Dark Matter Parker was able to communicate the idea of freezing an event that happened only during a split second.

In another work called Heart of Darkness, Cornelia Parker arranged the charred remains from a Florida wildfire to create an art installation. For her artwork Mass, Parker used the charcoaled remains of a church that was struck by lightning in 1997. When she heard about how black-congregation churches were destroyed by arson, she made another piece. Years later, the artist read about racially motivated bikers who burnt down a Baptist church in Kentucky. She later displayed the two works as a diptych at an exhibition in San Francisco. This way, it seemed as if the destroyed churches were resurrected. They rose from the ashes of natural disasters and racist violence as a new work of art.

Cornelia Parker’s Thirty Pieces of Silver features another act of destruction. The artist placed several cheaply bought silver objects on a concrete drive. A steamroller drove over them and crushed them all into flat little pieces. They were then hanged from the gallery ceiling. Crushing shiny objects is a fascination that accompanied Parker since her childhood. As a young girl, she would crush coins on a railway track and therefore make them into new objects. Parker said that the flattened coin can serve as physical proof of the destructive powers of the world.

Cartoons and the Exploded View

Parker’s work poses an essential question: What inspires her great interest in destruction and explosion? The artist explained that the idea of an explosion is very present in our society. An explosion might seem like an extraordinary event we rarely experience. Parker, though, sees it as something we are constantly confronted with in comics, cartoons, action films, documentaries about the Big Bang, and reports about wars.

The subject of cartoon violence or clichéd cartoon deaths is especially powerful in Parker’s art. Like in a cartoon, the objects in Parker’s works endure destruction, just to come back to life immediately, but in a new form. The consequences of violence in Tom and Jerry, for example, are not long-lasting. After an injury or death, the character’s body and life are renewed, and they go on as if nothing happened.

Parker’s work is also inspired by the imagery of the exploded view which can be found in old encyclopedias or assembly and maintenance manuals. The exploded view, like the one done by Leonardo da Vinci, shows a diagram or drawing of an object and how the different parts relate to each other and how to assemble it. Parker has always been fascinated by old encyclopedias that contain these exploded diagrams. Her piece Cold Dark Matter: An Exploded View directly refers to these images. The work displays a perfectly arranged view of the pieces that, when assembled, make up a complete garden shed. The dual meaning of Cold Dark Matter: An Exploded View becomes apparent when one considers that the title literally provides an exploded view of the shed mid-detonation.

Destruction and Reconstruction: Resurrecting the Destroyed

When Cornelia Parker said that her piece Thirty Pieces of Silver was not only about money and betrayal but also about death and resurrection, she did not necessarily mean to talk about the resurrection of Jesus Christ after he was betrayed by Judas for thirty pieces of silver. She rather referenced a resurrection of material. Usually, a resurrection is reserved only for a divine being or human who rises from the dead as part of a religious narrative. In Parker’s case though, it is the physical material that is being resurrected. Since Cornelia Parker grew up Catholic, her art could have been influenced by the Christian ideas of resurrection and transubstantiation, which is the change of one substance into another, such as bread and wine becoming the body and blood of Christ.

Parker uses material that has been destroyed, burned, or crushed, often by her own doing, and reconstructs it to create artworks. Even though her artwork represents a new constellation of the material, the matter is still the same. Her art constructs a paradox by making something completely new and often unrecognizable, like the works made of burnt churches, while still using the same material the object was made of before the altering destruction. The material takes on a new meaning while still maintaining and building upon the old meaning. Individual silver objects turn into one flat artwork showcasing the destructive powers of the world. The burnt remains of churches are resurrected in an abstract art installation. An exploded shed becomes a testament to the short moment of its own destruction.

The Meaning of Cornelia Parker’s Artworks

Many of Cornelia Parker’s works can be viewed from a personal or a much larger cosmic standpoint. The artist said that her work Cold Dark Matter: An Exploded View demonstrates aspects of the outside world as well as those of our psyche. Pieces like this one can remind the spectator of stellar constellations, the Big Bang, or the explosions happening in war zones that many people only ever experience through videos and photographs. But the exploded shed can also remind us of our everyday life, our private and psychological conflicts, and the violence we are familiar with. The shed used in her piece was filled with ordinary things such as toys, books, and tools, and is therefore almost a symbol of the explosions happening in our individual lives.

The name of the piece suggests a connection to the scientific term describing the matter in the universe we can neither see nor detect, but Parker offers a more personal approach. According to the artist, cold dark matter is in the universe, but it’s also in the mind. It is something that we are not able to see or detect, but it still exists and upsets us.

The silver used for Thirty Pieces of Silver can be seen as a representation of family heirlooms, things we collected, or traditions like biblical stories of Jesus and Judas we passed on. All those things are destroyed in the work, but they are also made into something new. Not only do the world and universe around us move on and build things out of destruction, but we do too. In her work Neither From Nor Towards, Parker used bricks that once formed a row of houses but then fell off the White Cliffs of Dover. It seems symbolic of the families who lived in houses like these, the troubles they had, and ultimately their and the buildings’ transience. The houses might be gone, but something new was created out of them. They have been resurrected like the burnt churches in her pieces.

Cornelia Parker’s art showcases those personal and global explosions and destructions and helps us make sense of them. Parker’s art often feels like a paused moment in a chaotic world full of change, destruction, and uncertainty. By looking at her works we can take a step back and examine our inner turmoil as well as the global crises, closely and calmly.