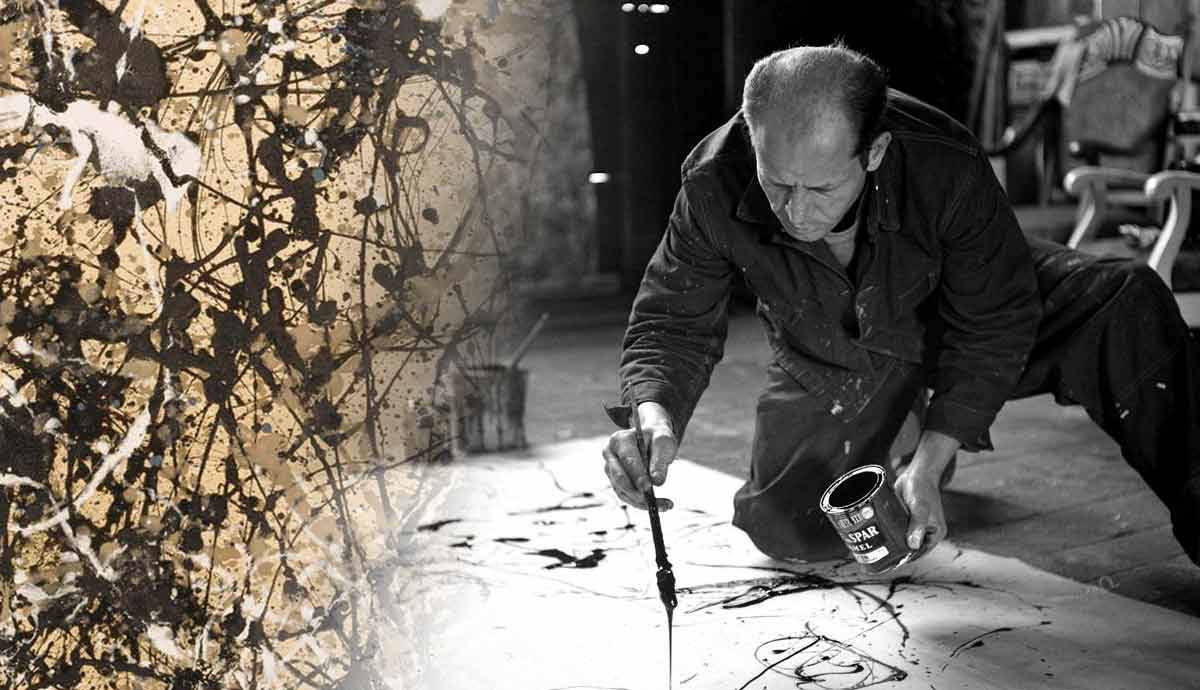 Jackson Pollock is the undisputed pioneer of New York’s Abstract Expressionist School. Throughout the 1950s he stunned audiences with his vast, mural-sized canvases streaked and scrawled with daring, expressive marks that seem to pulsate rhythmically across its surface. One of Pollock’s most celebrated paintings is Autumn Rhythm (Number 30), 1950, which is now in the Metropolitan Museum’s Collection in New York. But how did Jackson Pollock paint Autumn Rhythm? Looking at the techniques he used to make this painting can tell us much about his mature style, and the innovative processes he explored.

By the time Pollock painted the radical Autumn Rhythm, 1950, he had begun painting onto large pieces of raw, unstretched canvas. When creating Autumn Rhythm, Pollock laid a piece of canvas that was over 207 inches wide onto the huge floor of his studio. He moved around this epic surface area as he was painting, working at it from all sides, and even walking into the middle, thus breaking away from the traditional conventions of easel painting. It was this performative way of working that prompted the art critic Harold Rosenberg to dub Pollock and his peers ‘Action Painters.’ Because he was working on the floor, bits of rubbish, like cigarette butts and litter would make their way onto the surface and intermingle with the paint. These were no doubt removed once the finished canvas was stretched onto a final frame.

2. He Painted a Network of Black Lines in First

Although we see many layers of different, subtle colors in Autumn Rhythm, Pollock began this painting with a loose network of black lines that formed a starting framework on which to build further marks. Some art critics think that Pollock initially sketched out the abstracted forms of three figures with a series of swooping black marks, before layering over these in other colors. This suggests that Pollock’s art was only ever a few steps away from the real world. Although Autumn Rhythm might appear muted from a distance, closer inspection reveals a combination of various colors including black, white, beige and teal blue.

Pollock’s painting methods from the late 1940s onwards were experimental, expressive and improvised. He would flick, pour, splatter, dribble and even throw paint onto the canvas on the floor, moving rapidly around its surface as he worked. It was this surprising and unconventional approach that earned Pollock the nickname of “Jack the Dripper.” In Autumn Rhythm, the result was a rhythmical map of intricate lines that swoop and swirl through space, moving across the canvas in a way that mirrors the patterns of nature, as referenced in the artwork’s title. As with all Pollock’s mature work, there was no central area of focus – instead every surface of the canvas is treated in the same way.

The type of paint Pollock used was, unsurprisingly, equally as unconventional as his other methods. Autumn Rhythm was painted with household enamel paint, the sticky, glossy stuff you might normally put on patios, doors or radiators. Using this fluid type of paint (sometimes diluted) allowed Pollock to create his trademark loose, calligraphic marks, which would then dry with a hard shine finish, as if floating separately from the raw canvas behind them.

5. He Painted With Unusual Tools

Pollock adopted some pretty unconventional painting tools when making Autumn Rhythm and other similar works of art. He used sticks, trowels and knives to build up skeins of line and color, forming dense webs and networks that layer over one another to suggest movement and space. Sometimes he would mix paint directly onto the surface of the canvas with a trowel, or swirl and stir pools and puddles to open them up. If he did use brushes, Pollock would dip them into diluted paint and dribble from them, not allowing any bristles to touch the paper or leave any mark on the canvas. Instead, paint pooled and congealed in its own abstracted way, epitomizing the spontaneous freedom of the Abstract Expressionist style.

Who Was Clement Greenberg?