HomeArtistsThe Writing of John Cage: Stories on Silence and Mushrooms

The Writing of John Cage: Stories on Silence and Mushrooms

John Cage was one of the most influential American composers of the 20th century; apart from his exceptional musical compositions and artworks, he wrote short stories inspired by his life. 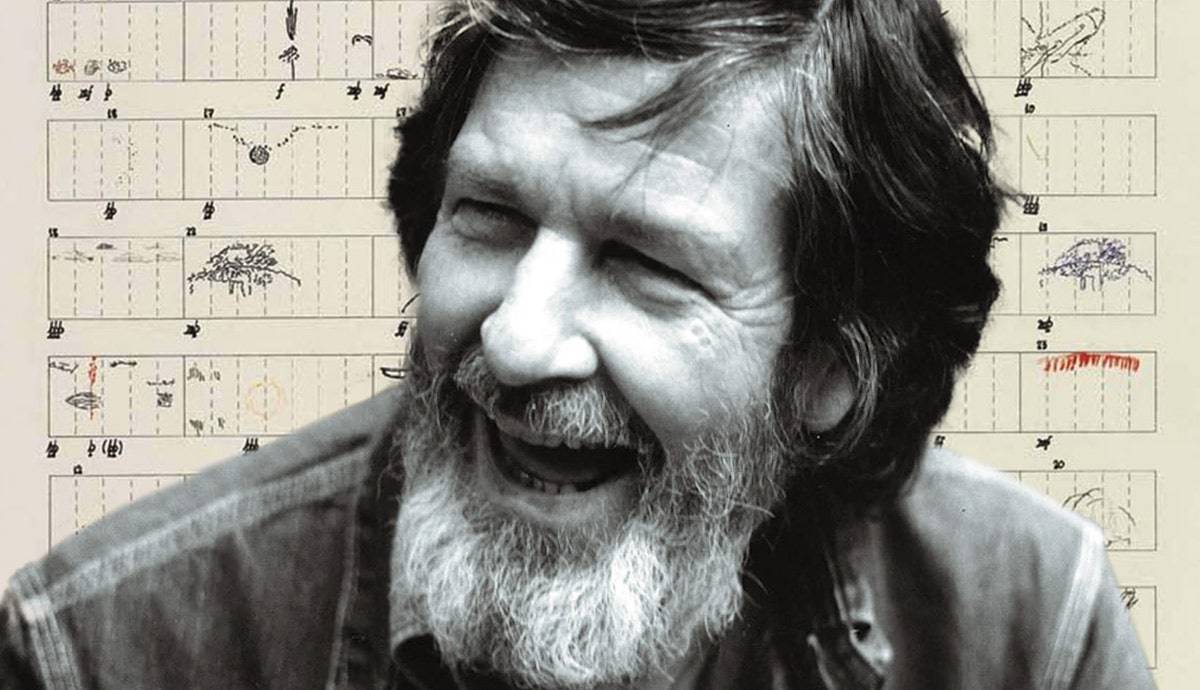 The experimental American composer and a pioneer in the field of aleatory music, John Cage was one of the most influential artists of the 20th century. His musical investigations and insights have inspired different practices in contemporary art. He was also a devoted Buddhist, a philosopher, and a writer. John Cage wrote short stories, like memoirs, inspired by his life. He used these short stories in several ways: as a score for a dance, as parts of his concerts, as lectures, or as art statements. Cage’s stories give a sense of Haiku poems. The stories were even inspired by Haiku. They can be surreal, playful, trivial, melancholic, incomprehensive, and wise.

The Life and Career of John Cage

“I was surprised when I came into Mother’s room

in the nursing home to see that the TV set was on. The program was
teenagers dancing to rock-and-roll.

John Cage was born in Los Angeles in 1912 and died in 1992, almost spanning through the whole 20th century and leaving his incredible mark on it. As a child, he had never dreamed of becoming a famous American composer. He dropped out of college early because he wouldn’t read the books everyone else was reading.

He sought a writer’s career and traveled to Europe for inspiration. While there, he got fascinated by the architecture and studied that for a while. However, he quit as he wasn’t keen on making a lifetime commitment to it. He turned to painting and composition instead.

When he finally returned to California, he realized that he wanted to devote his life to music. He studied near notable names, like Arnold Schoenberg, among others, before following his entirely idiosyncratic route where he engaged with visual arts and writing, amongst other creative expressions.

John Cage’s musical career was unique. From his prepared pianos (pianos in which he would place objects between their strings to alter their sound) to his event scores and the “silent” 4’33’’ composition, John Cage was always trying to take music to new and unknown paths. He was a loyal Buddhist throughout his life, so he always searched for ways to combine Buddhistic philosophy with his artistic practice.

He researched the idea of chance for producing music as a way to imitate nature in its mode of operation. Apart from being one of the most important American composers of the 20th century, his work had a huge influence on artistic movements like Fluxus and Happenings, Minimalism, and Conceptual Art.

The Complex Unity of Everything

When I got the letter from Jack Arends asking me to lecture at the Teachers College, I wrote back and said I’d be glad to, that all he had to do was let me know the date. He did. I then said to David Tudor, “The lecture is so soon that I don’t think I’ll be able to get all ninety stories written, in which case, now and then, I’ll just keep my trap shut.” He said, “That’ll be a relief.”
(Cage, 1965)

John Cage had an outstanding talent in oration since he was a child. Ιn a charming story of his, he narrates how he managed to keep the school’s Oration award by giving a speech he had not pre-planned. He just improvised.

One of the most charming elements of his creativity and, at the same time, utterly indicative of his pursuits is how he perceived and carried out his numerous lectures by inserting his stories into them. On various occasions, these lectures were given a structure analogous to the musical works he had been invited to speak of.

A typical case is a lecture-performance Indeterminacy: New aspects of form in instrumental and electronic music (1958). John Cage, although invited to talk about his work, made a collage of totally unrelated stories, talking of things that have happened to him, or that he had heard from friends.

In 1958, he presented 30 stories without musical accompaniment. In 1959, he gave the same lecture with another 60 stories, accompanied by his composition Music for piano and orchestra (1959) which was performed by the pianist and Cage’s collaborator David Tudor. During the live reading, the stories were told in order that Cage had remembered them. They were read at different speeds, depending on their extent.

As he says in his introduction of the lecture, his purpose in this whole process was to indicate that everything, however unconnected and irregular it may seem, is connected to other things. Sounds, events, people: they are all connected as a complexity, or rather as a complex unity. This unity of everything is brought out much better when no apparent relation between things is mentally imposed.

“In that silent room, I heard two sounds, one high and one low. Afterward, I asked the engineer in charge why, if the room was so silent, I had heard two sounds… He said, “The high one was your nervous system in operation. The low one was your blood in circulation.”
(Cage, 1966)

In 1951, John Cage visited the anechoic chamber of Harvard University. His visit revealed to him that even in a place where any kind of external sound is absorbed, the human ear keeps hearing specific internal sounds. Thus, as long as there is life, there are sounds too. This experience, along with Robert Rauschenberg’s empty “White Paintings,” led Cage to his famous work titled 4’33’’.

Silence represents an important chapter in John Cage’s career. His lectures, just like his scores, are full of pauses. He even mentioned pauses when talking about the American affairs when he was 14 years old in his speech that won the Southern California Oratorical Contest. “We should be hushed and silent, and we should have the opportunity to learn what other people think,” Cage said then.

Even at such a young age, before he knew what he wanted to do, the seeds of silence and the notion of its importance were all there. This idea of pause and silence, the indispensable time for contemplating, listening around, and reading between the lines and sounds, became a fundamental element of John Cage’s music and writing. Most of the stories seem like concrete poetry, full of voids that are expected to function the way pauses function in his musical compositions.

The American Composer and Mushrooms

Mushrooms represent one of Cage’s favorite subjects. John Cage began foraging during the Great Depression when he was still unknown and broke. In 1952, in a farmhouse near the forest, the American composer had a serious case of poisoning with mushrooms after which he decided to study everything about them. Perfectionist as Cage was, he ended up being an expert on them.

The special qualities of fungi, the rarity of some species, being so dangerous and precious revealing balances that transverse his life’s philosophy on chance and awareness, made mycology a critical chapter of John Cage’s wider research. That is why he sometimes used to take his music students on foraging.

In one of his stories, Cage narrates how a declaration of his love for botany as a field free from jealousies and selfish feelings that plague the arts ends up in polemics between famous mycologists.

John Cage’s knowledge of mycology became legendary. He gave lectures on the identification of mushrooms. He even made “The Mushroom Book” in 1972, together with Alexander H. Smith and the mycologist and illustrator Lois Long. Next to Long’s beautiful lithographs and photographs, there are anecdotes, poems, and drawings inspired by fungi.

Cage’s stories are full of collecting and eating mushrooms, and the funny, or not so funny, events that follow. In one of his more amusing stories, Cage is at a party, talking with famous mycologists and declaring that he loves botany because it is a field free from jealousies and selfishness. The story ends up with one of the mycologists expressing hostility towards a fellow botanist.

The Lure and Urgency of John Cage’s Stories Today

What makes Cage’s stories so easy-going and comforting to read is that they don’t push you to be engaged in anything. They feel like a soft breeze on a summer evening. Or like listening to the rain, or walking in the sand. You don’t have to put any effort into catching something profound in them. However, there is a shared quality in all of them. There is a call for confronting life and people with love, empathy, and indulgence. A call to be aware of the very essence of living.

What Cage as an American composer had constantly been researching with his musical experiments was a sound released by any connotations, an imminent sound carrying no representation but having its own value. That is precisely how his stories also work. They are not telling anything specific, but if you want to find something, it is there.

There are Cage’s stories about his parent’s comical cynicism, folk tales, a lot of mushrooms, toadstools, amanitas, and hellebores. Stories of his life partner Merce Cunningham, stories on his eccentric wife Xenia Andreyevna Kashevaroff, his Buddhist teacher Dr. D. T. Suzuki, and his humorous friend and collaborator David Tudor. There are dialogues with famous composers like Karlheinz Stockhausen and Schoenberg. In Cage’s stories, a mushroom exhibition is compared with an electronic music concert and mushroom experts with lion hunters. Phosphorescent fungi are used as hair ornaments, I Ching is giving business advice and an aunt confesses that she loves her washing machine more than her husband.

All these beautiful, funny, and strange stories can be found in several of his books or through reading his exciting correspondence.

John Cage’s stories are an ideal reading material when seeking calmness and consolation. They have the abstract and meditative form of the Haiku and Cage’s gentle aura of humanistic care and profound wisdom. They can comfort and relax the mind. As current health and environmental crises raise many questions about human vulnerability and nature, the great American composer’s key concept of interconnectivity seems more relevant than ever. As Cage said in 1965: “The truth is that everything causes everything else. We do not speak therefore of one thing causing another.”

By Gelly GryntakiBA Physics, MA Art Conservation, PhD Science & Contemporary ArtI am an art curator, writer and researcher, mother and feminist, reader and translator. I am interested in queer theory and gender performativity, posthumanism, science and science fiction, and artistic activism. I regard contemporary art as a multi-dimensional space where all those fields can intersect and interact. I hold a BA in Physics, an MA in Art Conservation, and a PhD in Science and Contemporary Art. I have collaborated with several institutions, media, and artists and I am a permanent contributor to the Greek issue of The Art Newspaper. Museums and bookshops are my favorite places.