After being gifted a camera, photographer Julia Margaret Cameron became one of the most celebrated portrait artists of the Victorian era. 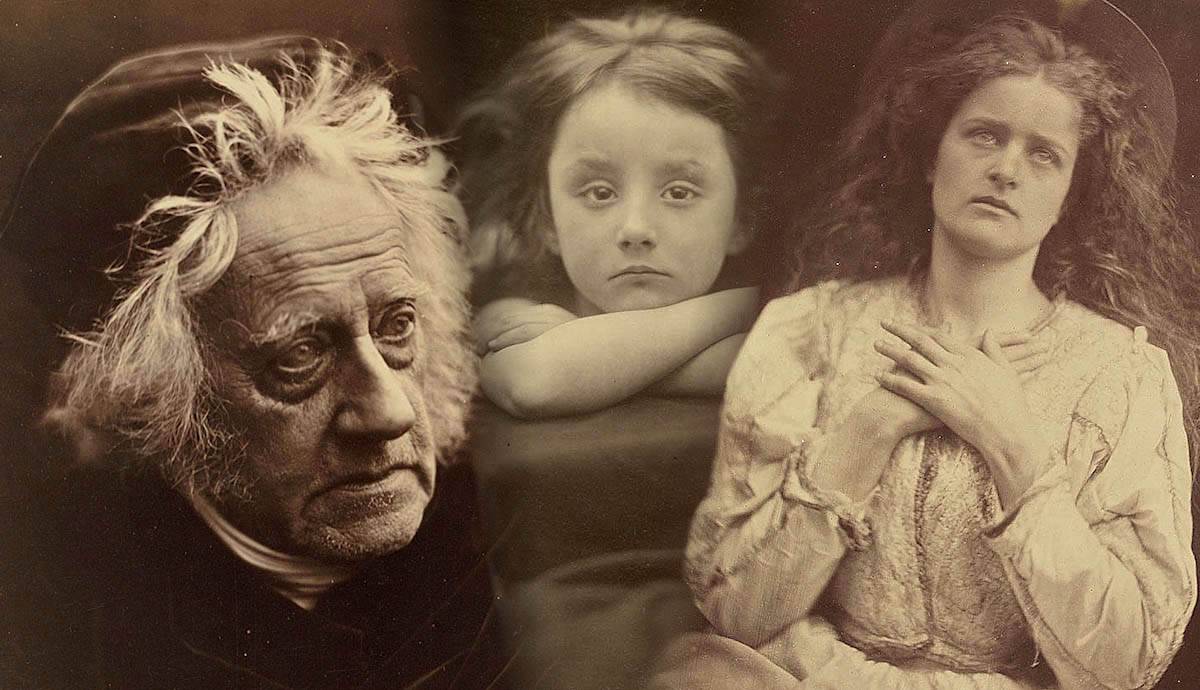 Julia Margaret Cameron was a 48-year-old mother of six when she made her very first photograph. Within a decade, she had already amassed a unique body of work that made her one of the most influential and enduring portraitists in Victorian-era Britain. Cameron is best known for her ethereal and evocative portraits of well-known contemporaries, many of which feature imaginative compositions and costumes. Read on to learn more about Julia Margaret Cameron and her amazing portrait photography.

Who Was Julia Margaret Cameron?

Julia Margaret Cameron was born to British parents in Calcutta, India, where she enjoyed an unconventional childhood with her siblings. She was educated in France and spent time recovering from illnesses in South Africa, where she met and married her husband. They had six children together before returning to Great Britain, where they enjoyed London’s bustling art scene. They settled in the village of Freshwater on the Isle of Wight, where Cameron launched her artistic career and frequently gathered with the cultural elite of the Victorian era. Despite pursuing photography later in her life, Julia Margaret Cameron helped prove that portrait photography was indeed a veritable fine art medium in a context where photography was not yet widely accepted as such. These are 7 facts about Cameron and 7 of her most fascinating photographs over the course of her unusual yet groundbreaking career as an artist.

1. The Advent Of Photography Inspired Cameron To Forge Her Own Path

The invention of the first commercially successful photography process is credited to Louis Daguerre, a French artist who unveiled the revolutionary Daguerreotype in 1839. Soon after, William Henry Fox Talbot invented a competing method: the calotype negative. By the 1850s, rapid technological advancements had made photography more accessible and affordable. The popular collodion process, which utilized glass photographic plates made of glass, facilitated both the high quality of the Daguerreotype and the reproducibility of the calotype negative. This was the primary photographic process used for several decades. When Julia Margaret Cameron began taking pictures in the 1860s, photography was largely defined by formal commercial studio portraits, elaborate high art narratives, or clinical scientific or documentary renderings. Cameron, on the other hand, forged her own path as a thoughtful and experimental portrait artist who happened to use a camera instead of paint.

In 1863 at the age of 48, Julia Margaret Cameron was gifted her very first sliding-box camera by her daughter and son-in-law to “amuse you, Mother, to try to photograph during your solitude.” The camera gave Cameron something to do as all her children were grown and her husband was often away on business. From that moment on, Cameron dedicated herself to mastering the difficult tasks of processing negatives and focusing on subjects in order to capture beauty. She also learned how to imbue the technological aspects of photography with a personal artistic touch that would make her one of the most beloved portrait artists of the Victorian era.

Cameron asserted herself as a fine artist even though photography was still not widely considered to be a serious art form. She wasted no time in marketing, exhibiting, and publishing her artistic photographs, and it wasn’t long before she was successfully exhibiting and selling prints of her photographs in London and abroad. Cameron considered her 1864 portrait of Annie Philpot to be her first successful work of art. It defies the Victorian era conventions of portrait photography with its deliberate emphasis on the child’s movement through blurred focus and intimate framing.

Julia Margaret Cameron described her unique goal as an artist in her unfinished memoir: “to ennoble Photography and to secure for it the character and uses of High Art by combining the real and the Ideal and sacrificing nothing of the Truth by all possible devotion to poetry and beauty.” (Cameron, 1874)

Impressed by Cameron’s artistic approach to photography, Alfred Lord Tennyson tasked Cameron with creating photographic illustrations of an edition of Idylls of the King, a highly-esteemed collection of Tennyson’s poetry that narrates the legends of King Arthur. Cameron created over 200 exposures for this project, carefully selecting the best compositions and ensuring the process of printing and distributing the images did her work justice. For The Parting of Lancelot and Guinevere, Cameron selected models whom she felt best represented the characters both physically and psychologically. She created dozens of negatives before achieving the final image, which depicts the lovers’ final embrace as narrated by Tennyson. The result is affectionate, evocative, and convincingly medieval—and it proved that artistic photography could measure up to the most beloved poetry of the century.

4. Cameron Turned A Chicken Coop Into A Photography Studio

Instead of pursuing the conventional route of opening up a commercial photography studio and accepting commissions, Julia Margaret Cameron converted a chicken coop on her property into her first studio space. She found that her passion and aptitude for photography flourished quickly, as did the support she received from friends and family. She described in her memoir how “the society of hens and chickens was soon exchanged for that of poets, prophets, painters and lovely maidens, who all, in turn, have immortalized the humble little farm erection” (Cameron, 1874).

Cameron constantly convinced friends, family members, and even her household staff to pose for photographs, fitting them in theatrical costumes and carefully composing them into scenes. Cameron looked to various literary, mythological, artistic, and religious sources—from Shakespeare plays and Arthurian legends to ancient myths and Biblical scenes. Time and time again, various acquaintances entered Cameron’s chicken coop and were transformed through the lens of the camera—rowdy neighborhood children became innocent putti angels, a trio of sisters became King Lear’s ill-fated daughters, and a housekeeper became a pious Madonna. Cameron’s young niece once aptly remarked, “We never knew what Aunt Julia was going to do next.”

5. Many Victorian Era Celebrities Were Photographed By Cameron

Julia Margaret Cameron often kept the company of Victorian-era celebrities in England, including famous scientists, artists, poets, and philosophers. From these friendships, Cameron expanded her intellectual horizons and expanded her portrait photography portfolio. One of Cameron’s most famous portraits is that of Sir John Herschel, a lifelong friend of the artist and a beloved innovator in the fields of science and photography. Visually, Cameron’s portrait of Herschel appears more like a Rembrandt painting than a typical Victorian-era photograph with its soft-focus, heroic gaze, physical realism, and classical costuming. Thoughtfully, Cameron endowed Herschel with the dignity and reverence she believed him to deserve as her personal friend and as an important intellectual figure.

Julia Margaret Cameron also made equally evocative and unusual portrait photographs of the poet Tennyson and the painter George Frederic Watts, abandoning the popular conventions of commercial portrait photography studios—with their rigid poses and detailed renderings—to capture the unique physical and psychological characteristics of her subjects. It is clear that Cameron made no distinction between thoughtfully rendering the qualities of Arthurian characters and real-life contemporary friends—an approach that makes her work timeless and emblematic of an era.

While she was successful as an artist, Julia Margaret Cameron’s work was not without controversy. After all, photography was brand-new, and any experimentation that ignored the key features of the medium was rarely met with open arms. Critics, especially other photographers, wrote off her out-of-focus aesthetic approach as her technical inability or, on the other hand, placed her artistic vision and approach low on the hierarchy of fine art. One condescending exhibition reviewer said of her work, “In these pictures, all that is good in photography has been neglected and the shortcomings of the art are prominently exhibited.” Despite the criticism, Julia Margaret Cameron’s experimental style was beloved by her patrons, friends, and fellow artists. Her controversial efforts to bridge the gap between technology and art contributed to how we view photography as an artistic medium today.

While Cameron’s artistic innovations were certainly unique, she was not working alone. Cameron’s more imaginative, narrative portraits visually and thematically align with the Victorian era artists of the Pre-Raphaelite Brotherhood and the Aesthetic Movement, many of whom she considered friends. Like these fellow artists, Cameron was drawn to the notion of “art for art’s sake” and many of the same subjects, themes, and ideas derived from medieval aesthetics and stories, famous historical masterpieces, and Romantic poetry and music.

Cameron once said, “Beauty, you’re under arrest. I have a camera and I’m not afraid to use it.” In just over a decade of work, Julia Margaret Cameron produced nearly one thousand portraits. By fearlessly persevering amidst criticism and experimenting with new technology in her later years, Cameron became one of the most enduring portrait photography artists of the nineteenth century. She inspired various artistic movements of her generation and beyond to embrace photography as a fine art medium.