HomeArtistsRembrandt: From Rags To Riches And Back Again

There is undeniable romance to the tale of a great but misunderstood artist, whose fame arrives only after a tragic, penniless death. 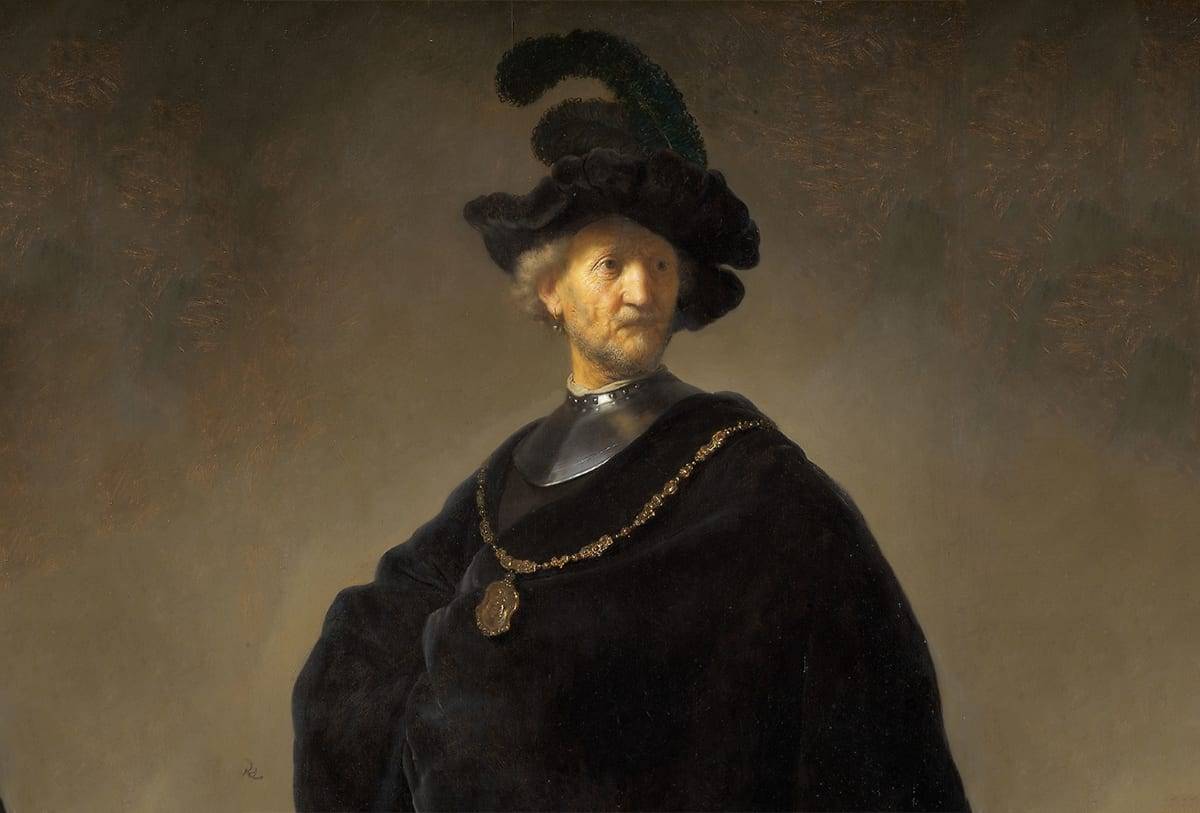 The man who signed his work with just his forename belongs to that other camp of great artists—those whose talents were so blinding as to attract acclaim in their own day.

As a painter, etcher, and draughtsman, Rembrandt is a sun among the stars of the Dutch Golden Age. Then as now, he was considered among the most skilled artists of all time. Despite the enormous success, however, the Dutchman would see his coffers emptied, his once-booming workshop closed, and his home and possessions auctioned off before the end. Here’s the story of Rembrandt Harmenszoon van Rijn.

From Leiden to Amsterdam

Rembrandt was born in 1606 to a miller and a baker’s daughter in Leiden, the textile capital of the Dutch Republic. After apprenticing with a local artist for years, young Rembrandt traveled to Amsterdam, the epicenter of seventeenth-century Dutch art.

In Amsterdam, Rembrandt spent six months under the tutelage of Pieter Lastman. However brief, this second apprenticeship would have a profound and lasting impact on the aspiring artist. Like Lastman, Rembrandt had a talent for bringing religious and mythological narratives to life.

For Lastman as for Rembrandt, such scenes were wrought across rich, glistening surfaces through the nimble manipulation of light and shadow. Rembrandt’s masterful chiaroscuro—alternately subtle and dramatic—became a stylistic hallmark.

A formidable draughtsman, Rembrandt possessed a natural fluidity of line and feel for a form that shines through all three of his chosen media. In his paintings, he deftly layered thin glosses of oil paint to create depth and luminosity, giving his work the illusion of being lit from within. He ignited this technical prowess through bold compositional choices and a flair for visual storytelling.

Upon leaving Lastman’s workshop, Rembrandt set up an independent studio and started taking on his own apprentices. He quickly rivaled Amsterdam’s finest in skill and renown, enjoying the eager patronage of the city’s wealthy, prominent citizens. Before long, Rembrandt had attracted the attention of Prince Frederick Hendrik, the Dutch stadholder.

Most remarkable, perhaps, is Rembrandt’s unique mastery of psychological complexity, his knack for making visible the nuanced depths of a figure’s inner world. His uncanny ability to convey emotion in the faces of his subjects is heightened by his radical naturalism.

The combination rendered him an unparalleled master of portraiture. Judging by Rembrandt’s large number of commissioned individual and group portraits, this talent was widely recognized.

Before long, however, mere mastery was not enough for Rembrandt. He began to revolutionize the genre. A 1632 commission from the Surgeon’s Guild, The Anatomy Lesson of Dr. Nicolaes Tulp, marked a radical break from tradition. Instead of depicting the subjects in neat rows with equal weight and even expression, Rembrandt painted the group mid-dissection in a dramatic mise-en-scéne.

At the center of the dynamic composition, a Christ-like cadaver extends into the foreground. Dr. Tulp brandishes a pair of forceps to ply the musculature from the corpse’s forearm. In later group portraits, Rembrandt pushed the envelope further, continually expanding the realm of possibilities for the genre.

Rembrandt had an infamous proclivity for self-portraiture. Almost fifty such paintings are known today, and the total doubles if you include his drawings and etchings. Some scholars argue that the self-portraits were a mode of internal study toward the acquisition of self-knowledge. Others hypothesize that they were visual studies intended to refine his rendering of emotion.

Still, others contend that the works were painted to meet market demand. Whatever their intended purpose, the self-portraits span Rembrandt’s entire career, telling the story of a young man seeking confidence and identity, who finds fame, success, and all their respective trappings. The late self-portraits twist the narrative, displaying a world-weary man gazing back at his life and self with punishing honesty.

The years between 1643 and 1652 saw a less prolific Rembrandt, one whose production was largely limited to drawings and etchings. What few paintings emerge from this period feature drastically varying styles. The sudden shift in output points to a crisis, be it personal or artistic.

Was it grief that sparked Rembrandt’s draught? The 1642 death of his wife, Saskia van Uylenburgh, appears to have affected him deeply. A year before her death, Saskia gave birth to Titus van Rijn after losing three previous children in infancy. Rembrandt’s last major painting before his decade-long hiatus is among his most famous: The Night Watch.

The enigmatic masterpiece contains the strange figure of a young blonde girl running through the militia members. The luminous youth adorned in gold is almost certainly a portrait of the late Saskia. A shadowy figure in an artist’s beret, likely a self-portrait, peers over a shoulder just above Saskia.

Domestic and legal strife followed on the coattails of Rembrandt’s loss. Geertje Dirckx, former housekeeper to Rembrandt and nursemaid to Titus, contended that the artist had seduced her under a broken promise of marriage.

The situation escalated until 1649 when Rembrandt had Geertje confined to a women’s prison. He took his next housekeeper, Hendrickje Stoffels, as his common-law wife.

Hendrickje, who was twenty years Rembrandt’s junior, is thought to be the model for the 1654 Bathsheba at Her Bath. Fittingly, the protagonist in this narrative of extramarital desire was the mother of the artist’s illegitimate child.

When Rembrandt returned to painting, he did so with vigor. In quantity and quality, he held nothing back, proving more prolific and inventive than ever. Thin-oil glazes gave way to thick, crusty layers of paint. Rembrandt’s impasto technique was accompanied by marked spontaneity. He turned toward painterliness, favoring loose, expressive application of medium over tightly controlled strokes. The transformation, however, was only partial. Rembrandt flexed his ability to layer smooth, luminous films alongside emotive movement and textured impasto until the bitter end.

The effects of light and shadow are even more dramatic in Rembrandt’s mature phase, but they play by different rules. Indeed, his mature chiaroscuro seems bound by no logic at all. Illumination becomes supernatural, cloaking the late work in a luminescent veil of mystery.

The Conspiracy Claudius Civilis from 1661-1662 is a rough-hewn masterpiece of chiaroscuro and impasto. Presiding over the shadowy scene is the one-eyed Civilis, towering over his unsavory compatriots and wielding a primitive saber. An otherworldly glow rises from the stone slab—the locus of the Batavians’ fateful pact—puncturing the scene’s oppressive tenebrism.

A habitual spendthrift, Rembrandt began to drown in debt during his fifties. Portrait commissions dried up, either by choice or by chance. His extravagant home and lavish possessions were auctioned off in 1655 after the artist failed to make payments. Rembrandt went officially bankrupt in 1656. He died penniless in 1669.

Artist As A Collector
Rembrandt was himself an avid collector. We know from an inventory of his assets that he built an impressive kunstkamer or “cabinet of curiosities” of naturalia and artificialia ranging from exotic shells to Mughal miniatures.

Several of these remarkable objects appear as props in Rembrandt’s paintings. Visitors to the Rembrandt House Museum in Amsterdam can view a reconstruction of the artist’s personal collection.

Sacred Art
The son of a Catholic and a Protestant, Rembrandt lived during a time of religious turmoil in the century following the Reformation. While the artist’s own religious affiliation remains unknown, there can be no doubt that Christianity features heavily in his oeuvre.

Biblical themes weave throughout his large-scale paintings, individual portraits, and even self-portraits. Whether this trend was driven by market demand or personal religiosity, however, remains unclear.

A Famous Heist
Rembrandt’s only seascape, Christ in the Storm on the Sea of Galilee, was acquired at the turn of the twentieth century by American heiress and collector Isabella Stewart Gardner. In her will, Mrs. Gardner stipulated that her Venetian-style palace in Boston be turned into a museum for her personal collection.

In 1990, two men entered the Gardner Museum disguised as police officers and cut Rembrandt’s seascape out of its frame. The thieves escaped with a total of thirteen works valued at $500 million, including others by Vermeer, Manet, and Degas. Two other Rembrandts—a painted double portrait and an etched self-portrait—were also stolen.

By Cara WolahanMA History of Art & Architecture, BA Art HistoryI am a contributing writer with a passion for art, history, and their ever-rewarding intersection. I hold an MA in the History of Art & Architecture from Boston University and a BA in Art History from Boston College. In my free time, I enjoy writing historical fiction stories about fascinating figures and objects. When I am not careening down research wormholes, I moonlight as a yoga teacher in Boston, MA, where I live with my fiancé and dog.

Who Stole Rembrandt’s Painting ‘Storm on the Sea of Galilee’?

10 Art Heists That Are Better Than Fiction