Brutal, direct, and intimate, Rembrandt’s self-portraits offer a fascinating window into his private world, chronicling the many ups and downs of his long and complicated life. 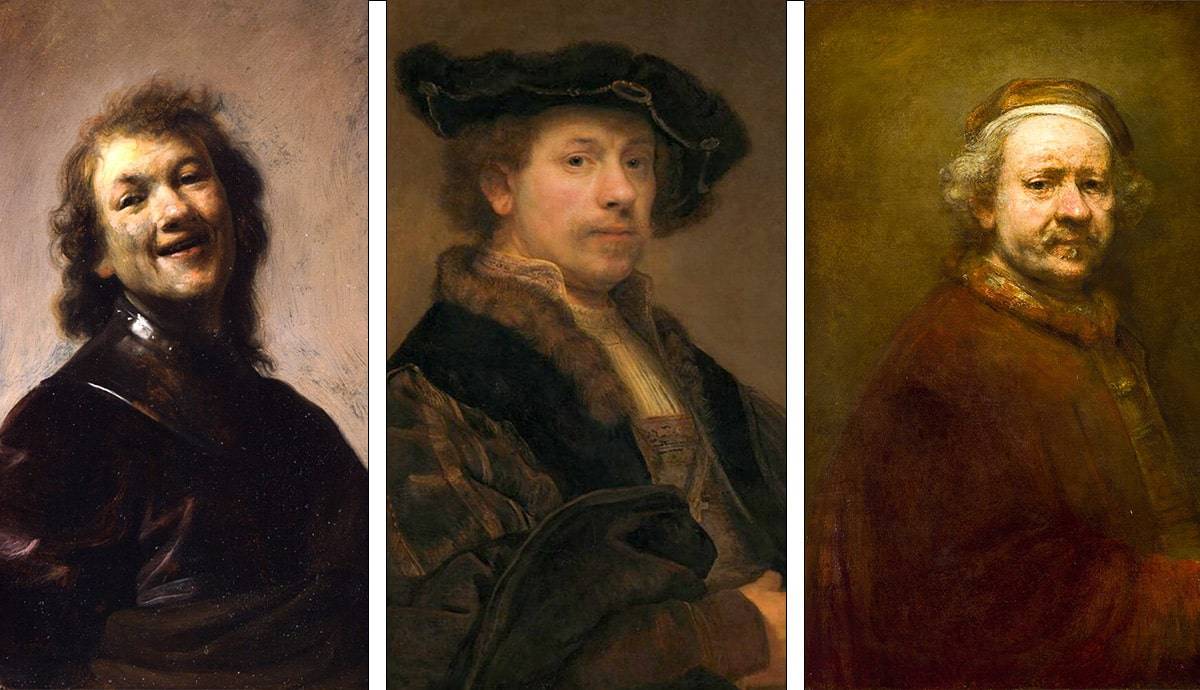 Rembrandt Harmenszoon van Rijn was one of the greatest painters of the Dutch Golden Age, whose prolific career spanned a vast range of genres, including history painting, Biblical subjects, landscape, and portraiture. Self-portraits were a constant throughout his 40-year career; he sketched, painted, and printed around 100 different versions of his own face, each one revealing a different side to his complex character. In his trademark palette of soft browns and caramel shades, Rembrandt documented his face as it aged through time, from the fresh-faced playfulness of youth to his careworn old age.

Unlike many of the other artworks he made for private clients, the majority of Rembrandt’s self-portraits were for his own personal archive, making them all the more honest and intimate. He undoubtedly studied the lines and contours of his face as an academic exercise, but Rembrandt’s self-portraits also tell us much about his difficult life story as it unfolded, moving through the ups and downs of love, loss, bankruptcy, and bereavement. Let’s take a look at some of the most memorable examples through the years.

Rembrandt Laughing, 1628 was made when the artist was around 21, but he already reveals the skill and ambition of a man destined for success. Having just established his own painting studio in Leiden, Holland, Rembrandt was ready to show off his artistic skills to potential future clients. Capturing his own face mid-laughter was a clever marketing strategy that not only demonstrated his precocious talent but also revealed Rembrandt to be a playful and confident character that people would enjoy working with. In Rembrandt’s self-portraits, he often enjoyed dressing up in expensive costumes. Here, he stages himself as a soldier dressed in a dramatic, dark uniform to give him an air of authority.

Rembrandt’s Self Portrait, 1628 captures a young man on the brink of adulthood at 23 years old, with youthful plump skin and wild, unruly hair. Dramatic backlighting casts his face into obscuring shadow, as highlights catch the tip of his nose and wisps of his hair, demonstrating the artist’s early fascination with chiaroscuro modelling effects that would play out in his most famous large paintings. This painting was likely to be a showpiece aimed at attracting future clients, and it demonstrates the scope and ambition of the young Rembrandt at the start of his long and successful career.

In Rembrandt’s striking Self Portrait in a Cap, Open Mouthed, 1630, the artist’s playful spirit almost jumps out from the page towards us. He conveys himself with bulging eyes and pursed lips, staring out at the viewer with a confident look of intent. In many of Rembrandt’s self-portraits of this time, he experimented with challenging facial expressions, treating his own face as a readily available tool for artistic exploration. This image demonstrates how he captured his features in an unidealized, honest manner, and was unafraid of making himself look ridiculous or foolish in the process. Here Rembrandt also plays with the visual effects of costume, styling himself in a large cap to hold down his trademark curly mop of hair.

In Rembrandt’s Portrait of the Artist as a Young Man, 1631, the artist oozes a cool air of confidence, reflecting his growing maturity and advancing career. Though this work is softer, hazier, and more subdued than his earlier portraits, the stark shaft of light on Rembrandt’s face coupled with his intense, penetrating gaze make this one of his most striking self-portraits ever made. By now the artist had married the wealthy Saskia van Uylenburgh and he would set up an independent studio in Amsterdam from where he earned large-scale commissions with wealthy clients. This changing fortune is reflected in Rembrandt’s clothing – he wears a fur-trimmed cloak draped with a gold chain, styling himself as one of Amsterdam’s most prestigious painters. The lavish costume here reflects Rembrandt’s growing taste for the finer things in life, and he was often accused by his wife’s family of squandering their family fortune on frivolities. However, this indulgent act of self-promotion must have worked in Rembrandt’s favor, as this painting eventually made its way into the collection of King Charles I in England.

In Rembrandt’s grand Self Portrait age 34, 1640, we see how the boy has now become a man – gone are the boyish curls and cheeky expressions, and in their place is an air of serious, contemplative maturity. Yet the same penetrating eyes peer out at us from the dark, shadowy depths of the painting’s interior, and we can recognise the artist’s distinctive nose as it catches a sliver of light from beyond the scene. The staging of this portrait was based on a painting by Titian in 1512, suggesting Rembrandt saw himself in the same vein as his great Italian forefather. However, there is also a hint of agony lingering in the artist’s sad eyes, reflecting the tragedy that had struck his early years of marriage in his Amsterdam home and studio. He and Saskia had tragically lost three children at an early age by the time this painting was made. Eventually Saskia gave birth to a healthy boy in 1641, but tragically, she would die herself in 1642, leaving Rembrandt alone with his young son.

By the time Rembrandt painted Self Portrait Aged 51 Years, 1657 he was a changed man. The grief of losing his beloved wife in 1642 prevented him from painting for a whole two years, while he didn’t make another self-portrait for another ten years. In the 1650s, Rembrandt’s self-portraits that eventually emerged took on a new darker and more somber tone, reflecting much about how the artist now saw himself. Just one year before he made this painting, Rembrandt was forced to file for bankruptcy as a result of his ostentatious living, particularly his penchant for expensive props and costumes to aid his paintings. An inventory of the objects gathered from his home at the time included all manner of items including ancient sculptures, Italian Renaissance paintings, weapons, and armor. In this portrait, the weight of this hard-lived life marred by grief and poverty is etched deep into the lines and furrows of Rembrandt’s careworn face.

Unlike the hazy, softly defined features of his earlier paintings, this work has a sharp, photographic attention to detail, demonstrating the technical mastery of painting that Rembrandt had achieved as a mature artist. The texture of wrinkled skin is tantalisingly real, forming puckered creases around his pained expression as he peers out of the shadowy darkness, demonstrating the artist’s growing fascination with the way time and experience affects one’s inner state of mind. Of all Rembrandt’s self-portraits, this is by far the most harrowing, painful, and confrontational, a brutally honest depiction of a man on the brink of breakdown.

Rembrandt’s Self Portrait at the Age of 63, 1669 was one of the last self-portraits he would ever make before his death later the same year. His late self-portraits became an intensive exploration into his psychological state of mind, and this painting is no exception; pain tinges the corners of his eyes, while slumped shoulders and clasped hands suggest an air of resigned acceptance to the passing ravages of time. Wrinkles, pale, puffy skin, and gray hair are painted with a brutal, direct honesty that lays the artist entirely bare, and it is this humane quality of self-acceptance that has made Rembrandt’s self-portraits so celebrated and influential through the centuries.

The Long-Lasting Influence of Rembrandt’s Self-Portraits

Rembrandt’s richly complex archive of self-portraits have offered artists many avenues of exploration over the centuries, and they continue to exert an influence today. Many 19th century European artists were fascinated by the psychological intensity of Rembrandt’s late self-portraits, including Vincent van Gogh and Edvard Munch, who, like Rembrandt, conveyed inner turmoil and troubled states of mind. 20th century Mexican artist Frida Kahlo dedicated her entire life to the act of self-examination, laying bare her ongoing health struggles with a painfully direct language that continued in Rembrandt’s legacy. More recently, British painter Jenny Saville places an emphasis on the raw physicality of her own flesh, exploring how thick passages of paint can convey its three-dimensional tactility, while British artist Tracey Emin has made a career out of exposing intimate aspects of her life to the world.

Here Are 7 Greek Armor and Weapons From Mycenaean Civilization