HomeAnswersWho Stole Rembrandt’s Painting ‘Storm on the Sea of Galilee’?

Who Stole Rembrandt’s Painting ‘Storm on the Sea of Galilee’? 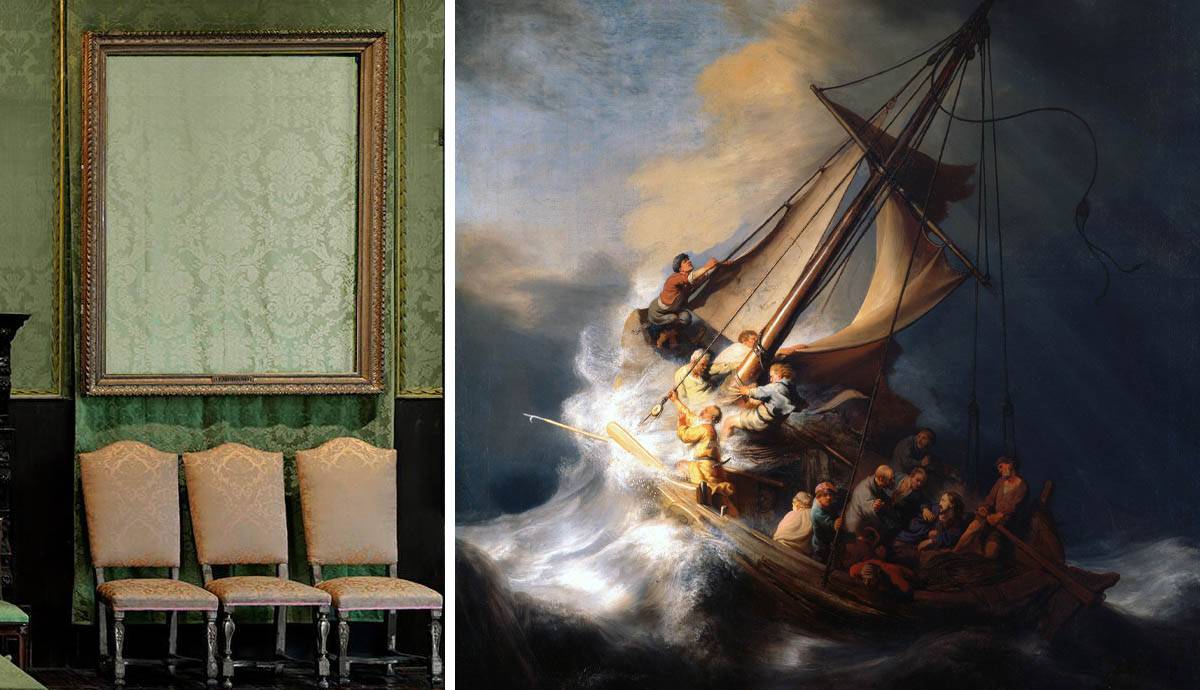 Rembrandt van Rijn is the most important painter of the Dutch Golden Age. Since then, Rembrandt’s paintings have become icons in the history of art. He is particularly renowned for his ability to capture dramatic chiaroscuro lighting, imbuing his art with brewing qualities of mysterious wonder. One of his best-known paintings is Christ in the Storm on the Sea of Galilee, 1633, painted when he was just 29 years old. In 1990 Rembrandt’s painting was stolen along with 12 others from the Isabella Stewart Gardner Museum in Boston, and it was never found again. It was one of the largest heists in US history. So, who stole this rare work of art, and how did they get away with it?

Incredibly, two men posing as police officers entered the Isabella Stewart Gardner Museum in Boston in the early hours of the morning, pretending they were responding to a threat in security. The museum’s security staff, who let the fake officers in, were promptly tied up in a room while the men set about stealing 13 works of art. Along with Rembrandt’s painting, they also took artworks by some of art history’s biggest names, including Edouard Manet, Edgar Degas and Johannes Vermeer.

Together the value of these artworks has been estimated at around $500 million – phew! Rembrandt’s painting The Storm on the The Sea of Galilee was the museum’s pride and joy, making it all the more shocking that it was stolen from under their noses. Sadly, none of the artworks have been retrieved, and museum staff are still obsessed with trying to find out who took them and where they went.

They Cut the Paintings From Their Frames

One question many have asked is, how exactly did the criminals get these paintings out of the building? They managed to do this by taking the works of art off the wall and cutting the paintings from their frames. Today, the empty frames where the stolen paintings once hung are still there on the museum’s walls as an emblem of what once was, and in the hope that they may once again return to their true home sometime in the future.

The FBI Launched an Investigation, But the Thieves Who Stole Rembrandt’s Painting Have Never Been Found

Because of the high value of the paintings that were stolen (Rembrandt’s painting was one of the rarest and most valuable), the FBI launched an investigation in an attempt to find the criminals. They even offered a reward of $5 million dollars for any leads that might help them proceed. In 2013, various articles were published suggesting the criminals had been found, and Richard DesLauriers, the special agent in charge of the FBI in Boston issued a statement claiming, “We have identified the thieves who are members of a criminal organization with a base in the mid-Atlantic states and New England.”

Unfortunately, this investigation never came to fruition, and the hunt for Rembrandt’s painting and all the others still continues. In an interview with The Art Newspaper, Anthony Amore, chief of security at the Gardner Museum said, “I’m still wildly obsessed, more than ever. I constantly think about those paintings.”

One theory that has been widely circulated is that the thieves who stole these paintings were local mobsters. If so, there’s a chance they might have taken the artworks to be sold on in the black market. In fact, in the home of a former mobster by the name of Robert Gentile a list of the Gardner Museum paintings was found a few years ago, with black market prices listed next to them.

Gentile denied any involvement, claiming he was framed. More recently, evidence has suggested there might be a link between the murder of career criminal Jimmy Marks and the Gardner heist. But so far, this is only one of around 30,000 different leads that the police have explored in a desperate but futile attempt to find Rembrandt’s painting The Storm on the Sea of Galilee and the criminals who took it. The heist remains to this day one of the most prominent unsolved art crimes in history. So, if you know anything at all, you might want to contact the FBI; there’s a reward in it.