During the 17th century, landscape painting became a popular genre. Dutch painters showed unprecedented interest and made it an autonomous subject in painting. 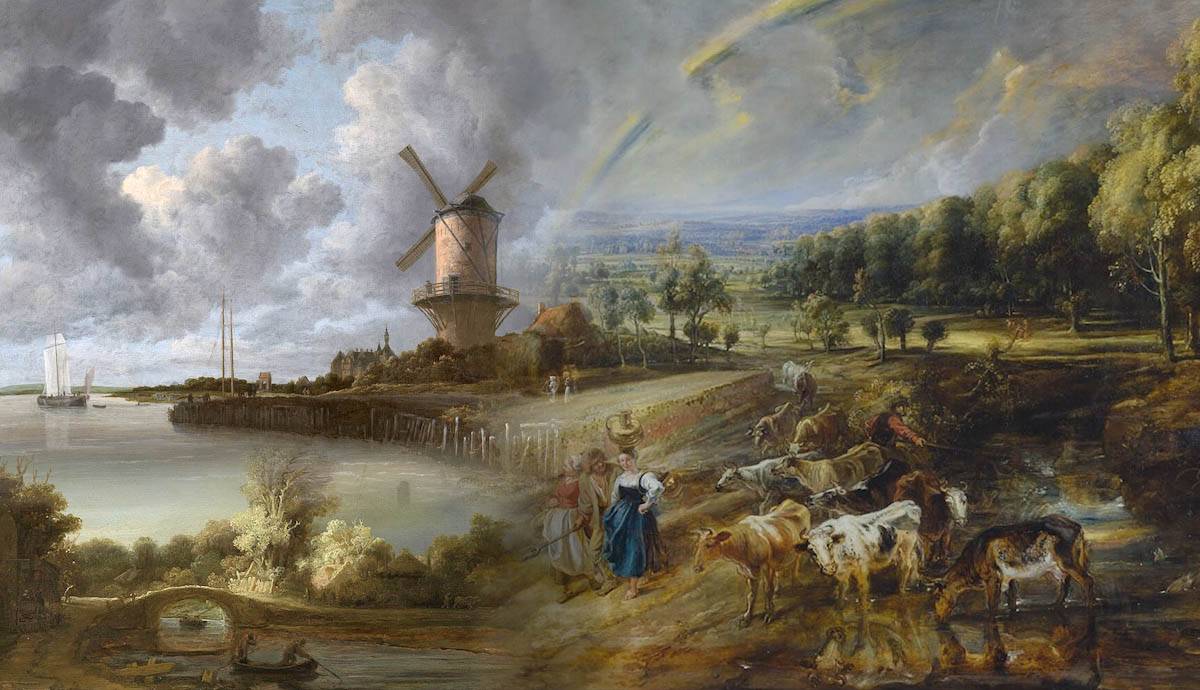 Landscape painting was one of the favorite genres in 17th-century art. It emerged from the Dutch Republic, which declared independence from Spain in 1648. The growth of capitalism and the wealth of the country in the need for a new national identity led to a revolution in painting, known as the Dutch Golden Age. Many Dutch painters were known for their realistic depictions of landscapes that were distinctly different from earlier periods. Dutch landscape painting is overall characterized by dramatic contrasts of light and shadow, cold and warm colors, calm and turbulent emotions, solid and liquid elements, and static and dynamic energy. Winter landscapes, sunsets, rural scenes with animals, seas, rivers, city landscapes, forests: all of these had a wide appeal to Dutch painters. For them, the natural landscape had such greatness and charm.

1) Jacob van Ruisdael: The Most Influential Among the Dutch Painters

Born in Haarlem, Netherlands, in 1628, Jacob van Ruisdael is considered one of the greatest Dutch painters that focused on painting landscapes. His works are characterized by various types of landscapes, from winter and dramatic forest scenes to river landscapes and panoramic views of Haarlem. He used to depict landscapes with windmills, canals, waterfalls, rivers, hills, and castles in melancholic atmospheres.

One of the most emblematic works of 17th-century art in the Dutch Republic is Ruisdael’s Windmill at Wijk Bij Duurstede. Windmills are very prominent in Dutch Golden Age art, symbolizing Dutch prosperity. This landscape features a compact windmill in the city of Wijk Bij Duurstede that rises in the vast, melancholic sky. Ruisdael has painted out looming, heavy clouds in the sky,  creating dramatic visual tension. The smoke from the chimney and the clouds that are breaking through the sunlight, filling the scene with character and emotion. This painting expresses the pride of the Ruisdael for his nation through the prominence of the windmill, a symbol of the Dutch Republic.

Peter Paul Rubens was one of the great international figures in 17th-century European art. The well-known Flemish artist and his extraordinary talent marked the entire Baroque era. At an early age, he traveled to Italy, where he became influenced by the works of great Renaissance painters including Titian, Raphael, Leonardo da Vinci, and Michelangelo. These artistic influences and the knowledge of Renaissance classicism and ancient history shaped the style Rubens is known for. Mainly, his subjects derive from religion, history, and mythology.

Ruben’s paintings stand out for the Venetian rich colors, the lush brush strokes, and the contrasting use of light and dark. In the last years of his life, Rubens started to paint landscapes for his own enjoyment. In the landscape painting The Rainbow Landscape, Rubens created a fertile scene. He combined brown, green, and blue tones to add depth to the painting. The glow of the rainbow in the sky that breaks through the delicately handled trees in the background seems to be a symbol of hope and calm. Also, the rainbow can be interpreted as a sign of God’s protection of mankind referring to the Old Testament.

Meindert Hobbema was born in 1638 and spent the majority of his life in Amsterdam. He was a pupil of Jacob van Ruisdael, who had a profound impact on his artistic development. Unlike his teacher who explored dark and moody landscapes, Hobbema had another approach. His landscape paintings were sunny, bright, and peaceful. Even their depiction of trees is different.

Ruisdael prefers bushy, solid masses, while Hobbema chooses thin trees with great detail. However, Hobbema keeps the contrasts of light and shade and the cloud formations, reflecting the landscape paintings of Ruisdael. Hobbema specialized in wooded landscapes, which are often structured around stands of woods and hedges, trees, watermills, cottage houses, and hills. His landscapes are carefully composed from his imagination. The Avenue at Middelharnis features a delicate landscape with a partly cloudy sky, tall, narrow trees, and a long road. The painting exudes calmness and tranquility, contrary to the typical turbulent and disorganized landscapes of other Dutch painters.

Rembrandt is regarded as the greatest Dutch painter of all time. He lived between 1606 and 1669. Unlike many other Dutch painters in the Golden Age, he never left the Dutch Republic. The golden age of Dutch landscape painting of 17th-century art promoted a group of talented artists, including Rembrandt, who captured in their paintings the Dutch countryside. Although this Dutch painter is best known for his realistic and dramatic portraits,  he also made some exceptional landscape paintings. Landscape with a Stone Bridge is one of the nine landscape paintings Rembrandt created. He chose to paint a river with small boats, solitary figures, a stone bridge, and trees in a mesmerizing atmosphere, illuminated from multiple light sources.

The way Rembrandt utilizes the proportions, the dark tones, and the contrasts of light is exceptional. There is a strong diagonal division of light and dark tones. Most of the dark tones are on the top right and most of the lights are on the bottom left. The mystical landscape is dominated by grey strokes of paint in the sky and a river that looks like a black mass. Rembrandt uses his imagination and makes an ordinary scene of the 17th century look dramatic and intense.

Born on January 13, 1596, Jan van Goyen began his training as an artist in his native city of Leiden at a very young age.  He studied under six different masters and he traveled regularly throughout the Netherlands. During the Baroque period, the Dutch painter studied the countryside. He created narrative landscapes and seascapes, which characterized 17th-century art. In the 1630s Van Goyen developed a new approach to landscape painting that focused on local subjects like fishing grounds, canals, and rivers. He used a tonal color palette of neutral shades.

This painting The Square Watch-Tower features a tonal atmospheric landscape with subtle colors of blue and pink with the white sky coming in contrast to the brown land. This painting is an example of Van Goyen’s later style. We can see here how his style changed to incorporate more luminosity, brightness, and color. The low horizon, which is common for the artist’s work gives the painting a sense of expansiveness and depth.

Johannes Vermeer was one of the great Dutch painters, known for his extraordinary ability to use light and color in his paintings. He was born in 1632 in the city of Delft, where he stayed most of his life. In fact, he never traveled away from Delft after his marriage at the age of 20. Along with Rembrandt, he is considered the most important representative of the Dutch Golden Age.

Vermeer’s works were mainly female portraits, except for two urban landscapes, as well as two allegories. He drew inspiration from the daily life of Dutch society, especially the middle class of the 17th century. Vermeer’s View of Delft is probably the most memorable cityscape in 17th-century art. It is not a typical landscape with rural motifs, it rather shows an outdoor sight of the town.

When Vermeer painted this view of his hometown, he captured a feeling of serenity and silence. The perfect reflection of the buildings in the water, the deep shadow and bright clouds, and the bold silhouette of the city against the sky all underscore Vermeer’s intent on making images as realistic as possible. In his text In Search of Lost Time Marcel Proust described this painting as “the most special, more different than anything else he knew.” (Proust, 1913).

One of the most important landscape painters of the Dutch Golden Age, Cuyp was known for his depictions of the countryside bathed in golden light. Cuyp was interested in painting animals and birds but mostly preferred to depict peaceful atmospheric landscapes. He was deeply influenced by Jan van Goyen and Jan Both, incorporating many of their artistic elements into his paintings, like the color palette, the broken brush technique, and the Italianate landscapes.

Cuyp was particularly engaged in depicting the landscapes in the Italianate style, although he had never been to Italy. Clear, soft light illuminates a peaceful landscape with cows resting by the river, giving a sense of calmness in an idealized world of the 17th century. The cows were a symbol of Dutch prosperity that came after the independence from Spain.

8) Dutch painter Jan Both, Pioneer of the Italianate Landscape

Jan Both was one of the most influential Dutch painters and etchers of 17th-century art. He was the main exponent of the Italianate artistic style of Dutch landscape painting. Some of the Dutch Italianate painters stayed in Italy, while others came back to the Netherlands and kept painting Italian subjects. Jan Both was an artist who had visited Rome and spent his entire career back in the Netherlands recreating Italianate landscape paintings. Both had a great influence on many Dutch painters.

Both painted and etched landscapes of the Roman countryside with naturalistic lighting in a picturesque atmosphere. Mainly, he was inspired by the scenery of Roman ruins, peasants, forests, the golden light of the Mediterranean sun, and the Roman countryside. Italian Landscape with Draughtsman is a wonderful example of his work. In this setting of the Roman Campagna, he placed human figures surrounded by trees under the evening sky, highlighting a perfect balance between man and nature.