HomeArtistsGustav Klimt and His Muse: Who Was Emilie Flöge?

Gustav Klimt and His Muse: Who Was Emilie Flöge?

Like any artist, Gustav Klimt needed inspiration and found it in Emilie Flöge, a well-known fashion designer who became his muse, life companion, and lover. 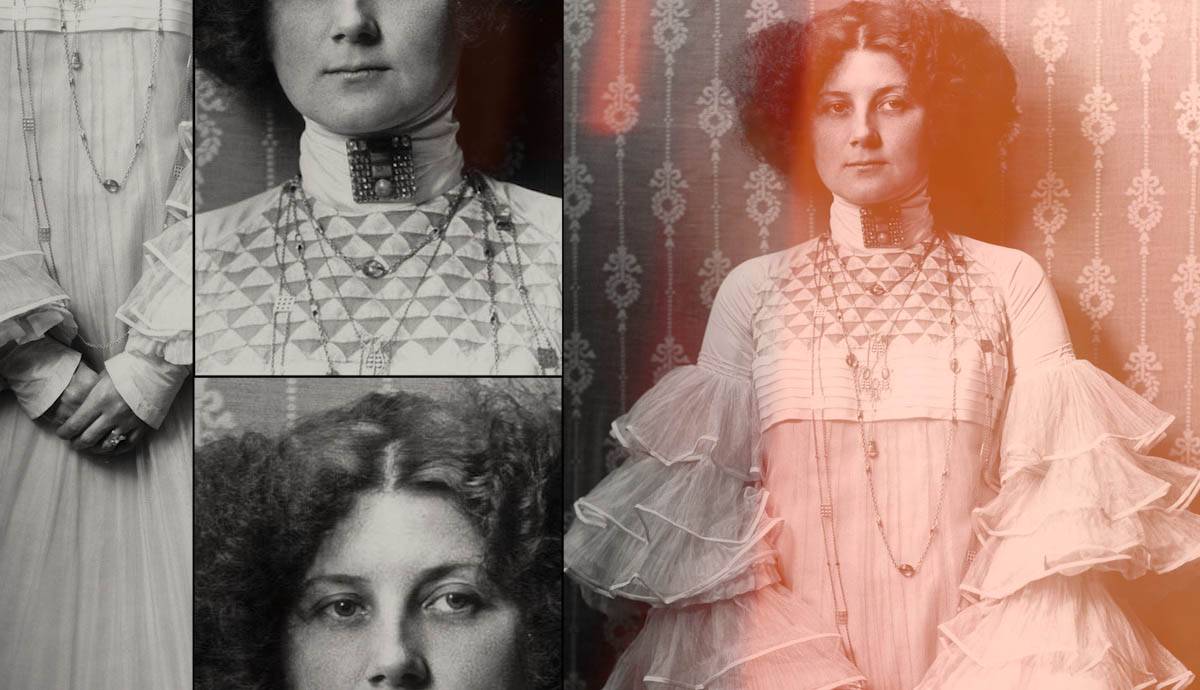 Although Gustav Klimt is considered one of the most famous painters in the world, little is known about his talented muse, Emilie Flöge. Klimt and Flöge had a very unconventional relationship and truly influenced each other’s works. Born in Vienna in 1874, Flöge emerged into the artistic world of Viennese society as a radical fashion designer and a businesswoman. Apart from being the painter’s life companion and business partner, she was an important figure of the fin de siècle and Viennese Bohemianism. Both Klimt and Floge shared the same clientele – the rich upper-class women of Viennese society. While Klimt painted their portraits, Flöge made dresses for them.

The story behind Klimt and Floge’s first meeting seems quite interesting. The two met around 1890 when Emilie was only 18 years old. One year later, Emilie’s older sister married Ernst Klimt, the brother of Gustav Klimt. Unfortunately, Ernst died a year after his wedding, leaving Gustav to support the family. From that time, Klimt began to spend each summer with the Flöge family at Lake Attersee, where he painted many of his landscapes, a lesser-known but an important aspect of his artistic practice. The painter and Emilie formed a strong bond that would never break. Although Klimt never married, his relationship with Emilie Flöge proved to be stronger than any marriage. The exact nature of their relationship is not clear. What’s certain is that it lasted for twenty-seven years.

In 1902, Gustav Klimt first painted Emilie when she was twenty-eight years old. In this portrait, Emilie was depicted as a mysterious woman, covered in a floor-length dress that she designed herself. This artwork marked the beginning of a new artistic vision by Gustav Klimt, characterized by detailed ornamental patterns and realistic rendered features. Emilie’s long outlined figure and highly decorative dress with ornamental spirals, gold squares, and dots are contrasted against a mystical blue-green background. Indeed, Klimt used to work in collaboration with Flöge, designing eccentric garments. Many women of the Viennese upper-class society who were enchanted by this portrait visited Klimt and Emilie’s studios to order similar designs and portraits.

After graduating from the School of Applied Arts, Emilie Flöge decided to make a name for herself in the fashion industry. In 1904, she and her sisters, Helene and Pauline, opened a fashion salon called the Schwestern Flöge in Vienna. Within a few years, this fashion house became a leading destination for the members of the Viennese society. Not only did it stand out because of the eccentric clothes but it also featured a fascinating interior design in the Art Nouveau style. The Flöge sisters introduced a new way of dressing for women, taking inspiration from the early feminist movement and Gustav Klimt’s bohemian lifestyle.

They specialized in wide-cut dresses with flounces and bold patterns, drawing inspiration from Austro-Hungarian and Slavic embroidery, oriental kaftans, and Japanese kimonos. Leaving out the tight corsets and heavy skirts, they moved towards loose, airy dresses with comfortable, wide sleeves. However, they soon appeared too revolutionary for conventional Viennese society.  Many of these textiles were designed by Gustav Klimt himself and created in the salon. Klimt was very inspired by Emilie’s designs, so he incorporated them into his paintings. In addition, the famous painter also introduced many of his elite clients of Viennese high-society to the fashion salon.

Emilie Flöge Could Be the Woman in the Kiss

Gustav Klimt was well-known for his notorious interest in the female form on and off the canvas. The Kiss is considered the most famous work of his, in which the Austrian painter depicted a woman enjoying herself in the embrace of her lover. The painting was created around 1907. This was the so-called Golden Age of Klimt’s professional career.

Some art historians believe that the female model pictured in this work was Emilie Flöge, although the hair color suggests it might be the red-haired Hilde Roth, one of Klimt’s lovers. It is possible that in this painting, Klimt depicted himself and Emilie as lovers full of passion and devotion. Throughout history, many people had different interpretations about the work and its symbolic meaning. For some, it isn’t exactly clear what the woman’s feelings in the painting are. Is it hesitation or desire for her lover? What’s certain is that this is one of the most important paintings of Art Nouveau.

The large-scale work features two figures, a man and a woman in a passionate embrace. Unlike his other paintings, where the woman has a dominant and dynamic character, in this painting, the female figure is left in the arms of her partner, almost kneeling. They are dressed in golden robes and the man leans down to kiss the woman on the cheek. The fitted dress of the woman, decorated with small geometric patterns, is reminiscent of Emilie’s designs. The couple is seen standing in a field of flowers on a two-dimensional plane. The most remarkable thing about this work is how Klimt drew inspiration from many different artistic styles to create a masterpiece.

One of the most obvious influences is that of medieval art. It is known that Klimt visited Ravenna and was inspired by the Byzantine mosaics he saw there. The contrasting colors also bring to mind illuminated manuscripts of the Middle Ages. Furthermore, several spiral designs are reminiscent of pre-classical art. The figures are flat and two-dimensional, which is similar to Japanese prints that had become popular in Europe about twenty years before this painting was created.

Emilie Flöge Reformed the Fashion Industry of the 1900s

Although Coco Chanel is often heralded as the only designer to revolutionize womenswear, Emilie Flöge had already started before her. By the time Chanel had opened her salon in 1910, Flöge had already been producing cutting-edge designs in Vienna for several years. Flöge was really fascinated by first-wave feminism, aiming for women’s liberation from the shackles of the corset and modesty. As a member of the Viennese Secession, Flöge tried to revolutionize the fashion industry through her Reform Dresses.

Klimt was not only a representative of the Vienna Secession movement and father of Art Nouveau but also one of the most important supporters of clothing reformation. Both supported the movement of the Rational Dress Society, which was against the constraining bodices and corsets of the time. Flöge’s creations brought a spirit of freedom. Flowy, A-line dresses decorated with circles, triangles, ovals, and other geometric ornaments that hung loosely like the more modern caftans. Flöge highlighted femininity through loose fits and relaxed cuts, praising physical freedom and introducing revolutionary modern values. The inspiration behind her Reform Dress came from the French couturier Paul Poiret, who liberated women from the corset in 1906.

The Legacy of Gustav Klimt and Emilie Flöge

Gustav Klimt died of a stroke on January 11, 1918. His last words were said to be “Bring Emilie.” After his death, Emilie Flöge inherited half of Klimt’s estate, while the other half went to the painter’s family. Although she had lost her life partner and her dear friend, she continued to commemorate him through her work. With the annexation of Austria to Germany in 1938, the Schwestern Flöge tailoring salon had to close, as plenty of their Jewish clients fled from Vienna. During World War II, Floge’s apartment in Vienna caught fire, destroying not only her clothing collection but also many valuable items made by Gustav Klimt.

Despite being known as Klimt’s muse, Flöge was much more than that. She is considered one of the most influential European designers of the early 1900s. Not only did she challenge the mainstream silhouette, but she also combined fashion and art in a very unique way. Her reform fashion was absolutely avant-garde, extraordinary, and ahead of her time. For many years, Flöge was considered a hidden gem. She was largely unknown in the fashion industry until she started showing her clothing designs. Even today, many contemporary fashion designers take inspiration from Flöge’s designs for their collections. Flöge eventually died in Vienna on May 26, 1952, leaving behind a great legacy in the history of fashion design.