HomeArtistsEgon Schiele: 7 Outstanding Portraits and the Stories Behind Them

Egon Schiele: 7 Outstanding Portraits and the Stories Behind Them

Egon Schiele was a prolific painter. During his short lifetime, he helped redefine portraiture in Vienna at the beginning of the 20th century. 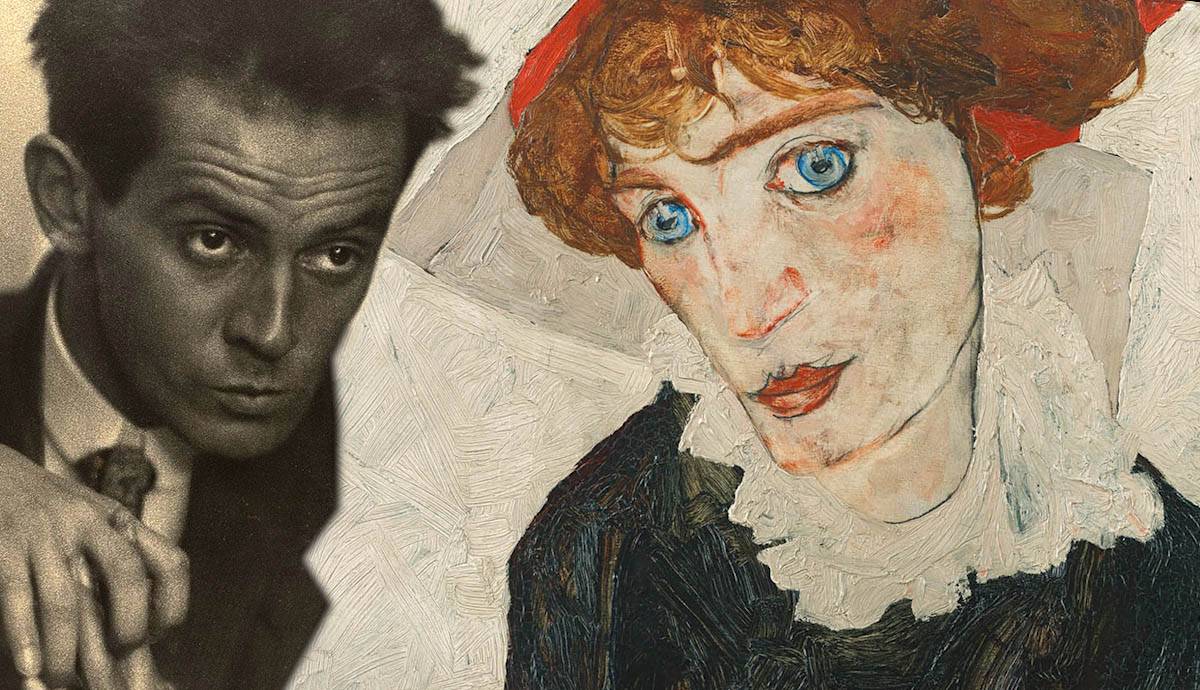 The Austrian painter Egon Schiele was born in 1890 in the scenic town of Tulln. Along with Max Oppenheimer and Oskar Kokoschka, he co-founded the Neukunstgruppe (New Art Group) in Vienna. But soon, Schiele moved away from this group and started experimenting on his own. Schiele’s paintings and drawings serve as examples of early Expressionism. His main subjects were female nudes, self-portraits, and paintings of children. Rejecting conventional ideas of beauty, he embraced what would typically be considered ugly. Schiele explored concepts ranging from the fear of death to depression and isolation.

In 1910, at the age of 20, Egon Schiele painted three large full-figure self-portraits, including the Seated Male Nude.  In these paintings found ways to express many aspects of himself visually, from his internal anxieties to his sexuality and the fear of death. As we can see in Seated Male Nude, the figure floats in a void, drawing all the attention to the pose of the body itself. This work expresses Schiele’s deep anxieties in a very candid way. Despite its somewhat monstrous demeanor, the contorted figure’s pose, with its exposed belly and genitals, signifies a kind of vulnerability and even openness, while the conspicuously amputated hands and feet contrast that vulnerability with ideas of punishment. Schiele uses lines masterfully, quickly, and fluidly in order to capture the nuances of the human form. He chooses colors like dirty umbers, siennas, and ochres to evoke discoloration, disease, and even death, while brown, green, and yellow shades are reminiscent of rot. These colors are contrasted with the vivid red that signifies lust and sexuality, which Schiele also explored through his art.

2.  The Austrian Painter’s Most Peculiar Self-portrait

Egon Schiele’s Self-portrait with Peacock Waistcoat Standing is one of his most unusual self-portraits. In contrast with his previous work, the figure is not standing in a blank space; instead, the paper is filled out entirely. Also, he is not naked and in a state of misery, despair, and grief, but his gaze is smug, arrogant, and proud. Surrounded by a sort of aureole, it is as if he is bringing salvation, like Christ or God.

For the first time in his work, Schiele’s legendary gesture with the V shape is visible. This gesture was pretty common in the times when Schiele painted this portrait. It is reminiscent of Christ Pantocrator’s gesture that appears in the Byzantine frescoes. Schiele mimics the gesture of the universal ruler who brings salvation to the world, suggesting that art can do the same. What makes a difference is that in this portrait Schiele is dressed very elegantly, during a time when he was extremely poor. This portrait doesn’t depict reality but rather it shows Schiele’s fantasy. He slips into the role of a nobleman, dressed in a waistcoat and a shirt collar, willing to bring salvation through his art.

3. The Relationship between Gustav Klimt and Egon Schiele

In his early years, Egon Schiele was strongly influenced by Gustav Klimt, who became a mentor to him. However, Klimt was older, meaning these two artists came from two different generations. Klimt represents the aesthetic movement of the Vienna Secession while Schiele, was associated with ‘the crisis of mankind’ and ‘the collapse of the world.’ At the age of 16, Schiele was the youngest student at the Academy of Fine Arts in Vienna. He met Gustav Klimt here and was inspired by his figurative style.

Klimt rendered his figures with a distinctive style and grace, and Egon Schiele soon found this was not for him; it wouldn’t be long before the two painters’ styles began to diverge. Schiele soon began experimenting with a more expressive style, one that was less decorative, and one that finally evolved into his own aesthetic. In 1913, as an homage to his master, Schiele depicted Klimt in his famous loose-fitting blue smock that he used to wear.

In 1911, Egon Schiele started having an affair with 17-year old Wally Neuzil, who became his muse, model, and lover. She was a former model and possible mistress of Gustav Klimt. During some of the darkest times of Schiele’s life, Wally was proven to be an invaluable companion, especially when they moved to Krumau, the birthplace of Schiele’s mother, as they perceived life in Vienna as claustrophobic. Schiele’s famous portrait of Wally from 1912 has an interesting history behind it. After Schiele died in 1918, many of his artworks had been collected by Jewish art collectors. In fact, Lea Bondi, who was a Jewish art dealer in Vienna and was fleeing the German annexation, owned this Portrait of Wally in 1938.

After World War II, this portrait was confiscated by the Nazis, who wanted to control the culture of the entire world. In this painting, Schiele demonstrates his passion for Wally, capturing her huge eyes in an interesting way. The restrained color palette that he so often used is now punctuated by her blue eyes, orange locks, and traces of vibrant red.

5. Schiele Depicted His Wife Edith in a New Way

Upon the return of Schiele and Wally to Vienna, Schiele found his attention drawn to a pair of sisters who lived across the street from his studio, Edith and Adelaide Harms. After a brief courtship that involved him hanging his self-portraits out the window to catch their attention, Schiele persuaded Edith to marry him. Part of Schiele’s decision to reject Wally for Edith was because Edith’s social standing offered more benefits to Schiele’s chosen career. With his new wife, Schiele’s work entered a new phase. Unlike Wally, Edith was pretty uncomfortable posing nude. She forced Schiele to paint her in the most radical way he had approached any figure thus far. For this portrait of Edith, the Austrian painter adopted a different approach. The fact that he depicted her standing with her clothes on, and highlighted the vibrant colors of her striped dress, shows that he was clearly making a painting in a way that would please his new wife.

6. His Favorite Themes Were Sex and Death

Egon Schiele held a deep fascination with the human body, one that was fueled by his personal anxieties regarding two of the renowned psychoanalyst Sigmund Freud’s favorite subjects: sex and death. This dicey subject matter coupled with his own occasional oddball behaviors would make Schiele no stranger to controversy during his short career. His middle-class childhood, while not uncomfortable, became shaped by two incidents that would foreshadow his later interest in that Freudian double act of sex and death.

It is said that Schiele had shared an intense, even borderline incestuous relationship with his younger sister Gertrude. The other formative event concerns his father, Adolf Schiele who died from syphilis when Schiele was 14 years old; the experience of watching his father waste away from this sexual disease had an immense impact on Schiele. The notion that his father’s demise had come from his habitual visits to brothels was linked to concepts of sex and death in the young man’s mind.

Schiele’s painting above, Death and the Maiden, contains an unusual autobiographical story. It was painted in Vienna, the capital of the Austro-Hungarian Empire, where a decaying power gave birth to a culture of innovation and anxiety. Out of this came Death and the Maiden in 1915. A painting of two lovers clinging to each other, seemingly on the edge of an abyss, resembles the design of Gustav Klimt’s Kiss. But what it conveys more overtly is the universal human theme of sex and death. Schiele painted this work at a turning point in his life. He was abandoning his first great love, Wally Neuzil, and he was on the verge of conscription for the First World War. Schiele therefore cast himself in the role of death, and Wally in the role of the maiden.

The two figures cling to each other in despair while there is a war scene happening in the background. The painting is a look back to old ideas of allegory and the common theme featuring a beautiful girl and a skeletal figure. Schiele succeeded in reinventing the idea of allegory in a contemporary way. Apart from depicting the death of true love, this image is filled with a sense of the death of old Europe too.

While sick with the Spanish Flu, Egon Schiele started painting a family portrait. It was originally titled Squatting Couple, but it later became known as The Family. Schiele himself is staring at the viewer, overlooking the composition in front of a dark, messy background. Between his legs sits Edith Harms, his wife. Unlike Schiele, she’s looking away and, though her legs are also spread apart, she’s taking up a lot less space than her husband. She is the central figure of the composition and, perhaps to Schiele, the central figure of his family. Between her legs sits their child. His wife died on October 28th, 1918 from pneumonia while being six months pregnant. Only 3 days later, the Austrian painter also died from the Spanish Flu.  It’s a painting of a father projecting himself into a future he will never get to live with a wife and a kid who, tragically, will also not make it out alive.

The Legacy of Egon Schiele

Egon Schiele’s art has had a long-lasting impact on the course of modern art. The Austrian painter influenced not only the expressionist movement of his day but also the nature of modern and contemporary portraiture. The distorted and linear qualities of his style are now common in figurative drawing, from fine art to illustration. His focus on the human body also paved the way for contemporary artists to analyze the body as an instrument of expression in its own right.