HomeArtEdgar Degas’ Most Graceful Depictions of the Paris Opera Ballet

Over half of Edgar Degas’ published works are of Paris Opera ballet dancers. Through these paintings, we can survey the otherworldly elegance of the Paris Opera Ballet. 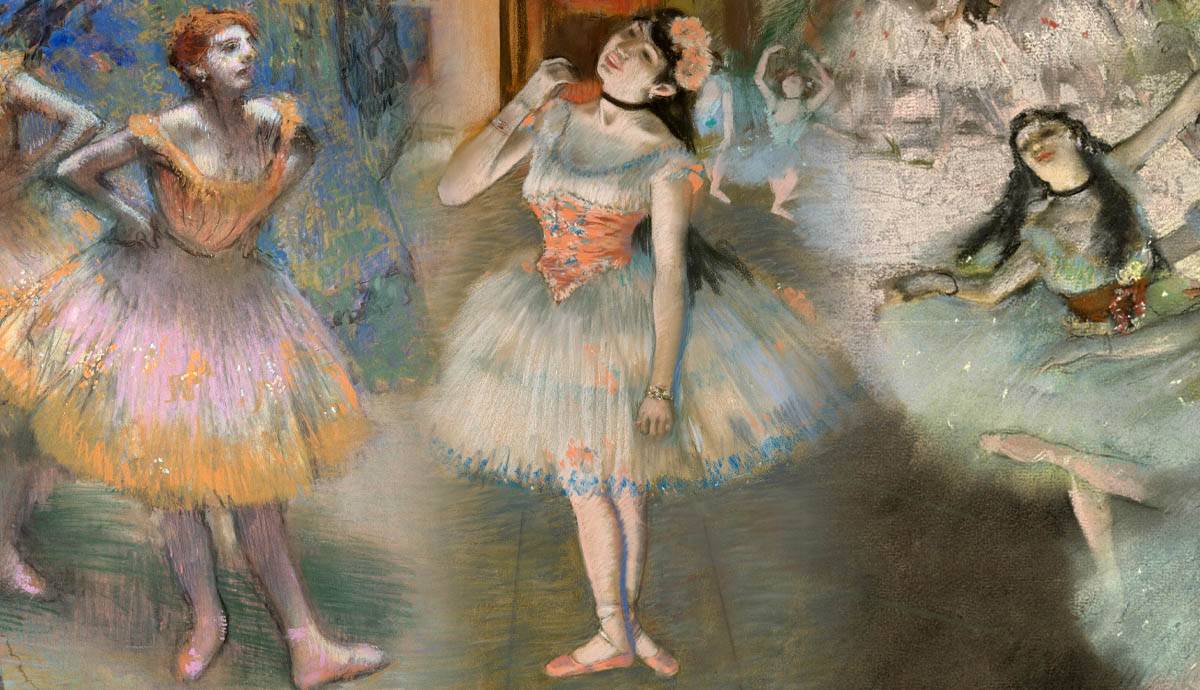 In Paris, especially from 1860 through 1870, women were everything. With the scandalous exposition of Manet’s Luncheon on the Grass at the Salon des Refusés, French art officially began to move away from neoclassical, mythological goddesses. Instead, artists became fascinated with the modern Parisian woman in local settings. Aside from the courtesans of the time, no Parisian woman was more documented in French art, literature, and music than the Paris Opera ballerina. The ballerinas even became the primary focus of a prolific painter: Edgar Degas.

Edgar Degas did not consider himself an Impressionist painter, preferring to call himself a “realist.” However, the graceful lines and soft colors of the ballet dancers were the perfect subjects for Impressionism. Over time, Degas and his dancers at the Paris Opera Ballet would generate some of the most elegant and famous artworks in history.

Ballet at the Paris Opera is a stage scene focused on several ballet dancers on the stage with the orchestra below. Because of the dancers’ informal hair and positioning, many believe that Degas depicted a dance rehearsal instead of a performance. Yet, although it is a rehearsal, there is still something otherworldly about the painting.

Compared to the darker orchestra, the ballet dancers are light pink, powdery, and merge with their ethereal background. Like many of Degas’ other paintings, the isolation of the ballet dancers from the orchestra indicates their transcendental quality.

The pastel technique used to paint the dancers was described as the “powder of a butterfly’s wings,” reflecting the short life of the dancer’s beauty. Though these dancers were beautiful and graceful, their careers were often unfortunately unstable. In this painting, the grace depicted is fleeting, making it all the more bewitching. For this reason, the painting is on several must-see lists.

Merging subjects with their backgrounds is typical of both Degas and the Impressionist movement. This specific instance reflects how the dancers were part of another realm of being, just visible from the stage.

The Ballet from “Robert le Diable” depicts the legendary “Ballet of the Nuns” scene from the French Opera, Robert Le Diable. In this moonlit scene, the nuns, or ballet dancers, would come back to life and dance away from their tombs in the moonlight. The setting was usually very ornate and modeled after a cloister in a cathedral.

At the time Edgar Degas painted this, the popularity of this opera had started to decline; maybe for this very reason, the man in the center is looking around through his opera glasses, distracted. Though Degas makes sure to capture the distraction of the man, he also chooses to highlight the spectacle of the dancers on stage in bright white flowing blurs, creating a distinct contrast.

The Rehearsal of the Ballet Onstage by Edgar Degas portrays a dress rehearsal at the Paris Opera Ballet. In center stage, the lightly colored, powdery dancers rehearse their performance, while the dark figures in black watch and control the performance. Many believe that Degas depicted the power dynamics between powerful men and working-class women, a theme common in many of his other works.

The soft, pastel world of the ballerinas and their mystical stage set is juxtaposed by two male abonnés positioned in the dark, plain corner of the painting. During this time at the Paris Opera Ballet, abonnés, or male patrons, could pay to socialize backstage with the ballerinas, sometimes in search of sexual favors.

While the portrayal of femininity is aesthetically soft and pleasing, it is equally important to recognize the context surrounding the ballet dancers. The Rehearsal of the Ballet Onstage depicts unearthly femininity but also shows what interrupts it.

4. The Dance Class, 1874: Everyday Life at the Paris Opera Ballet

In this artwork, ballet dancers move around the classroom or run through the halls while their mothers watch. In the picture, the class is conducted by Jules Perrot, an infamous ballet master of this time. A picturesque dancer stands center stage performing an arabesque, grounding the commotion of the painting. Such was everyday life for the ballet dancers of the Paris Opera Ballet.

In this painting, there are many references to Degas’ contemporaries. According to the Metropolitan Museum of Art, there is a reference to a French singer: “On the wall beside the mirror, a poster for Rossini’s Guillaume Tell pays tribute to the singer Jean-Baptiste Faure, who commissioned the picture and lent it to the 1876 Impressionist exhibition.”

The references to French celebrities like Jules Perrot and Jean-Baptiste Faure demonstrate how prominent Paris Opera ballerinas were within Parisian culture. The ballerina was an icon so central to Parisian society that ordinary classes held connections to Parisian celebrities.

Many of Degas’ paintings represent the corps de ballet, or petit rats, of the Paris Opera Ballet, but in this case, The Star documents stardom and Mauri’s autonomy over her own career. Like many other primas at the Paris Opera Ballet, Rosita Mauri was a prominent figure in French society. She was notoriously quick-tempered and had quite a lot of agency for her time period and circumstances.

In fact, Mauri was so central to French society that the press became obsessed with her. At one point, she was rumored to cause Antonin Proust, a notable French politician, to take his own life. According to the French press at the time, Antonin Proust took his own life shortly after dining with her, which they (unfairly) found suspicious.

Although the press scrutinized her, Mauri still enjoyed fame. In the painting, Mauri stands solo in front of the corps de ballet, who are one unit indiscriminately blended together. Unlike many of Degas’ other paintings, no dark-suited figures are looming around Mauri; she has full control. There is only one moment of Mauri’s performance, forever gracefully frozen in time.

Unlike The Star, Two Dancers by Edgar Degas takes place in the wings of The Paris Opera Ballet. In this painting, the ballet dancers are posed in natural positions, waiting to take their place on stage. Instead of capturing the perfect positions that the dancers would perform on stage, Degas looked to the wings of the theater to catch the dancers in a moment of anticipation.

Although the ballet dancers are not on stage yet, they are rather still merged with the background of the wings; even though they wait in contorted positions, they are still a part of the performance world. Two Dancers very simply highlights the zone between performance and reality as well as the work that goes into creating the grace of the ballet.

On the Stage is one of Edgar Degas’ most well-known paintings. The dancers move in flowing lines, united with their stage set and with each other. In the back, the dancers are enveloped by soft pastels. On the Stage, moreover, is a strict depiction of movement for movement’s sake.

As a painter, Degas was most interested in capturing the moving human body, and ballerinas were the perfect subject to capture such motion. After defending France in the Franco-Prussian War in 1871, Degas steadily began to lose his eyesight. Thus, the swirling depictions of the dancers might be relatively close to his visual perspective.

Degas’ method of using multi-layered pastels helped him capture the atmosphere of the Paris Opera Ballet. More so than Degas’ many other paintings, On the Stage captures the graceful spectacle of the Paris Opera ballerinas. The abstract nature of ballet and the airy motion of the ballerinas were in unique harmony with Degas’ own style and perspective.

Thanks to Edgar Degas and his dancers, we have several timeless portrayals of poise and grace like On the Stage. They serve as snapshots of French history, where femininity and grace were hallmarks of the overarching society, and ballet dancers were ambassadors of culture.