After a devastating defeat against Prussia in 1870, France faced one of its biggest uprisings in modern history: a popular socialist revolt, establishing the Paris Commune. 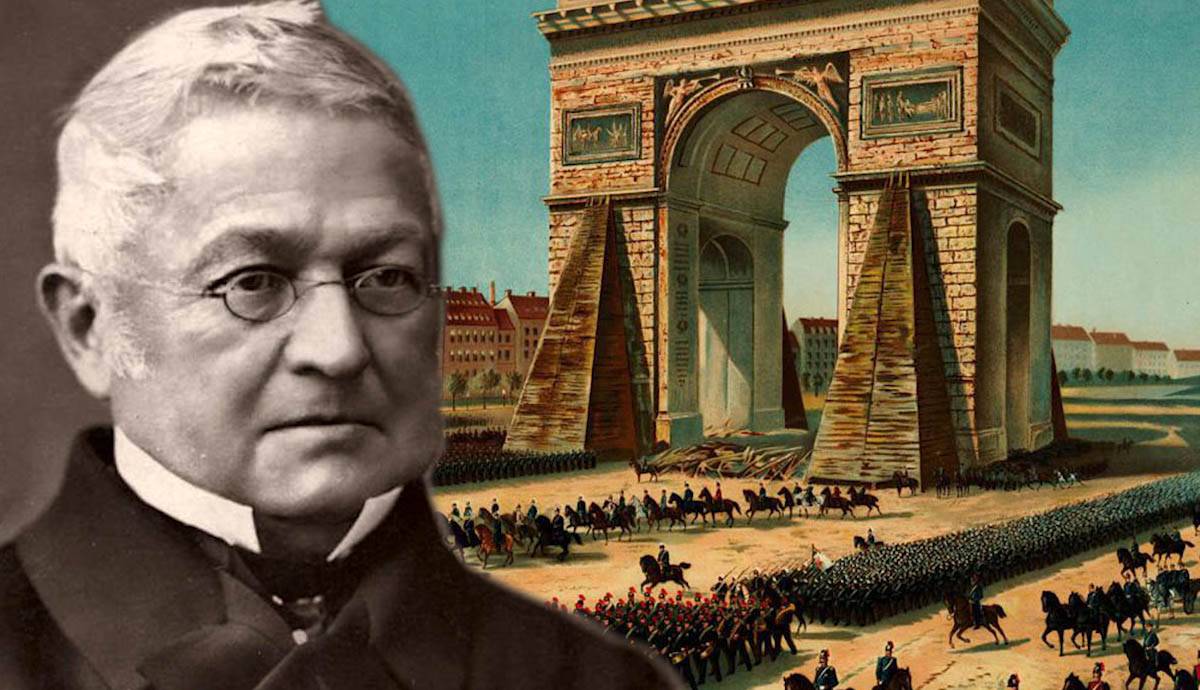 The year is 1871. France has been severely defeated in the 1870-1871 Franco-Prussian war. Paris is in turmoil. The freshly established Third Republic struggles to form a working government, and the French capital’s population despises the elected officials.

In this context, a major popular uprising shakes France and all of Europe to its core. Pushing government officials out of the city, the protestors set up their own form of government through a popular assembly, where all the people of Paris had a say in matters of governance. The Paris Commune (La Commune de Paris) is born. Its supporters, the communards, would hold the city for two months, struggling to establish themselves as a working assembly and facing constant pressure from the French regular army. In May 1871, the communards were crushed in what is remembered today as la semaine sanglante, or the bloody week. According to official sources, 20,000 insurrectionists were killed by French regular troops.

Origins of the Paris Commune

Understanding the Paris Commune requires going back to 1870, on the eve of the Franco-Prussian War, which had disastrous effects on France’s economy, and caused a decisive change of regimes. At the beginning of this conflict, France was an imperial monarchy led by Napoleon III, nephew of the infamous Napoleon Bonaparte. Despite relative stability, the authoritarian rule of the emperor earned him the animosity of the republican factions. Additionally, the failure of the imperial government to resolve issues of poverty and the nepotism of the rich classes of society allowed for an easy spread of early socialist ideologies such as Proudhonism and Blanquism, which will play a major role during the Paris Commune.

The relations between France and Prussia started deteriorating in the 1860s. By 1870, France successfully opposed the rise of a German prince to the throne of Spain, which was used as a pretext by the Prussian chancellor Otto von Bismarck to declare war on July 19th. Facing defeat after defeat, a French army led by the Emperor himself surrendered in Sedan, with Napoleon taken hostage. Following this, a provisional government of national defense was established in Paris, proclaiming the emergence of a new republic and deciding to pursue the war against Prussia.

After a swift siege, French authorities surrendered in late January 1871, signing an armistice and accepting humiliating peace conditions. Prussian troops entered the capital and held a symbolic military parade before leaving the city and occupying 43 departments in the east of France. The French soldiers present in the city saw in the Prussian parade a humiliation.

During the brief occupation, tension in Paris was already at its peak. Prussian soldiers wisely avoided parts of the city where opposition to peace was high and left after only two days. In such conditions, the first legislative elections of the Third Republic were organized on February 8th, 1871.

Adolphe Thiers & the Rise of the Third Republic

Due to the German occupation of Eastern France, only non-occupied departments voted in the elections. In order for the elected assembly to have legitimacy in all of France, candidates were allowed to run in more than one constituency. Nevertheless, for many socialists, peace opposers, and republicans, this election represented a hope to see their ideas implemented as policies.

Despite the growing industrialization and urbanization, France was still a rural country. While cities were mostly dominated by republicans, villages and small agglomerations were fiercely religious and conservative, hoping for a return of the old Bourbon monarchy. Thus, the first elected assembly of the Third Republic was dominated by monarchist factions. Trying to ease the tension with the republicans, the elected assembly chose Adolphe Thiers, a moderate republican, as president. However, it was not enough to mend the bridge between the two main political groups of the country. Monarchists hoped to re-establish the Bourbon dynasty coupled with parliamentarism, similar to the British Westminster system. Republicans, on the other hand, wished for the complete abolition of all forms of hereditary rule, with an immediate separation between church and state.

The first matter of business for the president was to finalize the peace treaty with Germany. From the Assembly’s quarters in Bordeaux in Southern France, he agreed to the German conditions and ordered full disarmament of Paris right after the departure of foreign soldiers. Arriving at the capitol on March 15th, Thiers ordered that all canons positioned inside the city be moved back to military barracks.

While the order was executed without major opposition in most parts of Paris, the situation was quite different on the high grounds of Montmartre. The National Guards stationed there refused to execute the order, opening fire on the approaching loyal factions of the French army. Major fighting broke out across the city, with the working-class joining arms with the National Guards. Opposers to peace with Germany, radical republicans, socialists, and other anti-monarchist groups all joined the general popular uprising, seizing important government buildings. Adolphe Thiers, alongside all of the other government officials, managed to flee the city. Thiers established himself in Versailles, gathering a strong force of loyalist soldiers.

The Beginning of the Paris Commune

On March 26th, the rebels announced the establishment of the Paris Commune, declaring secession from the French Republic. The freshly reformed French army quickly suppressed similar uprisings in Lyon, Marseille, and other major French cities. On March 27th, Adolphe Thiers declared the communards to be enemies of France and democracy. In the meantime, the leaders of the Paris Commune were struggling to form a working government.

Seeing itself as a political body governed directly by the people, the Paris Commune was formed by municipal councilors, elected by universal suffrage from the various arrondissements of the city. They were originally normal citizens, mostly from the working class, with no prior experience in governments or politics. Arthur Arnould, Gustave Flourens, and Emile Victor Duval were among the most famous communards. The different branches of the administration were organized in a way that would allow direct control from the people.

The Paris Commune also imposed strict secularism: religious buildings were demoted to private properties, effectively separating the state from the church. In 1905, the by-then restored republican government reenacted this separation, issuing the famous law on laicity still going strong in France today. The communards established a free-of-charge education system, thus allowing children from all social classes to benefit from schools.

Ideally, the Paris Commune was not against a French nation, but they wanted it to be decentralized to the point where each department had a lot of autonomy, with full control of its own public services and militias (set to replace the army). Thus, theoretically, each Parisian district ruled itself. This form of government did not get the time needed to prove its efficacy. Immediately after the expulsion of the elected republican government, Adolphe Thiers was already preparing his counter-offensive.

Despite signing the armistice, the German Empire still held more than 720,000 French troops as prisoners. After returning to their homeland, those soldiers were sent to crush the uprisings in other self-declared communes (Lyon, Marseille, Saint Etienne) before being gathered in Versailles.

Having 120,000 soldiers at his disposal, Adolphe Thiers went on the offensive on March 21st. The operations were led by Marshal Patrice de Mac Mahon, a monarchist French nobleman and skilled military tactician. The Paris Commune’s armed force was composed mainly of volunteers with no military training or experience and the National Guard, which had limited manpower.

The communards failed to take control of some strategic positions at the outskirts of the capital. Despite managing to gather a force that, according to some sources, reached 170,000 armed men and women, the communards poorly managed the campaign, severely mishandling their only offensive action, the march on Versailles, that targeted to push governmental forces out of the prestigious monarchic palace.

The Battle For Paris

By April 11th, Adolphe Thiers’ army started its attack on Paris. On May 13th, all defensive forts had been occupied, and on May 21st, the regular forces launched a full attack on the streets of the capital. For seven days, Communard’s resistance was crushed in what is remembered today as “the bloody week” (la semaine sanglante). It is said that the regular army’s attack was so harsh and effective that the city’s drains were filled with blood.

The French army adopted a ruthless strategy. Only a few prisoners were taken while most communards were shot on sight. The leaders of the Paris Commune adopted a similar strategy, passing a “Decree on Hostages,” which mandated the arrest of many supposed opponents to the revolutionary regime, including religious dignitaries. The prisoners gathered by the Commune were subjected to quick judgments by popular tribunals and swift executions.

The Aftermath of the Paris Commune

For seven days, the French army carved a bloody path for itself in the city. Countless combatants fell on both sides, but it was the communards who paid the biggest toll. More than 20,000 casualties were recorded in the revolutionaries’ ranks. Additionally, countless monuments were damaged: on May 23rd, the Tuileries Palace, the last residence of Louis XVI, burned in a horrific fire. The next day, the Hotel de Ville, another famous monument of the French capital, also went up in flames.

In the aftermath, more than 45,000 communards were held as prisoners. The French authorities dealt with them in different ways; some were executed, some deported or imprisoned. However, more than 22,000 were spared. Around 7,500 communards managed to flee Paris on the last day of battle, taking residence in England, Belgium, and Switzerland.

On March 3rd, 1879, a partial amnesty allowed the return of 400 deportees in Caledonia and 2,000 exiles. On July 11th, 1880, a general amnesty was issued, allowing for the return of most communards to France. Adolphe Thiers ruled France until 1873. In that year, the monarchist Marshall Patrice de MacMahon was elected president. During his administration, which lasted until 1879, France was close to becoming a monarchy again under the pretender king Henry the 5th de Bourbon.

The Paris Commune is one of the bloodiest events in European history. It was also a major event in the history of socialism. In the aftermath of the battle of Paris, Karl Marx would claim that the Commune was the first experience of a socialist society. The events of March to May 1871 would pave the way for the emergence of major socialist, communist, and anarchist movements across Europe. Groups claiming allegiance to those ideologies would take up arms against governments and kings, killing the Russian Tsar Alexander II in 1881 and the French President Sadi Carnot in 1894. Socialism would also continuously gain support and sympathy from various worker movements, culminating in 1917 with the famous October Revolution, which would lead to the creation of the USSR.