8 Facts on The Three Unifiers of Japan: Nobunaga, Hideyoshi, & Ieyasu 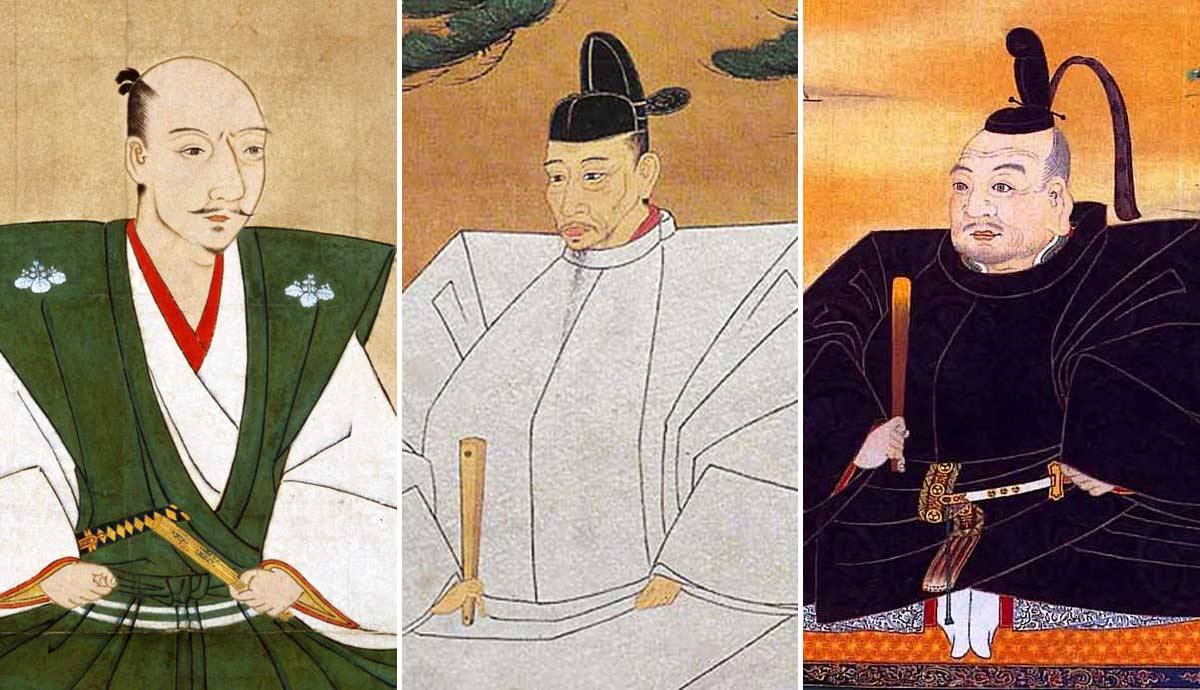 Since 1464, Japan had been going through an era of major upheaval remembered today as the Sengoku Jidai: the Warring States Period, a tumultuous age of constant warfare. For more than a century, various local lords, known as daimyos, fought against each other for dominance and conquest with the aid of samurai warriors, while the Imperial Court in Kyoto was in constant turmoil. But this situation was about to shift drastically as a group of remarkable individuals, brilliant young lords, and outstanding generals was about to shake the status quo and play a unique role in the late sixteenth century of Japan. This was the time of Oda Nobunaga, his loyal retainer Toyotomi Hideyoshi, and their powerful ally, Tokugawa Ieyasu. It was the time of the Three Great Unifiers of Japan.

1. The Three Great Unifiers of Japan Lived During the Sengoku Period

All three great unifiers of Japan were born in the midst of the Sengoku Jidai. This chaotic epoch was a time of continuous conflict during which the ruling Ashikaga Shogunate was left with a marginal role and the Japanese feudal lords–the Daimyos–attempted to increase their territories and influence. It was a time of crisis illustrated in a series of multiple conflicts that devastated Japan. The Sengoku period was also a time of feats of great samurai heroism, epic battles, and remarkable generalship.

The three great unifiers all suffered the effects of this era and strongly contributed to bringing it to an end. Oda Nobunaga, the first of the three great unifiers, overthrew the weakened Ashikaga Shogunate in 1573 and unified all of central Japan under his thumb. His successor, Toyotomi Hideyoshi, completed his work and subjugated all of the Autonomous Daimyos. However, it was Tokugawa Ieyasu who put an end to the Sengoku Period in 1615, established the Tokugawa Shogunate, and ushered in the peaceful Edo Period.

The Tokugawa Period was characterized by the country’s isolation from western foreigners and a social caste system that made it difficult to rebel. Japan remained under a strict cast regime and isolated from the world until the Meiji Restoration in the 19th century.

2. The Three Great Unifiers of Japan All Had Difficult Beginnings

The three great unifiers started from the ground up. When Oda Nobunaga became Daimyo of Owari Province in 1551, Tokugawa Ieyasu, who was going by the name Matsudaira Takechiyo, was a hostage of the Oda Clan, while Toyotomi Hideyoshi was a peasant of the Oda lands, occasionally serving as ashigaru: foot soldier of the low-born rural military class.

Oda Nobunaga inherited a fragmented province and spent the first years of his rule fighting his family as well as his more powerful neighbors, such as the Imagawa Clan. Due to his reputation for being a “fool” and his boisterous attitude as a teenager, Nobunaga’s retainers mistrusted him and were prone to betrayal. Early in his rule, he had to send Ieyasu as a hostage to Imagawa Yoshimoto in order to avoid a total invasion.

As Nobunaga managed to reunify his lands in 1559, Tokugawa Ieyasu followed Yoshimoto in the conquest of Owari. But when the latter died at the pivotal Battle of Okehazama, Ieyasu switched sides and joined the Oda. Okehazama was also the confrontation where Toyotomi Hideyoshi made such a strong impression on his social superiors that the Oda Daimyo made him samurai.

In opposition to Toyotomi Hideyoshi, Oda Nobunaga and Tokugawa Ieyasu were the Daimyos of their respective provinces. While it was clear that Nobunaga was the senior partner of this alliance, it did not stop Ieyasu from having major disagreements and disputes with him.

The first major dispute between the two happened in the 1560s about the Ikko-Ikki threat, the Buddhist warrior monks. Tokugawa’s province, Mikawa, had many Ikki strongholds that directly challenged Ieyasu’s rule. The Daimyo spent most of his early years as ruler combating the sect while his ally was busy pursuing his ambitions of conquering Japan. This angered some of the Tokugawa retainers, but they managed to suppress the Ikki nonetheless, although not without almost losing their lord at the Battle of Azukizaka.

But the most dangerous quarrel between Nobunaga and Ieyasu happened when facing the powerful Daimyo Takeda Shingen of Kai Province. The latter joined an anti-Oda coalition and invaded Tokugawa territory in 1572. He even defeated Ieyasu at the Battle of Mikatagahara in 1573. Despite his call for aid, the Lord of Mikawa barely received any support from his ally, which pushed him to send a fiery letter to Oda that almost broke the alliance between the three great unifiers.

Oda Nobunaga, understanding the direness of the situation, came personally to aid Ieyasu. Together, they managed to inflict a severe defeat on the Takeda Clan at the Battle of Nagashino in 1575 and, seven years later, conquer Kai Province.

Oda Nobunaga was betrayed in June 1582 by Akechi Mitsuhide, one of his retainers. The latter attacked his lord while partaking in a tea ceremony at the Honno-Ji temple in Kyoto. Nobunaga’s son, Nobutada, was also targeted by Mitsuhide’s men. Having no way out, the Oda leaders committed seppuku.

At that time, Toyotomi Hideyoshi was besieging the Mori Clan in Takamatsu. Receiving the news of Nobunaga’s death, Toyotomi quickly concluded a favorable peace and marched on to Kyoto to avenge his master. He was joined by Oda Nobutaka, the third son of Nobunaga, and Niwa Nagahide, a fellow general who served under the Oda Clan.

Toyotomi and Akechi forces met in early July at the Battle of Yamazaki. This epic clash of swords saw Mitsuhide’s army completely overrun and it’s general attempting to escape. Eventually, he was cut down by Hideyoshi’s men. This show of loyalty was one of the key characteristics of the relationship between the three great unifiers.

In the aftermath of the battle, Toyotomi Hideyoshi entered Kyoto and became the country’s de-facto ruler.

Toyotomi Hideyoshi is considered to be the second unifier of Japan because he completed his predecessor’s work. In the first years of his reign, the new ruler of Japan had to face dissidents among the ranks of the previous generals of Oda Nobunaga, such as Shibata Katsuie. The latter was defeated at the Battle of Shizugatake in 1583 and committed seppuku.

But the most dangerous opposition to Hideyoshi’s rule came from Oda Nobukatsu, the second son of Oda Nobunaga, who was supported by none other than Tokugawa Ieyasu. The two armies collided in the indecisive Battle of Komaki and Nagakute in 1584. Following this confrontation, Hideyoshi made peace with Nobukatsu and Ieyasu, the latter becoming the “number two” of Toyotomi’s regime. It was the only time two of the three great unifiers came to blows after the Battle of Okehazama.

Over the following years, Toyotomi Hideyoshi was made Imperial Regent. In 1585, he subjugated Kii Province from the Negoro-gumi warrior monks. Meanwhile, in the same year, Toyotomi’s armies subjugated Shikoku Island and the provinces of Etchu and Hida. Hideyoshi also conquered Kyushu Island from the Shimazu Clan in 1586. Finally, in 1590, he completed the conquest of Japan by subjugating the Hojo Clan.

If the first years of Hideyoshi’s rule were fruitful and prosperous, his final years were a complete disaster. The death of his firstborn son Tsurumatsu in 1591 made him highly paranoid and overprotective of his second son and heir, Hideyori. Hideyoshi ordered his nephew Hidetsugu to commit suicide and executed all of the latter’s family in 1595. Moreover, he was also extremely intolerant of Christianity.

In 1592, Toyotomi Hideyoshi launched an invasion of Korea. His main objective was to conquer the peninsula in order to push further into China. For six years, the Imjin War raged between Japan on one side and Joseon Korea and Ming China on the other. Successful at first, Japanese troops progressively found themselves repulsed and confined to the south of the country. On the sea, the Korean navy, led by Lee Sun-Shin, completely destroyed the Japanese fleet.

These disasters impacted Hideyoshi’s health. In September 1598, the second unifier of Japan died, leaving a council of five regents to rule in his son’s name until he came of age. Among the regents was Tokugawa Ieyasu, the final unifier of Japan.

7. Tokugawa Ieyasu Betrayed the Other Regents

Hideyoshi’s final years left many Daimyos dissatisfied with the Toyotomi Clan and deeply opposed to the under-aged Hideyori. Moreover, the council of regents was fast to disintegrate, as each lord defended his own interests. The breaking point happened when Maeda Toshiie, the eldest and most respected council member, died in 1599.

Following Maeda’s demise, Ieyasu gathered an army and marched on Osaka Castle, the residence of the Toyotomi Clan, with the pretense of protecting the ruling family. This move angered most of the remaining regents, while influential Daimyos started gathering support against the Tokugawa Clan. This opposition was centered on the powerful Ishida Mitsunari. Thus, Japan was divided once more.

War broke out when Uesugi Kagekatsu, another regent, started building up an army in Aizu with the support of Mitsunari. This move prompted Ieyasu to act, and soon enough, the Tokugawa and Mitsunari forces clashed. In October 1600, Tokugawa Ieyasu won the decisive Battle of Sekigahara, becoming the sole regent.

Over the next few months, he dismissed Hideyori and became the de-facto ruler of Japan. Meanwhile, in 1603, he was made Shogun by the Emperor, thus ushering in the Edo Period, marked by the rule of the Tokugawa Shogunate.

8. Tokugawa Ieyasu Was the Last of the Three Great Unifiers of Japan

The founding years of the Tokugawa Shogunate were quite tumultuous. Tokugawa Ieyasu did not stay Shogun for long. In 1605, he abdicated in favor of his son, Tokugawa Hidetada. This tradition was adopted by the Tokugawa Clan for two more generations, thus avoiding bloodshed over succession.

Despite his resignation, Ieyasu remained the real power behind his son until his death in 1616. From 1605 to 1614, the Tokugawa leader strengthened the position of his clan, especially against the remainders of the Toyotomi Clan, who were gathering behind the deposed Hideyori in Osaka.

In 1614, Ieyasu marched on Osaka Castle a second time and conquered it the following year. He launched a brutal execution campaign against the Toyotomi Clan members, which saw its annihilation.

In his final years, Tokugawa Ieyasu emitted two documents that established clear supervision of court Daimyos and military houses. These legal works, known as Kuge Shohatto and Buke Shohatto, were the first stones of the complex social system of the Edo Period, which helped prevent internal conflicts.

Nowadays, Oda Nobunaga, Toyotomi Hideyoshi, and Tokugawa Ieyasu are celebrated as the three great unifiers of Japan. Despite their acts of unimaginable cruelty, their decisive actions contributed to the reunification of Japan after nearly 150 years of continuous unrest.

Oda Nobunaga: 11 Facts on the Ruthless Samurai who Reunified Japan

Toyotomi Hideyoshi: From Peasant to Ruler of Japan (9 Facts)