HomeStoriesCzechoslovak Legion: Marching to Freedom in the Russian Civil War

Czechoslovak Legion: Marching to Freedom in the Russian Civil War

Having joined the Russian army to win independence for their country, the Czechoslovak legion found themselves in the bloody crossfire of the Russian Civil War. 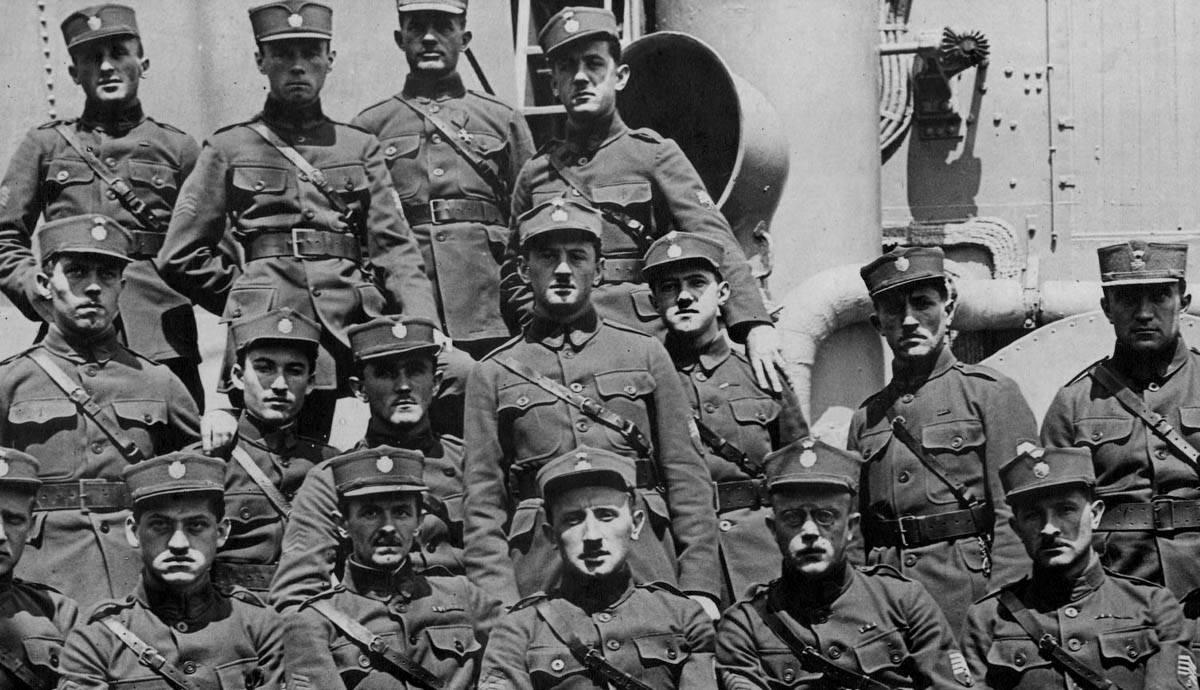 Originally parts of the old Bohemian and Hungarian kingdoms, the Czech and the Slovaks became subjects of the Habsburg archdukes of Austria starting in the 16th century. 300 years later, all the territories which now form the modern Czech Republic and Slovakia were parts of the Austrian Empire.

However, the rise of Napoleonic France and its direct support of minorities living under the rule of foreign powers ignited early fires of Slavic independence movements in all of central Europe. During the 19th century, Czech, Slovaks, and other minorities under Habsburg hegemony rose in rebellion against their rulers, demanding their own nations on their ancestral lands.

Before The Czechoslovak Legion: The Rise of Slavic Nationalism

By 1848, as various revolutions erupted all around Europe in what is remembered today as the Springtime of the Peoples, the Slavs, Romanians, Hungarians and other people subjected to Vienna overthrew Emperor Ferdinand I. A Russian intervention in August 1849 managed to save the Habsburg monarchy, but nonetheless, the minorities gained some minor victories such as the abolition of serfdom and an end to censorship. Additionally, the Empire’s name ultimately changed to “Austria-Hungary” under the rule of Franz Joseph I.

But the reforms of 1849 were not enough to quell the fires of nationalism. During the entire second half of the 19th century, various minorities continued to plot for independence. Additionally, Austrian neutrality during the Crimean War, which opposed Russia to a coalition made up of Great-Britain, France, and the Ottoman Empire, pushed the tsar to break his alliance with the Habsburgs. The latter found themselves isolated and progressively got closer to Prussia.

In the 1870s, Russia threatened Austrian interests in the Balkans. In 1877, the tsar intervened in favor of Slavic minorities under the Ottomans, decisively defeating Turkish armies and barely hiding his intentions to do the same in Austria-Hungary should the Slavic minorities living there call for his aid. Emboldened by Russian support, Czechoslovak minorities continued their fight for independence.

The Czechoslovak Legion In World War I

The famous assassination of Archduke Franz Ferdinand in Sarajevo by a Serbian nationalist in June 1914 ignited the fire for World War I. Promising independence for Czechoslovakia, Russia secured more than 40,000 volunteer soldiers under the banner of the Czechoslovak Legion.

In October 1914, this battalion was attached to the 3rd Russian Army and sent to the Southwestern front. The Czechoslovak Legion took part in operations all over modern-day Belarus, Poland, Ukraine, and Romania. The legion participated in the infamous Brusilov Offensive, which stopped German and Austrian progress in Ukraine and Galicia.

The Czechoslovak legion continued fighting alongside the Russian Army after the February Revolution, which saw the fall of Tsar Nicholas II and the emergence of the Provisional Government. The latter allowed more liberties to the Czechoslovaks, who recruited additional men and reorganized themselves into rifle regiments. Shortly after the Revolution, Tomas Masaryk, chairman of the Czechoslovak National Council, arrived in Russia. In July 1917, the legion took part in the Kerensky Offensive and contributed a great deal in the victory at the Battle of Zborov.

Despite the victory at Zborov, the Kerensky Offensive was a failure. Moreover, the inability of the Russian Provisional Government to assert authority led to growing instability, dominated by the Bolsheviks’ attempts at seizing power. In November 1917, under the leadership of Vladimir Lenin, the communists finally succeeded in overthrowing the government, taking power in Moscow and Saint-Petersburg, and opening the stage to the Russian Revolution and later Russian Civil War.

The Russian Civil War: The Rise of the Bolsheviks

The Bolsheviks began peace talks with Germany as early as November 1917. In the meantime, Russian authorities were planning to evacuate Czechoslovak forces through the Trans-Siberian railway to Vladivostok on the Pacific, from where they would be transported to Western Europe to continue the fight.

However, negotiations between Russians and Germans were not going as well as Lenin had hoped. Berlin demanded major territorial concessions, including an independent Ukraine, which would become a German protectorate. In February, the Central Powers launched Operation Faustschlag to force the hand of Moscow. One of the objectives of the offensive was to destroy the Czechoslovak Legion to stop them from joining the Western Front.

The operation was an overall success, and Lenin was forced to bend to the Central Powers’ demands. However, the Czechoslovak Legion managed to fight off an Austro-German offensive at the Battle of Bakhmach and flee from Ukraine into Soviet Russia. There, the 42,000 Czechoslovak volunteers negotiated the last details of their evacuation. On March 25th, both sides signed the Penza Agreement, which explicitly allowed the Legion to keep some of its weapons and use the Trans-Siberian railway to reach Vladivostok.

As the Soviets and the Czechoslovak Legion negotiated, armed opposition to the communist regime was being organized in the East and South of Russia. Gathering republicans and monarchists, the White Army defied Bolshevik rule and took control of large parts of the dying Empire. Soviet leadership tried to get the military support of the legion by tasking Czechoslovak communists with subverting weapons for the Red Army. Those events, alongside the evacuation process, which took more time than expected due to ongoing fighting between the Reds and the Whites on the railway, led to major tensions between Russian authorities and the legionnaires, which reached a breaking point in May 1918.

The Czechoslovak Revolt and the Occupation of the Trans-Siberian Railway

The treaty of Brest-Lutovsk signed between Soviet Russia and the Central Powers stipulated that all prisoners of war should be released and sent to their homelands. This included Hungarian soldiers loyal to the Habsburg crown who were held captive in Siberia. Their decisive meeting with the Czechoslovak legion en route for Vladivostok would be the starting point of events that would greatly impact the young Soviet Regime.

In May 1918, Czechoslovak soldiers met their Hungarian counterparts in Chelyabinsk, as both were evacuated towards their countries. A fight broke out between the two groups, slowly transforming into a full battle. Hungarian loyalists were defeated, but the accident pushed local Red army troops to intervene and arrest some Czechoslovaks.

The arrests were met with heavy resistance, which soon turned into an armed battle against the Red Army all along the Trans-Siberian Railway.

The Red Army soldiers were completely taken by surprise. By the end of June, Vladivostok fell to the Legion, who proclaimed the city as an “allied protectorate,” making it a landing point for Japanese, US, French, and British troops coming to aid the White Army. By mid-July, the Czechoslovak Legion, alongside its White allies, managed to take control of all of the cities on the Trans-Siberian from Samara to the Pacific. As Allied forces closed in on Yekaterinburg, where the last Tsar Nicholas II and his family were hiding, Bolshevik forces promptly executed them before evacuating the city. By August 1918, Czechoslovak forces and the White Army managed to capture the Russian Imperial Gold Reserve.

By September 1918, the Red Army launched a massive counter-attack on the Siberian front. The lack of central command in the White Army simplified the progress of the Bolsheviks. The Soviets managed to retake Kazan and Samara by the start of October, pushing back the Czechoslovak Legion and their allies.

These defeats, alongside the declaration of independence of Czechoslovakia in Prague on the 28th of October, diminished the fighting spirit of the volunteers. The latter ended up losing trust in their White allies when the controversial Admiral Alexander Kolchak – famous for his distaste of foreign soldiers – imposed his rule on the remainder of anti-communist opposition in Eastern Russia.

By the start of 1919, Kolchak ordered the redeployment of foreign soldiers fighting in the White Army on the Trans-Siberian Railway between Novonikolayevsk and Irkutsk. As the Red Army progressed, desertion and pro-communist activity grew behind the White lines. Overwhelmed, the Czechoslovaks declared their neutrality, not taking part in any fighting anymore.

Pressure from the Red Army forced the Admiral’s government to retreat from Omsk with the Imperial Treasure. As the train carrying Kolchak approached the town of Nezhneudinsk, the Bolsheviks pushed further, almost catching up to the White commander. The latter was deserted by his bodyguards and left to the mercy of locally deployed Czechoslovak soldiers and of the French General Maurice Janin, Commander of the Allied Military Mission in Siberia. In January 1920, rather than escort Kolchak to Vladivostok, General Janin and the Czechoslovak Commander Jan Syrovy surrendered him to the 5th Red Army. On the 7th of February, they were allowed safe passage to the Pacific by the communist authorities.

The Czechoslovak Legion’s Evacuation From Vladivostok and the Aftermath

On March 1st, 1920, all Czechoslovak troops were beyond the city of Irkutsk. One last obstacle remained on the way, in the form of White Army divisions and their foreign allies, who stalled the movements of the trains carrying the Legion to get a better strategic position in the upcoming fight against the Red Army. The Czechoslovak soldiers finally reached the city of Vladivostok in the summer of 1920, and the last soldiers were evacuated in September of the same year.

More than 4,000 Czechoslovak soldiers died fighting during World War I and in the Russian Civil War. An unknown number of troops went missing or deserted the Legion, making a hazardous stroll towards Czechoslovakia through the front lines or joining the Czechoslovak communists.

Most of the troops that made up the Legion went on to form the core of the Czechoslovak army. Some of the soldiers even occupied key political positions, such as Jan Syrovy, the country’s prime minister, from September to December 1938. Nowadays, the Czechoslovak Legion is still celebrated in both the Czech Republic and Slovakia as a major source of national pride.