After experiencing the horrors of World War I, many German artists depicted fear, anxiety, and violence to show its devastating effects on postwar Germany. 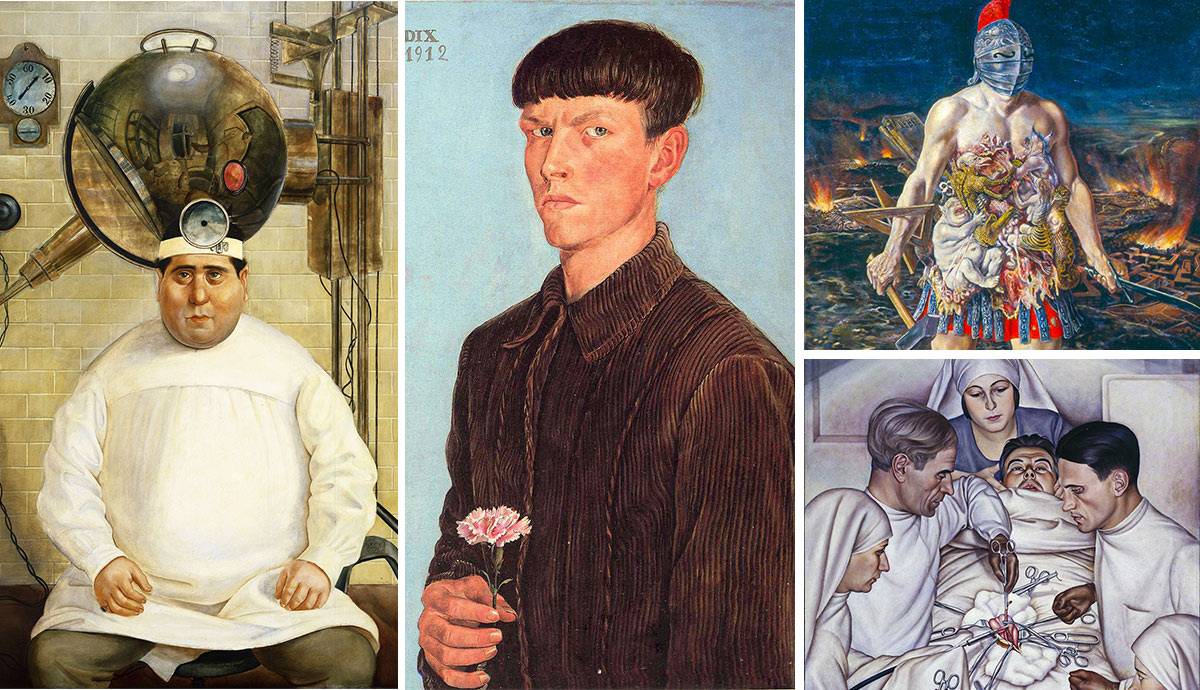 By the end of World War I, millions of soldiers were lost in the battlefield, and the way societies related to the military conflict was changed. Many German artists and intellectuals, such as Otto Dix and  George Grosz, volunteered for service, inspired by what they saw. They captured the effects of World War I. These artists were united in their belief that art could be a political weapon, showing the war with utter clarity. Bold, new, avant‐garde movements such as Expressionism, Dadaism, Constructivism, Bauhaus, and New Objectivity emerged during this turbulent period.

New Objectivity in the Weimar Republic After World War I

From 1919 to 1933 in Germany, former soldiers dedicated themselves to presenting the true nature of war in a movement called Neue Sachlichkeit, or ‘New Objectivity.’ The movement took its name after the exhibition Neue Sachlichkeit held in Mannheim in 1925. This exhibition surveyed the post-Expressionist work of various artists including George Grosz and Otto Dix, two of the greatest realist painters of the twentieth century. In their works, they vividly depicted the corruption of Germany following its defeat in the war. This movement was trying to objectively show the war without any propaganda. It essentially ended in 1933 with the fall of the Weimar Republic, which governed until the rise of power of the Nazi Party in 1933.

Most of the artists associated with New Objectivity served in the German army during World War I. As opposed to the abstract elements of Expressionism, representatives of the New Objectivity movement presented an unsentimental realism to address contemporary culture. While varied stylistic approaches were still apparent, all of these artists focused on an objective view of life, portraying a tangible reality. Many artists expressed their ideas about art, regarding the direction that German society was taking in the years after World War I. In terms of ideas, they embraced realism, using a new visual language, including a nostalgic return to portraiture. Each artist had his own take on “objectivity.”

Max Beckman, A War Veteran of World War I

One of the most respected German artists of the 1920s and 1930s – Max Beckmann. Along with George Grosz and Otto Dix, he is considered one of the most important artists of the New Objectivity. He executed various artworks during and after World War I, including the Family Picture (1920). He was a volunteer for the ambulance driver, which made him so shattered because of what he was seeing happen. Through his paintings, Max Beckmann expressed the agonies of Europe and the decadent glamour of the Weimar Republic’s culture.

Max Beckmann painted this picture of his family shortly after the end of World War I. In the center, his mother-in-law, Ida Tube, covers her face in despair, while the other women are also lost in their melancholy. The artist appears sitting on the couch, waiting for his first wife to finish primping before the mirror. He has captured the feeling of the bleakness of the impending war, inside and outside of the house.

George Grosz was a cartoonist and a painter, with a strong rebellious streak. He was drafted into the army and he was strongly affected by his wartime experience. Having chronic physical disorder got him out of the army shortly. During his early career, he was Influenced by Expressionism and Futurism, he also joined Berlin’s Dada movement and was also associated with the New Objectivity movement. One typical example of the New Objectivity movement is his ”Funeral: Tribute to Oskar Panizza.”

This painting features chaotic, overlapping figures in a night scene.  Grosz dedicated this artwork to his friend Oskar Panizza, a painter who refused the draft and was consequently put in a lunatic asylum until he came to his senses. In the bottom left part, there is a leading figure, a priest brandishing the white cross. However, the centerpiece of the painting is a black coffin surmounted by a jaunty skeleton. This is the perspective of Grosz regarding World War I and his frustration toward German society.

Another great German artist, known for his remarkable depiction of World War I, was Otto Dix. Son of a foundryman, a working-class lad, he served in the German army during World War I. When the war broke out, he had enthusiastically volunteered to fight. In the fall of 1915, he was assigned to a field artillery regiment in Dresden. Dix soon began to move away from Dada towards a more socially critical form of realism. He was deeply affected by the sights of the war and his traumatic experiences would appear in many of his works. His take on the war was completely different from that of other artists. Otto Dix wanted to be objective yet he was shaken by what he was seeing happen to the German society.

The ‘War’ is one of the best-known depictions of the horrors of the war in the 20th century. Dix started to paint this painting in 1929, ten years after World War I. During these years, he had time to absorb the reality of what he went through in its true perspective. On the left of the painting, German soldiers are marching off to battle, while in the middle, there is a scene of mangled bodies and ruined buildings. On the right, he’s picturing himself rescuing a fellow wounded soldier. Under the triptych, there is a horizontal piece with a lying soldier probably sleeping for eternity. It’s evident that war profoundly affected Otto Dix, as an individual and as an artist.

The brilliant painter Ernst Ludwig Kirchner was a founding member of Die Brücke (The Bridge), a german expressionist movement. The group intended to create a link between classical motifs of the past to the present avant-garde. At the beginning of World War I in 1914, Kirchner volunteered to serve as a truck driver, however, he was soon declared unfit for the military due to his psychological breakdowns. Although he never actually fought in the war, he did see some of the atrocities of World War I and incorporated them into his works.

In his 1915 painting ‘Self-Portrait as a Soldier’, he depicts his experience of World War I. Kirchner is seen dressed as a soldier in uniform, in his studio with an amputated bloody arm and an androgynous nude figure behind him. The severed hand is not a literal injury but a metaphor that meant he was injured as an artist, representing his inability to paint. The painting documents the artist’s fear that the war would destroy his creative powers. In a broader context, it symbolizes the reaction of the artists of that generation who suffered physical and mental damage because of World War I.

Rudolf Schlichter and the Red Group in Berlin

The painting “Blind Power” features a warrior holding a hammer and a sword while he marches towards an abyss. Mythical beasts have sunk their teeth into his naked torso. In 1932, Schlichter first painted “Blind Power”, in a period when he was closely associated with Ernst Jünger and the National Socialists. But, in the 1937 version, he reinterpreted the meaning of the painting as resistance and accusation against the National Socialist regime.

Christian Schad was one of the artists of this style who captured the emotions, socioeconomic changes, and sexual freedom that filled Germany after World War I. Although he was not included in the 1925 Mannheim exhibition of New Objectivity, he is strongly associated with this movement. His life is connected to the centers of the European avant-garde: Zurich, Geneva, Rome, Vienna, and Berlin. In 1920, the German artist, Christian Schad began to paint in the style of New Objectivity. Before his involvement with New Objectivity, Schad had been associated with Dada. Among the popular themes that he depicted were nude women, genitalia, low-cut dresses, transparent clothes as well as sexual activities.

German artists of the time tried to capture the social life after World War I in all its gritty reality. With his Self-Portrait of 1927, Schad depicts this cold reality, rejecting the distortions used by Expressionist artists before him to represent emotional states. He describes exactly the sexual freedom of Berlin’s modern society by putting himself in front looking directly at the viewer, while a passive female nude lays behind him.

In 1927, Christian Schad finished his well-known artwork, the ‘Operation.’ The appendix operation is an atypical topic for the 1920s, among all the portraits and nudes. Schad’s interest in this medical theme was awakened by an encounter with a surgeon in Berlin. Schad places the appendix as the center of action in the middle of the painting. He portrays a patient on a table, surrounded by doctors and nurses as surgical instruments lay atop his torso. Despite the bloody red color of surgeries, the only blood is the redness in the middle of the patient’s body and a couple of bloody cotton swabs. White color dominates in extremely finely painted warm and cool shades.