HomeArtWhat Is the Dada Art Movement?

What Is the Dada Art Movement?

If there’s one word that sums up the Dada art movement, it would probably be “nonsensical.” The point was for it not to make sense. 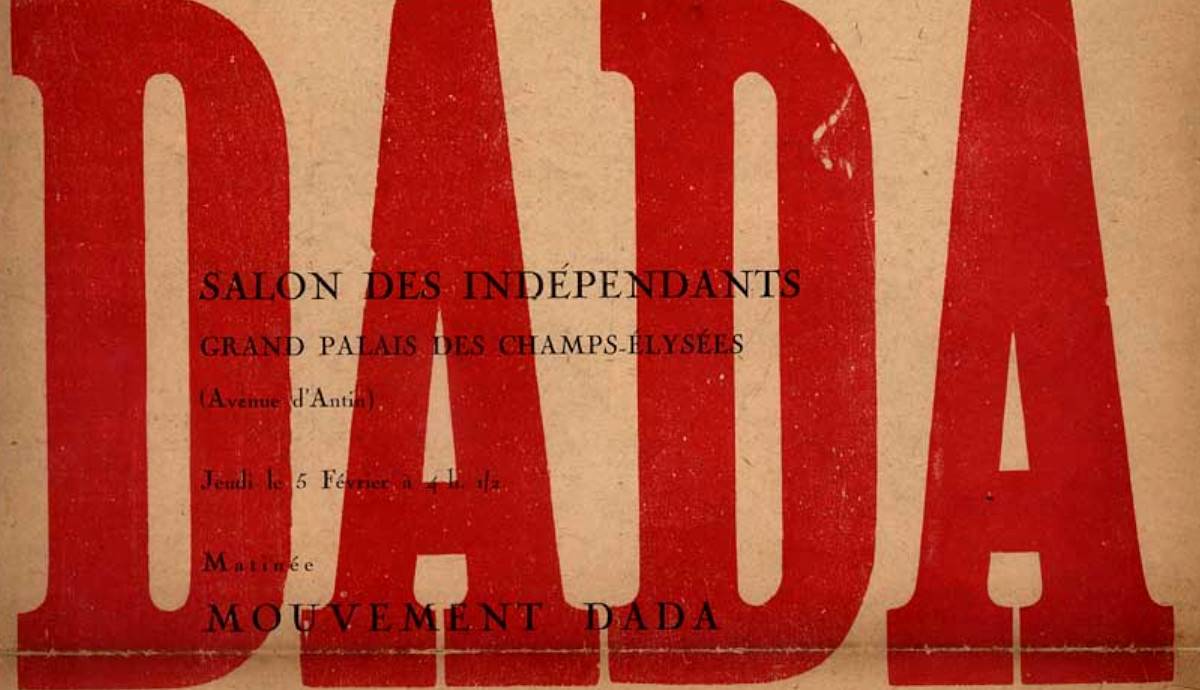 If there’s one word that sums up the Dada art movement, it would probably be “nonsensical.” The point was for it not to make sense. Originating in Zurich after World War I, Dadaist art was often satirical and didn’t seem to have a point.

Dada artists aimed to destroy the traditional values of art and question everything after the atrocities of the war. World War I was one of the deadliest conflicts the world had ever seen and, at the time, it was a shock.

So, in a nutshell, the Dada art movement was anti-war, anti-establishment, and anti-bourgeois. It even became anti-itself, but more on that later.

Dadaism sprung up all around the world and had various leaders and events that shaped the movement. It was the precursor to surrealism and just as much of a political statement as it was an artistic one.

Here, we’re exploring what Dada art is, along with famous artists and work from the time and including how it shaped surrealism and beyond.

Dada is known for being incoherent and irreverent and it began to unfold in the late 1910s. One of the founders of the Zurich-based Dadaist movement, Jean (Hans) Arp was among various artists and writers from all over Europe who fled to Switzerland to escape the turmoil of World War I.

The people who made up this first Dadaist group came from Germany, Romania, Sweden, and Switzerland, founding their headquarters called Kunstlerkneipe (Cabaret) Voltaire in February 1616. It was named after Voltaire, the French satirist who served as inspiration for Dada art.

At Cabaret Voltaire, the artists would stage strange and nonsensical performances, written in gibberish and a blend of languages with elaborate costumes and masks to make it truly over the top.

It was a mess of incoherence. But that was the point. It wasn’t supposed to make sense. The pandemonium present in Dada was a way of acting out the crisis of World War I and its aftermath. There’s no way to logically explain why 16 million people died as a result of the war. So instead of trying to make sense of things, Dada went in the opposite direction.

Dada artists felt that rationality and the false sense of order proceeding the war were what led to its eventual outbreak. They were anarchists in every sense.

But, Dadaist art didn’t flourish only in Zurich. It was an international movement that was also seen in Paris, Berlin, Cologne, Hanover, and New York. Journals like Litterature, dadaco, Dada Almanach, and Dada Cino were published and helped tie the movement together across oceans and borders.

Dada artists moved all over, too, especially after the war, and these different regional groups intermingled and further spread the message of Dada rebellion.

Man Ray (Emmanuel Radnitzky) was another important leader in the Dadaist movement. He was a New Yorker but spent much of his career in Paris. He befriended Marcel Duchamp and was known for combining everyday items in strange ways. It seems everyone knew everyone in the Dada world.

It should be made clear that Dada isn’t representative of one style, but instead a combination of various mediums, approaches, and genres. Sometimes, Dada art contradicts itself, but they remain tied together under the umbrella of meaninglessness and revolt.

Dadaists were even against themselves and one of their favorite sayings was, “Dada is anti-dada.” Talk about being anti-everything. They weren’t kidding.

Still, collage was a favorite between Dadaist artists, for obvious reasons, by mixing and matching various images, texts, and mediums. Even the name “dada” was a sort of experiment in collage art. It was supposedly chosen at random from a German/French dictionary.

See, it makes no sense. Again, that’s the point.

The Dada art movement was short-lived and it fizzled out by the early 1920s. Many of its members went on to participate in the Surrealism movement that came sweeping in at the time with the influences of Freud and various Surrealist manifestos.

Surrealism has similar values to Dadaism but perhaps it’s a bit more focused. Still, the influences of Dada can be felt even today. Some even say that the ridiculous memes we see floating around our social media feeds these days are modern-day Dada art. And who’s to argue?

As the world around us seems to make less and less sense while we desperately struggle to cling to our reason and rationality, Dadaists take a somewhat nihilistic approach to expressing themselves. It’s not unreasonable to expect Dada art to resurge time and time again as people continue to wrap their heads around the absurdity of reality.

So, asking to define the Dada art movement is a relatively impossible feat. It’s everything and nothing. Dada isn’t even Dada. It’s contradictions and confusion. Just like the chaos of our everyday lives.