Hugo Ball was a German artist who focused his creativity on performing arts. He opened Cabaret Voltaire a performing arts space that became, essentially, the beginnings of the Dada movement. 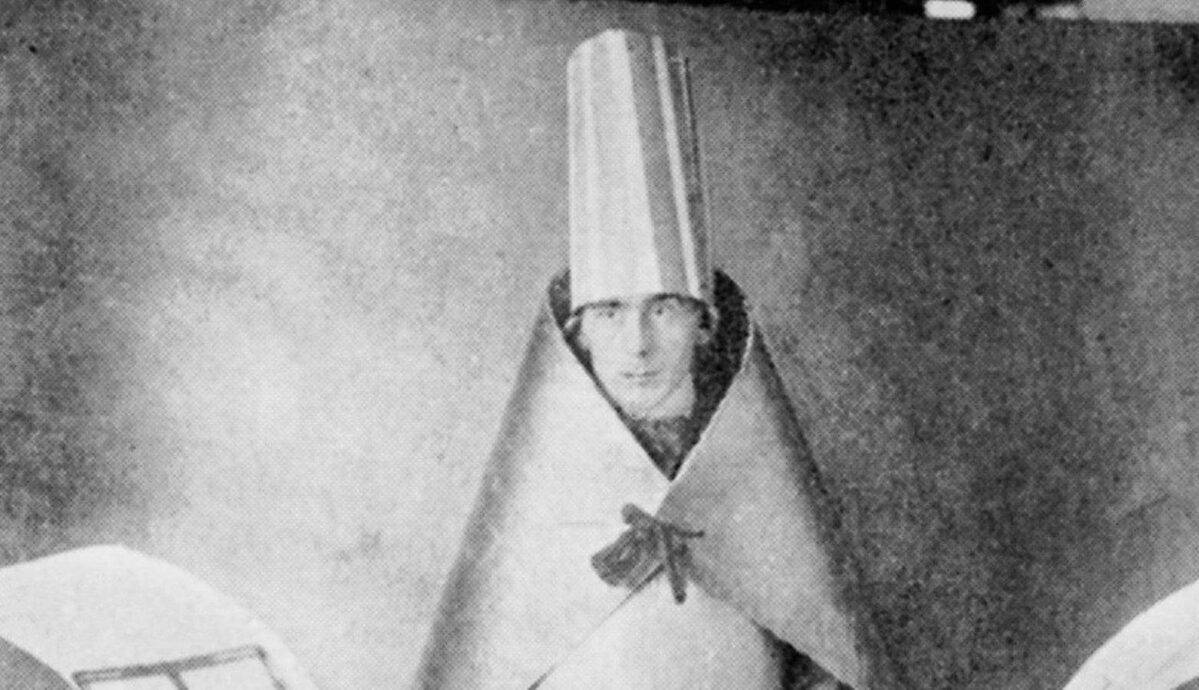 Hugo Ball was born in Pirmasens, Germany on February 22, 1886. He grew up in a middle-class, Catholic family. After moving to Munich and then Heidelberg, Ball studied sociology and philosophy. After his more formal studies, he moved to Berlin with large dreams. He wanted to be an actor and studied the craft.

His penchant for the performing arts did not stop him from the desire to fight for his country. Ball tried to join the military as a volunteer during World War I but was denied due to medical reasons. Later on, Ball witnessed the invasion in Belgium. Feeling helpless and unable to do anything about the situation, he became extremely disillusioned with the war.

After seeing Belgium’s invasion, Ball declared that, “The war is founded on a glaring mistake, men have been confused with machines.” The idea that humans are no more than cogs in a fighting machine and the absurdity surrounding that idea came to a head later in his artistic career.

Now considered a traitor in his country, Ball settled in Switzerland, which was considered a neutral territory. He left his country with cabaret performer Emmy Hennings. Ball would later marry this woman in 1920. It is important to note that Emmy Hennings was as involved in the art scene as Ball, and an acclaimed artist in her own right.

He continued to study and find interest in anarchist philosophy, though he did not agree with its more militant aspects. Regardless, he saw it as a necessary step to further socio-political enlightenment.

The Cabaret Voltaire opened on February 5, 1916 in Zürich, Switzerland. At this time, Switzerland was a war neutral country and Hugo Ball and Emmy Hennings were residents.

The location that became The Cabaret Voltaire, Spiegelgasse 1, already hosted a literary café. Hennings and Ball approached the owner of the space to ask about their own use. They were given the back room to host cutting-edge performances. These performances usually involved a combination of dance, acting, spoken word, and music. The genres were bent and changed to push the limits of performing arts.

The Cabaret was not open long but it went on to host important performances and renowned many artists. The nights were rambunctious and new, a breakthrough for art in general.

The Cabaret Voltaire is still open today. It is now a museum, gift shop and a coffee house. Sometimes, there are still performances in the back if you attend on the right night.

Hugo Ball performed his sound poetry at the Cabaret Voltaire. These readings exemplified what Dada was all about. They were new, nonsensical, ironic, but also extremely self-conscious of their purpose. Dada’s purpose was highlighting the insanity that was going on in society.

Sound Poetry combines literary composition in a way that creates a new sort of language. The sounds are heard but they lack inherent meaning besides their musicality. Ball has said that the incomprehensible nature of his poetry reminded him of attending Catholic mass as a child. The words made sounds but had no real meaning to his ears.

Karawane and Katzen and Pfauen

Hugo Ball performed his sound poetry Karawane in 1916 and then Katzen and Pfauen in 1916. They consisted of incomprehensible sounds, not words with meaning. Ball was no amateur to theater and performance when he took the Cabaret Voltaire stage. He had previously studied acting in school. This being said, the art came from the sounds and this lack of meaning, not his acting skills.

Ball also wore interesting costumes, such as the one pictured above, but this visual aspect was always considered secondary to the sound. This costume has become synonymous with the Dada movement and a classic image in art history.

In addition to his performed Sound Poetry, Ball also wrote a few other, experimental writings. This included his diary and a few scholarly works.

Hugo Ball wrote the first Dada manifesto in 1916. This manifesto was a culmination of his sentiments regarding the war and society. The manifesto discusses the terrible state of society as well as his dislike for previous philosophy.

He was directly involved with the movement for about two years. During this time he worked as a journalist for Die Freie Zeitung. His involvement with the Cabaret Voltaire is also intimately connected to the historical significance of Dada. His performances successfully articulated the movement’s radical nihilism and iconoclastic ideology.

Later in his Life

In sharp contrast to the avant-garde life that Ball had been living, in 1920 he returned to his Catholic faith. At this time, Ball and Hemmings retired in a small village in Switzerland. Here he connected with the early medieval Christian saints. He immersed himself in their mysticism and dedicated the later portion of his life to this.

Between 1920 and 1930, Ball revisited some of his diaries from the previous decade. These were later published under the title Die Flucht aus der Zeit (Flight out of Time). This writing has since provided a wealth of information regarding the Dada movement, its key players, and its overall purpose.

His Death and Beyond

Ball died in 1927, at only 41 years old. By this time, he was a poor, religious zealot. He was mostly forgotten by the art world at large. Almost 100 years later, art enthusiasts and historians can look back at his work and acknowledge him for his success.

Along with Emmy Hennings, Hugo Ball was one of the original leaders of the Dada movement. Dada ultimately changed the course of what we consider art, expanding the definition beyond visual aesthetics. His performance art encompassed the movement’s ideas and his writings helped preserve it for future generations to study.