From 1467 to 1615, Japan went through a period of continuous social unrest and civil war, remembered today as the Sengoku Jidai. 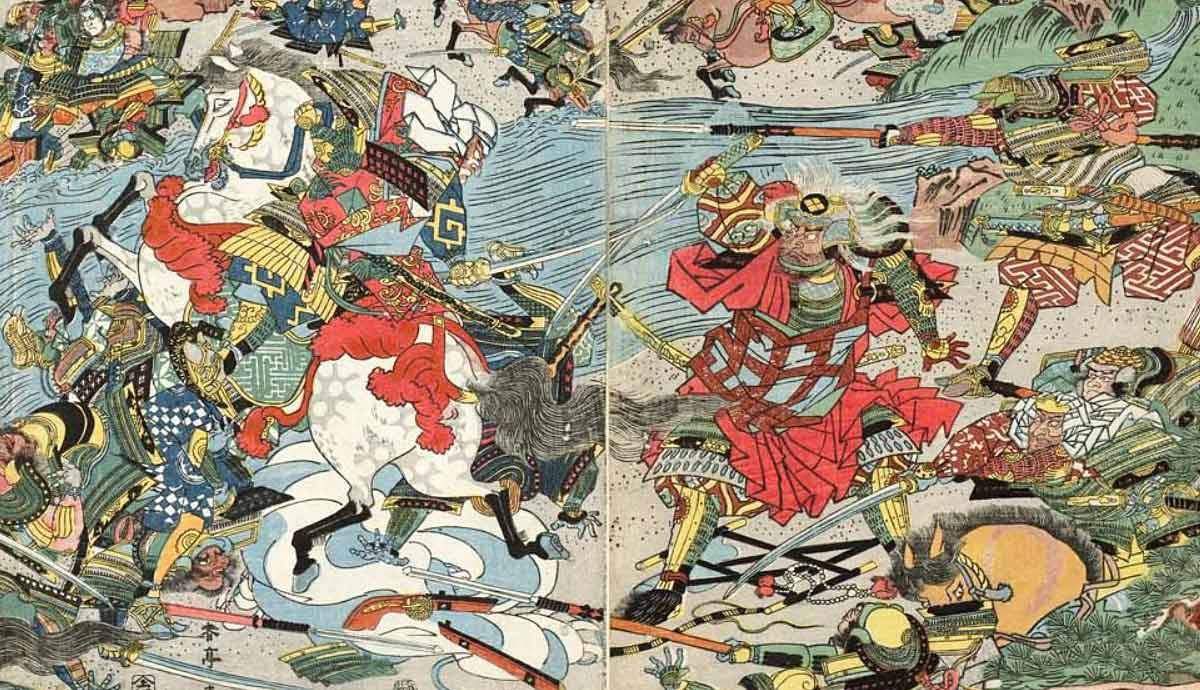 Since the late 12th century, the emperors of Japan had relinquished political powers to various military governors known as Shoguns. While the monarchs held some form of spiritual power and were mainly occupied with arts and leisure, dynasties of shoguns ruled supreme.

Following the emperor’s brief return to political power in 1333, the Ashikaga clan managed to firmly gain central governorship in 1336. The Ashikaga Shogunate reigned over Japan for more than two centuries. In 1464, a dispute between various local feudal lords known as Daimyos evolved into a full-blown civil war in 1467. This was the beginning of a long era of civil unrest and turmoil known as the Sengoku Jidai, or the “Japanese Warring States Period,” which will reshape the face of Japan for centuries to come.

The Onin War: The First Stage of the Sengoku Jidai

In 1464, the Shogun Ashikaga Yoshimasa named his younger brother Ashikaga Yoshimi as heir. But one year later, Yoshimasa’s wife, Hino Tomiko, birthed a son, Yoshihisa. While the reigning Shogun supported his brother’s claim, his wife pushed for the nomination of her son as heir.

Both Tomiko and Yoshimasa had the support of strong local clans such as the Hosokawa and the Yamana. In 1467, small fights erupted between the two factions in the Imperial Capital Kyoto. This dispute became increasingly violent, and other powerful clans emerged to try and seize power and influence over the main belligerents. This was the beginning of the Sengoku Jidai.

For ten years, the Hosokawa and Yamana fought for dominance over Kyoto in what is known today as the Onin War. However, the conflict did not spread outside of the capital, which allowed far-away Daimyos to grow in power and influence and rule their lands in a nearly fully independent manner.

Loyalties changed several times during the conflict, and by 1477, the Hosokawa gained complete influence over the Ashikaga clan. In an ironic turn of events that relays the complexity of feudal Japan, the Hosokawa made Tomiko’s son, Ashikawa Yoshihisa, Shogun.

The rise of influence of regional Daimyos contributed to the proliferation of unrest, as various lords started skirmishing against each other over small pieces of land. In 1484, a peasant revolt in the province of Kaga led to the emergence of an order of warrior monks known as Ikko Ikki. The latter would control the region for decades to come and play a significant role in Japanese politics until the end of the Sengoku Jidai.

The years that followed the Onin War and the Kaga Rebellion were marked by continuous unrest. The ruling Ashikaga shoguns gave more and more power to their Hosokawa Kanreis (deputies), whose position was envied by other clans such as the Hatakeyama. Under their leader Masanaga, the Hatakeyama clan challenged Hosokawa dominance from 1486 to 1493, when they were decisively defeated by Kanrei Hosokawa Masamoto. This clash for power led to the emergence of other major provincial powerhouses, such as the Hojo Clan in the Izu Province.

Masamoto managed to firmly keep influence over the Shogun in Hosokawa hands, but his rule beyond the capital was symbolic at best. As was usual during the Sengoku Jidai, warlords rose all around the country, and the Hosokawa had to fight many small wars with neighboring clans. Victorious in most of his campaigns, Masamoto managed to stabilize the Hosokawa position, but his failure to produce an heir led to instability and internal conflicts.

Hosokawa Masamoto adopted three sons–Sumiyuki, Sumimoto, and Takakuni–and continuously changed his preference on who shall succeed him. In 1507, supporters of Sumiyuki killed the Kanrei as he was taking his bath. This event is known today as the Lord Hosokawa Incident, which unleashed the Ryo Hosokawa Civil War, another major episode of the Sengoku Jidai.

Sumiyuki was named Kanrei by the Ashikaga Shogun. But his evident guilt in the murder of his adoptive father provoked the ire of Sumimoto and Takakuni. With the help of the vast majority of Hosokawa retainers and the Hatakeyama Clan, Takakuni launched a lightning attack on Kyoto. With no prospect of victory, Sumiyuki took his own life, thus honoring the Bushido Code of Honor. But the Ryo Hosokawa Civil War had just begun…

The alliance between Sumimoto and Takakuni was not long since, at the time of their war against their brother, the Ashikaga clan was also divided into two factions, each vying for the title of Shogun. Ashikaga Yoshitane got the recognition of Takakuni, while Ashikaga Yoshizumi received a pledge of support from Sumimoto.

In 1508, Sumimoto and Yoshizumi abandoned Kyoto and were defeated one year later after trying to conquer it. Sumimoto then established a strong support base in Omi Province while taking refuge in nearby Awa. From there, he led a strong resistance against his brother, defeating Takakuni at the Battles of Fukai and Ashiyagawara in 1511.

Shortly after, Takakuni was pushed out of Kyoto and took refuge in Tanba Province. Sumimoto and Takakuni continuously clashed in the following years, with the latter suffering more defeats than his brother.

Despite his evident advantage, Sumimoto failed to gain a decisive victory. Little by little, Sumimoto’s allies turned on each other, allowing Takakuni to trap and decisively defeat his foe at the Battle of Toji Temple in 1520. Sumimoto was spared but exiled to Awa Province, where he died shortly after.

For a time, it seemed that power was gathered firmly in the hands of Hosokawa Takakuni, but Sumimoto’s retainer, Miyoshi Motonaga, declared the seven-year-old Hosokawa Harumoto, Sumimoto’s son, as head of the clan.

In 1527, the conflict turned in Motonaga’s favor when his allies pushed Takakuni out of Kyoto. In the following years, Motonaga inflicted defeat after defeat on Takakuni, who died in battle in 1531. Fearing usurpation, Harumoto, who was by this time a young man, gained the support of the Ikko Ikki and assassinated Motonaga. In 1532, Harumoto became the official Kinrei to the Ashikaga Shogunate, but the Sengoku Jidai was far from over.

The Rise of the Miyoshi & the Regional Daimyos

The Hosokawa Civil War further weakened central power. In the aftermath of the conflict, regional Daimyos had near-total independence in the governance of their regions. These lords were quick to engage in deadly warfare against each other, as shown in the ukiyo-e print above, while central authorities in Kyoto were busy fighting against their imminent neighbors.

In 1543, Hosokawa Ujitsuna, son of Takakuni, gathered an army and challenged Harumoto for power. The powerful Miyoshi Nagayoshi supported the latter. Together, they managed to keep the rebellious lord from conquering Kyoto and occupying key Hosokawa Holdings in the neighboring provinces.

1543 was also the year when Portuguese traders arrived in Japan and introduced the harquebus, an early fire rifle. This new weapon gained strong popularity among certain clans such as the Takeda, the Oda, and the Hojo, providing a change to the more typical Japanese weapons used in warfare.

As was usual during the Sengoku Period, Miyoshi Nagayoshi turned against Hosokawa Harumoto and joined forces with Ujitsuna in 1547. One year later, they defeated the Kinrei and forced him and the Ashikaga Shogun Yoshiharu into exile. This turn of events stripped the Hosokawa Clan from their influence, and the Miyoshi became the main ruling family in Kyoto.

Over the next decade, the various conflicts between regional Daimyos increased in intensity, and legendary leaders such as Takeda Shingen, Uesugi Kenshin, and Imagawa Yoshimoto made a strong name for themselves in countless battles. But one of the greatest commanders of the Sengoku Jidai was about to make his appearance and change the history of Japan for centuries to come.

Oda Nobunaga & the Unification of Japan:

While Kyoto saw struggles for influence over the imperial court, the regional wars between the Daimyos were about to take an unexpected turn. These would push the Sengoku Jidai to its final stages. In 1560, the young lord of the Owari Province, Oda Nobunaga, scored an unexpected victory against Imagawa Yoshimoto at the Battle of Okehazama. This confrontation not only ended the life of the Imagawa clan leader but also encouraged Tokugawa Ieyasu, leader of the Tokugawa clan, to join an alliance with the Oda.

From that point onward, the Oda and the Tokugawa won victory after victory and increased their respective domains. In the meantime, the Miyoshi hold on Kyoto severely weakened. Nagayoshi died in 1564 and was replaced by a consortium of several Miyoshi leaders and high dignitaries, such as Matsunaga Hisashide. The latter eventually got rid of the Miyoshi Clan in 1566 and ruled Kyoto alone.

But Mitsunaga’s rule was short-lived. In 1568, Oda Nobunaga occupied the city. In 1573, he exiled the Shogun Ashikaga Yoshiaki and became the direct ruler of Japan in the name of the Emperor. The Ashikaga Shogunate was effectively over.

In the following years, the Oda and Tokugawa Clans decisively defeated the Takeda at the Battle of Nagashino, won against the Uesugi at the Battle of Tedorigawa, and destroyed the Ikko Ikki monks. By the time of Nobunaga’s assassination in 1582, the central part of Japan was unified under the Oda Clan.

Oda Nobunaga was then briefly replaced by his assassin, General Akechi Mitsuhide, who was brought down by another of Nobunaga’s generals, Toyotomi Hideyoshi. In 1590, the latter finished the work started by Oda Nobunaga by defeating the Hojo clan and thus asserting his authority above all other regional lords.

The Final Stage of the Sengoku Jidai

After a disastrous Japanese invasion of Korea during the Imjin War, Toyotomi Hideyoshi died in 1598, leaving an underage boy as his successor. Hideyoshi established a regency of five Daimyos to rule Japan until his son came of age. The powerful Tokugawa Ieyasu was among the five regents.

For two years, the management of the state went smoothly, but cracks in the entente appeared when a dispute over the nature of the country’s administration broke out. Some regents, led by Uesugi Kagekatsu, supported the establishment of a civilian rule known as the Bunchinha. In contrast, others, led by Tokugawa Ieyasu, supported the establishment of a military rule: the Bundanha.

The dispute grew into a direct military confrontation when Uesugi Kagekatsu began restoring old forts without the consent of the council of regents. In 1600, Tokugawa Ieyasu led an army to confront his rival, but the latter got the support of the powerful Ishida Matsunari. In late October, the two parties confronted each other at the Battle of Sekigahara, as depicted in the ukiyo-e print above, which ended in a total victory for the Tokugawa leader.

From that point onward, Ieyasu became the sole regent of Japan. The next 15 years were spent hunting down the last opponents to Tokugawa rule. In 1615, the last opposition forces were crushed at the Siege of Osaka, thus asserting Ieyasu’s rule and ending the Sengoku Jidai.

Shortly after his victory, Ieyasu had all the problematic members of the Toyotomi clan murdered and assumed direct rule, establishing the Tokugawa Shogunate. This was the beginning of the Edo Period, which lasted for more than two centuries and ended with the rise of Emperor Meiji in 1868.