HomeStoriesBushido: The Samurai Code of Honor

Japanese morality and culture even today stems from one of the most misunderstood codes of conduct: bushido, or the 'Way of the Warrior.' 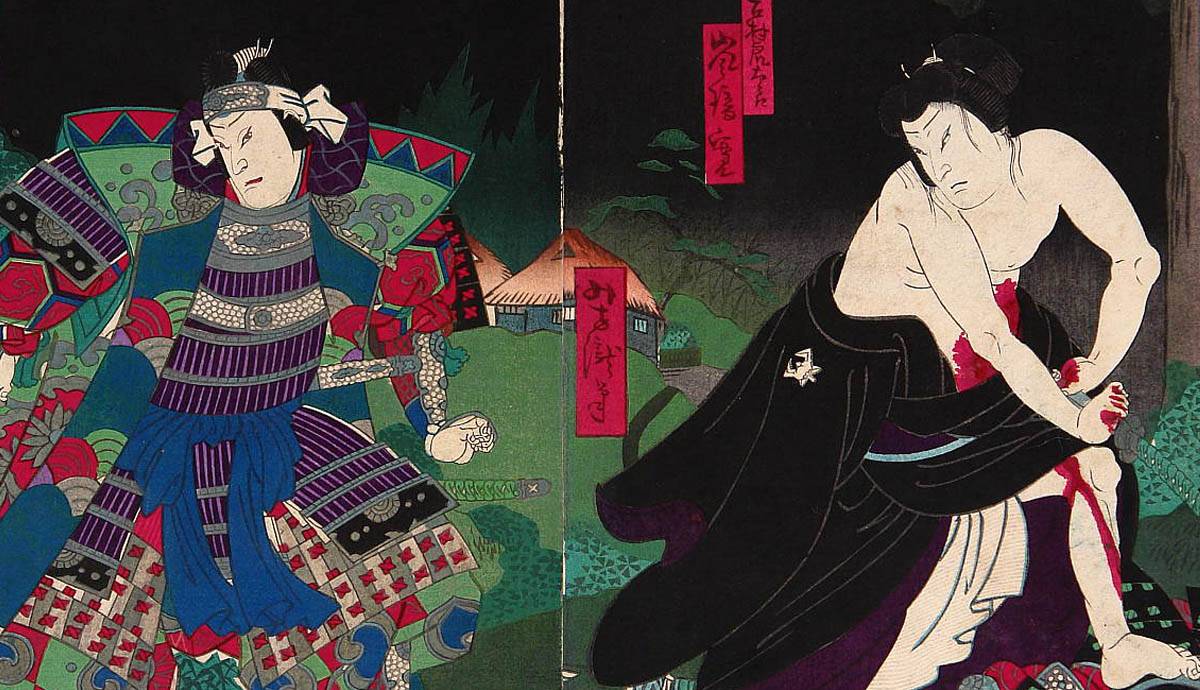 When you think of the samurai, what first comes to mind? A supremely skilled swordsman? Or the gruesome image of a dishonored warrior committing seppuku (ritual suicide)? Or a code of uncompromising loyalty to one’s feudal lord even to the point of committing reprehensible acts?

This code is called bushido, or the Way of the Warrior. To understand the basic ideas of bushido, you need to know a little history.

Bushido: The History of the Samurai

Before we go further, let’s clear up a misconception. The word samurai does not translate to “warrior”, but rather it is derived from saburau: “one/those who serve”. The word for “warrior” is bushi. This distinction will come in handy when discussing the Edo Period.

This piece isn’t meant to retell the full history of the samurai caste so we’ll touch on the basics. In the early Heian period (794 – 1185 CE), there was a northern clan called the Emishi who attempted to rebel against the then-Emperor Kanmu. The Emperor drafted warriors from other clans to help suppress the rebellion. After conquering the whole of Honshu, the Emperor gradually began to lose power and prestige though he was still revered as a religious figurehead.

Nobles allied themselves together politically, eventually supplanting the Imperial government with the bakufu, or military government. The Emperor retained ceremonial and religious power, but the bakufu held all true political power. They repelled both attempted Mongol invasions and things ran relatively smoothly for the next two hundred years.

From 1467 to 1603 the daimyo, or feudal lords, all fought one another for control over the nation with various levels of trade support from the Portuguese and the Dutch. Tokugawa Ieyasu effectively ended this period of war by vanquishing Ishida Mitsunari at the Battle of Sekigahara in 1600, solidifying the Tokugawa’s control and resulting in peace for the next 250 years. The Tokugawa regime completely closed Japan off from the rest of the world, aside from a single port at Nagasaki.

In 1854, Commodore Matthew Perry’s show of force in Tokyo Harbor started Japan on the road to modernization, which meant the abolishment of the samurai caste and the feudal system as a whole.

One of the most overarching ways to think of bushido is as a Japanese analog to the knightly code of chivalry. The word chivalry derives from the French “chevalier”: “one who owns a horse”.

There was no single set of rules that defined bushido throughout the existence of the samurai. In fact, neither a formalized set of rules nor the word itself were written down until well into the Edo period.

The samurai started out as a caste of soldiers. As such, the focus on conduct was at first related purely to battlefield valor and strength at arms. Samurai focused on mounted archery, and their code of conduct was called Kyuba-no-Michi, or the Way of the Horse and Bow. It stressed skill and bravery.

How Did it Evolve?

The method of warfare in the Heian and Kamakura periods consisted of duels between single warriors. They would announce their name and accomplishments, challenging any worthy foe to fight. The survivor took his enemy’s head and presented it to the general. An element of ancestor worship also existed as a result of Confucian ethics that carried over from Tang Chinese culture, but it was less pronounced in the early days of the samurai.

As time went on and the caste gained more power and prestige, the code transformed. Rather than being about individual valor, the emphasis shifted to filial duty to the daimyo. Warriors were expected to place the interests of their feudal lords as paramount above all else, even their own lives. The custom of individual challenges lessened. Part of the cause of this change was because of the attempted Mongol invasions.

Martial skill was still important, but it gradually began to give way to more generalized moral principles, especially during the Edo Period when there was widespread peace and samurai were more bureaucrats than warriors. One thing that distinguished the Edo Period version from the earlier versions of this code was the emphasis on spirituality, self-improvement, and learning. In Miyamoto Musashi’s famous book, Go Rin No Sho (The Book of Five Rings), one of the pieces of advice he gives is to “know the Ways of all professions”.

After 250 years of peace, the reign of the samurai came to an end with the Meiji reforms. Many former samurai turned their interests to business and industry. It was similar to the code of the Edo period; one popular saying that samurai had was bunbu ichi, which roughly meant “pen and sword, as one”. In other words, samurai were expected to be scholars as much as soldiers, if not more so, and to pursue the arts.

These are the main virtues espoused by most interpretations of the code of bushido. We’re speaking mainly about the Edo Period because that is when it is most solidified as a moral system.

Mercy (Jin): As warriors, samurai held power over life and death. They were expected to exercise this power with discretion. In other words, they were to kill only for the right reasons. Of course, what that meant varied from one person to the next.

Honesty (Makoto): The code of bushido required samurai to be absolutely truthful in word and deed. If promises were made, they were to follow them promptly and to the letter.

Loyalty (Chuugi): As mentioned, placing the interests of the daimyo before one’s own was the hallmark of this code of conduct. Some samurai, rather than become ronin, were known to commit seppuku upon the death of the daimyo whom they had sworn to serve.

Reputation (Meiyo): Everything a samurai said or did — or was perceived to have done — affected his reputation and by extension that of his daimyo. Simply being a virtuous and trustworthy servant was vital, but one must be seen and known to be so. Part of this included meticulous upkeep of one’s appearance, including sword maintenance even if the weapon was never expected to be drawn.

Courage (Yu): The Way of the Warrior called for unflinching courage, not just when facing an enemy on the battlefield, but in having the conviction to act correctly in day-to-day interactions and to make difficult decisions.

Respect (Rei): Respect to others in all situations, even if they were lower on the social ladder, was one of the most far-reaching aspects of the Warrior’s Code. One of the defining aspects of modern Japanese culture is the emphasis on respectful interactions.

Myth: Samurai believed that the sword was the only honorable weapon with which to fight.

Reality: Samurai, at least in the Sengoku period and earlier, had no compunction about using a variety of weapons, up to and including firearms. Musashi himself said, “From inside fortifications, the gun is unmatched until the ranks clash, but when swords are crossed the gun becomes useless.” Even without guns, the sword was never a primary weapon. This idea stems from Edo Period pictures and writings, when samurai wore the katana as more a badge of office than a weapon.

Myth: Bushido called upon samurai to never retreat from a battle even if the odds were hopeless.

Reality: One of the pieces of writing studied and emulated by samurai was The Art of War by Sun Tzu. In this book, one of the strategies suggested by the ancient Chinese general was to retreat if a battle was unwinnable.

Myth: Samurai wanted above all else to have an honorable death.

Reality: No well-adjusted human wants to die to the point of actively seeking it. It was instead an attitude: shinu kikai o motomo or “finding the reason to die”. This was more like determining the cause for which one was prepared to risk one’s life.

Service to one’s lord was the ultimate goal. Dying in that service was seen as honorable, but only if doing so furthered the goals of the daimyo. The idea of death-seeking comes from misunderstandings of Hagakure, or “Hidden Leaves”. The eighteenth-century samurai Yamamoto Tsunetomo encouraged readers to meditate daily and think of all the ways one could meet death.

For all we’ve spoken of the ideals of bushido as a system of morals, it has a dark underside. The theme of death permeates many aspects of it, leading to customs that most of us today would consider morally reprehensible.

The custom of seppuku, or ritual suicide by disembowelment and subsequent decapitation, is widely portrayed in samurai media. As you can imagine, this was a horrific way to die. The samurai committing the act was expected to maintain his composure throughout the ordeal. Only when the agony became too great would the second, the kaishakunin, finish him off.

Darker customs existed: the ritual of kirisute/kiritsuke gomen, or “killing and apologizing”. If a samurai felt that he was not given proper respect by someone of lower status, he could kill them on the spot. He was expected to explain the reason why or to have eyewitnesses, and it had to be very justified (for the time).

If not, the samurai could be ordered to commit seppuku. Not only is indiscriminate killing morally reprehensible in modern eyes, but it also clearly violated the virtue of Jin, as discussed above. More pragmatically, killing people responsible for working the land would be ill-advised.

Another such practice, tsujigiri (lit. crossroads killing), involved (possibly) testing the edge of their sword on a passerby, usually at night. This was not usually a condoned practice, but many samurai committed it anyway. Samurai would also engage in duels to demonstrate the superiority of their sword techniques, which is where the term tsujigiri originates from.

The nadir of bushido as a moral system was in World War II. By that point, it was twisted into a belief in Japanese superiority, absolute subservience to the will of the Emperor, the idea of no retreat on the battlefield, and utter contempt for those who surrendered and became prisoners.

The treatment of Chinese civilians — for example during the Nanjing Massacre — is something that modern Japanese officials and educators have not widely acknowledged.

Bushido as a moral code has a complicated and misunderstood history, as we’ve discussed. Edo-period and modern writings portray it as something universally followed, but everyone had personal interpretations and degrees of devoutness.