HomeCollectingIron Sand to Honed Steel: How to Make a Real Katana Samurai Sword

Iron Sand to Honed Steel: How to Make a Real Katana Samurai Sword

The Katana is almost mythical because of Japanese swordsmiths' legendary dedication to their craft. This is the process by which poor-quality iron sand is honed into deadly steel. 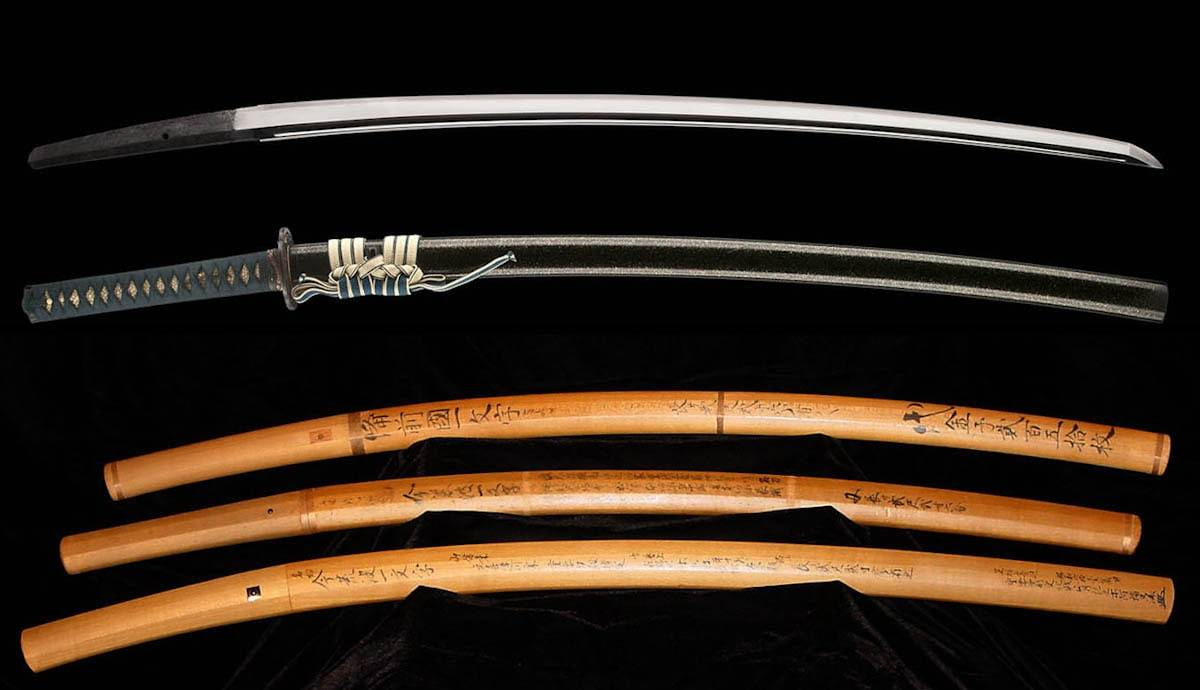 We all know how intensely popular the katana is among swords. Virtually every TV show, video game, anime, manga, or comic that features a sword-wielding character depicts the iconic Japanese blade. Due to these many fictional influences, it’s no surprise that many people have begun to collect them.

The influx of family heirloom swords from Japanese officers (many of whom were descended from samurai families) brought back as war trophies to the United States after World War II, has also contributed to the interest in these weapons. However, this rise in demand has led to a surge in mass-produced low-quality swords.

This is the process of how a real katana is forged.

Tamahagane (literally “jewel steel”) is the ore from which a real katana is created. The full process of smelting tamahagane from satetsu (black iron sand) is beyond the scope of this article, but it involves heating a mixture of satetsu and matsuzuri (pine charcoal) to create a bloom of steel. Most of what’s created at this stage will not be useful for making a sword, but it can go toward other tools. Display pieces, on the other hand, are often made out of 440 stainless steel, a brittle material that doesn’t hold up to stress testing when drawn out to sword lengths.

When the swordsmith receives the tamahagane, they begin breaking the ore into pieces to sort them into softer and harder steels. Individual pieces are heated and hammered into thin wafers, about a quarter of an inch thick. The swordsmith learns to distinguish by color and shear what each piece of tamahagane will become. This is far from an exact science; ancient smiths relied so much on the steel’s color, work was often done in darkness. The softer pieces are characterized by a rounded-off shear. Harder pieces are characterized by cleaner edges. In truth, the tamahagane pieces can be grouped into five separate classifications.

The most common layout for sword composition consists of two types of steel. The shingane (inner layer) forms the spine of the blade; it allows the metal to flex and absorb tension, which is important when parrying an oncoming sword. The kawagane (outer layer) is harder and will maintain a keen edge for hundreds of years with proper maintenance. Because we are only focusing on the basic type of real katana design, we won’t go in-depth into the techniques used by famous swordsmiths such as Goro Masamune, who allegedly created swords with seven different grades of tamahagane.

Once the block has been assembled by putting the pieces of ore together, it is wrapped in wet rice paper and sprinkled with straw. The paper and the straw do two different things: they help to decrease the loss of carbon through oxidation and they hold the block together so it can be forged.

The block of steel is heated not quite to its melting point; you don’t ever want to fully melt steel you intend to forge into a sword because it compromises the metal’s molecular structure. That’s right — all of those scenes you’ve seen in movies where a smith pours a container of molten metal into a mold and allows it to cool are wrong. Once the metal has been heated to a sufficient level the smith removes it from the forge and begins hammering it flat. When it has thinned enough, they make a cut into the bar.

The next step involves folding the metal over itself using a technique called mizu-uchi (water striking). The main purpose of folding and hammering the steel is to force all of the impurities and voids out of the metal. The force of the hammer blow, along with the thermal shock of the cool water, draws the impurities toward the surface.

The folding process of a real katana occurs up to 20 times, each time the billet is cut along a different axis. If you know your powers of two, you’ll know that folding something in half 20 times will give it an obscene number of layers. Beyond this point, any benefit from folding the steel diminishes. This is where we should address a popular myth; many proponents of the katana believe that folding the steel is a method that heightens the sword’s qualities to nearly mythical levels. While a great deal of religious significance is attached to its creation, folding the steel simply turns what was originally poor-quality iron into something that can equal other swords.

Once the block has been folded and the smith is satisfied that it is of a pure enough composition, the kawagane (outer layer) gets hammered into a trough-like shape. It is then set aside. At this point, the shingane (inner layer) is made using the lower-carbon steel that will become the core of the sword. After both parts of the steel block that will become the finished real katana have been made, it’s time to put them together. The shingane fits neatly into the kawagane and the assembly is hammered together. Now the block can be drawn out to sword length. The smith begins to create the basic geometry of the blade.

At the nakago (tang) end of the blade, the munemachi (rear notch) and the hamachi (edge notch) are cut out, and either one or two holes are drilled in the nakago for the mekugi (bamboo retaining peg). For longer blades like the tachi it was usually two holes. The nakago is left slightly thicker than the rest of the sword and given a rough texture so it can fit snuggly into the tsuka (hilt). The mekugi serves as an extra safety precaution so that the blade and hilt stay attached.

The sword has no curve during this part of the process. The curve is only a side effect of how the sword is hardened and heat-treated — but it lent itself well to the fighting methods of the samurai. A curved blade is easier to use on horseback and it excels at in-close draw cuts. One branch of kenjutsu (Japanese swordsmanship) called battoujutsu focuses on attacking directly from the draw. Prior to around 800 CE, the Japanese sword was straight and more like the Chinese jian. These are called chokuto.

Next, the smith creates a clay slurry and applies it to the blade evenly, painting it into the desired pattern known as the hamon (temper line). Then he inserts the sword into the fire for heat treating. The clay acts as an insulator; only the edge gets exposed to the maximum amount of heat. This is another distinguishing aspect: authentic hamon appear cloudy, whereas the pattern on modern reproduction katana blades is acid-etched. After heating it to about 1650 degrees Fahrenheit, the smith quenches the blade by lowering it edge-down into the water. The temperature difference between the ha (the cutting edge) and the mune (back edge) causes the mune to contract more, giving a real katana its distinctive curve.

Three types of sori (curves) can be seen on Japanese swords. The first is koshi-zori (literally the “waist curve”), seen on jokoto (ancient swords, before 900 CE) and koto (old swords, 900-1596 CE), where the deepest portion of the curve is closer to the nakago. The second, seen on shinto (new swords, 1596-1787 CE) is called the naka-zori (middle curve) or tori-zori. Here, the sword appears to curve evenly throughout. The third, seen on shin-shinto blades (newer swords, 1787-1876 CE) is the saki-zori (tip curve). You also see it on many modern reproduction blades.

Optionally, the smith may also use a special chisel to add a bo-hi (groove). This is not intended to allow blood to flow more easily from a wound as is commonly thought. Rather, the bo-hi reduces the weight of the blade without weakening it. It also lets the sword produce tachikaze (a sword wind) when cutting. The distinctive whooshing sound informs the wielder that the edge alignment is correct. Another step in the traditional process of making a real katana is for the smith to add their mei (signature). This inscription contains the smith’s name, the date the sword was forged, and sometimes the name of the samurai  who owned it.

The smith’s work, at this point, is finished. The sword then goes to a polisher whose responsibility it is to define the geometry and edge of the blade. The image above is of katana blades being kept in plain shirasaya for storage during transport.

The polisher starts the shitaji-togi (rough polish) with a coarse stone called a uchigumori. He rubs the sword against it, shaping the blade and getting rid of any scratches or marks from forging. He then washes the sword off, moving to a finer grade of stone to start the shiage-togi (fine polish). The stones in this stage of polishing are attached to paper and rubbed at precise angles to emphasize the sword’s bevel as well as removing any marks from the previous step of polishing.

The nakago is not polished, nor should it ever be cleaned because doing so decreases the ability of the hilt to hold the blade in place with friction. To polish the edge and the hi (groove) if there is one, the polisher uses uchiko, a type of powder used to clean a real katana. The finished blade then goes back to the smith, who inspects and corrects any errors. The sword can then receive its koshirae (furniture), which is made by a range of different craftspeople.

One aspect of the katana that sets it apart from other swords is its modular construction. The blade is the true heart of the sword. The other parts, the Koshirae like the tsuka/tsuba (handguard), or saya (scabbard) can be replaced as needed. The creation process of a real katana can take almost three months for a single sword. Even with weaker steel, the swordsmiths of ancient Japan were able to use this forging process to create a weapon worth its reputation.

5 Simple Ways To Start Your Own Collection

Here Are 7 Inventive Weapons Of The Ancient World