The Pursuit of Pleasure: How the Floating World Defined Edo Japan

Ukiyo—meaning “floating world”—encapsulates the flourishing pleasure-seeking culture in Edo Japan (1603 – 1867). How did the “floating world” come to define Japan from the 17th to the 19th century? 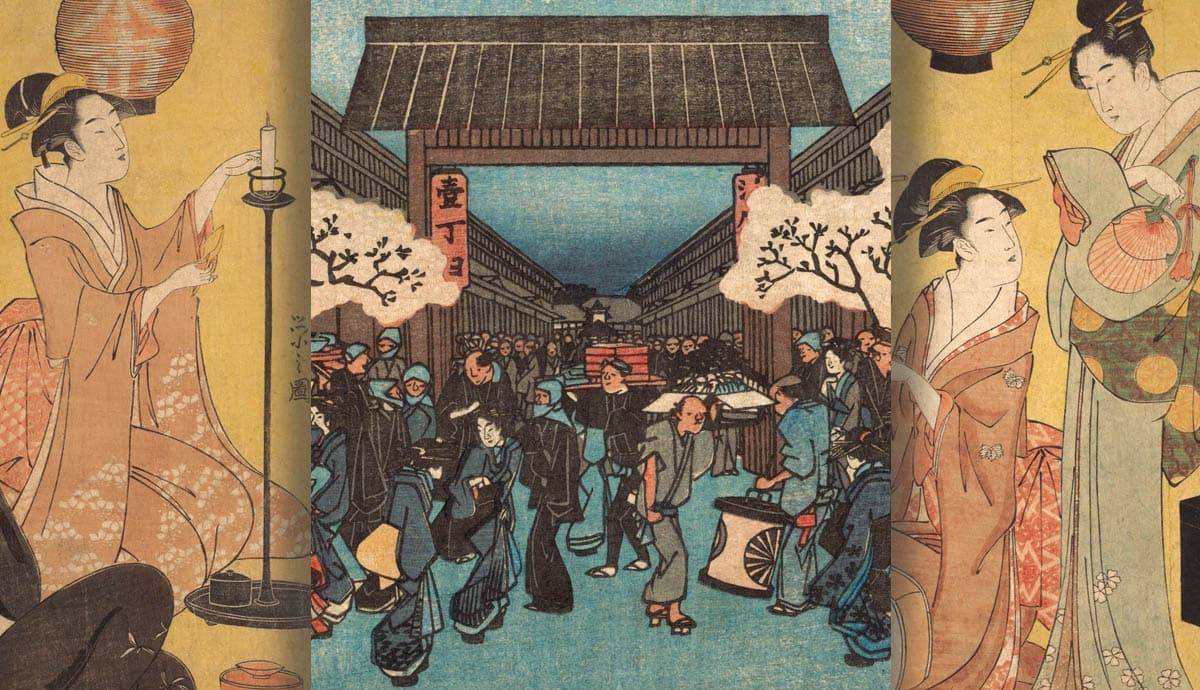 Under the rule of the Tokugawa Shogunate, a powerful medieval military government, Edo Japan was characterized by isolationism, relative peace, and a strict social structure. After over two centuries of perpetual internal strife, the Tokugawa rule was determined to establish a stable political order. At the apex of its new social hierarchy were the shōgun (commander-in-chief), the emperor with ceremonial powers, and the daimyō (feudal lords). Beneath them were the samurais, followed by the peasants and artisans, and finally, the merchants. For effective social control, the shōgun created licensed pleasure quarters within the confines of the Yoshiwara district. It was here where the floating world came to full flower with its vitality, hedonism, and a newfound appreciation for the aesthetic.

Fleeting Pleasure in Edo Japan: Whatever Floats Your Aesthetic Boat

“Because they fall we love them – the cherry blossoms.

In this floating world, does anything endure?”

Such is the epitome of Ukiyo in Edo Period Japan – the beauty of impermanence, the thrill of transience, and the meaningless existence of the individual. Ukiyo has been synonymous with pleasure-seeking and merry-making, but the origins of the word could not be further away from these common associations. Derived from Buddhist beliefs, Ukiyo 憂世 meant “a world of sorrow” – referencing the earthly sufferings from which Buddhists sought release. It later became an ironic homophone when written as Ukiyo 浮世meaning “the floating world”, which alluded to the pointless pursuit of pleasure in the red-light districts during the Edo Period.

On closer examination, part of this frivolous culture could be attributed to the policies enforced by the Tokugawa Shogunate. Extended periods of peace meant that the bored samurai class technically had nothing to do. Without having to fear living in a volatile society rife with civil war, the population could also enjoy mass culture for the first time. For the merchant class especially, the strict social hierarchy prompted them to find an outlet to release pent-up frustrations and be treated as equals. On top of indulging in pleasurable entertainment activities, Ukiyo too promoted a heightened appreciation for aesthetics. From flourishing art to beautiful figures and captivating sceneries, the floating world was a romantic—and sometimes romanticized—notion integral to Japanese sensibilities of the time.

Green-lighted by the Government: The Flourishing Red-Light District of Yoshiwara

To better regulate social behaviors, the Tokugawa Shogunate carved out specific areas for pleasure-related activities. As with Shimabara in Kyoto and Shinmachi in Osaka, Tokyo had its infamous Yoshiwara. Established in 1617, the original Yoshiwara district was located at present-day Nihonbashi (in Chūō ward, Tokyo). Within the walls of the red-light district, one could indulge endlessly without judgment in pleasurable activities in brothels, teahouses, theatres, and more. A city within a city, Yoshiwara was also where the shackles of social class were shaken off. Here the merchants and the samurais were treated equally – not based on their social prestige but solely based on their purchasing power. Having survived a disastrous fire in 1657, Yoshiwara was relocated to present-day Asakusa (in Taitō ward, Tokyo) where countless visitors of all social classes continued to find pleasure and solace in the floating world devoid of meaning.

In its heyday, it was said that Yoshiwara was home to over 4,000 sex workers. They ranged from the high-class courtesans trained in poetry and calligraphy to the moat-side sex workers who offered cheaper and quicker services. The rigid hierarchy characteristic of the flesh trade gave rise to a stark disparity in the standards of living. Despite the flourishing red-light district, a significant number of sex workers belonged to the lower end of the hierarchy.

According to a 1642 census, high-class courtesans in Yoshiwara numbered a mere 106, while close to 900 prostitutes made up the lower tier. Typically housed in upscale residences and decked out in the most luxurious kimonos, the former was widely sought after. They attracted a wealthy clientele and had the choice to say no to those whom they did not fancy. The latter, on the other hand, was constantly stuck in a vicious cycle of debt and harsh working conditions – all while battling the fear of unwanted pregnancies or contracting venereal diseases.

The Geisha in the Teahouse: The Charm of the Ochaya

By the turn of the 18th century, geishas—professional performers in traditional singing and dancing—started to gain popularity in Edo Japan. These women were highly trained to perform and engage their patrons in conversation on intellectual topics in ochaya (teahouses). More than just a venue, the ochaya provided the geisha a refined and safe environment to entertain her clients.

Traditionally, geishas were forbidden from selling their flesh, so as not to compete with the sex workers in Yoshiwara. As such, from pouring drinks and flirting to dancing and discussing current affairs, geishas did everything except sleep with their clients. This led some to believe that the appeal of the geishas rested with the fact that they were sexually unavailable. True to the ephemerality in the floating world, a man could never fully possess a geisha, no matter how many nights he spent in the teahouse.

Ukiyo as the Birthplace of Kabuki and Bunraku

With the thriving entertainment scene in Edo Japan, two popular art forms emerged for the leisurely consumption of the masses. They were Kabuki, a popular drama with stylized singing and dancing, and Bunraku which refers to traditional puppetry performances. Unlike their elitist cousin Noh—classical dance-drama—Kabuki and Bunraku welcomed audiences from all social classes and not just those of samurai or aristocratic lineage.

In Edo Japan, Kabuki plays touched on subjects like supernatural beings, courtesans, and mythical creatures. They often highlighted the Buddhist notion of a world of transitory nature – very much reflective of the floating world. Bunraku too shared similar themes and was performed with life-sized puppets paired with chanting and traditional string instruments. Both Kabuki and Bunraku theatres were open throughout the day for visitors to enjoy a good show while relaxing and sipping tea. These theatres were a microcosm of Edo Japan, where commoners indulged in their leisurely pursuits, at a place where social class did not matter.

As urban culture developed in Edo Japan, various genres of literature flourished with a growing readership and mass demand. In particular, a significant form of short poetry called haiku came to prominence during this period. Traditionally, Japanese haiku is made up of three phrases totaling 17 syllables which follow a 5-7-5 pattern. Usually making references to the beauty of nature or seasonal changes, haiku was considered as one of the earliest forms of popular culture in Japan. At the height of his fame in the 18th century and throughout his lifetime, established poet Matsuo Bashō was massively celebrated for his works. Regarded today as one of the greatest haiku poets, Bashō was credited for promoting haiku and elevating it to a respectable literary genre. The simplicity of haiku has also gone on to influence western writers like Ezra Pound who espoused the essence of haiku in the Imagist movement.

As with haiku, a prominent narrative genre emerged in tandem with the flowering floating world. Called Ukiyo-zōshi, which literally means “tales of the floating world”, this genre reflects the rich sights and sounds of the flourishing urban culture in Edo Japan. Written primarily in kana-based vernacular language, Ukiyo-zōshi literature was popular as it could be understood by the masses. It also touched on topics like eroticism, life in the pleasure quarters, and other subjects considered by some to be vulgar and lowbrow.

However, because of its realism and low barriers of entry, many works of this genre became national bestsellers with unparalleled readership. Japanese novelist Ihara Saikaku emerged as one of the most prominent contributors to the Ukiyo-zōshi genre. His works such as Life of an Amorous Man (1682) and Five Women Who Loved Love (1685) brought to life the inexhaustible variety and glamour characteristic of the floating world and remained iconic titles representative of Edo-era literature today.

Having peaked in the 18th century, the development of Ukiyo-e went in tandem with the blossoming pleasure-seeking culture in Edo Japan. From the earliest conceptualization by the painter to the advertisement of the finished woodblock print by the publisher, the Ukiyo-e warranted a complex production process which surprisingly did not translate to high prices. As such, what started out as simple monochrome prints became full-colored masterpieces that were widely enjoyed by the masses.

With the growing popularity of Ukiyo-e, artists who specialized in it also became household names contributing to the enduring cultural legacy of Edo Period Japan. Cementing the present-day international acclaim tied to Ukiyo-e, The Great Wave off Kanagawa by Katsushika Hokusai remains one of the most iconic Japanese artworks ever created. First published in 1830, it is a colored woodblock print that depicts a rogue wave appearing to overwhelm three boats in the Sagami Bay with Mount Fuji in the background. As Hokusai’s most acclaimed work, The Great Wave has profoundly influenced Japanese art and beyond since its creation. Some have even considered it to be at the forefront of Japonism and the impact of Japanese art on Western culture since the Meiji Restoration in 1868.

The End of Edo Japan: The Floating World’s Legacy

Although isolationism pretty much defined diplomacy in Edo Japan, it created the perfect circumstances for Japanese art to develop without the influence of foreign cultures. This resulted in the unique Japanese artistic vocabulary and sensibility known collectively as Nihonga which was the be-all and end-all for art during the isolationist Edo Period. However, this isolation was soon disrupted when Commodore Matthew Perry of the United States Navy forced his way into Japan with four warships in 1853. The use of gunboat diplomacy, in this case, was aligned with Perry’s primary goal of establishing trade relations, employing force if necessary, with Japan. Not only did this event lead to the fall of the Tokugawa rule, but it also paved the way for the Meiji Restoration and the opening up of the country.

Where art was concerned, Japan’s opening allowed the unique Nihonga style to sweep across foreign continents, much like how The Great Wave did off the coast of Kanagawa. For the first time in modern history, foreigners could enter Japan and be treated to a floating world filled with aesthetic creations in the likes of Ukiyo-e, Kabuki, Bunraku, and haiku among others.

The greater wave of Japonism would soon influence a whole generation of French artists like Vincent van Gogh, Camille Pissarro, and most importantly, Claude Monet. A fervent collector of Japanese art, Monet’s works were profoundly influenced by Japanese artistic sensibilities. Elements of Ukiyo-e and Japanese motifs were often incorporated into the impressionist artist’s canvas. Arguably, one of his most famous works The Japanese Footbridge is in itself a love letter to Japanese culture he loved and a testament to Japonism. When we contemplate again if anything endures in the floating world, it is in the legacy of these timeless Nihonga and Nihonga-inspired works that we find the answer. 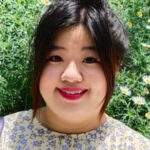