Rasputin was one of the major figures of the late Russian Empire, who made world headlines for his influence, extravagant ways, and love affairs. Here are 11 unbelievable facts. 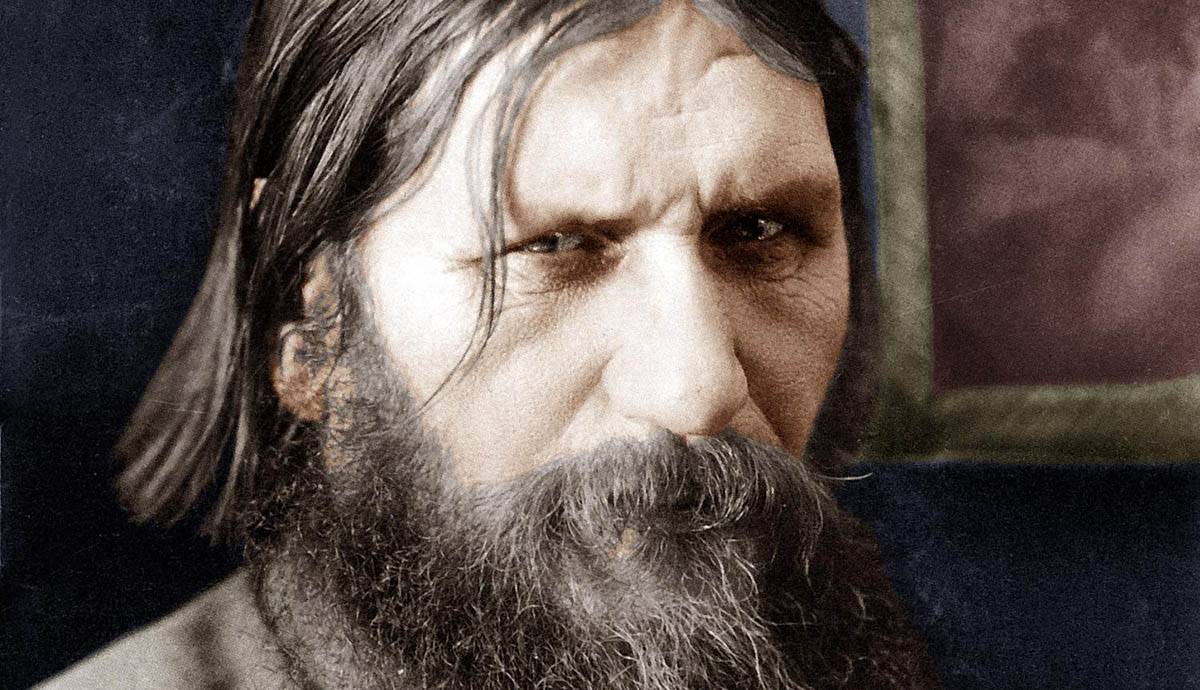 From peasant to trusted advisor and friend of Tsar Nicholas II and his wife Alexandra, Rasputin is one of the most intriguing figures in the late Russian Empire. A monk with a very special reading of Orthodox Christianity, self-declared healer, and quite the seducer, Gregory Rasputin’s rise and fall inspired generations of writers, filmmakers, and even singers.

While his name is famous worldwide, his story is still a mystery. Here is a list of some of the most unbelievable facts about Gregory Rasputin, which we gathered from various sources and testimonies on his life.

1. Rasputin Was the Only Child of His Parents to Reach Adulthood

Not much is known about Rasputin’s early years. As far as historians are concerned, his years before his religious “conversion” are a mystery. But researchers managed to gather some information to give insight into his childhood and youth.

It is said that Gregory Rasputin was born to a family of 7 children. However, none of his brothers and sisters reached adulthood. Being born in the peasantry, in a small Siberian village named Pokrovskoye, living conditions were not easy. It was common for most families to procreate as much as possible to ensure that at least one child could reach adulthood. In Rasputin’s case, it was exactly what happened…

2. He Started Out as a Peasant, Married and Had Children

As mentioned above, Rasputin was born in Pokrovskoye, a small Siberian village, to a peasant family. As a matter of fact, the future monk remained a peasant for the largest part of his life. It wasn’t until the late 1890’s that he integrated into the Orthodox Church. Until then, Rasputin is said to have lived a peaceful peasant life with his wife and children. Yes! Rasputin married, had children, and lived quite a peaceful peasant life… before a religious experience in 1897 turned his world upside down.

3. He Probably Joined an Illegal Sect in the Russian Orthodox Church

Rasputin went on a pilgrimage in 1897. He visited various towns and churches and discovered the Khlyst sect. One of the many beliefs of the Khlysts was that it was only by committing sins and repenting that one could get close to God.

Rasputin’s religious awakening is often linked to him joining the Khlysti. However, no evidence was found to support this claim, despite the fact that his lifestyle following the religious awakening is close to that of the Khlysts, who are known for enthusiastically indulging in sins such as drinking and fornication. Additionally, following his “awakening,” Rasputin traveled all around the Russian Empire, declaring himself a “Holy Man” with supernatural abilities such as healing.

4. He Actually Had No Healing Abilities But Was Probably Familiar With Hypnosis

Shortly after the revolution of 1905, Rasputin was introduced to the Royal Household. Over the years, he got closer to the Romanovs, and in 1907, helped stabilize the condition of the sick young heir Alexei. This event would gain him the favors of Nicholas II, and more particularly, of his wife, Alexandra.

It is improbable, however, that the monk had any of his self-declared abilities. As a matter of fact, even the inner circle of the Royal Household disbelieved this. While he indeed helped young Alexei, it is most probably due to hypnosis skills that he developed during his “religious awakening.” Hypnosis was very common among Orthodox priests. Rasputin often used his abilities, especially to impress ladies of the Russian nobility…

According to most of his contemporaries, Rasputin’s manners were unfit for Russian nobility. Like most peasants, his lifestyle prior to his introduction to the Royal Household was simple. The use of spoons, forks, and knives had yet to be generalized among the peasantry, and thus, the monk struggled to adapt to his new entourage.

However, by all accounts, his bad manners were excessive even for the peasantry. It is said that he used to lick spoons before serving others and often had portions of food in his beard. In addition, Rasputin rarely washed and often smelled bad.

6. Rasputin Called Himself “Christ In Miniature”

Following his religious reconversion in 1897, Rasputin traveled around the country, supposedly healing people with his “unnatural” powers. He progressively developed a reputation as a mystic and declared himself a “holy man.” He embraced this reputation so strongly that he would go so far as to present himself as such to the Romanovs and many other nobles. He claimed to be sent by God to save the Russian Empire, knew the time of his death, and said to the French Ambassador that “despite his terrible sins, he is Christ in Miniature.”

Those words would have usually passed for the rambling of a madman if it wasn’t for the fact that a significant part of the Russian nobility believed him and followed his words, including Tsarina Alexandra.

Despite his self-declared holiness, Rasputin indulged in several activities considered sinful. The “Mad Monk,” as he was called by many, was a heavy drinker. It is said that he rarely sobered up, and when he did, it was only to spend time with various ladies of the court.

In fact, despite his severe lack of hygiene, Rasputin managed to gain the favors of a lot of noblewomen. It is even said that he had an affair with the Empress Alexandra Feodorovna. While this is still up to debate, it is certain that Rasputin’s influence on the Tsarina was so great that she blindly implemented his advice when her husband left her in charge of the country in 1916 following his departure to the front.

As if his influence was not enough, his popularity among the ladies of Saint Petersburg gained him more enemies in the upper class. The latter’s resentment only grew with time and reached a breaking point on the eve of the First World War in 1914.

8. The Mad Monk Had A Major Influence On Russia’s Involvement In World War I

Rasputin opposed Russia’s entry into World War I. He claimed that the conflict would be disastrous for the country and have cataclysmic consequences for the monarchy. As his advice was not heeded, Rasputin insisted on going to the front to bless Russian troops. This was refused to him as the army’s  Commander-in-Chief, Grand Duke Nicholas Nikolaevich, vowed to have him hanged if he got anywhere near the frontlines.

However, Rasputin correctly predicted the early disastrous defeats of the Russian Empire. This pushed Tsar Nicholas II to heed his advice to take command of the army, thus abandoning Saint Petersburg to his wife, who was under the monk’s influence.

The Emperor’s leadership in battle did not impact the growing stalemate with the Central Powers and further lowered his popularity. In the end, Rasputin’s prediction of the cataclysmic effects of the war on the Russian Empire and the Royal family did indeed come true.

9. The Mad Monk Predicted His Own Death

The correspondence of Rasputin and Tsar Nicholas II after the monarch’s departure to the frontlines indicates that the monk had quite an interest in his own death. In a letter from December 1916, Rasputin wrote: “I feel that I shall leave life before January 1st… If it was your relations who have wrought my death, then none of your children will remain alive for more than two years.”

It would indeed be the Tsar’s relations that ended the life of Rasputin. Growing weary of his lasting influence, some of the most prominent noblemen of Petrograd (Saint Petersburg’s name during World War I) plotted his assassination in December 1916, two months before the start of the February Revolution that would end Romanov rule. As history unfolded, his prediction that the Tsar’s children would die two years after his death came true…

10. Rasputin Was the Target of an Assassination Attempt In 1914

Due to his influence, the many enemies of the Mad Monk were not only members of the Russian nobility. A large number of priests of the Orthodox Church severely condemned the self-declared “Christ in miniature.” Among them was Sergei Trufanov, also known as Hieromonk Iliodor.

The latter was one of the followers of Georgy Gapon, a leading figure in the 1905 Revolution, and severely condemned the shortcomings of the late Romanov rule. He was also an enemy to Rasputin, holding him accountable for the misbehaviors of the royal couple and resenting his dramatic influence on the family.

On the 12th of July 1914, a peasant woman named Chionya Guseva, a supporter of Iliodor, approached Rasputin on the streets and stabbed him in the stomach. The Mad Monk managed to run away and survived the wound. The would-be assassin was later found insane and isolated in an asylum in Tomsk. Iliodor fled to Norway right after learning of the failed attempt.

11. Rasputin’s Resistance to His Assassins Was Remarkable

Prince Felix Yusupov, nobleman and significant opponent to the Mad Monk, lured Rasputin to his palace on the 29th of December 1916. With co-conspirators Grand Duke Dimitri Pavlovich and Deputy Vladimir Purishkevich, Prince Yusupov fed the monk some cyanide-laced cakes and drinks. But despite the high quantity of consumed poison, Rasputin did not die and continued indulging himself in the various offered commodities.

Exacerbated, Yusupov and his allies shot the monk several times. But even then, Rasputin survived. However, the Mad Monk found himself incapacitated by the several wounds he received, and was thrown in the Malaya Nevska River. The water found in his lungs suggests that Grigory Rasputin died by drowning, at the age of 47.

A few months later, the Tsar abdicated, and the Russian Empire was no more.