HomeStoriesThe Romanovs: The Rise and Fall of a Russian Dynasty

The Romanovs were a famous Russian dynasty that ruled the country for three centuries; during this time Russia became a major world power. 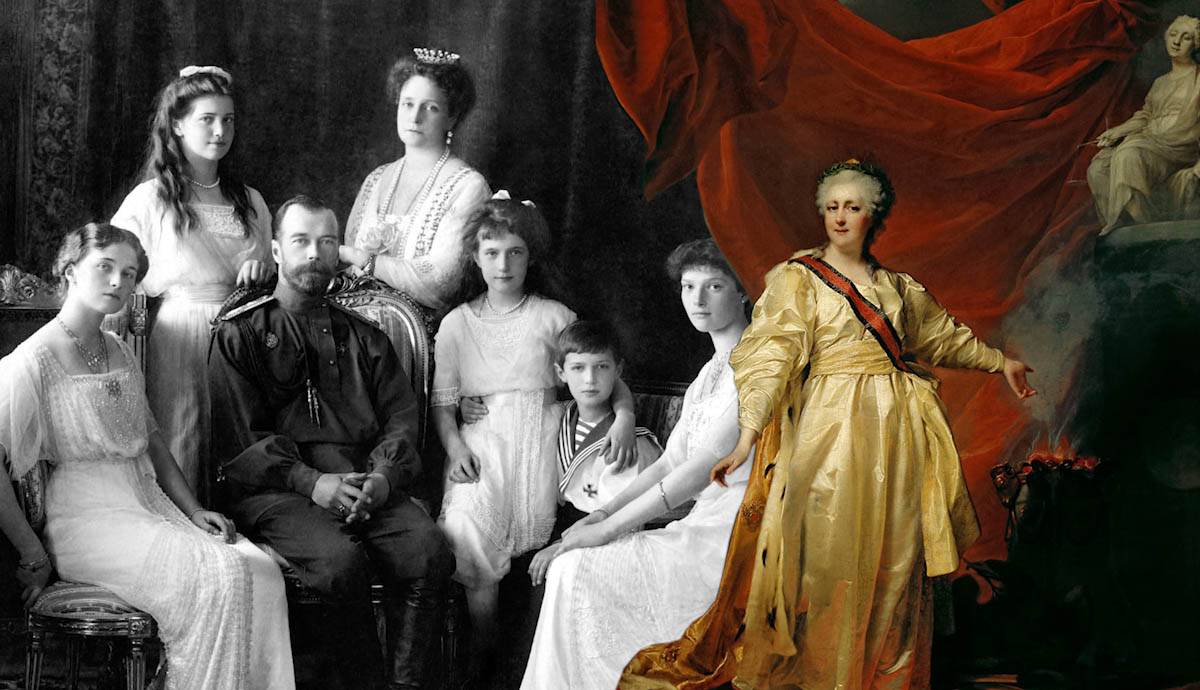 Russia’s imperial aspirations began when she resisted the violence and oppression of the Tatars (1480), and united her divided principalities (1523), stopping the penetration of the Turks, and creating a world empire. With Ivan IV the Terrible (1533–1584), her fame and power grew. Ivan captured Kazan and Astrakhan and subjugated parts of Siberia. He also organized a standing army, a personal guard, and centralized the state administration. Thus began the process of modernization of the state and Russian feudal society. Soon, with the rise of the Romanovs, her imperial ambitions would grow further, and the Russian Empire would begin to expand.

Ascension of the New Dynasty

After they drove out the Poles, the Russian National Council met in Moscow in 1613. The participants of this parliament were representatives of all social classes, and together they elected Mikhail Fyodorovich Romanov (1613–1645) as Tsar of Russia. With him began the rule of the Romanov dynasty, which lasted for three centuries (until 1917).

Mikhail ended the war with the Poles and occupied the Turkish fortress of Azov. Additionally, he conducted a census and reformed the state administration. In this process, he had the support of Metropolitan Filaret. One of the most important political bodies was the Council, an assembly of the nobility, clergy, and merchants. At this time the Russian Empire became more like Western countries in terms of organization.

Russia rapidly enlarged its territory, but in comparison to Western countries, it would remain a backward country. To become a great power, it needed to reach the Baltic and the Black Sea since it had only one port in the north — Arkhangelsk.

During the reign of Peter I Romanov (1682–1725), Russia became an absolutist monarchy of the western type. As a young man, Peter visited Western Europe and became acquainted with its social, technical, and military achievements. He created a standing army on the European model, opened mines and factories, and regulated the tax system. The Russian Empire was also divided into provinces. Peter opened schools for navigation, technology, and medicine, founded the Academy of Sciences, and forbade men from wearing long beards and women from covering their faces.

During his reign, Russia fought with its main enemies — Poland, Sweden, and Turkey. He captured Azov on the Don, fought the Great Northern War with Sweden (1700–1721), and took a decisive victory over the Swedes near Poltava. The Russian Empire expanded significantly in the Baltic, and the result was the construction of a new city, Petrograd (Saint Petersburg), the new capital of Russia. Although defeated on the Pruth (1711) by the Ottomans, Russia retained the territories it had conquered.

Peter I also successfully fought against Persia and expanded the country in the area of ​​the Caspian Sea. Russia became a modern feudal empire during the reign of Peter I, who was named the “Great”.

The Rise of Catherine the Great

After Peter’s death, several incompetent governments were in charge of the Russian throne. It was not until the middle of the century that Peter’s daughter Elizabeth (1741–1762) stabilized the dynasty of the Romanovs. Although war did not stop during her reign, she is best known for the splendor, parties, and luxuries she introduced at court.

With the arrival of Catherine II (1762–1796), the Russian Empire once again successfully fought wars and conquered new territories. It also suppressed a great uprising of the peasants, led by Pugachev. While Peter the Great had spread Russia toward the Baltic, Catherine moved toward the Black Sea. Thus, Russia had finally become a great power, which would continue its conquests in Europe and Asia, primarily in Siberia. The Romanovs were now one of the most important dynasties in Europe.

In the war against the Ottoman Empire (1768–1774), Russia conquered Crimea and the northern coast of the Black Sea. The Russian army penetrated the Danube to Bulgaria. With the Kuchuk Kainarji treaty (1774), Russia gained the right to pass through the Bosporus and the Dardanelles and the right to protect Christians in the Ottoman Empire. The Russian Empire also made considerable gains by dividing up Poland.

Catherine was succeeded by her son Paul. After coming to power in 1796, with the intention of stopping the spread of ideas from the French Revolution, he introduced Russia to the Second Coalition with England and Austria against France. Disappointed with the passivity of England, Paul reconciled in 1800 with the First Consul of France, Napoleon Bonaparte, and severed diplomatic relations with London. His officers subsequently turned against him, organizing a conspiracy in 1801 that killed him. Paul was succeeded by his son Alexander.

By 1812, Napoleon had decided to attack Russia, at the head of his Grande Armée of about 700,000 soldiers. The future soon looked very unpleasant for the French. Russians led by Commander Kutuzov burned Moscow, leaving Napoleon’s army homeless in the coming terrible Russian winter. Napoleon began to retreat, but it was too late. The cold started to take its toll. Out of 700,000 soldiers who marched on Russia, less than 100,000 returned, fleeing in crowds, totally defeated.

By 1850, the Russian Empire had gained a reputation as the most conservative European power. The dynasty of the Romanovs retained a completely autocratic role and the Russian feudal system continued to bind the serfs to the land and their feudal lords. In the west, the Russian army was once regarded as practically invincible. However, after the Crimean War, this all changed.

Even before the Crimean collapse, peasant uprisings and workers’ uprisings flooded Russia. In all of Europe, only Russia retained serfdom, which tied millions of peasants to the land, so it is no wonder that between 1825 and 1855, more than 500 peasant uprisings broke out throughout the country.

Hunger, caused by food shortages, affected the peasants very often, and Russian aristocrats did not in any way assume responsibility for the living conditions of their serfs, which is why they had to fear more and more peasant revolts. It is not surprising that serfs, mobilized into Russian military units, show very little enthusiasm for warfare. The once-powerful Russian army lost its aura of invincibility, causing panic in the upper strata of Russian society.

Tsar Alexander II (1855 – 1881) was determined to carry out reforms that would strengthen and modernize the country. He freed 22 million serfs in 1861, and a few years later 25 million serfs on state-owned estates. The emancipation of the serfs, however, did not make them completely free. They gained the most infertile land and were obliged to pay rent for their land and freedom.

Alexander’s other reforms concerned the legal system, which became much more independent. He encouraged the development of education by opening thousands of new schools and he reduced military service.

Despite the reforms he carried out, Alexander II failed to turn Russia into a modern monarchy. Dissatisfaction continued to prevail. After a first assassination attempt in 1866, Alexander became increasingly stubborn and authoritarian, turning Russia into a police state. Trouble would continue to roll on until he ended up as the victim of a successful assassination in 1881.

The conflict that would turn events in Russia was the shameful defeat of the Russian army in the Russo-Japanese war of 1904/5. It would increase the already great dissatisfaction of the people. On Sunday, January 22, 1905, thousands of workers and other protesters gathered in St. Petersburg. They demanded changes and improvements in their living conditions. Dissatisfied workers intended to hand over a petition to Emperor Nicholas II Romanov and they set out to hand it to him at the Winter Palace, the emperor’s residence. The angry mass was stopped by the only possible means at the time, the rifles of the soldiers, resulting in the deaths of hundreds, or possibly thousands of protesters. That day was called “Bloody Sunday.”

A general strike was declared, and revolutionary demonstrations, rallies, and armed clashes with the police began. Barricades were erected in the streets of larger cities. Thousands of people died, and many more were imprisoned, sent into exile, or forced labor. The uprising was suppressed because it wasn’t well organized.

The revolution, however, brought some changes. Russia became a constitutional monarchy, and the Duma for the whole of Russia was established. Real power was still in the hands of Nicholas II, but a storm was brewing prior to the revolutions of 1917. No one would guess he would be the last ruler from the family of Romanovs.

The Romanovs: The End of a Dynasty

Russia suffered terrible losses during World War One. In August 1915, a desperate Nicholas II made a cardinal mistake — he left the capital and personally took command of the army. This made him personally responsible for all the military defeats and suffering of the soldiers. People were also outraged at his wife Alexandra, who fell under the influence of Grigori Rasputin, a Siberian mystic.

At the beginning of 1917 hungry women, who represented more than half of the workforce in St. Petersburg, expressed their dissatisfaction. On March 8, 1917, around 10,000 women went to the streets of St. Petersburg, demanding better working and living conditions, cheaper food, and an end to the rule of the Romanovs. Other residents soon joined the demonstrations. The Russian army slowly refused to obey orders and instead of opposing the protesters, some soldiers joined them. Members of the Russian Duma organized the Provisional Government, and Tsar Nicholas II abdicated.

Several of the Romanovs were killed in Yekaterinburg on July 17, 1918. After his abdication, Emperor Nicholas and his family were under house arrest near St. Petersburg. The decision was made to liquidate the whole family, the family doctor, the three servants, and even the family dog. Thus, the reign of the Romanovs finally ended.

The Great Westernizer: How Peter the Great Earned His Name