HomeStoriesIvan the Terrible: Was He Really Terrible?

What was so terrible about Ivan the Terrible, Russia's awe-inspiring ruler? And for being so terrible, how come this Muscovite ruler’s title and state expanded? 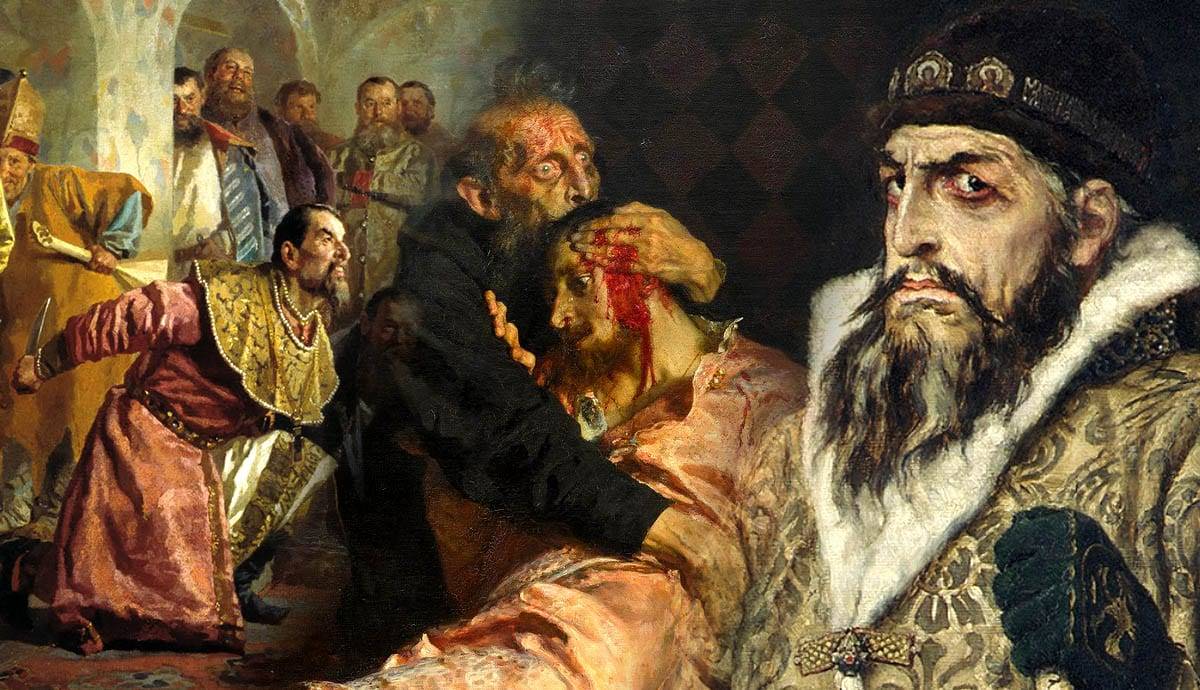 If it isn’t already obvious, Ivan the Terrible is often depicted in art, created a long time after his tenure as Tsar, as a scouring, awful, cruel ruler. His name in English is, in fact, a rough translation of the Russian word grozny, which implies “terrible” but in the sense of “awe-inspiring” or “terrifying” rather than the way we know it: bad. It is clear then that Ivan’s name comes from a more Machiavellian reputation, one that inspired fear yet was still out for the best for his people. Still, Ivan did also commit certain actions considered “terrible” in the English sense. Thus, was he a bad human being, or was he awe-inspiring?

Born in 1530, Ivan was crowned Grand Prince of Moscow at the age of three. At the time, Ivan’s crown represented Russia’s predecessor state: the medieval Duchy of Muscovy. The young Prince descended from the Rurikid Dynasty, one of two royal dynasties, alongside the Romanovs to whom the Rurikids were related, that ruled imperial Russia. Scholars speculate that the Rurikids descended from Viking immigrants to Russia and Ukraine from the early medieval era. These Vikings formed the earliest political entity of the region known as Kievan Rus‘. Is it through Viking immigration to the region that white Europeans settled the area; the region’s natives had a more Siberian or Turkic look and culture.

Ivan lost his father when he was three, which was why he inherited the throne so young. His mother, then serving as regent, died when he was eight to a rumored poisoning. Powerful noble families had to step in to fill the political void. Varying spheres of nobles competed for control of the state, making a lasting impression on young Ivan, who was cast aside.

At the age of sixteen, in early 1547, Ivan the Terrible was crowned “Tsar of All the Russias,” the first of any Russian ruler to claim such a title. At the same time, he married Anastasia Romanova, a daughter of the powerful Romanov family who in 1613 would inherit the throne directly thanks to this match. Ironically, the Romanov Dynasty would also end with an Anastasia Romanova – the youngest daughter of Tsar Nicholas II – in 1918.

Though the title implied status on par with the western title of an Emperor, Russia’s rulers would only come to be known as Emperors after Peter the Great’s tenure (r. 1682-1725.)

From the moment he took the throne up through the 1550s, Ivan issued a series of sweeping reforms. Fanatically religious, Ivan the Terrible imported the printing press to Russia in order to print a series of religious texts. The Tsar also commissioned the construction of a number of churches throughout his state, including Saint Basil’s Cathedral in Moscow.

At the age of nineteen, Ivan issued a total law reform, creating a quasi-parliamentary law-making system called the Zemsky Sobor. The new system housed representatives from all three social classes of feudal Russia: nobility, clergy, and even commoner. Each community was allowed to elect a representative to participate in judicial affairs on their behalf. Rural communities were endowed with the right of self-governance, including their own tax distribution. Peasants were given the right to leave the land they worked after paying a fee and were no longer indentured. Does this sound so terrible?

Ivan the Terrible also created a standing Russian armed force known as the Streltsy; the Tsar was almost continuously at war through his reign. In Moscow, the unit became a praetorian guard of sorts to the Tsar and Kremlin but also acted as a quasi-police force and firefighting brigade for the city. The unit was disbanded by Peter the Great in 1689, a scene that included a spectacle of public execution and torture after failing to support Peter’s legitimacy to the throne.

Through the 1560s, Russia was ravaged by famine, under a blockade by the Swedish and Polish, and was exhausted from a series of unsuccessful conflicts with the Polish-Lithuanian Commonwealth. Anastasia Romanova – Ivan’s first wife, to whom he was extremely attached – died suddenly in 1560. The suspected cause of death was poisoning: the same cause of death of Ivan’s mother in his youth. These factors are said to have completely shattered Ivan, destroying his mental health. The rumor of poisoning made Ivan cripplingly paranoid of the nobility closest to the Tsar and Tsarina.

In 1564, Ivan the Terrible abdicated the throne, citing suspicion and treason of the nobility, and fled the country. Despite the political aid of the Zemsky Sobor, Ivan’s court was incapable of ruling in his absence. The Tsar agreed to return to Russia on the sole condition that he could rule with absolute autonomy, including the right to confiscate all assets of those he deemed a traitor, which included the nobility. Ivan’s word was law.

The primary target of this policy was the country’s noble class. At the very slightest suspicion, Ivan the Terrible reserved the right to publicly execute or torture anybody he deemed a traitor.  This paranoia and brutal punishment of his own people were paralleled by Joseph Stalin during his policy of the Purges when he controlled the Soviet Russian government through the 1930s. Almost overnight, Russia transformed into a police state.

When a plague epidemic hit the city of Novgorod, Ivan’s paranoia had reached a point where he thought it was a ploy by the nobility to overthrow his rule. He had his own city sacked and burned.

The political manifestation of Ivan’s paranoia reaped massive consequences. The exact number of victims of the Oprichnina is disputed, much like the victim count of Stalin’s Purges. The Oprichniki unit enjoyed many political, legal, and social privileges, all of which they heavily abused. The unit was at liberty to assault anybody they suspected of treason. This was one of the first recorded examples in human history of government surveillance of its populace. Many citizens fled Russia, which took a massive toll on its economy.

After the death of his first wife, with whom he had the majority of his children, Ivan the Terrible would marry seven more women. He fathered eight children, only three of which survived into adulthood. Of the eight women the Tsar would wed, three died (or were likely killed) while they were acting as Tsarina. Scholars speculate that powerful aristocratic families poisoned the series of wives in attempts to get their daughters to marry the neurotic Tsar in order to slip their family line into power.

The Downfall Of The Tsar

The most famous example of Ivan the Terrible’s madness comes from a story in late 1581.

That year, Ivan’s eldest son and heir, also named Ivan, was twenty-seven years old. His wife was pregnant. The family line and that of the throne were secure. For reasons unknown, Ivan the Terrible entered a state of blinding rage and beat his pregnant daughter-in-law, likely causing a miscarriage. Furious, Ivan’s son confronted the Tsar, and the two engaged in a heated confrontation. Ivan the Terrible struck his son on the temple with a staff, killing him instantly.

The masterful artwork in the above painting depicts a petrified Ivan the Terrible holding his son dying by his own hand. The painter, Ilya Repin, captured a moment of sheer terror, panic, remorse, and grief in the Tsar’s eyes. The painting is an outstanding piece of work; there are almost no words to describe the expression on the Tsar’s face.

The Legacy Of Ivan The Terrible

With the murder of his own son, Ivan the Terrible single-handedly ended the Rurikid dynasty, which had sat on the Russian/Muscovite throne since 882. Ivan was succeeded by his second-oldest son, Feodor I (r. 1584-1598.) Weak in body and mind, the heir never produced children. After the very shaky reign of the very feeble Feodor – who had his own set of issues having grown up without a mother and in the shadow of his paranoid murderous father – Russia entered what is known as the Time of Troubles, a nightmarish crisis of succession.

Ivan the Terrible died of a stroke at the age of fifty-three while playing chess. Though terrible, his legacy also helped legitimize Russia as a cultural and religious powerhouse. His foreign policy fixed the Russian gaze westward towards Europe rather than eastward towards Asia. This legacy would be furthered by Peter the Great.

Ivan’s early encouragement of the arts was manifested in himself: the man was an adept writer and musician. Had he not grown up in an environment that mentally crippled him so, would his reign have been one of lasting progressive reform and toleration?

Poison in Ancient History: 5 Illustrative Examples of its Toxic Use

“Without Art Mankind Could Not Exist”: Leo Tolstoy’s Essay What is Art