HomeStoriesHara-kiri: The Samurai Ritual of Seppuku

Hara-kiri: The Samurai Ritual of Seppuku

The gruesome ritual of hara-kiri appears in countless samurai media and historical accounts. Learn about the nuanced details behind this dark custom and how it affects Japanese society today. 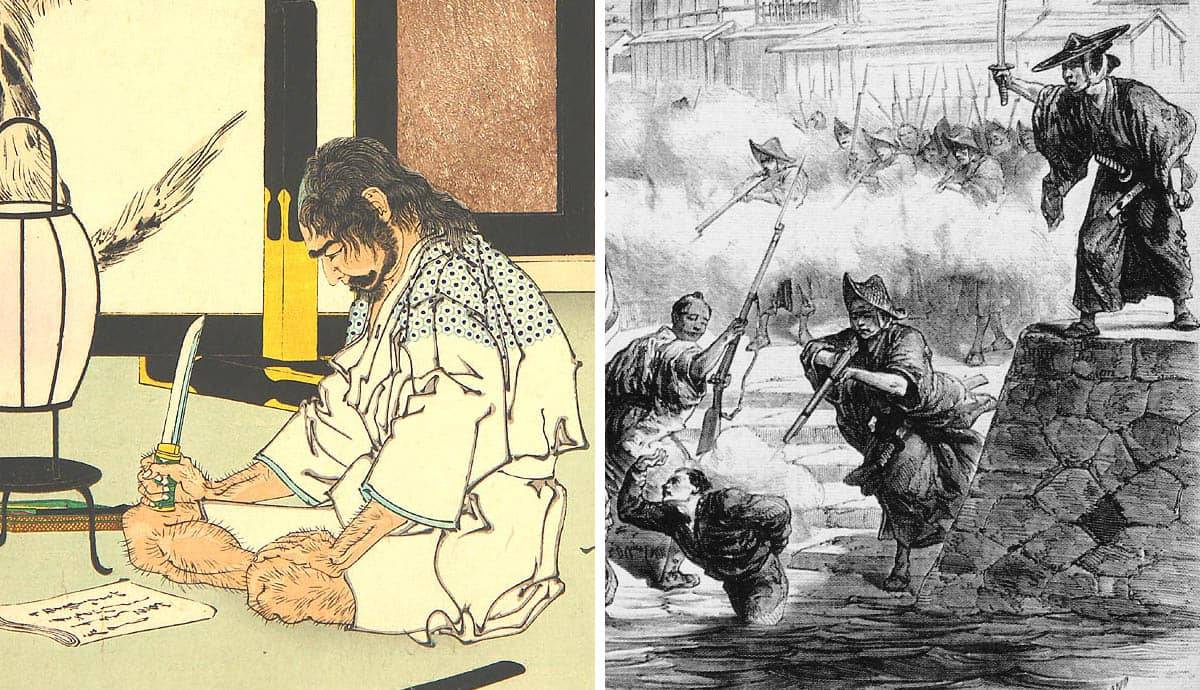 The samurai of Japan (in)famously believed that death was preferable to perceived dishonor. This belief manifested itself most acutely in the well-known practice of hara-kiri, or seppuku: formal suicide by self-disembowelment. The word literally translates to “belly cutting”. As one might imagine, this is an agonizing and horrific way to die. So why did samurai subject themselves to it? And how is it relevant today?

One misconception to clear up before we go: hara-kiri is not a ‘vulgar’ word for seppuku. The two words are written with the same kanji. The native Japanese reading is hara-kiri, used in spoken language. The classical Chinese reading is seppuku, used in formal written documents.

Another interpretation of the difference is that seppuku refers to the full ritual, whereas hara-kiri is the simplified act.

Harakiri and Seppuku: The Ritual

The practice of hara-kiri has many different details but a few elements are common to all versions of the ritual. The samurai intending to take his own life would have had a set time and date for the act so preparations could be made. A square of silk would be placed on the ground, upon which the samurai would kneel in seiza with a tanto placed before him. The tanto was a short dagger worn along with the katana and wakizashi.

The samurai would compose a death poem to be recorded for posterity. He would then open the lapels of his kimono to expose his stomach, grasp the tanto by the blade, and thrust it into his abdomen edge-up.

How the hara-kiri proceeded at this point depended on the fortitude of the samurai in question. He was to endure the agony for as long as possible without breaking composure. When the agony became intolerable, the kaishakunin, or second, would make a cut to the neck to almost decapitate the samurai who was intended to die. The “almost” part demonstrated the control of the cut and prevented the severed head from spilling blood on the ground. In Shinto belief, any part of the ground touched by blood or by a corpse was considered unclean.

If the decapitation did not occur after the first thrust, the samurai would pull the tanto across his abdomen and make a second, vertical cut up to the heart. Being requested as a kaishakunin was considered a serious responsibility. Failure to perform it properly was a mark of shame and could in some cases lead to the kaishakunin himself being ordered to commit seppuku.

Reasons Behind the Act

The most well-known reason (in fiction at any rate) for hara-kiri was as an atonement for a perceived shameful act. This isn’t to say that a samurai would kill himself for just any minor transgression. It would have to be for something that could not otherwise be rectified. He would also have to have explicit permission from a higher authority, such as a daimyo or the shogun. Committing seppuku without permission was seen as dishonorable and could, according to Buddhist belief, cause reincarnation to a lower status. The exception was if the samurai was on the battlefield facing enemy capture.

The other most well-known reason a samurai might go through with this act was as a form of capital punishment. A warrior who made a grievous error, lost a battle, or otherwise failed his daimyo, might be ordered to commit hara-kiri as atonement.

It is an extreme measure by any standard, but one thing to remember is that the Japanese were mostly Buddhist. The concepts of life and death were and are viewed differently than in many Western morality systems. Belief in reincarnation also factored into the acceptance of sudden death as just another part of life.

Finally, seppuku was used as a form of execution. The condemned would be kept under close guard by his captors and at the time of the ritual, he would be given a paper fan rather than a dagger. When he touched the fan, the kaishakunin would strike.

Women were also known to commit seppuku, but they did not do it in the same way that men did. The act was incorrectly called jigai (lit. suicide) via mistranslations from author Lafcadio Hearn. The woman would kneel, tie her legs together for modesty’s sake, and cut her own throat.

Even teenagers and children could be ordered to perform hara-kiri. They, especially in the case of children, were often told it was merely a rehearsal for the act, but they would be cut down just the same. Feudal Japanese culture operated according to a “sins of the father” mentality. An egregious enough breach of conduct could result in an entire family being executed.

Why Was It Done This Way?

We’ve gone over the reasons for someone committing hara-kiri, but what symbolism is behind the act? Why such a horrific method? One of the most prized virtues in Japanese society, and by extension bushido, was stoicism in the face of adversity and pain. By demonstrating resilience and composure, the samurai could regain lost honor in his last moments.

The abdomen was the target because the soul was believed to reside in the hara, or stomach.  Piercing the stomach was considered to be the quickest way to release the soul so it could be reincarnated into a new body. Also, the cutting of the abdomen was not itself the death blow. Although certainly fatal because of internal sepsis and blood loss, it would not be a quick death befitting a samurai.

The custom of hara-kiri originated during the Heian period. The first known instance was after the 1180 Battle of Uji, when Minamoto Yorimasa ended his life to escape torture at the hands of his enemies. Most samurai who were defeated, if they had not been killed outright, would go this route. Seppuku was in this case considered a mercy in the context of the battlefield, a chance for the samurai to die on their own terms should a battle not go in their favor.

Later on, the samurai caste became larger and more embroiled in government. Samurai were expected to act according to bushido outside the field of battle, and seppuku was then used more as a means of redeeming honor, should the samurai fail in his duty in peacetime.

While the Japanese saw hara-kiri as a test of honor and composure as well as a way to poetically redeem oneself, the West had an entirely different opinion. Japan’s interactions with the West were tightly controlled by the Tokugawa shogunate; out of a desire to keep the status quo.

On March 12, 1868, a ship of French sailors landed at Sakai, a port near Osaka in Tosa prefecture. While the sailors were on shore leave, they were abusive to the inhabitants of the town. One sailor took a banner from a Tosa samurai. A fight broke out between a small group of sailors and local samurai, leading to a diplomatic incident.

The Japanese were ordered to commit seppuku and the French captain under whom the sailors served was invited to watch the ritual to confirm it had been done satisfactorily. Sixteen of the warriors, along with the garrison commander, were to end their lives. The French captain saw the seppuku, and in his horror, he requested that it be stopped and the remaining samurai spared.

This incident, along with the general modernization of Japanese society, led to hara-kiri being outlawed as a means of punishment. There were some officers in Imperial Japan during World War II who killed themselves in traditional samurai fashion, for example, Takijiro Onishi, the admiral who devised the kamikaze tactic. Rather than a traditional death poem, he penned a letter of remorse for the 4,000 pilots who had died by deliberately crashing their crafts into enemy vessels. Onishi also didn’t appoint a kaishakunin and subsequently took 15 hours to die.

The other notable instance of seppuku in modern times was that of Yukio Mishima, a hardline nationalist who felt that the Japanese military and society had become weak since the end of World War II. In 1970, he forced his way into the headquarters of the Japanese Self-Defense Force and committed hara-kiri after a failed attempt to persuade them into a coup to restore the Emperor’s political power.

Hara-kiri and Suicide in Modern Japan

Japan sadly has one of the highest suicide rates in the world. Although people do not often commit seppuku in accordance with samurai ritual, there still exists an ingrained culture of shame targeting those who fail to meet family or community expectations. Failing to get into a good university or to find a job capable of supporting a family are two major sources of shame in Japanese culture. Elderly people in Japan who no longer feel capable of contributing to society have been known to end their lives rather than become a perceived burden to their loved ones.

Japanese society largely has a “grin and bear it” approach to mental health issues like depression or extreme stress. Seeing a therapist or even mentioning mental illness is considered taboo in Japan, though this attitude is thankfully fading with younger generations. The government of Japan has also been taking steps to curb the prevalence of suicide. For example, Aokigahara, the so-called “Suicide Forest,” has signs posted at each trailhead. These signs contain messages discouraging would-be suicides by listing contact information for mental health hotlines and asking them to consider the effect their deaths would have on family and friends.

Iron Sand to Honed Steel: How to Make a Real Katana Samurai Sword