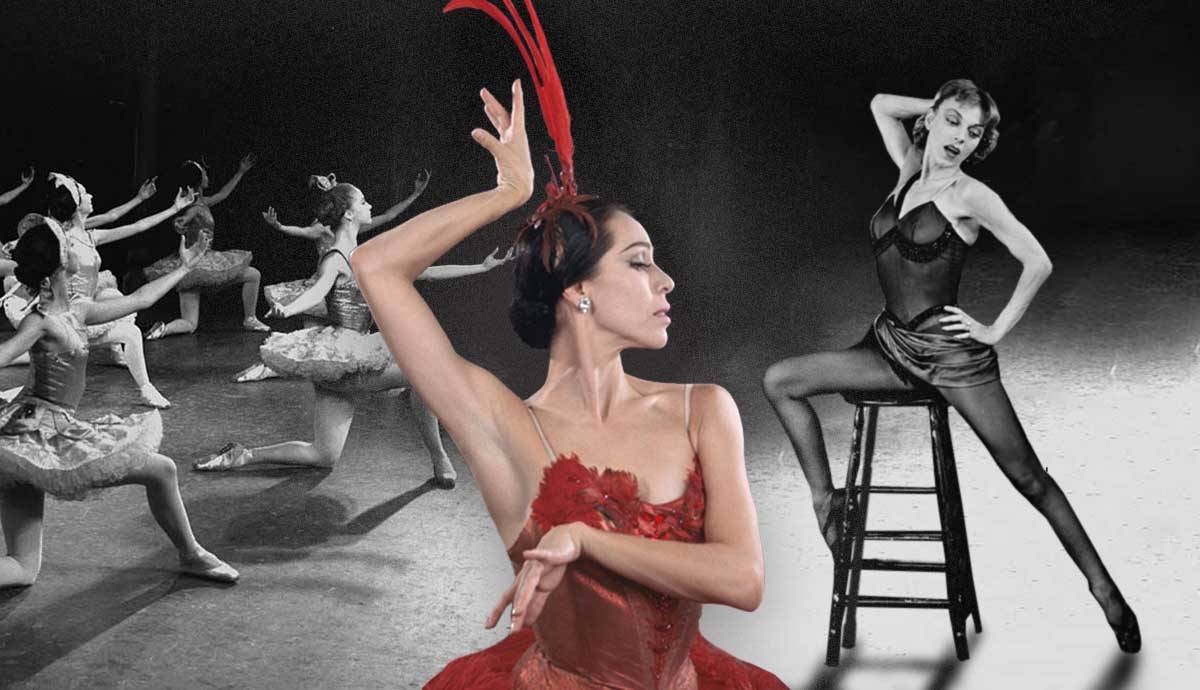 George Balanchine: almost 40 years after his death, the name still rings loudly across contemporary dance and ballet. Muffled and mumbled underneath the heralding of Balanchine, however, are several names of equal importance: Tamara Geva, Alexandra Danilova, Vera Zorina, Maria Tallchief, and Tanaquil LeClerq: the women–and wives–who brought his work to life.

During Balanchine’s reign over ballet, the power dynamic between dancer and choreographer became particularly imbalanced. Most importantly, the success of the performance or work was attributed to the brilliance of the male choreographer and not the virtuosity of the female dancers. Today, we recognize five famous ballerinas not only in the context of their marriage to Balanchine but for their immeasurable contributions to American ballet.

Tamara Geva was born in St. Petersburg, Russia, to a free-thinking family of artists. Geva’s father came from a Muslim family, and as a consequence, Geva had less access to opportunities than her Christian peers; but, as soon as the Mariinsky Ballet opened to non-christian students after the Russian Revolution, she enrolled as a night student, where she met Balanchine. Thus, a star was born.

In 1924 after defecting from revolutionary Russia with Balanchine, she performed with the legendary Ballets Russes. However, Sergei Diaghilev often positioned her in the corps de ballet, and she dreamt of more. Around the same time, Balanchine and Geva divorced in 1926 but remained great friends afterward, even traveling to America together. Performing with Nikita F. Balieff’s Chauve-Souris, an international theater company, Geva traveled to America, where she immediately received high praise.

Geva, performing two solos by Balanchine with the Chauve-Souris, introduced New York to his choreography upon her arrival. Moreover, this popular performance was fundamental in American ballet’s lineage. However, Geva herself would not remain exclusively tied to ballet. Instead, she became a Broadway star and producer, performing with the Ziegfeld Follies and more. In 1936, she performed as the lead in On Your Toes and subsequently became a phenomenon, receiving praise from critics and audiences alike. Throughout her career, she became interested in acting, comedy, and much more, preferring film. In fact, her list of film credits is quite long.

Geva made enormous contributions across the world of performance art and even published an autobiography about life through the Bolshevik Revolution. Through her documented life, she left a footprint of multi-faceted artistic brilliance that would inspire artists after her, as well as an example of survival and perseverance of art in the face of extreme struggle.

2. The Grandmother of Ballet: Alexandra Danilova

Performing works by Leonide Massine in New York City, Danilova brought ballet to the American public. In 1938 when she performed Gaité Parisienne, Danilova received standing ovation after standing ovation, night after night. Danilova was the centerpiece of the Ballets Russes de Monte Carlo and a key reason why the public became intrigued by the ballet.

After she retired from performance, Danilova pursued careers in Broadway and film. After experiencing some financial turmoil, however, Balanchine offered her a job at the School of American Ballet, where she would go on to instruct several generations of dancers. When she was in her 70s, Danilova starred in the box office hit The Turning Point, where she played someone somewhat like herself: a strict Russian teacher, instructing young ballerinas in the roles she originally helped craft.

Vera Zorina, born Eva Brigitta Hartwig, was a Norwegian ballerina, actress, and choreographer. Upon joining the Ballets Russes de Monte Carlo, she changed her name to Vera Zorina, and although the name brought her fame, she never liked it. In 1936, Zorina performed Sleeping Beauty in New York City, dancing in America for the first time. A year later, she performed in On Your Toes. In the years after, she would tour worldwide, starring in several key roles that would bring the world of the arts to life.

Her noteworthy film career, coinciding with the same years that she was married to Balanchine, is remembered as his “movie years,” or as part of a broader career. For Zorina, however, it is remembered as a short-lived career, even though she went on to work in new and fascinating ways. While in film, she played opposite Bob Hope in Louisiana Purchase and starred in the hit film The Goldwyn Follies. In her later years, she began roles as a narrator and a narrative producer. Eventually, she was appointed as the director of the Norwegian Opera and as a director and advisor of the Lincoln Center.

Most of Zorina’s films introduced the general public to ballet and made it vastly more accessible. Though her contributions to ballet are often overlooked, Zorina ensured that ballet could be consumed more widely and broadcast throughout the entire country instead of only existing in the lavish theater seats of New York City. Through Zorina’s career as a famous ballerina, high art merged with the mainstream, and thus ballet became more of a household name and aspiration.

Maria Tallchief is perhaps one of the most famous ballerinas of all time and is credited for her performances worldwide. In many ways, she helped establish the New York City Ballet itself with her seminal performance of The Firebird. Raised in the Osage Nation, Tallchief was the first American and first Indigenous American to hold the title of prima ballerina. Tallchief, described as “American as apple pie,” had an incredible career, and in many ways, her career marks the beginning of American ballet.

Trained under the legendary Bronislava Nijinska in Los Angeles, debuting with the Ballets Russes de Monte Carlo at the age of 17, and performing during New York City’s very first seasons, young Maria Tallchief worked with the industry’s best. Perhaps because she was set up with such a strong foundation, she was able to take the art form to new heights. Tallchief’s theatrical style, most likely inherited from Nijinska, revolutionized ballet and entranced audiences worldwide. In fact, she was the first American to be invited to perform with the legendary Moscow ballet–and during the Cold War, nonetheless.

Like Danilova, Tallchief became a legendary teacher, and her impassioned voice can be heard on several platforms. Her effects on teaching and performance are still being felt today. Most importantly, Tallchief was honored by the Osage Nation. In her career, she was asked to change her name to Tallchieva to sound more Russian, which she refused profusely. In addition to being a prolific star, Tallchief brought inclusion to the artform, something many still struggle and fight for today.

Tanaquil LeClerq, the daughter of a French philosopher, is remembered as “Balanchine’s first ballerina,” as she was the first prima ballerina to be trained by him from childhood. When her family moved to New York City when she was three, she began training in ballet, eventually attending the School of American Ballet. At the age of 15, she caught Balanchine’s eye and thus began performing in new, groundbreaking roles created by both Balanchine and Jerome Robbins.

Reportedly, Robbins and Balanchine were both entranced by her, with rumors even suggesting that Robbins joined the company because he was taken by her dancing. Though she married Balanchine at the age of 23 in 1952, Robbins and Balanchine both created sensational, lasting roles for her. LeClerq was the original Dew Drop Fairy from the Nutcracker, and Balanchine created many other works for her, including Symphony in C and Western Symphony. Robbins re-created the legendary work Afternoon of a Faun, in which she was the lead.

During the 1950s, when New York City was at a creative peak, the polio epidemic was ravaging the world, and more harshly, New York City. As a result, the company was instructed to take the new vaccine, which LeClerq refused to take. While on tour in Copenhagen, LeClerq collapsed. In a horrible turn of events, LeClerq became paralyzed from the waist down by polio in 1956. She would never dance again.

After years of trying to help with her treatment, Balanchine divorced her to pursue Suzanne Farrell, who would reject him and marry a male dancer at the company. Though Tanaquil’s career was short-lived, it was as bright as a fleeting comet. The roles and works that embodied the American Ballet technique perfected by her are still performed today, with her example in mind.

While imbalanced power dynamics and prioritizing the choreographer over the dancer are still common phenomena today, we always have the opportunity to revisit history and give credit where credit is due. While Balanchine’s choreography was, fairly indisputably, quite ingenious, it was the dancers who physically manifested it. Though the women received acclaim, respect, and attention during their time, it is an unfair and inaccurate misrepresentation to say that American ballet had a father. After all, Balanchine himself once said: “ballet is woman.”

In an art form where most of the top paid positions are men, yet 72% of the industry consists of women, it is important to recognize the art form has been made off the backs and sacrifices of women. Threading ballet with grace, virtuosity, and their own interpretations, ballet lived in the body of women. Tamara Geva, Alexandra Danilova, Vera Zorina, Maria Tallchief, and Tanaquil LeClerq were the American artform’s very temple in which it was housed. Because of these famous ballerinas, ballet found fertile soil in America.