HomeStoriesA Legendary Collaboration of the Arts: The History of the Ballets Russes

The effects of the Ballets Russes can still be found in today’s dance theater. Let's look into the bustling world of the 20th century’s most celebrated dance company. 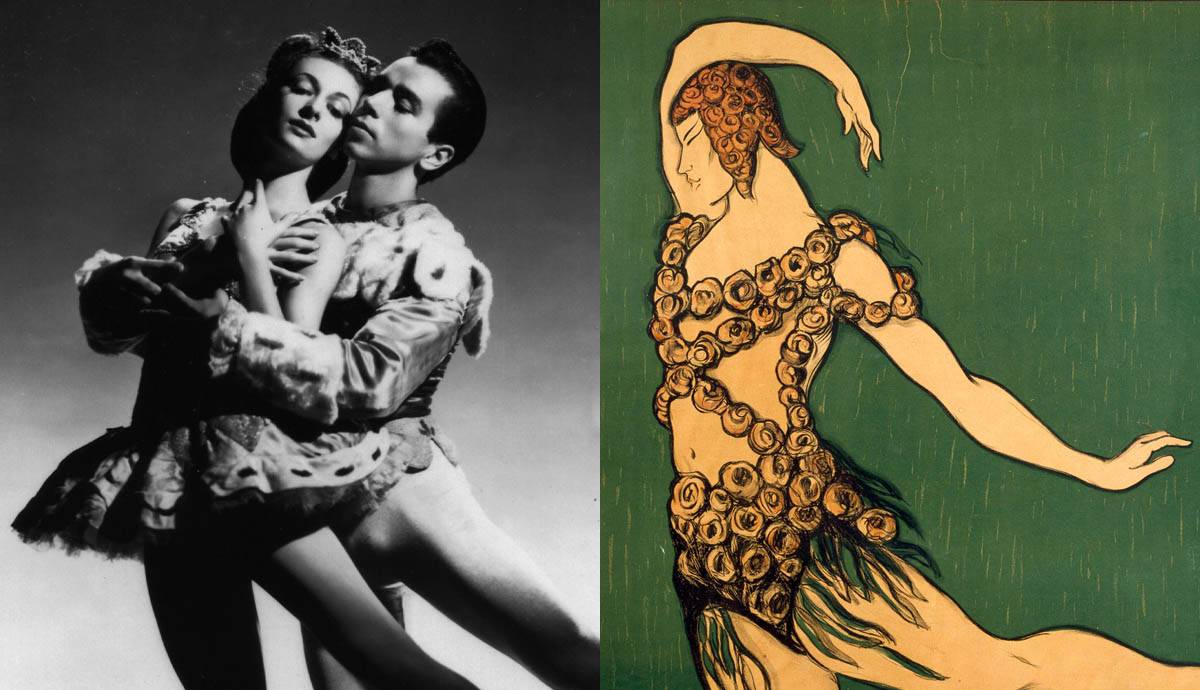 For a few centuries, ballet was French-led and defined by the Paris Opera Ballet. However, in 20th-century Paris, ballet became uniquely Russian. As Russia began to march towards revolution, Sergei Diaghilev looked towards Paris. In 1909, he founded The Ballets Russes, a ballet that would come to dominate the early 20th-century world.

Although most of the performers, composers, and choreographers were Russian, the company would never perform in revolutionary Russia; instead, they toured internationally, claiming worldwide attention. The Ballets Russes forever redefined ballet, artistic collaboration, modern performance, and dance theater through spectacular performances and infamous collaborations.

Most importantly, the Ballets Russes forever changed the course of ballet by making it widely popular, diversified, and more expressive. In remembering the brief, blazing life of The Ballets Russes, we can look into one of the most pivotal eras in dance history.

The Beginnings of the Ballets Russes: Sergei Diaghilev

The Ballets Russes quite literally began and ended with Sergei Diaghilev, the impresario, Artistic Director, and founder of the Ballets Russes. Although Diaghilev was not a choreographer or dancer himself, he commissioned many foundational dance works. In today’s scholarship, Diaghilev is widely credited for his ability to spot talent and facilitate collaboration. Even so, Diaghilev was complex; at times, a dictator and manipulator, at others, a genius. His notable romantic relationship with choreographer Vaslav Nijinksy, for example, was the center of much controversy. Regardless, his work would forever shift the culture of dance and performance.

Diaghilev was born into a wealthy family, and his stepmother encouraged a relationship with the arts. His family would host musical shows on Thursdays during his adolescence, with the notable Russian composer Modest Mussorgsky occasionally in attendance. Art was a part of  Diaghilev’s life from a young age, although he was reportedly not a talented artist himself.

After completing his schooling in Perm, Russia, Diaghilev began studying visual art in Europe. In 1906, Diagheliv organized a Russian Exhibition and returned in 1908 to present a musical concert. As the Russian Revolution took hold in Russia, Diaghilev immigrated to Paris, later founding the Ballets Russes in 1909.

As the Ballets Russes gained popularity, it became a hub for arts and culture. Diagehliv was a champion of modern art, championing avant-garde artists, compositions by Stravinsky, groundbreaking choreography, and more. Diaghilev kept experimentation as the company’s central value, favoring shocking new works.

Diaghilev had notoriously tumultuous relationships with many of his choreographers, so each choreographer’s career with the Ballets Russes was relatively short-lived. Nonetheless, many of their works are still referenced, performed, and reimagined today.

Choreographing from 1909-1912, Michel Fokine was the first choreographer to take the stage with the Ballets Russes. Fundamental to the company’s first era, 1909-1914 is considered the “Fokine Era” of the Ballets Russes. As a dancer and choreographer, Fokine felt that ballet had been stifled by tradition and was no longer progressing. A true pioneer, he renovated the dance style by adding fluid, expressive movements to ballet repertoire; additionally, he experimented with the corps de ballet, creating stunning group formations. Most importantly, he positioned the male dancer as the center focus.

Throughout his career, Fokine choreographed over 68 prolific works such as Les Sylphides, Scheherezade, Firebird, Petrushka, and Spectre de la Rose. After his career with the Ballets Russes, he moved to America and co-founded The American Ballet Company.

Vaslav Nijinsky was Fokine’s choreographic heir and often the center of Fokine’s work. Before he was a choreographer, Nijinsky was considered an incredible performer and was often crowned the best male dancer of his time. From 1912 to 1913, Nijinsky choreographed for the Ballets Russes. Expanding upon Fokine’s work, Nijinksky is credited for adding unique sculptural movements to ballet’s vernacular.

More than anything, Nijinsky is remembered for centering on pagan themes. More so than the other choreographers at the Ballets Russes, his works were considered to be illicit and shocking by contemporary audiences. Nijinsky choreographed the infamous Rite of Spring which incited a riot upon premiere. Although it was poorly received during his time, the Rite of Spring has been reperformed and reimagined by several infamous choreographers over the years, including by the legendary Pina Bausch.

After Nijinsky married in 1913, Diagheliv fired him from the company; the two had been romantically involved, and Diaghilev was reportedly furious to see him married. Some time afterward, Nijinsky was diagnosed with schizophrenia and spent the rest of his life in mental institutions.

Ushering in the next era of the Ballets Russes, Léonide Massine brought a new choreographic style to the ballet. Inspired by Russian folklore, Spanish dance, Cubism, and symphonic music, Massine brought yet another new perspective to the ever-evolving world of ballet. More so than his predecessors, he expanded upon narrative themes involving folk dance in many of his productions.

Nijinska’s choreography was neoclassical and focused on changes in culture. Centering on modern culture, her works like Les Noces and Le Train Bleu explored changing gender roles, leisure, and fashion. After the war began in 1939, Nijinska fled to America, founding her own dance school in Los Angeles.

Balanchine’s style was neoclassical and emphasized lightness, quickness, and musicality. In addition, Balanchine once again made women the star of ballet, essentially shifting ballet away from Fokine’s emphasis on the male dancer.

Before the Ballets Russes, ballet had a history of collaboration with other artistic disciplines. Edgar Degas, for example, painted Paris Opera ballerinas, and Tchaikovsky enjoyed an exceptional professional relationship with Marius Petipa. Under the Ballets Russes, however, productions were cohesive artistic explosions, pulling from several different forms and disciplines.

The Ballet collaborated with famed composers, including Igor Stravinsky, Sergei Prokofiev, and Eric Satie. The working relationship between the Ballets Russes and Igor Stravinsky, in particular, is one of the most notable exchanges in dance history. Their second collaboration, Pertoucska, was a wild success and ushered in a new era of art. Like the Ballets Russes’ choreography, Stravinsky’s music favored experimentation, resulting in explosive melodies and unique syncopation. Over the years, Stravinsky composed a multitude of pieces with the Ballets Russes, including some of his most famous works like The Firebird and The Rite of Spring.

Because the ballet was a crossroads for the arts to meet, the productions were enriched, cutting edge displays of top international talent. Yet, these productions were much more than that. As contemporary audiences sat watching these groundbreaking ballets, important groundwork was laid. Without the Ballets Russes, dance–and art–might look completely different.

The Ballets Russes: A Pivotal Point In Dance History

While the company only performed for 20 years, the Ballets Russes was fundamental to dance as a whole. The company was so influential that it has been dubbed “the most innovative dance company of the 20th century.”

Rather than repeat what was done before, Diaghilev preferred to continuously push boundaries. The Ballets Russes created new thematic material for the entire dance genre by combining Russian and Western European traditions, straying away from the tired historical romance plot. The Rite of Spring, for example, brought thematic inspiration from Russian rituals like Khorovod. Also displaying art movements like Cubism, Surrealism, and Futurism in real, moving time, the Ballets Russes brought abstraction to the theater. With these new thematic materials came a breath of fresh air for ballet.

In addition, the choreographers brought immense amounts of new movement vocabulary to dance. Choreographers at the Ballets Russes redefined dance, creating new techniques that emphasized all parts of the body, not just the hands and feet. Male virtuosity also exploded; under the Ballets Russes, new, incredible feats of the male body were added to a once female-centered form.

Most importantly, the Ballets Russes made dance a theater spectacle. With so many artists creating one revolutionary show, performance art advanced greatly. When people came to see the Ballets Russes, they came to see incredible creative accomplishments. As Diaghilev once said, “There is no interest in achieving the possible… but it is exceedingly interesting to perform the impossible.”