Maria Tallchief, the star of the 20th-century American dance world, was the first Indigenous American ballerina. Brilliant and stunning, Tallchief was the ultimate ambassador of ballet. 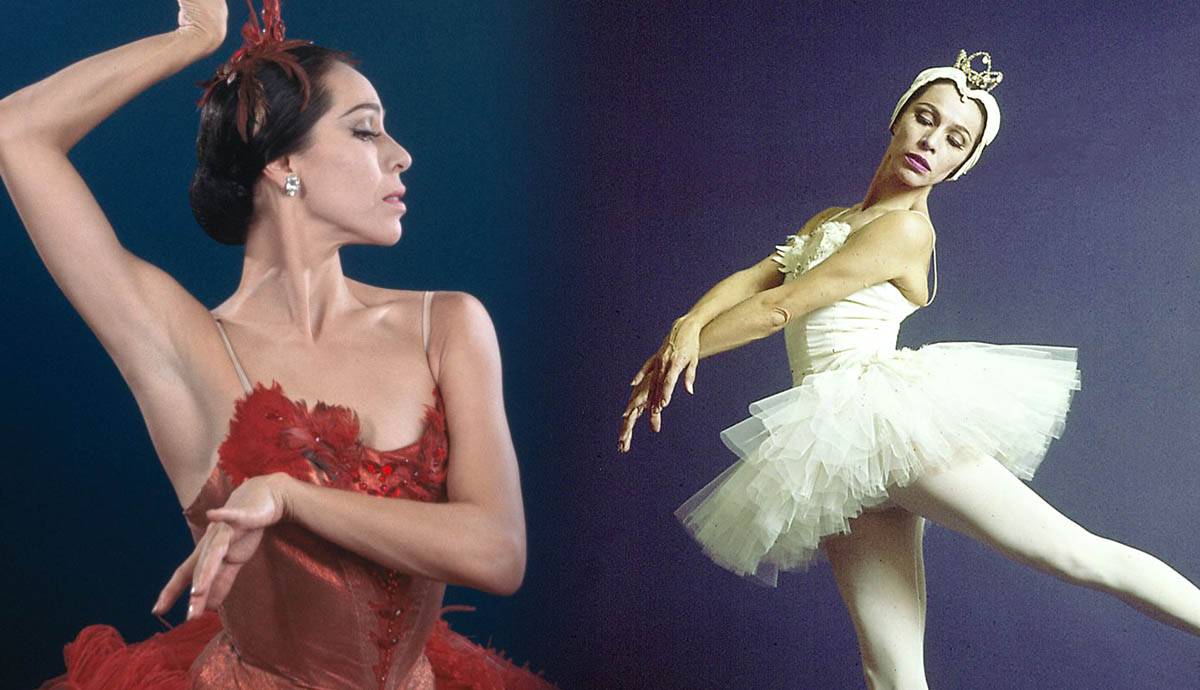 Before the 20th century, American ballet was nearly nonexistent. However, when the New York City Ballet came to be, that would all change. While much of the credit has been given to George Balanchine for defining American ballet, the artform’s popularity resulted from the technical expertise of ballerinas–most notably, Maria Tallchief.

Maria Tallchief was and remains the quintessential American ballerina and one of the most prolific ballerinas of all time. Tallchief, an indigenous American, captured the hearts of Americans, Europeans, and Russians alike. In a spectacular career spanning over 50 years, Tallchief redefined America’s artistic identity both at home and abroad.

Before she was a prima ballerina, Maria Tallchief was a young girl with great aspirations. Born as a member of the Osage Nation on a reservation in Oklahoma, Tallchief was born to an Indigenous American father and Scots-Irish mother, who called her “Betty Maria.” Because her family had helped negotiate a deal revolving around oil reserves on the reservation, Maria’s father was very influential within the community, so she thought he “owned the town.” During her early childhood, Tallchief would learn traditional indigenous dances, where she would grow a love for dance as an art form. Additionally, her Osage grandmother instilled a deep love of the Osage culture–something that would never leave Tallchief.

Hoping she might better the future for her children, Maria’s mother wanted to immerse her and her sister in fine arts. As a result, Maria and her family moved to Los Angeles when Maria was eight. At first, her mother thought it was Maria’s destiny to be a concert pianist, but that quickly changed as her dancing skills developed. At the age of 12, she began to train more seriously in ballet.

From her early training onwards, Maria Tallchief’s life shines a light on the interconnected webs of the dance industry. After moving to Los Angeles, Maria began to train with the infamous Bronislava Nijinska, a former choreographer and performer with the legendary Ballets Russes. Nijinska, the only woman to ever officially choreograph for the Ballets Russes, is known in retrospect as an under-credited and brilliant teacher, trailblazer, and figure within ballet history. Many argue that Nijinska was Tallchief’s most important teacher, “specializing in virtuoso footwork, upper-body styling, and ‘presence.’” These precise skills were exactly what separated Tallchief’s performance from others–particularly her stage presence.

Upon graduation at the age of 17, Tallchief moved to New York City and joined the Ballets Russes de Monte Carlo, a company that tried to revive and reunite the remaining members of the Ballets Russes. For her first solo in 1943, Tallchief performed a work by a familiar artist; she performed Chopin Concerto, a work originally choreographed by none other than her teacher, Bronislava Nijinska. Reportedly, her performance was an immediate success.

Maria gained fame and acclaim while performing with the Ballets Russes de Monte Carlo. After a few years, she was even invited by the grand, historic Paris Opera Ballet to come and perform as a guest artist. Moreover, during this time, she also met someone whose professional fate would become entangled with her own. Two years after Maria joined the Ballets Russes de Monte Carlo, she would meet George Balanchine: her primary choreographer, future boss, and future husband.

When Balanchine and Tallchief met, Balanchine had just filled the role of resident choreographer of the Ballets Russes de Monte Carlo, in short, making him her boss. They met while working on a Broadway show, Song of Norway, wherein the entire Ballets Russes de Monte Carlo served as the cast. Tallchief quickly became his personal muse and the centerpiece of all his ballets. However, Tallchief was not the only dancer to experience this dynamic with Balanchine: third in his list of wives, Tallchief was neither his first nor his last.

Because Tallchief wrote an autobiography, we know a fair amount about the strange and exploitative conditions of their marriage. Joan Acollea, a dance historian with the New Yorker, writes:

“…He decided that they should get married. He was twenty-one years older than she. She told him that she wasn’t sure she loved him. He said that was O.K., and so she went ahead. Unsurprisingly, it was not a marriage of passion (in her 1997 autobiography, written with Larry Kaplan, she strongly suggests that it was sexless), or the passion was for ballet.”

While they were married, Balanchine cast her in lead roles, which she, in turn, made phenomenal. After leaving the Ballets Russes de Monte Carlo, the two moved on to establish The New York City Ballet. Her Firebird performance, which was the resounding success of the NYCB itself, launched her career worldwide. In an interview, she reminisced about the crowd’s reaction to her first FireBird performance, remarking that “the City Center sounded like a football stadium after a touchdown…” and that they hadn’t even prepared a bow. With the Firebird came the rise of America’s very first famous ballerina and America’s very first ballet.

Balanchine is given much of the credit for bringing ballet to America, but Tallchief is equally responsible for the artform’s survival and prevalence in the United States. She is generally known as America’s first prima ballerina, and the New York City Ballet would not have experienced the success it has now without her foundational Firebird performance. Although Maria Tallchief is mainly remembered for her work with the New York City Ballet and her marriage to Balanchine, like Njinska, she is not credited enough for her achievements; whether before, during, or after Balanchine.

Quick, dynamic, fierce, and passionate, Tallchief captivated audiences. Throughout the rest of her time with Balanchine and the New York City Ballet, she danced several incredible roles and helped solidify the New York City Ballet’s place worldwide. As the principal dancer, she performed lead roles in Swan Lake (1951), Serenade (1952), Scotch Symphony (1952), and The Nutcracker (1954). More specifically, her role as the Sugar Plum Fairy brought a new vibrant spin to The Nutcracker. But, as Balanchine turned his eye away from Tallchief and towards Tanaquil Le Clercq (his next wife), Maria would go elsewhere.

As Tallchief’s career changed directions, she explored different places and avenues of performance. While she didn’t remain affiliated with any specific institution for too long, she enjoyed a long career after her time with the NYCB. For women in ballet, it’s difficult to gain any autonomy as a performer. Tallchief, though, was able to maintain agency throughout her career. In the early 1950s, when she returned to the Ballets Russes de Monte Carlo, she was paid $2000.00 a week–the highest paid salary for any ballerina at the time.

In 1960, she began performing with the American Ballet Theater and soon transferred to the Hamburg Ballet Theater in Germany in 1962. She even performed in film and appeared on American TV shows, playing the famous ballerina Anna Pavlova in the movie Million Dollar Mermaid. Most remarkably, she was the first American ballerina to be invited to perform with the Bolshoi Ballet in Moscow, and during the Cold War nonetheless.

After some time, though, Maria decided to retire from performance, feeling she was no longer in her prime. Her last performance was Peter van Dyk’s Cinderella, performed in 1966. While trying to find a home for her choreography and instruction, she turned to Chicago, where she founded the Chicago Lyric Ballet, then the Chicago City Ballet, where she was very beloved. Throughout the rest of her life, she maintained a rotating prevalence in the world of ballet, even receiving an honor from The Kennedy Center.

Tallchief was one of the most legendary performers of all time, both in the US and abroad, and her list of awards, credentials, and honors can seem endless. From the Paris Opera Ballet to the New York City Ballet, Maria Tallchief helped redefine entire ballet companies. In fact, it is speculated that her 1947 Paris Opera performance helped repair the ballet’s reputation, whose previous artistic director collaborated with the Nazis. Across the world, leading companies owe their reputation to the virtuosity and hard work of Maria Tallchief.

Most importantly, Tallchief achieved superstar status without compromising her values. Although she faced frequent discrimination, Maria Tallchief always remembered her roots with pride. In Los Angeles, while training under Nijinska, her classmates would “war whoop” at her. While performing with the Ballets Russes, she was asked to change her last name to Tallchieva to sound more Russian, but she refused. She was proud of who she was and wanted to pay homage to her roots. She was formally honored by the Osage Nation, who named her Princess Wa-Xthe-Thomba, or “woman of two worlds.”

In her later years as a teacher, Maria Tallchief frequently appeared in interviews as a passionate and informed instructor. Her love, understanding, and perfection of the art form can be found in her own words:

“From your first plié you are learning to become an artist. In every sense of the word, you are poetry in motion. And if you are fortunate enough…you are actually the music.”