George Balanchine is known as “The Father of American Ballet,” but the brilliant and chaotic effects of the international superstar are not only felt in America but throughout the world. 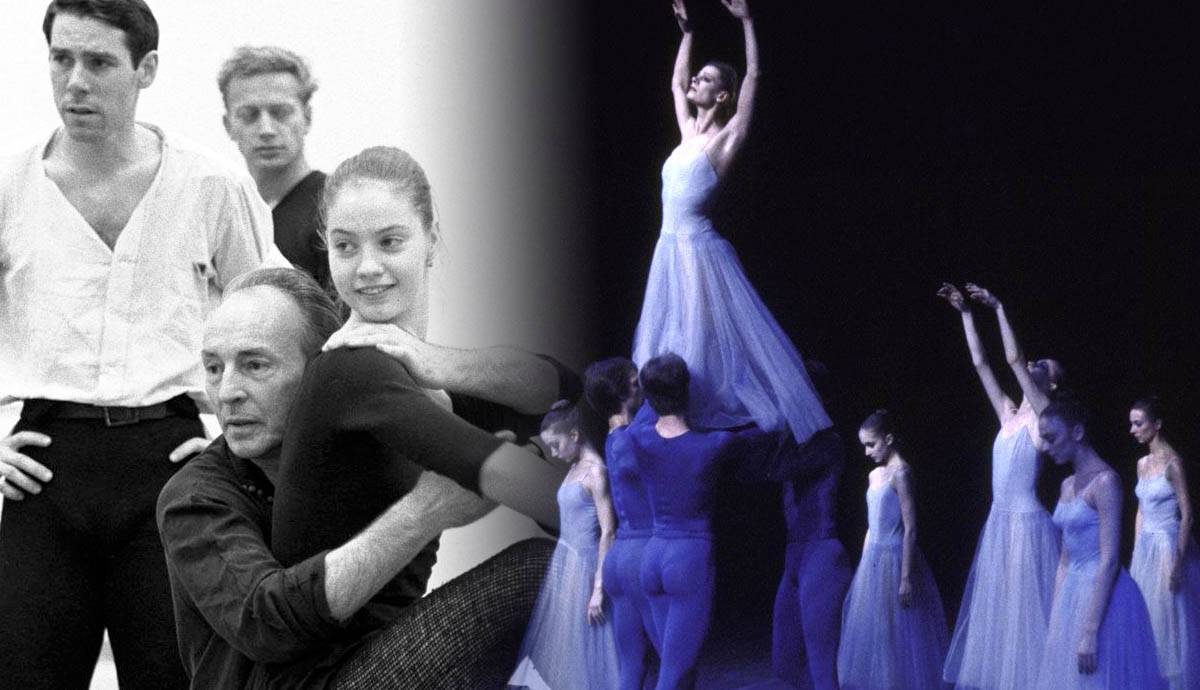 In the early 20th century, Russia was considered the world champion of ballet, producing technical virtuosos, spectacular performers, and the 20th century’s most prolific choreographers. Moreover, Balanchine was one of these prolific choreographers and a witness and student of other Russian dance icons. From his childhood and early adulthood in Russia, Balanchine received a unique artistic skill set. In fact, his challenging, athletic, and musical style has roots in his earliest training.

George Balanchine was born in 1904 in St. Petersburg, Russia, to a Georgian musical composer. Encouraged by his mother and father, he began to pursue the arts. As young as five years old, he began to study piano, and at the age of ten, he joined the Imperial Theater School of Ballet. From this early training, Balanchine gained an instinctual musicality and practiced world-renowned, comprehensive ballet techniques.

After graduating from the Imperial Theater School in 1921 at 17, Balanchine began work at The Mariinsky Theater, then named The State Theater of Opera and Ballet. During this time, he also began choreographing. Before graduation, he set his first piece, a duet called La Nuit, performed by himself and a fellow female dancer. After graduation, he continued his musical studies, focusing on piano, counterpoint, harmony, and composition. While Balanchine was performing in Russia, he would also try experimental choreography that broke away from Russian conventions and was threatened for doing so.

Subsequently, while touring Europe in 1924, George Balanchine refused to return to the new Soviet Union. Alongside him was his first wife, Tamara Geva, as well as Russian dancers Alexandra Danilova and Nicholas Efimov. These four dancers would be seen in London by none other than the infamous Sergei Diaghilev. After that, they would all become international figures in the world of dance.

Time With the Ballets Russes

Over his four years at the Ballets Russes, Balanchine would choreograph crucial works like Apollo and Prodigal Son. Furthermore, he would develop his trademark Neoclassical style. Under previous choreographers at the Ballet Russes, the artform’s romantic traditions had been utterly shattered in the name of avant-garde ideals and modernist thought. Under Balanchine, many conventions would remain broken, but Romantic-Era themes would return. Balanchine would once again return to Greco-Roman themes and classical aesthetics, all while keeping the abstraction and experimentation that came before him.

Balanchine’s time with the Ballets Russes was the first real leg of his career, and it was a critical period in his life. Firstly, it would establish his Neoclassical style and two of his most famous works; secondly, it would facilitate a life-long relationship with composer Igor Stravinsky; and lastly, it would launch his career internationally. Nevertheless, although Balanchine’s career had a running start, his future would not be so clear after Diaghilev’s death; for nearly two decades, he would travel across the world in an attempt to find a home domain for his choreography.

From early adulthood, George Balanchine’s life had been defined by international travel and immigration. From his departure from The Soviet Union to the founding of the New York City Ballet, his road was long and winding. That, however, is not to say it was useless; his time abroad bore many fruits.

In 1933, Balanchine formed his own company, Les Ballets, in Paris. While choreographing with Les Ballets, Balanchine would be seen by Leonard Kirstein, who would be fundamental in the founding of The New York City Ballet. Once he was introduced to Balanchine by Romola Nijinsky, wife of famous choreographer Vaslav Nijinsky, Leonard Kerstein shared his dream of an American Ballet. Convinced, Balanchine moved to New York, and together they founded The School of American Ballet in 1934, which today is a world-renowned company. One of Balanchine’s most infamous works, Serenade, was choreographed for students at the SAB that same year.

Around the same time in 1935, Balanchine and Kerstein created the American Ballet, which, in short, was unsuccessful. Afterward, they were invited by the Metropolitan Ballet in New York City to become the resident ballet. In 1938, that too fell through due to low funding and artistic differences. Immediately after, Balanchine took his dancers to Hollywood and began working in film. Sometime after that, Balanchine and Kirstein created the American Ballet Caravan, touring in South America. After the tour, the Ballet Caravan disbanded. Once again returning to the Ballets Russes de Monte Carlo after Massine left, Balanchine choreographed for the company’s worldwide tours. From 1944 to 1946, the company extensively toured in America; thus, the US became well-acquainted with George Balanchine.

In 1947, Balanchine and Kirstein formed the Ballet Society, a subscription-based performance company aimed at wealthy patrons. After witnessing a performance of Orpheus, wealthy patron Morton Baum invited Balanchine to join the City Center, now known as the Lincoln Center. Finally, the hallmark of Balanchine’s career was solidified; the New York City Ballet was born.

At the age of 43, Balanchine’s choreography had found a home at the New York City Ballet. As Artistic Director of the NYCB, Balanchine choreographed numerous works still performed today across the world. In addition, the NYCB and Balanchine would also become the face of American ballet at home and abroad. Balanchine’s light, speedy pointework, experimental abstraction, and neoclassical themes would be labeled an American archetype.

While at the New York City Ballet, Balanchine would produce a multitude of works, including famous works like Jewels, Stars and Stripes, Agon, and Vienna Waltzes. While at the NYCB, he continued to explore his neoclassical style and developed it further; he created his signature “leotard ballets” and reworked ballet staples like The Nutcracker, Sleeping Beauty, and The Firebird in the Balanchine style. However, while it was a bountiful time for his choreography, it was also a tense time; Balanchine’s time with the New York City Ballet just so happened to coincide with the height of the Cold War.

As an immigrant from Eastern Europe with deep American patriotism, Balanchine was in a peculiar position as a cultural ambassador. Under the 1958 Lacy-Zarubin agreement, the USA and Russia agreed to diplomacy through cultural and educational exchanges. Artists including Martha Graham, Alvin Ailey, and Balanchine himself traveled to the Soviet Union and other countries on behalf of the USA.

Consequently, in 1962, the New York City Ballet toured Soviet Russia. Although many thought Balanchine’s work wouldn’t be received well, opinions were mixed. The influence of the Ballets Russes and Russian technique was found within his work by Russian audiences. At the same time, some audience members, accustomed to the linear nature of Russian theater, did not understand the abstract nature of his work. In either case, Balanchine served as a cultural connection between two opposing countries. However, although Balanchine was a uniting link in a strained time, he also harmed international dance.

The Darkness of Balanchine: Man as Creator & Woman as Created

Although Balanchine’s treatment of women is often overlooked in favor of his genius, it is vital to recognize the destructive effects he had on dance hierarchy. At the New York City Ballet, the male choreographer was the creator and the female dancer was the created. In many ways, this meant that the female dancer had little artistic and personal autonomy. Women dancing under Balanchine were at the mercy of his personal tastes and whims.

Balanchine had a habit of marrying his workers; perhaps he picked up the habit from Diaghilev. In the past, he had married Tamara Geva and Vera Zorina, both of whom were often the subjects of his work. While at the NYCB, he had married both Maria Tallchief and Tanquil Le Clercq. Additionally, he also pursued dancer Suzanne Farrel. These women were all prolific dancers in their own right; Maria Tallchief, for example, was the first indigenous American ballerina. Gelsey Kirkland, a famed ballerina, states that Balanchine was a womanizer through and through and potentially used his influence to secure these marriages.

George Balanchine is known for his mistreatment of women through the romantic pursuit of his workers and the body image ideals he pushed on his female dancers. To Balanchine, a successful ballerina was thin and as quick as a hummingbird. His influence on women’s weights within the art form, in particular, has had widespread, horrific effects on female dancers everywhere and stubbornly persist even past his death. By the same token, romantic and sexual exploitation still exist at the NYCB as well. Allegations of abuse, like the case against Peter Martins and the case for Alexandria Waterbury, remain central at the NYCB. Balanchine’s legacy, moreover, is to be critiqued as much as it is celebrated.

The Legacy of George Balanchine

Inarguably, George Balanchine’s style was foundational to American ballet and contemporary ballet worldwide. His vast body of work is still in modern-day repertoire and can be found from the New York City Ballet to the Bolshoi to the Paris Opera Ballet. Through the lens of Balanchine, we can find connections to points, people, and places in dance history–both good and bad.

Skills and creativity aside, Balanchine spread vicious teaching methods and impossible beauty standards. The Balanchine ballerina and the New York City Ballet, moreover, haunt the better components of his legacy. As we remember his influence on the artistic side of dance heritage, it is also imperative to recognize his impact on the company culture of dance heritage. After all, George Balanchine cast a large shadow that still looms over us today.