HomeStoriesExploitation in Ballet History: Prostitution at the Paris Opera Ballet

Ballet history is littered with female superstars, but it has historically exploited women and girls, particularly in 19th century Paris. 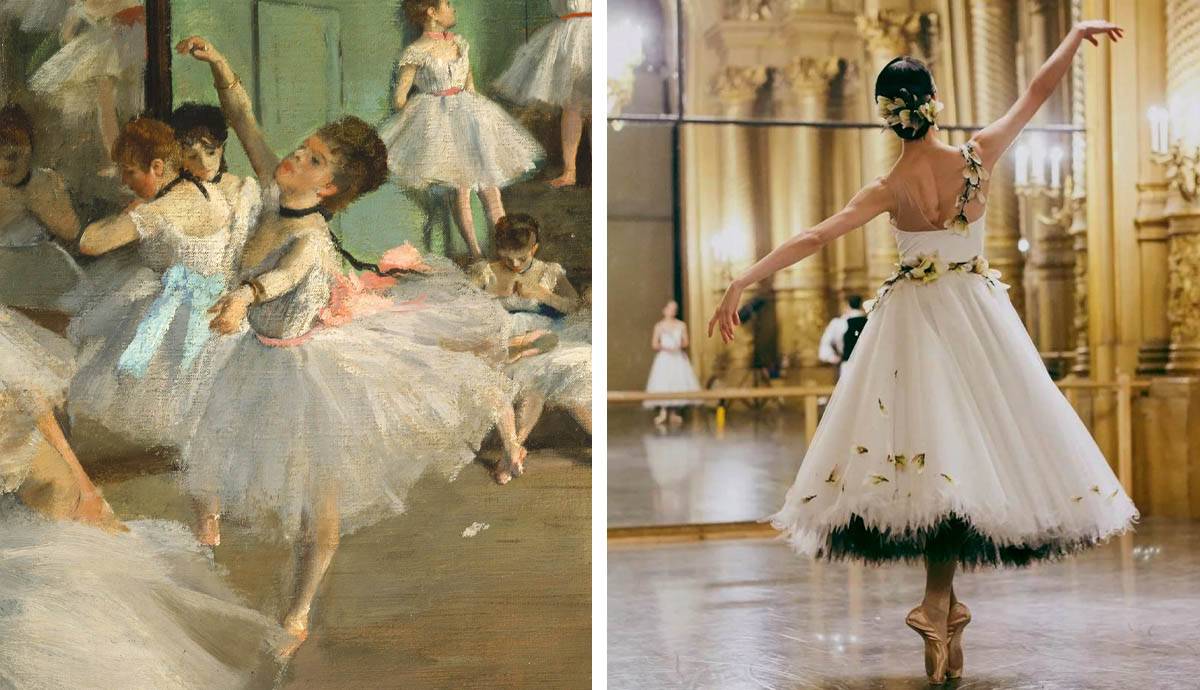 As of 2018, 72% of ballet dancers identified as women, yet 72% of artistic directors identified as men. While women vastly outnumber men in ballet, men still hold the majority of positions of power within the field. Why? While this dynamic might feel new, surveying ballet history can provide an explanation for modern day power imbalances. Unequal power dynamics between men and women can be found throughout ballet’s global history—but most notably, in the Paris Opera Ballet’s foyer de la danse.

The foyer de la danse was a backstage room that essentially served as a brothel. While other international ballets at the time had similar practices, the 19th century Paris Opera Ballet is one of the most noted cases of sexual exploitation in ballet history.

Paris was an art hub during this era, and ballerinas were often the centerpieces of Impressionist artwork. Edgar Degas, for example, created artworks that centered on the Paris Opera ballerina. While his work is often viewed as fantastical to a modern audience, a 19th-century audience would have picked up the dark figures looming among the ballerinas. So—what was Degas depicting?

Paris: The Birthplace of Ballet History

In many ways, the decisions and practices of The Paris Opera Ballet ripple throughout ballet history to today; consequently, it is important to understand the historical context around such exploitation.

Although ballet originated in Italy, it became uniquely French after Catherine de Medici brought it to the French court. Afterward, ballet became a hallmark artform of French royalty. King Louis XIV himself was one of the most prominent patrons of ballet—so much so that he institutionalized it.

In 1669, Louis XIV founded the Paris Opera ballet, then called the Académie Royale de Danse. During the ornate era of the Sun King, ballet looked very different. Instead of a stage, the ballet was mainly performed in the French court; and very unlike today, it was only performed by men.

It wasn’t until events like the French Revolution and the unstable reign of Napoleon Bonaparte in the 1700s that social barriers started to weaken. During this time, women started to claim more agency in ballet. In the 1800s, Marie Taglioni went en pointe—forever marking the artform as feminine.

Taglioni also had remarkable agency over her body. Forever revolutionizing ballet fashion, Taglioni was able to shorten her tutu—an act that was scandalous in 19th-century France. However, while the superstars of the Romantic Era enjoyed slight autonomy, it was short-lived.

In the late 19th century, Paris was influenced by rapid industrialization and cultural change. Homelessness and poverty skyrocketed, but at the same time, Paris’ upper class still held onto its many cultural habits. Additionally, the art world and its various artistic forms centered on femininity. To escape poverty and homelessness, many young women turned to ballet: an art form made for and consumed by the upper classes.

While the Paris Opera Ballet seemed like it might offer security to young dancers, it was not the case. Instead, the Paris Opera Ballet created a highly competitive and unstable environment, where dancers would need to secure a highly elusive contract—by any means necessary. In the meantime, the women were often used for profit in the foyer de la danse.

The foyer de la danse was a lavish room at the Paris Opera Ballet where wealthy patrons could pay to socialize with ballerinas. Because of many social and economic conditions, The Paris Opera Ballet struggled financially throughout the last half of the 19th century. Many thought that most of the ballet’s income in the 19th century came from the foyer de la danse, as men were willing to pay extra to socialize with the ballerinas.

Although the petit rats, young ingenues training to be dancers, are still a part of the Paris Opera Ballet, many of their earlier counterparts faced harsher circumstances throughout ballet history. In the 19th century, the women that were recruited to join the Paris Opera Ballet were often impoverished, vulnerable young women. The dancers at the bottom of the company hierarchy, or the petit rats, were the most vulnerable to abuse and exploitation.

After rigorous testing and apprenticeships, the ballerinas might finally be admitted to the company on a good contract. For many petit rats, a good contract never happened, and they were forced to work with continual manipulation and exploitation.

The petit rats were also the subject of many artworks. Most notably, the famous sculpture Little Dancer Aged Fourteen by Degas is modeled after Marie van Goethem. To this day, she remains one of the most famous petit rats. However, little is known about her life after she left the Paris Opera Ballet. Although she is memorialized forever through Degas’ work, she was ultimately seen as disposable by Parisian society.

Marie van Goethem is an oft-forgotten figure in ballet history but has become the representative for the petit rats of the 19th century. Like many of the other petit rats, Marie lived a life of hardship. Her family lived in a district that was commonly associated with poverty and maisons closes. Her mother encouraged her and her younger sister to pursue ballet in order to escape from their impoverished living conditions. It is also speculated that Marie and her sister became call girls to make ends meet—both inside and outside the Paris Opera Ballet.

While at the Paris Opera Ballet, Marie worked around 10-12 hours a day, 6-7 days a week under terrible conditions. The petit rats were notoriously malnourished and overworked. After she began art modeling, she could not keep up with the strenuous schedule of the ballet and was consequently fired. Like many other petit rats, Marie Van Goethem never secured a good contract and remained in a life of poverty until her unknown death.

The relationship between Degas and Marie has been the subject of much controversy. At a very young age, she was asked to model nude for Degas. As a result of her financial situation, she was hardly in a position to say no. Naturally, many wonder about the sexual implications of their relationship, but Degas was notoriously disgusted by women.

Regardless of the manner of their relationship, Marie did not benefit from it. Like many of the other petit rats, Marie died in poverty—despite being the centerpiece of one of the most famous artworks of all time. Degas himself has a history with the ballet before and after Marie and would go on to enjoy fame, reputation, and fortune. Later in life, Degas would even become a patron of the ballet himself—or an abonné.

The Abonnés were a group of wealthy men that subscribed to the Paris Opera Ballet for special privileges. They would frequently harass the ballet dancers in their dressing rooms, in the Opera wings, and in the foyer de la danse. At any given moment, they could seek sexual favors from them.

When an abonné claimed one girl, they would often sponsor her at the ballet so she might get a contract. In exchange, she was expected to become his mistress. So common was this phenomenon that it became a literary trope. In 1859, a writer for the newspaper Le Figaro stated: “There is not one Parisian novel which does not introduce a banker or man of fashion who keeps a ballet girl of the Opera.”

However, while the men weren’t judged, the women often were depicted as social climbers looking to escape their class. Despite the fact that these women had very little resources or support to say no to the abonnés, they were often held responsible for the power dynamic.

Most importantly, the sexual and labor exploitation they experienced was usually not enough to lift them from poverty. To the abonnés and the Paris Opera Ballet, petit rats were often disposable.

The relationship between the abonnés and the petit rats was one of manipulation and exploitation. However, while it might seem like a long time ago, such a dynamic is a repetitive pattern in ballet history. From The Palais Garnier to the New York City ballet, this dynamic precedes and succeeds the 19th century.

As more public figures like Dusty Button are called out today for sexual exploitation, it is hard to argue that the past is in the past. Degas’ looming figures are very much still with us today. As we look through the lens of ballet history, hopefully, we become more equipped to recognize the present.