Ballet in America was almost non-existent until Balanchine founded the New York City Ballet. Through this company, ballet became an American art – for better or worse. 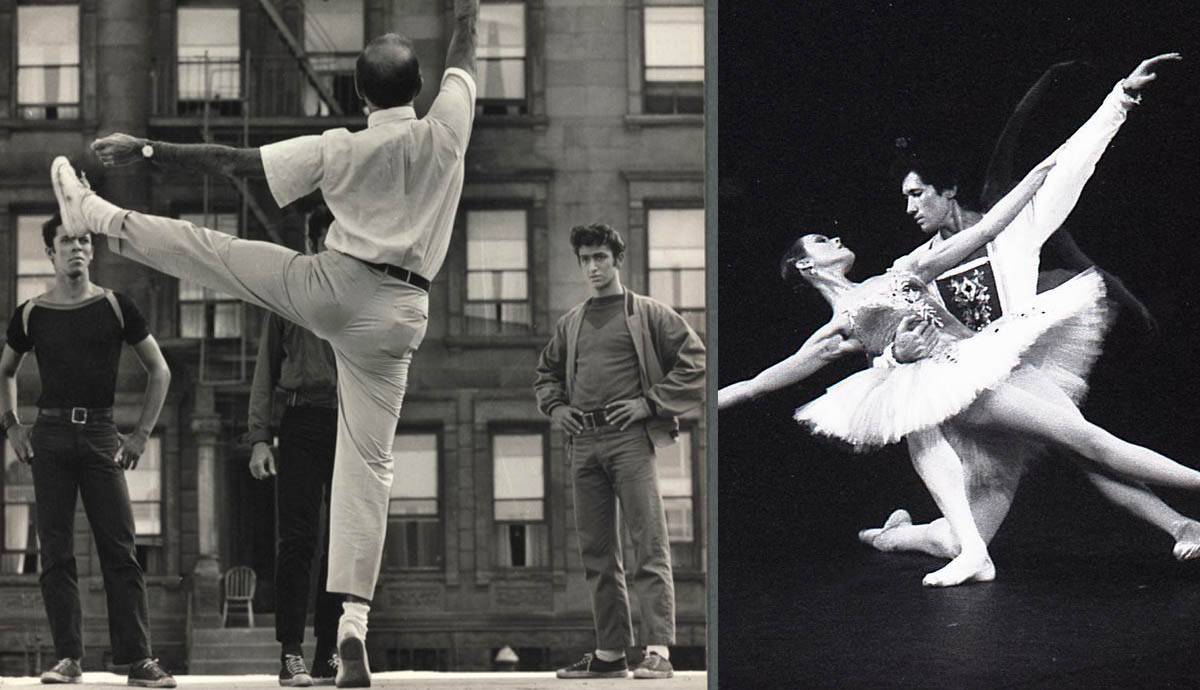 As the last choreographer of the Ballets Russes, George Balanchine carried the legacy of the revolutionary ballet on his back. He traveled and performed worldwide for nearly two decades, trying to establish a reputable home for his choreography. When he finally and firmly established himself in New York City in 1948, he was able to do just that and more.

When Balanchine carried ballet to New York City, he was equipped with a bag of brilliant artistic values. To New York, he brought modernism, musicality, experimental footwork and lifts, and unparalleled creativity. But, he also carried another bag: to America, he held an authoritarian mentality and damaging gender dynamics. These two bags, jumbled together, created a colorful yet tumultuous foundation for the New York City Ballet. As we survey the New York City Ballet’s history, we can see how Balanchine defined the company culture with ingenuity, ruthlessness, creativity, and cruelty.

Balanchine: From Wandering Nomad to Founder of the New York City Ballet

Known as the father of American ballet, Balanchine shaped the course of ballet in the United States. Forever impacting dance theater worldwide, Balanchine’s own multidimensional training changed the genetic structure of the artform.

As the son of a Georgian composer, Balanchine was trained in music and dance at the Imperial School in Russia. His early musical training would become intrinsic to his syncopated choreographic style, as well as vital to his collaborations with composers like Stravinsky and Rachmaninoff. Even now, this unique musicality distinguishes the New York City Ballet’s choreographic style from other ballets.

As a graduated and mature performer, Balanchine toured with the newly formed Soviet Union; but in 1924, he defected alongside four other legendary performers.

Although Balanchine was the artist who would physically create American ballet, a man named Lincoln Kirstein was the one who conceptualized it. Kirstein, a ballet patron from Boston, wanted to create an American ballet company that could compete with European and Russian ballet. After watching his choreography, Kirstein thought Balanchine might be the perfect choreographer to execute his American ballet ambitions. After convincing Balanchine to move to America, their first act was to found the School of American Ballet in 1934. Today, SAB is the most prestigious ballet school in America, bringing in students from all over the world.

Although the founding of SAB was successful, Balanchine and Kirstein still had a winding road ahead of them. After they founded the dance school in 1934, their next act was to open a touring company called the American Ballet. Almost immediately after, the Metropolitan Opera invited Balanchine’s ballet to formally join the opera. Unfortunately, they parted ways in 1938 after a few brief years, partially due to low funding. Afterward, from 1941 to 1948, Balanchine began to travel again; first, he toured South America with the American Ballet Caravan sponsored by Nelson Rockefeller, then he served as Artistic Director for the Ballets Russes.

The New York City Ballet finally became a reality in 1948. After Kirstein and Balanchine began offering subscription-based shows for wealthy patrons in New York, they were discovered by a wealthy banker called Morton Baum. After watching the performance, Baum invited them to join the City Center municipal complex, alongside the Opera, as the “New York City Ballet.” After a long time of wandering, Balanchine had finally founded a permanent company, the crowning achievement of his career. Nevertheless, the company’s legacy and history, much like Balanchine’s long journey abroad, is full of twists and turns.

Themes & Styles of the American Ballet

As the company took off, Balanchine began to expand upon themes he initially developed at the Ballets Russes. With an international career and acclaimed repertoire under his belt, he had the stability and autonomy to choreograph at his own free will. As a result, his trademark style, Neoclassicism, flourished at the NYC Ballet; but at the same time, his own choreographic voice evolved in many other dynamic ways.

Over the span of his career, Balanchine choreographed over 400 works with great variations in technique, music, and genre. In some works like Agon, Balanchine focused on minimalist aesthetics, stripping his dancers of tutus down to leotards and tights. These works by Balanchine with minimal costuming and setting, often called “leotard ballets” by professional dancers, helped establish the reputation of NYCB’s choreography. Even without ornate sets and costuming, NYCB’s movement was interesting enough to stand on its own.

As Assistant Artistic Director, Jerome Robbins would also create significant lasting choreography at the New York City Ballet. Working on Broadway and with the ballet company, Robbins brought a different perspective to the entire world of dance. Known for fantastic works like Fancy-Free, West Side Story, and The Cage, Robbins’ choreography utilized American themes by incorporating jazz, contemporary, and vernacular dance moves into the world of ballet. Although Robbins’ fairly narrative style was quite different from Balanchine’s, the two worked harmoniously.

Although the New York City Ballet can trace its lineage back to many cultures, it has become the face of American ballet. Between Robbins and Balanchine, the two defined American dance, and so the New York City Ballet became a symbol of American patriotism. As a symbol of American pride, Balanchine choreographed Stars and Stripes, in which a huge American Flag is displayed. In a Cold War cultural exchange in 1962, the NYCB represented America during a tour of the Soviet Union. Additionally, Robbin’s creations took from (and sometimes appropriated) different American cultural dances, making the company even more quintessentially American.

Singularly American even outside of theme, Balanchine’s dance would set the physical dimensions for what American dance looked like. His technical hallmarks, like his quick pointe work, complex group formations and sequences, and his signature hands, are still heavily associated with American national dance. Even with the nation’s pride considered, it is important to remember that there were real ramifications on the performers: most notably, the ballerinas of the New York City Ballet.

Ballet had become male-dominated under previous choreographers like Fokine and Nijinsky at The Ballets Russes. Balanchine, however, made women the superstar of the ballet again–but at a certain cost. Balanchine often stated, “Ballet is Woman,” preferring the physical lines of female dancers. Instead of reading in terms of female empowerment, the statement more aptly compares the ballerina to a physical instrument. Although the New York City Ballet puts women front and center on the stage, the ballet is still frequently criticized for its treatment of girls and women.

The same movement qualities and thematic materials that the NYC Ballet is lauded for have proved detrimental to its female dancers. The Balanchine ballerina was unlike any other performer in the world at the time. Unlike the Romantic-Era ballerina, she was aloof, quick-footed, and seductive; but to be quick, Balanchine thought she had to be incredibly thin. Ballerina Gelsey Kirkland, in her book Dancing on my Grave, argues that Balanchine’s ruthlessness, exploitation, and manipulation led to many mental disorders for her and others. Kirkland claims that Balanchine fundamentally damaged his dancers to their core. Put simply, Kirkland states that Balanchine’s behaviors around dancers’ weight, his inappropriate relationships with dancers, and his authoritarian leadership destroyed many.

Although women were the star of the Balanchine ballet, the men pulled the strings behind the scenes: the choreographers were men and the dancers women. Inside and outside the classroom, Balanchine also had a long history of inappropriate relationships with his workers. All four of Balanchine’s wives also worked for him as ballerinas and were much younger than him.

While known for its legendary choreography, the New York City Ballet also has a legacy of publicly documented abuse. Even today, exploitation is still a regular, hushed occurrence. In 2018, Alexandria Waterbury spoke out against company male NYCB company members, who were exchanging nude photos of her and other female dancers without consent, threatening sexual assault alongside the attached images. Before that, the Artistic Director of the NYC Ballet, Peter Martins, was accused of longstanding sexual assault and psychical abuse.

Men were not immune to the trials of the New York City Ballet, either. Gelsey Kirkland’s autobiography is dedicated to NYCB dancer Joseph Duell, who committed suicide in 1986, an event she attributes to the stresses of the NYC ballet lifestyle.

This dark side of the New York City Ballet has unfortunately continued on, leading to tragedy and scandal. In the broader scope of dance history, the New York City Ballet is just one example in a centuries-long list of worker abuse in the dance world. If we survey history, Balanchine’s relationships with his wives even mimic that of Diaghilev and Nijinsky. Like many other ballets, the NYCB has to reckon with its company history.

The New York City Ballet: Both Sides of the Curtain

Like many other ballets, the winding tale of the NYC Ballet is complex. While the history of the New York City Ballet is written with colorful choreography, an exceptional dance lineage, and a great body of work, it is also written with harm. Because the NYCB was the head of American dance, this history bleeds into American dance today.

Although today we are moving towards workplace equality for women in other sectors, there is very little broad criticism of Balanchine or the New York City Ballet. With sexual and physical abuse coming to light more and more in the dance industry, the history of the Balanchine and The New York City Ballet further illuminates these dynamics’ origins. By surveying the company’s history, maybe the dance industry can start to separate what is otherwise a beautiful artform from the stain that is deep corruption. Like Balanchine’s groundbreaking choreography, perhaps company culture can move towards innovation, too.

The Soviet Union: How and Why Did it Fall?