HomeStories8 Groundbreaking Works of Art From the Ballets Russes 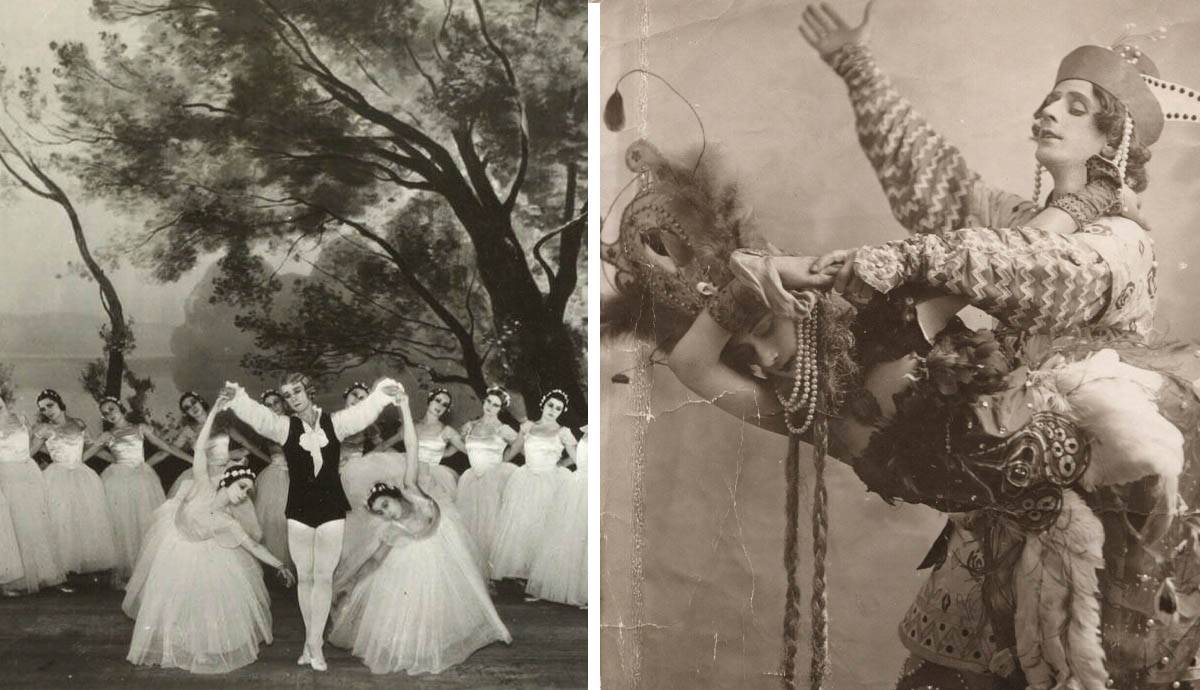 The Ballets Russes was a Russian company performing in Paris composed almost entirely of Russian-trained dancers, choreographers, and composers. As a result, the artists brought Russian folklore and folk dance to Western ballet. In addition to their cultural background, they brought contemporary art movements such as Cubism, as well as stunning collaborations and a vast array of choreographic styles to the ballet stage. Under their influence, ballet was no longer stagnant; rather, it was explosive.

From 1909 to 1929, the Ballets Russes brought incredible theater spectacles to the world. Over 100 years later, many of these spectacles are still performed and reworked by choreographers large and small. Here are 8 of their most groundbreaking works.

Les Sylphides, a work by Michel Fokine, was one of the first productions from the Ballets Russes. Shorter and more abstract than the traditional multi-act narrative ballets, Les Sylphides was the first ballet to be plotless and last only one act. The ballet references earlier traditions, reflecting Romantic-Era costuming, dance styles, and themes. Though it does call back to traditional ballet, it was also experimental; primarily, it paved the way for abstraction in dance.

Not to be confused with La Sylphide, Les Sylphides forever changed the art form. The ballet’s plot revolves around a poet enjoying a romantic evening with a group of nymphs, or “sylphs.” The tone of the ballet is rather atmospheric, reflecting a romantic mood rather than a linear plot. Set to music by Chopin, the ballet is remembered as one of the most foundational works of the 20th century. Today, the ballet is still frequently performed by top ballet companies.

A work by Nijinsky, Afternoon of a Faun is one of the more controversial pieces from The Ballets Russes. Set to the symphonic poem Prélude à l’après-midi d’un faune (Prelude to the Afternoon of a Faun) by Claude Debussy, the ballet focuses on male sensuality through the lens of mythology.

In the original ballet, the faun, a mythological creature similar to the centaur, watches the ethereal nymphs in a forest. Once the nymphs discover the faun, they flee. However, one of the nymphs leaves a scarf behind. At the end of the 10-minute ballet, the male faun mounts the scarf and mimics an orgasm. Because explicit depictions of sexuality weren’t accepted at the time, the ballet was naturally the center of quite a lot of controversy. Unlike the infamous Rite of Spring, though, the work’s initial reception was more evenly split. Some thought the work was bestial and vulgar, while some found it a clever treasure.

Much like Nijinsky’s Rite of Spring, Afternoon of a Faun has stood the test of time. Since the original premiere, many have reimagined the work, including the notable American choreographer Jerome Robbins. Most importantly, the work itself fundamentally renovated dance by adding new choreographic movements to ballet repertoire, centering the male experience, and further solidifying abstraction in the dance canon.

Fokine’s The Firebird is arguably the most well-known work from the Ballets Russes. Set to music by Stravinsky, the ballet is based on the Russian folk tale of the firebird. In the tale, the prince defeats the evil Kastchei with the help of the firebird. Kastchei has the kingdom under a spell, including the 13 princesses, one of which Prince Ivan is in love with. Once the Firebird grants Prince Ivan a magical feather, he is able to rescue the princesses and break the spell.

One of the first works to come from the Ballets Russes, this ballet would forever change the history of art, dance, and music. The Firebird was Stravinsky’s first wide success as a composer and is often considered one of the first modern music compositions. Forever solidifying their names in the canon of modern art, Stravinsky and The Ballets Russes received overnight international fame and recognition upon the premiere.

Not only did The Firebird bring fresh folk tales to The West, but it brought innovative music, new narrative tools, and brilliant choreography. Choreographically, each character had their own distinct style of costuming, movement, and performance, with only one character en pointe. This brought a new strategy to characterization in ballet and thus revitalized the storytelling aspect of ballet theater. Although Fokine created many abstract ballets, he also restructured and embellished ballet narratives through works like The Firebird.

Rather the opposite of Les Sylphides is Rite of Spring. The Rite of Spring, choreographed by Vaslav Nijinsky, is one of the most seminal works from The Ballets Russes, although it was desperately hated at the time of its premiere.

Inspired by pagan traditions in Russia, the piece depicts human sacrifice; essentially, a young woman is chosen to dance herself to death during a spring ritual. Set to a tumultuous score by Igor Stravinsky, The Rite of Spring shattered expectations of what ballet should be. When it was presented, Paris audiences hissed in response. In fact, the shocking ballet caused a riot, with many condemning the piece as a worthless display.

At the time, the audiences didn’t understand the angular movement, the jarring score, or the pagan costuming and themes. However, The Rite of Spring has since enjoyed quite a lot of popularity; choreographers have reworked the piece over 200 times, including a legendary version by Pina Bausch. In many ways, The Rite of Spring paved the way for modern dance theater, although many didn’t know it at the time.

Parade, a collaboration between several prolific artists, truly set the stage for Cubism and other art forms in dance. Created with incredible sets from Pablo Picasso, a plot from Jean Cocteau, and an inventive score from Erik Satie, Parade is the ballet’s most infamous artistic collaboration.

The original program, with a note written from Jean Cocteau, reads:

“The scene represents a Sunday Fair in Paris. There is a traveling Theatre, and three Music Hall turns are employed as Parade. There is the Chinese Conjuror, an American girl, and a pair of Acrobats. Three Managers are occupied in advertising the show. They tell each other that the crowd in front is confusing the outside performance with the show which is about to take place within, and they try, in their crudest fashion, to induce the public to come and see the entertainment within but the crowd remained unconvinced… the Managers make another effort, but the Theater remains empty. ”

According to popular interpretations, the ballet is about how industrial life conflicts with creativity and play. The backdrop, a gray cityscape created by Picasso, contrasts the brightly costumed circus performers, who try to pull the audience in from the gray city.

While Parade is remembered for its collaborative background, it also brought new choreographic ideas to ballet. Massine combined acrobatic elements and pedestrian movements with more traditional ballet steps, again expanding the genre’s vocabulary. In addition, the ballet addressed very real social dilemmas happening at the time and was one of the first ballets that didn’t center on the past. A product of modern art, Parade brought the present moment to the ballet stage.

Bronislava Nijinska, the sister of Vaslav Nijinsky, was the only female choreographer in the history of the Ballets Russes. In modern scholarship, she is considered an early feminist. As a vital choreographer and often misremembered leader in the ballet canon, Nijinska created many revolutionary works focused on the changing gender roles in the 1920s. Les Noces, which deconstructs the romance of marriage, is often considered her most important work.

Les Noces is a one-act ballet that focuses on marriage, specifically as it impacts the emotional world and societal roles of women. The plot follows a young woman through her wedding, a stark event portrayed as a loss of freedom. Set to an original score by Stravinsky, the ballet’s dissonant music reflected the mood of the work, utilizing multiple pianos and a chanting choir rather than a harmonious orchestra.

In part, the choreography is pulled from Russian and Polish folk dance steps. Today, the work is still performed, keeping faithful to Nijinska’s original themes. The work, often misremembered, made space for women in choreography while furthering the different dance techniques of the Ballets Russes.

Apollo marked the beginning of Neoclassical dance. Adhering to Neoclassical principles, the ballet focuses on classical themes like Greco-Roman mythology. Telling the story of a young Apollo, the ballet is a one-act work wherein three of the nine muses visit the young god. The first muse is Calliope, goddess of poetry; the second muse is Polyhymnia, goddess of mime; and the third and last muse is Terpsichore, the goddess of music and dance.

Apollo would generate international stardom for Balanchine, mark the beginning of Balanchine’s Neoclassical style, and see him establish a lifelong partnership with Stravinsky. In addition, the ballet also symbolized a return to older ballet traditions, which the Ballets Russes had a history of rejecting and disrupting. Balanchine’s work called back to the choreographer Marius Petipa while adding his own original style–like syncopated pointe-work and oddly-shaped lifts.

8. Prodigal Son, George Balanchine (1929): The End of the Ballets Russes

Prodigal Son, like Apollo, harkens back to classical themes. Opening the final season of The Ballets Russes, the ballet would also be one of its last productions. Sometime after this performance, Balanchine would move to America to found the New York City Ballet, bringing the work with him.

Derived from the “Parable of the Lost Son” from the Bible, the plot tells the tale of a son who leaves home to explore the indulgences of the world. In the ballet, the son eventually comes home to his father, devastated by the world and apologetic. Paralleling the forgiveness God grants humanity, the father accepts his son with open arms. Consequently, the ballet follows the redemption arc of the son and explores the concepts of betrayal, sorrow, and unconditional love.

The ballet was praised for its timeless message and innovative, expressive choreography. Compared with other themes in the ballet genre, the themes brought by Prodigal Son portrayed a vast array of complex drama while remaining universally accessible to many audiences. Today, it is still performed far and wide, mainly by Balanchine’s New York City Ballet.

As the last production of The Ballets Russes, perhaps Prodigal Son forever solidified the ballet’s place in history. From start to finish, the Ballet brought incredible works and genre-defying theatrics to the world of dance, and Prodigal Son was an ideal closer. From Firebird to Prodigal Son, The Ballets Russes is remembered for a revolution; and that revolution that would carry itself all the way to New York on Balanchine’s back.

9 Facts About The Centaurs Of Greek Mythology