HomeArtists10 Things You Need to Know About Matthias Grünewald

10 Things You Need to Know About Matthias Grünewald

One of the most unique painters of his time, Matthias Grünewald rejected Renaissance trends for his own style. Read on to learn more. 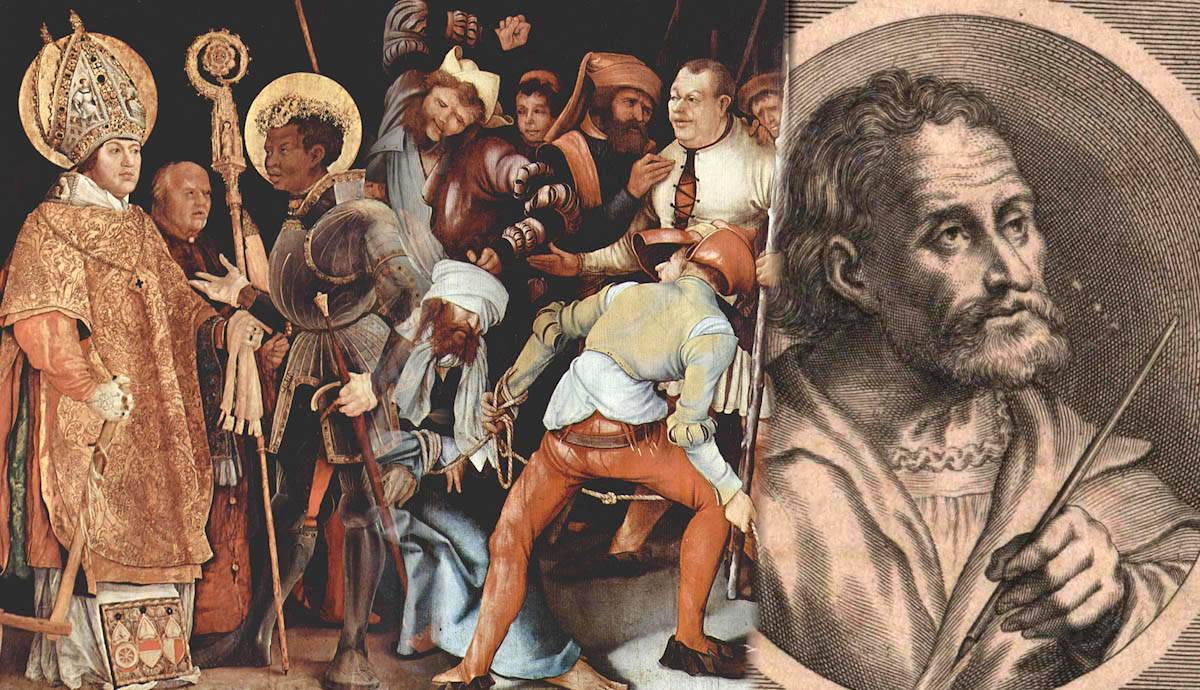 Born around the year 1470, Matthias Grünewald distinguished himself from his contemporaries by producing masterpieces resembling the medieval art of Central Europe, rather than the more fashionable Classicism that prevailed during the Renaissance. Read on to find out everything you need to know about this important painter and his fascinating artworks, and how he developed his unique style.

10. The Facts About Matthias Grünewald’s Life Are Hazy

Scholars have been unable to pin down Matthias Grunewald’s date or place of birth because municipal records were not well kept in 15th century Germany. Even more remarkably, we’re not even sure of his name! Various sources record his surname as either Gothart or Neithardt, but he is commonly known as Grünewald, a moniker mistakenly given to him by his 17th-century biographer, Joachim von Sandrart.

It is thanks to Sandrart that any information about Grünewald’s early career has been preserved. Gathering material from a wide variety of documents and sources, Sandrart formed a rough chronology for the artist’s youth, which saw him working in Frankfurt as an apprentice. As part of his training, Sandrart records that Grünewald worked as an assistant to Albrecht Dürer. He helped Dürer complete the exterior decoration of one of his magnificent altarpieces. He then went on to establish himself as an independent master with both a woodcarving workshop and painting studio. Again, the exact location of Grünewald’s premises is not known.

9. The Evidence is Further Complicated by the Loss of Grünewald’s Paintings

Although he was a prolific artist in his time, much of Matthias Grünewald’s work has been sadly lost or destroyed over the centuries. We now know about just ten of his paintings. Many of his masterpieces met their fate at sea as they were transported between countries, or fell as casualties of war. It is fortunate that his magnum opus, the Isenheim Altarpiece, escaped such a fate. During the Franco-Prussian conflicts of the 19th century, the work passed continually between hands as each state tried to claim it as part of their own cultural heritage. Luckily, both sides respected the value of the huge altarpiece, so it sustained no significant damage during this time.

Although most of his paintings no longer exist, we do have 35 drawings by Matthias Grünewald, all of which focus on religious subject matters. These devotional sketches can help to provide insight into the methods used by the artist, his interests, and the demands of the art market.

Even though certain prominent pieces, such as the Isenheim Altarpiece, endured as symbols of artist excellence, Matthias Grünewald slipped into obscurity after his death in 1528. With the Renaissance at its peak, Grünewald’s style was not in vogue and his reputation suffered accordingly. During the following centuries, much of his artwork was left unacknowledged, mistakenly attributed to other painters, and even heavily criticized.

7. Grünewald Was Somewhat Eclipsed by One of His Contemporaries

One of the artists who has historically been credited with much of Grünewald’s work is Albrecht Dürer, perhaps the most important German artist of the Renaissance. Dürer achieved fame during his youth as an exemplary engraver, talented painter, and unique portraitist. As evidenced by Sandrart, Grünewald may have worked for Dürer early on in his career, and ever since, the two artists have often been studied and considered in light of one another.

Even contemporary critics compare their work, and within the same century, there was already confusion about which artist was responsible for which artwork. Holy Roman Emperor Rudolph II, for instance, attempted to buy Grünewald’s Isenheim Altarpiece in the belief that the masterpiece was painted by Dürer, whose work he passionately collected.

All the confusion about Grünewald and Dürer is, in itself, well… confusing. The two artists developed their own styles which were in some ways diametrically opposed to one another. While Dürer embraced aspects of Renaissance Classicism, Grünewald steered clear of any Italian influences, preferring to develop the style of late medieval painting.

Grünewald’s style came to be characterized by his strong use of line and color, which gave each piece a dramatic, intense, and expressive effect. Although in many ways just as hauntingly realistic as the work of the Italian masters, Grünewald’s paintings convey little of the harmony, serenity, or idealized beauty generally prized in Renaissance art. Specializing in devotional art, Grünewald was determined to capture the suffering and torments of earthly life, as well as the transcendent and otherworldly nature of the divine. He therefore employed techniques of contrast in color and form to evoke these ideas.

Towards the end of the 19th century, Matthias Grünewald’s brilliance was rediscovered by various followers of the Expressionist and Modernist movements. His rejection of Classicism, sympathy for the lower classes, and German heritage also made him the perfect ideological symbol for the German Nationalists, who adopted Grünewald as something of a cult figure. Through this bizarre route, Grünewald again came to be appreciated as an influential and historically significant artist.

In the following decades, a number of homages to Grünewald’s career emerged in the form of operas, poems, and novels. His magnificent devotional works also earned Grünewald a place in the ecclesiastical calendar. The Lutheran and Episcopal Churches commemorate the artist in early April each year, along with Albrecht Dürer and Lucas Cranach.

All of Grünewald’s surviving work is devotional, meaning that it has religious subject matter. At the time, it was not unusual for the majority of an artist’s oeuvre to be made up of such work because the church was one of the most powerful, and richest institutions in Europe. It was able to commission and safeguard the most magnificent pieces of artwork from the very best artists of the day.

Along with sketches of saints and drawings of disciples, Matthias Grünewald painted many images of Christ himself, often focusing on the crucifixion. Grünewald refused to romanticize or sanitize his suffering, leaving little to the imagination. Instead of the heavenly, glowing portrayals often found in the Italian corpus, Grünewald’s tortured figures and dark palette give full force to feelings of pain, hopelessness, and grief.

3. Grünewald’s Most Famous Masterpiece Is The Isenheim Altarpiece

Prized as Matthias Grünewald’s greatest masterpiece, the Isenheim Altarpiece took four years to complete. Painted for the Monastery of St Anthony in Isenheim, the huge panels depict the crucifixion of Christ. Jesus is surrounded by several followers and his anguished mother, vividly clothed in a bright white robe. Although John the Baptist was certainly not present at the crucifixion, Grünewald chooses to present him here with a small lamb, a symbol of sacrifice.

St Anthony was associated with ergotism, the affliction then known as St Anthony’s Fire. His followers dedicated themselves to helping the sick. During Grünewald’s day, the Isenheim monks were caring for sufferers of the plague, which may have inspired the large and gruesome sores which mark the body of Jesus. Grünewald’s visceral portrayal of Christ’s suffering was unusual in European art but was effective in showing worshippers that, like them, even the son of God experienced suffering.

2. The Altarpiece Was an Innovative Masterpiece

Not only are the paintings in the Isenheim Altarpiece deeply moving and profound, but the various panels are constructed as part of an innovative and complex design. Rather than the many small panels typically found in Renaissance altarpieces, Grünewald produced several enormous panels that could be maneuvered to create different views.

The altarpiece can be configured in three ways: the most famous view, formed by closing the wings, shows the crucifixion scene; another view appears when the wings are opened and depicts scenes from the Gospels, including the Annunciation and the Resurrection; the final view is formed when all the panels are fully opened to reveal sculptures of Jesus, the apostles and numerous saints by Niclaus of Haguenau, flanked by paintings of St Anthony.

The elaborate construction of the Isenheim Altarpiece meant that it could be altered to suit the occasions of the church calendar. During festivals in honor of the Virgin Mary, for instance, the wings would be opened to show the Annunciation and Nativity scenes. The highly versatile and striking masterpiece thus won its place in the canon of Renaissance art.

Matthias Grünewald married and settled down in Frankfurt, but his private life was far from happy. His wife was eventually admitted to an asylum for “demonic possession.” Grünewald himself seems to have suffered from depression. The situation did not improve when the artist fell into poverty, having left Isenheim before getting paid for his magnificent altarpiece. Although sources vary, it is generally thought that Grünewald died poor and lonely in Frankfurt, leaving behind no family, school, or workshop.

Although his name was largely forgotten in the aftermath of his death, Grünewald eventually rose to prominence again and is now recognized as one of Germany’s most significant Renaissance artists. Deliberately forging his own path and rejecting contemporary trends, Grünewald produced paintings that astonished, inspired and haunted viewers.