Medieval bestiaries are illuminated manuscripts filled with real and mythical beasts. Read along to learn more about their legends. 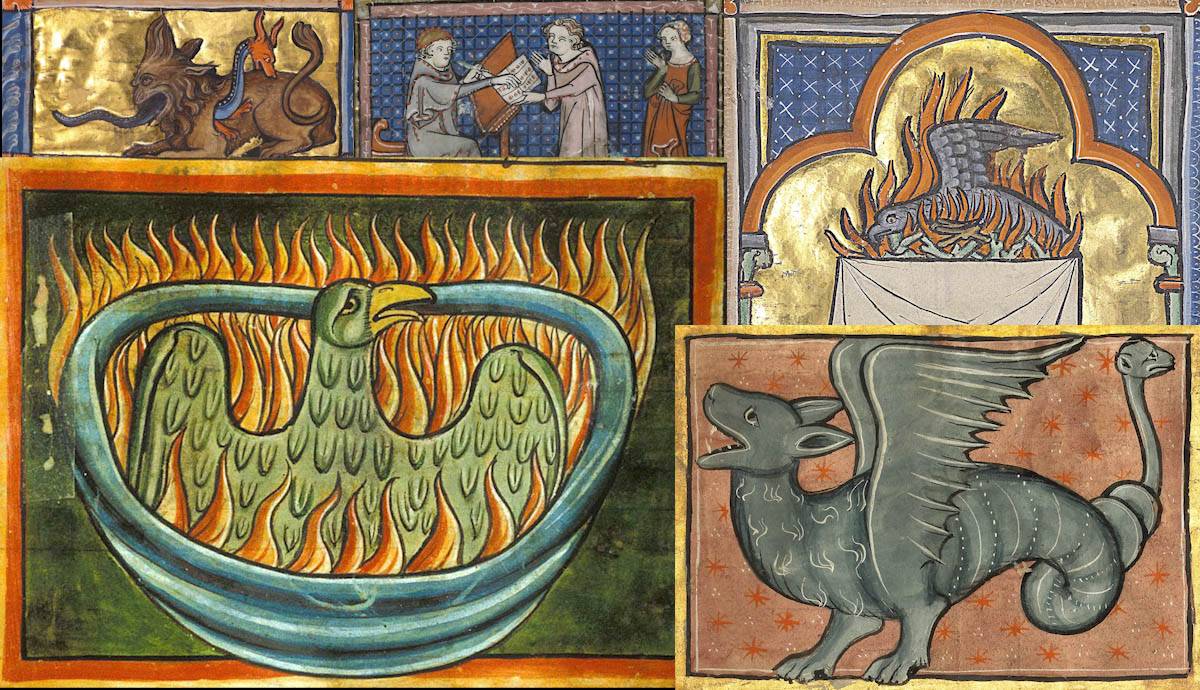 Medieval bestiary has recently become a subject of fascination among scholars, who have taken a collaborative, multidisciplinary approach. Previously thought of as an anecdotal subject, animal studies have been neglected in the past. But during the last several decades, thanks to the combined work of historians, zoologists, anthropologists, ethnologists, and linguists, animal studies have begun to thrive.

Medievalists have played a key role in this investigation by studying a major source of information for animal studies, the medieval bestiary. Medieval iconography used animals and mythical beasts in abundance. They are found in numerous media such as seals, coats of arms, sculptures, architectural elements, and illustrations. Beasts spread across church interior walls, stained-glass, and bas-reliefs served as a teaching device for the illiterates in medieval society. They were also used in medieval songs, proverbs, and even as swear words!

Beasts became prominent allegorical figures in the Middle Ages. Studying animals in medieval iconography allows us to understand the connections between the animal world, men, women, and society in general.

The Origins of The Medieval Bestiary

Bestiaries are written sources that help us to understand the popular animal stories that were spread throughout Europe during the Middle Ages. The medieval bestiary was a type of illuminated manuscript, composed of descriptions and illustrations showing real and imaginary beasts inspired by Christian morals and allegories.

At the time, the primary source of information regarding animals was the Physiologus, a Christian manuscript written in Greek by an unknown author in Alexandria, probably during the second century CE. This text was possibly translated into Latin during the 4th century. The Physiologus gave descriptions of nearly fifty beasts. Throughout, the author described the appearance and behaviors of these animals, but the moral discourse associated with them was inspired by the Bible. This predecessor of the bestiaries was translated and copied numerous times, thus influencing animal knowledge and symbolism for over a thousand years.

Based on the Physiologus, early bestiaries served as educational tools to convey simple Christian morals. People could relate to the beasts’ personalities and their feelings. The first bestiaries appeared in England during the 12th century. But only wealthy aristocrats had the privilege to possess such precious manuscripts. Later, bestiaries spread to Northern France, in Latin for clergymen, and in French for laymen. The literary tradition evolved, and authors created philosophical bestiaries or bestiaries inspired by courtesy literature.

The bestiary written by the Anglo-Norman poet Philip de Thaon from 1121 to1135, is the oldest in French. Philip de Thaon translated the Physiologus into old French, the earliest surviving transcription in this language. He described more than thirty beasts and a few precious stones.

1245 marked the end of medieval bestiary tradition with the publication of the parodistic Bestiaire d’Amour written by French philosopher and trouvère Richard de Fournival. Son of a physician, Richard de Fournival followed in his father’s footsteps as a doctor, but he was also the chancellor of the cathedral chapter of Notre-Dame d’Amiens in France.

The Lion: The King Of The Medieval Bestiary

As surprising as it may seem, lions were not that exotic for medieval Western Europe. Sure, people rarely encountered lions in their everyday life, but they could be seen in royal menageries, a king’s collection of mostly exotic captive animals. Artists frequently depicted the animal in church paintings or sculptures. The lion was the king of all the animals, the main character of the medieval bestiary. It was associated with several mighty personalities, the most famous of them being Richard the Lionheart, King of England.

Lions have always been a symbol of power and courage, but also wisdom and justice. During antiquity, the lion became a royal emblem. With the emergence of Christianity, the animal also became associated with the figure of Christ. The animal sometimes wears a crown or a halo around its head.

During the Middle Ages, a legend spread about the birth of the king of the animals. The birth of lion cubs supposedly only happened three days after their physical birth, when their progenitor passed on its vital breath. The legend was associated with the resurrection of Christ, the reason why there are often sculpted lions at the feet of medieval recumbent effigies. Another tale from the medieval tradition recounts the lion’s ability to sleep with its eyes open, making it a guardian of choice. Sculpted lions often guard the entrances to rooms and churches.

Curiously, the lion was not just a symbol of royalty or Christ, it also symbolized Satan or the Antichrist. In these cases, artists depicted its darker side, a ferocious and tyrannical beast. In the Old Testament, Samson defeated a lion bare-handed, just like Christ overthrowing Satan. From the 12th century onward, the lion as a positive symbol gradually supplanted its darker form. For example, the winged Lion of Saint Mark became the emblem of the Venetian Republic and, in a broader sense, a symbol of the Christian faith.

In medieval belief, the dragon was not a mythical creature but a real one. In Western tradition, dragons are forces of evil or guardians of treasure. The mighty animal was supposed to belong to the snake family. In the Latin language, “draco” means both snake and dragon. It has hard skin that can only be pierced by the weapons of heroes. The tongue of fire that bursts from its mouth keeps even the bravest of men at bay.

Dragons already existed in Celtic and Asian traditions. Early Christians integrated the fierce beast into their culture. Originally, dragons were neither good nor bad creatures. Yet, in the Bible, the dragon and the Leviathan are the same beast. The Leviathan embodied evil forces and Satan himself. This representation of the dragon overtook all others in the Western World. The only men capable of defeating the dragon became famous for their achievements, such as Saint George and Saint Michael.

Another mythical beast abundantly represented in the medieval bestiary is the unicorn. The Roman naturalist and philosopher Pliny the Elder described the imaginary animal in his Natural History, first published in 77 CE. He based his description on old knowledge, speaking of a “licorne” or “monoceros;” a ferocious animal, impossible to capture alive, with the body of a horse, a stag head, elephant feet, and a boar tail. A description far from the sweet and pure legendary animal we picture today!

Unicorns also appear in the Bible. They are portrayed as violent and evil creatures; demons plotting against men. The current, positive image of the unicorn came later, around the 12th century. French author Pierre de Beauvais described the method to capture the unicorn, probably based on the Physiologus, in his medieval bestiary written sometime around 1218. The small animal, similar to a young goat, has a long horn in the middle of its forehead. The unicorn is so ferocious that no man can capture it unless they use the following method: the huntsman leads a virgin girl into the middle of the woods, where the unicorn lives, and leaves her sitting there alone. When the unicorn comes, driven by the maiden’s odor of chastity, it rests its head on her lap and falls asleep. The huntsman is then able to capture the animal alive.

Unicorns as Symbols of Purity

The unicorn trapping scene was interpreted through the lens of the Christian faith; the Virgin, and Jesus Christ were embodied by the animal. Its flesh was sometimes pierced by a spear, recalling the Passion of Jesus. Unicorns were then portrayed as we picture them today: small white horses with a long single twisted horn on their forehead. They became a symbol of purity and were hunted for the supposedly healing and purifying powers of their horns. In reality, the booming medieval trade in narwhal horns sold as unicorn horns, strengthened the legend.

This eagle-like bird with red wings was the ultimate symbol of rebirth and immortality. Already present in ancient tradition (and more recently evoked in the Harry Potter saga) medieval people saw the phoenix as a metaphor for Christ’s resurrection.

Pliny the Elder was the first to give a detailed description of the Egyptian legend of the phoenix in his Natural History. The myth came from the sacred bird, the “Bennu,” an Egyptian deity capable of self-creation.

People believed phoenixes could live up to 500 years old. A version of the legend stated that when the animal became too old, it built a pyre of wood and myrrh and rested on it until it caught fire. Three days later, just like Jesus Christ, the phoenix was reborn from the ashes. The allegory of the phoenix reminded people of the hope for redemption after they had sinned.

The bestiary should not be considered proof that the Middle Ages was a time of ignorance. Instead, it is a precious source of information regarding medieval beliefs. We should also bear in mind that the use of beasts as characters was an effective way to share ideas, values, and knowledge with a population that was mostly illiterate.

During the Middle Ages, observation was not the only way to access truth. Allegories and beast symbolism were important. The imaginary was not opposed to reality; imaginary beasts were as real to them as living animals. Their knowledge came from renowned old authors and the Bible. Only centuries later did people call into question the existence of certain mythical beasts.

It is pointless to try to identify each of the strange beasts described in the bestiaries or to point out each truth or falsehood. Instead, bestiaries should represent remarkable tools to study the lives of medieval men and women, and how they comprehended their world.

10 Reasons The Ancient City Of Alexandria Was An Intellectual Powerhouse

10 Reasons The Ancient City Of Alexandria Was An Intellectual Powerhouse