HomeAnswersWhat Are Christo and Jeanne-Claude’s Most Adventurous Artworks?

What Are Christo and Jeanne-Claude’s Most Adventurous Artworks? 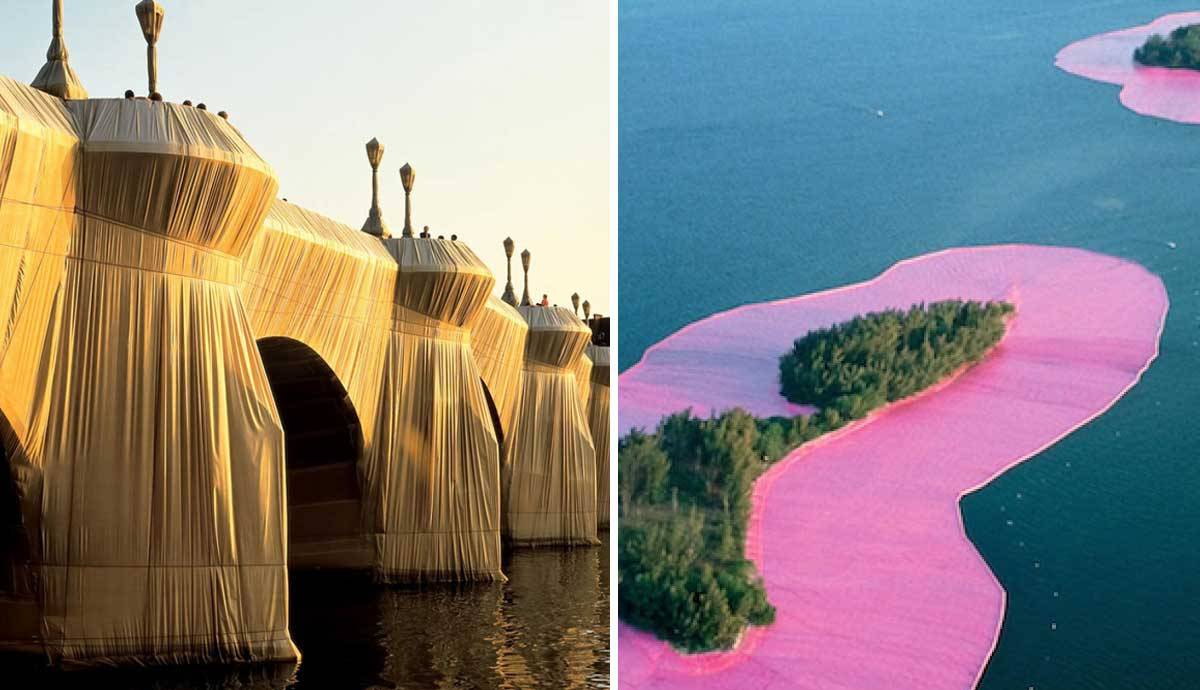 The husband-and-wife duo Christo Vladimirov Javacheff and Jeanne-Claude Denat de Guillebon – better known as ‘Christo and Jeanne-Claude’ – made vastly ambitious public artworks that dramatically altered landscapes, urban parks and architecture. Such was the scale of their ventures they sometimes took up to a decade to fully realize. Throughout the 1970s and 1980s Christo and Jeanne-Claude earned an international following for their monumental, wrapped interventions. These involved smothering buildings, valleys, and even entire islands with great swathes of colorful fabric. They also produced colorful stacked monuments from recycled ephemera. We look through some of their finest contributions to the field of public art.

On the evening of June 27, 1962, Christo and Jeanne-Claude filled up the Rue Visconti with a huge stack of 89 oil barrels. In doing so, they created a wall that blocked access through the Paris Left Bank, causing significant disruption. This artwork was one of their most political, a protest against the construction of the Berlin Wall just a year earlier. They called it an ‘iron curtain’ and left the natural rust and colored patinas of the oil barrels fully visible.

Valley Curtain took the artists 28 months to complete, given the incredible scale of the venture. Christo and Jeanne-Claude suspended a bright orange expanse of woven nylon fabric in the deep valley between Grand Junction and Glenwood Springs in the Grand Hogback Mountain range. It took a team of 35 construction workers, and 64 volunteers including art students and itinerant art workers to secure the vast piece of flapping cloth in place. The end result was nothing short of spectacular, dazzling with brilliant color amongst the rugged and rocky terrain.

As their reputation grew, the scope of Christo and Jeanne-Claude’s installations became increasingly ambitious. This increasing confidence can be seen in the minimalist Running Fence, a vast stretch of white fabric tacked along the ground, 5.5 meters high and 39.4 km (24.5 miles) long. It ran all along an expanse of private land across Sonoma and Marin Counties in California.

Following the success of their environmental interventions, Christo and Jeanne-Claude began embarking on a series of wrapped buildings and architectural landmarks. To create them, they used woven polyamide fabric with a silky finish. The Pont Neuf Wrapped completely transformed the Parisian bridge. This intervention turned it into a deeply tactile, sculptural work of art. It was in place for 14 days, before the wrapping was removed and the public could see the structure again.

Christo and Jeanne-Claude completed the outdoor intervention Surrounded Islands in Biscayne Bay, Greater Miami, Florida. In their most challenging and ambitious artwork yet, they created a hot pink halo of color around the area’s 11 islands. They used woven polypropylene fabric and left it in place for a full two weeks. The luminous pink of the fabric formed a dramatic, theatrical contrast with the lush greenery and aqua blue water of the area, creating a dazzling feast for the eyes.

In the public art intervention, The Umbrellas, Christo and Jeanne Claude took a different approach from their earlier ventures. Rather than focusing exclusively on one location, they worked in two corresponding areas simultaneously. In each, they installed a series of brightly colored umbrellas that lit up the landscape around it. 1340 blue umbrellas on posts were installed in Ibaraki in Japan. They corresponded with a series of 1740 yellow umbrellas in California. Opening both sites at the same time, but with corresponding colors, allowed the artists to draw comparisons between these two terrains that are so far away from one another.

Christo and Jeanne-Claude installed The Floating Piers at Lake Iseo in Italy. They were a series of floating, modular walkways covered in shimmering yellow fabric, which created a pathway from Sulzano to Monte Isola, and to the island of San Paolo. The installation remained in place for just 16 days. During this time the artists invited visitors to walk along the passageway and enjoy experiencing the surrounding land and water in an entirely new way.

What Is Land Art?