HomeArtA Portrait of Napoleon Bonaparte as a Work of Propaganda

The 19th century witnessed a rise of a new kind of self-promotion through art, pioneered by portraits of Napoleon Bonaparte. 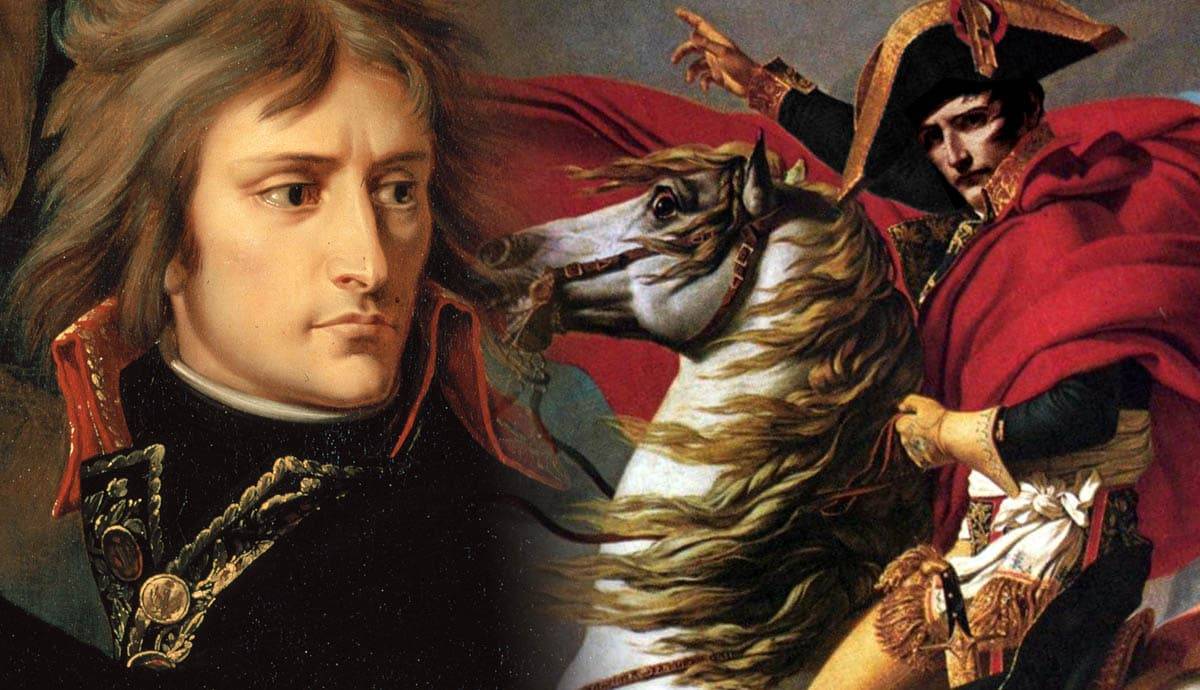 Portraits of Napoleon Bonaparte are various and numerous. His period of rule over France was marked by the almost industrial production of his portraits. The French state commissioned both painters and sculptors who made hundreds of images of Napoleon. Most of these portraits had a clear political and propagandistic role, if not all. The focus was on the personality of Napoleon and the legitimization of his own rule over France. Constant ascent, which implied a more significant role and significance inside the French society, demanded a corresponding visual presentation that would justify, strengthen, and maintain garnered political power. Below we will be examining a portrait of Napoleon Bonaparte that was the cornerstone of the legend he became.

A Portrait of Napoleon Bonaparte In Italy

The earliest monumental portraits commissioned by General Bonaparte were painted during his campaign in Italy. One such painting of Napoleon Bonaparte that stands as one of the most representative examples of Napoleon’s propaganda as general was done by Antoine Jean Gros. Titled Bonaparte at Pont d’Arcole, Gros finished the painting in 1797.

This portrait presents one of the foundations of the legend of Napoleon, the battle at Arcole and Napoleon leading the charge at enemy lines himself. Presenting Napoleon in action, charging at the enemy, this painting breaks from the conventional composition of portraits. According to military portrait tradition, the model is supposed to be in a standing position, looking at the viewer, with a distant battlefield in the background. Gros moves away from this tradition in order to manifest Napoleon’s heroic feat. With a flag in his left and a sword in his right hand, the general is heading towards the enemy but looking back at his own troops on the right. Napoleon runs in front of two conflicting sides but still manages to remain composed and without fear. The background remains a blur, unclear. The iconography of the painting returns our gaze to the face before us, which Gros elevates from every day to mythic reality.

Napoleon Bonaparte was born on the 15th August 1769 on the island of Corsica to a family of not very well-off aristocrats. At the age of fifteen, Napoleon was sent to the Royal Military Academy in Paris. At sixteen, he began his military career as a second lieutenant, training with the best artillery unit in the French army. After the beginning of the French Revolution, Napoleon would return to Corsica. Inspired by revolutionary ideals, he headed right into Corsican politics. Soon Napoleon became the leader of a faction that opposed the island’s governor Pasquale Paoli. Unfortunately for him, Paoli proved to be a vicious adversary. After defeating Napoleon, the Corsican Assembly would proclaim the whole Bonaparte family as traitors and banish them from the island.

Finding himself once again in mainland France, Napoleon pursued his military career. Achieving his first great victory at only twenty-four years of age by freeing the city of Toulon made him a hero of revolutionary France. Two years later, in 1795, young Bonaparte suppressed the rebellion of the national guardsmen and mobs in Paris. This feat would earn him the title of a general, Commander of the Army of Italy, at the age of twenty-six.

Failure as the Cornerstone of a Legend

From a historical point of view, the Battle of Arcole in 1796 was one of the toughest victories during the Italian campaign. French soldiers were demoralized because of low rations of food, lack of reinforcement, a more numerous Austrian army, and news of losses in other parts of Europe. Catching sight of the bridge, some of the French officers, supposedly Napoleon among them, decided to step up in front of their soldiers to encourage them to break through. The idea of storming through enemy lines was quickly abandoned, and Napoleon fell into a swamp during an Austrian counter-attack. After being extracted from mud by his officers, Napoleon borrowed a horse and left to change his clothes. Despite its catastrophic results, this event will be made into the center of Napoleon’s personal propaganda.

There is an obvious distinction between the portrait of Napoleon Bonaparte and what really happened; the historical General retreating from battle disgraced. This points to Napoleon’s desire to represent himself as a leader whose soldiers are loyal and position himself among heroic commanders, both past and present. The self-promotion of Gros’s portrait of Napoleon Bonaparte wouldn’t be possible without the cultural and political changes that befell France before and during the Revolution.

The Tradition of the Ancien Régime

In the second half of the 18th century, France embraced the veneration of a canon of great men. The process of creating national heroes was initiated by the State itself, which commissioned numerous statues and paintings. This period marked a transition of public veneration, from saints and kings towards philosophers and generals, whose cults are associated with their personality and work.

This shift started the nationalization of history, in which anybody who did something great would earn public praise and glory. Praise and glory were presented in the likeness of monumental statues or busts on a public square. By the end of the century, both state and military leaders would be presented in a media reserved only for figures of the monarchy. The trend of democratization of visual presentation grew stronger after the fall of the French monarchy during the Revolution in 1792. Standardization of iconography enabled unknown individuals, ready to sacrifice themselves for their country, to become heroes of the Revolution. These individuals were martyrs of freedom, victims of enemies, both domestic and foreign, and part of the cult promoted by the state.

From Martyr to Military Hero

Martyrs cult prevailed in revolutionary iconography until the fall of Robespierre, receding of revolutionary zeal and mass mobilization. At that point, the cult of military heroes ascended and became the foundation for the portrait of Napoleon Bonaparte. During 1793 and 1794, the French press was flooded by anonymous figures of common soldiers rather than generals or commanders. Regardless of the trustworthiness of their stories, their function was to represent a common republican soldier, often fighting an overpowered and more numerous enemy to the death.

The heroism of a particular individual was omnipresent in the daily press, as a reward for those ready to give up their lives for their country and as an incentive for other citizens to act in the same manner. Gros’ portrait of Napoleon Bonaparte corresponded with these representations based on the idea of free men conquering any obstacle through sheer willpower.

A Mantle of Destiny and Myth

The portrait of Napoleon Bonaparte that Gros produced was laid on an already well-established iconography among the revolutionary elite, to whom this portrait was meant. In Gros’ painting, Napoleon, a general of the army in Italy, becomes an archetype of a common infantryman and a bearer of great courage. This kind of behavior was expected from all military ranks. He is a figure who carries the flag of the French Revolution bravely, inspiring and boosting morale among his fear-stricken but loyal soldiers.

An identical description of Napoleon can be found in a newspaper Napoleon himself published in Italy, the Courrier de l’Armee d’Italie. The same newspaper promoted the stories of common soldiers on the order of Napoleon himself. He wasn’t the first general who would self-promote and dramatize his role in the fight against the enemies of the Revolution. However, unlike other generals, Napoleon stood out by adding to his image a mantle of destiny and creating an aura of myth around his character.

The Reception of the Portrait

The painting was exhibited at the Paris Salon in 1801 but initially met little public approval. On the other hand, Napoleon himself received it with great enthusiasm and urged Gros to make an engraving that would be printed. Prints of this portrait of Napoleon Bonaparte were a huge success, and numerous editions and copies ensued. Bonaparte’s own interest in the engraving demonstrates his awareness of the power of the printed image as propaganda.

Another version of this portrait as an engraving was completed by Thomas Piroli. Though simpler, it was based on the original painting and also dedicated to l’Armee d’Italie. Through these prints, Napoleon reached far beyond the Paris Salon public. This portrait of Napoleon Bonaparte could reach all of Europe, and more importantly, his own Army of Italy. Thanks to this commission, general Bonaparte appointed Antoine-Jean Gros to serve on the Commission des arts, formed to select and transport significant artworks from Italy back to France.

Through this one example of a portrait of Napoleon Bonaparte, one could see how visual representation develops in close relation to political ambitions. Concentrated on the personality of the portrayed, artists like Gros and Jacques-Louis David had to channel ideas propagated by Napoleon in other media onto their works. Basing their work on traditional formulas of artistic expression and contemporary political, cultural, and social developments, they created an array of dramatic representations. Consequently, in the perception and imagination of the French society, these representations lifted Napoleon Bonaparte to a degree of a mythical hero.

After laying a foundation with this portrait, Napoleon continued forming, retaining, and controlling his own perception among the French during his campaigns. Visual material produced during this period, as well as newspaper articles and proclamations of Napoleon himself, inform us not only of his military but also of his political and personal campaign.