Rebellion is at the heart of Niki de Saint Phalle’s practice. Rising to prominence in post-war Paris, she grabbed the art world’s attention with her ‘Tirs’, or ‘Shot’ paintings, made by firing a loaded gun at bags of paint on canvas. 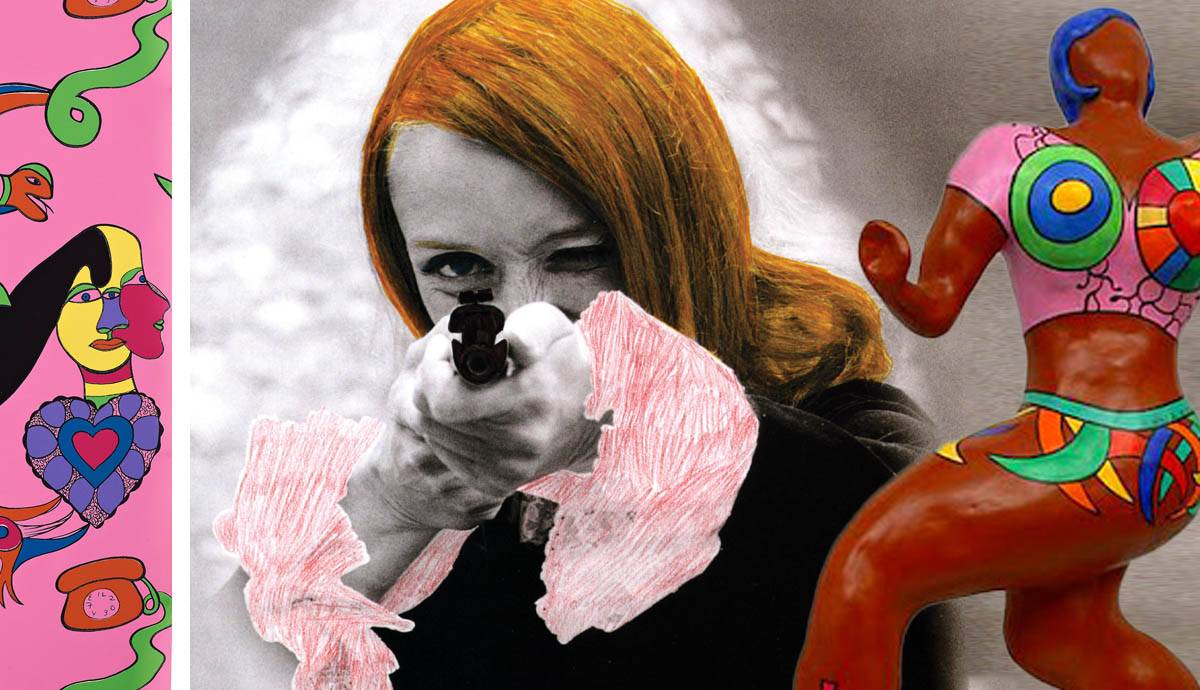 Rebellion is at the heart of Niki de Saint Phalle’s practice. Rising to prominence in post-war Paris, she grabbed the art world’s attention with her ‘Tirs’, or ‘Shot’ paintings, made by firing a loaded gun at bags of paint on canvas.

Throughout the 1960s, her larger than life Nanas made her world famous; buxom, curvaceous and outrageously decorated, they celebrated unbridled femininity as the women’s rights movement was rising, and are just as relevant today as the battle rages on, making them timeless symbols of liberty and self-expression.

Saint Phalle was born in Neuilly-sur-Seine, France in 1930. With an American mother and a French father, she was raised as bilingual. In 1933, the artist’s father lost his job during the Great Depression and the family moved to the United States for a new start.

There Saint Phalle was sent to the strict Brearley Convent School in New York City; while she credited the school’s inspiring teaching for helping her become a feminist, she was a rebellious young student and was eventually expelled for painting the fig leaves on the school’s statues bright red.

Later in life, Saint Phalle revealed that her father had sexually abused her when she was just 11 years old, destroying her innocence and leading her to develop recurring mental health issues.

When she was just 17, Saint Phalle’s striking looks were spotted by a modelling scout in New York. She went on to pose for the city’s most prestigious magazines by the likes of fashion photographer Horst P. Horst, she was featured on the covers of Vogue, Elle, and Life. A year later she eloped with writer Henry Matthews and had a daughter.

The young family moved to Paris in 1952, where Saint Phalle studied theatre, but a year later she had a severe nervous breakdown and was admitted to a psychiatric hospital for treatment. While recovering, she discovered the healing power of making art, writing, “It was through creation that I discovered the sombre depths of depression, and how to overcome it.”

Following her recovery, Saint Phalle moved with her husband and daughter to Mallorca, where she had her son in 1955. She continued to paint, and was particularly influenced by the vivid colours and bold patterns of Spanish art, particularly the architectural creations of Antonio Gaudi.

In the late 1950s Saint Phalle and Mathews returned to Paris with their children, but the pair separated in 1960. Just a year later, Saint Phalle launched her ‘Tirs’, or ‘Shots’ paintings in Paris, combining performance with expressive paint as she fired bullets at paint bags attached to canvases. The act of shooting became a potent symbol of rebellion as Saint Phalle shot out against her father, the constraints of domesticity and patriarchal society.

In Paris Saint Phalle met and fell in love with fellow artist Jean Tinguely, and both became leading members of Paris’ Nouveau Realistes group. From the mid-1960s, the pair moved to an old house outside Paris, where Saint Phalle developed her signature Nanas series, archetypal, voluptuously curved bodies decorated with vivid, Matisse-like colours.

On the one hand they seem to be symbols of joy and freedom as they jump and leap towards us, but the term ‘Nana’ is lifted from the derogative French slang for ‘chick’ or ‘dame’, making a nod towards the inherent sexism at play all around her, and women’s strength in breaking free from it.

In her mature career Saint Phalle became a committed campaigner against racial segregation, social injustice, AIDS and women’s rights. Saint Phalle also attempted to exorcise the demons of her past with her film Daddy, 1972, a reversal of power in which she ridicules and attacks a father figure, preceding her expose autobiography Mon Secret, 1994, which laid out the horrors of her past.

A large part of Saint Phalle’s late career was dedicated to the construction of Le Jardin des Tarots (Tarot Garden) in Tuscany, a huge garden filled with 22 vibrant sculptures, which took nearly 20 years to complete. “I’m following a course that was chosen for me,” she wrote, “following a pressing need to show that a woman can work on a monumental scale.” After Tinguely’s death in 1991, Saint Phalle moved to La Jolla in California, where she spent the remainder of her life until her death in 2002.

Much of Saint Phalle’s most famous art was made for public art sites all around the world, but works that do appear at auction sell for hundreds of thousands and millions. These include:

More recently, in 2015 Nana Danseuse Noire (Grande Danseuse Negresse) sold for a whopping $1,077,250, proving the enduring popularity of her art.

This major sculpture sold at Sotheby’s New York in 2006 for the costly sum of $1,136,000, making it Saint Phalle’s most expensive sculpture.

Snakes were a recurring theme in Saint Phalle’s art, a symbolic reference to her father, who sexually assaulted her at a young age.

Saint Phalle collaborated on a series of projects with her future husband Jean Tinguely, including the Stravinsky Fountain in 1983, near the Pompidou Centre in Paris, which sprays water in rhythmic patterns in homage to the composer Igor Stravinsky.

The first Nana sculptures Saint Phalle produced were inspired by the blooming shape of her pregnant friend Clarice Rivers.

Collaboration was an important strand of Saint Phalle’s art; in 1961 she worked with Salvador Dali to produce a huge bull figure, which was wheeled out in front of an audience after a national bullfight in Catalonia before exploding with fireworks and paint powders.

In 1966, Saint Phalle caused shock when she displayed her Hon-en katedral (She-A Cathedral) at Stockholm’s Moderna Museet, a vast temple sized Nana, 28 metres long, which visitors entered through her open legs, while inside was a milk bar, aquarium, cinema and children’s play area.

Saint Phalle produced a sculpture of Miles Davis in 1999, that still stands today outside The Negresco Hotel in Nice.

While creating her famous Tarot Garden in Tuscany, Saint Phalle lived in her Empress sculpture for ten years.

Saint Phalle developed chronic respiratory inflammation after spending years working with toxic materials and would eventually die of lung failure at the age of 71.