HomeAncient HistoryOvid and Catullus: Poetry and Scandal in Ancient Rome

Ovid and Catullus: Poetry and Scandal in Ancient Rome

Ovid and Catullus were two of ancient Rome’s greatest poets. Read on to discover how their pioneering poetry and tumultuous love-lives embroiled them in some of Rome’s most salacious scandals. 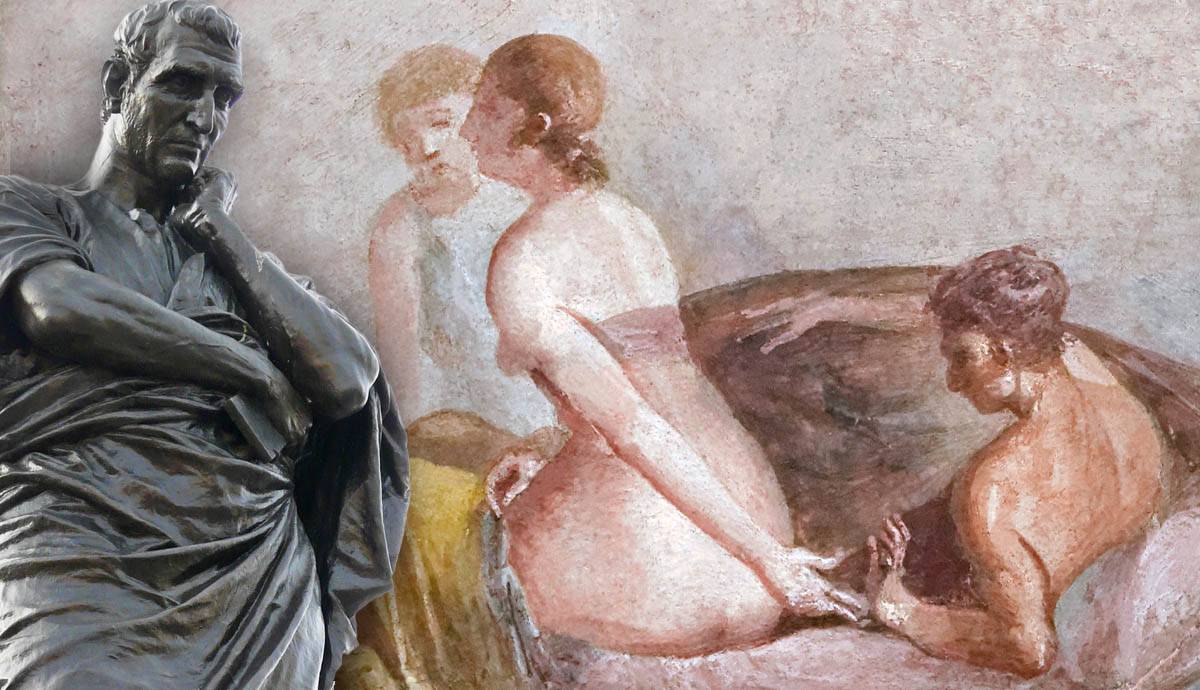 Poetry was one of the most elevated and popular genres in Roman literature. Its topics ranged from the epic stories of Virgil to the salacious epigrams of Martial. Arguably, the most personal of the poetic themes was love poetry. Latin love poetry often took the form of an elegy, a poetic genre that thrived on personal experience and self-expression. Inspired by earlier Greek lyric poets, the Roman love poets focused on the intimate details of relationships and love affairs. Both Ovid and Catullus are believed to have used events from their lives as inspiration for their love poetry. This real-world experience added vividness and authenticity to their work. But it also revealed a darker world of adulterous affairs, public scandals, and imperial wrath.

Ovid and Catullus: Two of the Greatest Roman Poets

Very few substantiated facts are known about Catullus’ life. The information that we do have comes from either the poet himself or other ancient authors. St. Jerome (circa 342 – 420 CE) mentions Catullus in his Chronica and states that he was only 30 years old when he died. The dates of his birth and death are debated, but they are widely believed to be 84 – 54 BCE.

Catullus mentions his home town of Verona a number of times in his poetry. During his lifetime, Verona was a town in Transpadane Gaul (modern-day northern Italy), whose inhabitants did not yet qualify for full Roman citizenship. He appears to have come from a wealthy local family. Suetonius says that Julius Caesar was accustomed to dining with Catullus’ father when in Verona (Julius Caesar 73). Catullus also had a brother, who died during his lifetime. Poems 65, 68, and 101 describe the raw grief and anger he felt at this personal loss.

At some point, Catullus moved to Rome. He began to write poetry and became friends with some of Rome’s fashionable elite. His social circle included the writers Calvus and Cinna and the famous lawyer and orator Hortensius. We also know that he was on the staff of the governor of Bithynia from 57 – 56 BCE. The governor, Memmius, was the focus of Catullus’ scorn in more than one of his poems.

One hundred and sixteen of Catullus’ poems survive today. His brief, intense verses display a mastery of language and a razor-sharp wit. His poems are widely believed to be among the best examples of Latin poetry ever written.

Publius Ovidius Naso, known today as Ovid, was born in Sulmo (central Italy) in 43 BCE. As the son of a wealthy landowner, Ovid was given an elite education as preparation for a future senatorial career. But he soon realized that a life in politics was not for him when he developed a passion for poetry as a young man. By his early twenties, he had published a book of love poetry, Amores, and had begun to move in fashionable literary circles in Rome. He went on to write further erotic works, the most famous being Ars Amatoria, and between 1 and 8 CE, he wrote his great epic poem Metamorphoses. Ovid is considered to be one of ancient Rome’s greatest poets. Known for his creativity and technical skill, he has inspired writers and artists across the centuries.

One of the many features that Ovid and Catullus had in common was that they both used pseudonyms when they referred to their mistresses in their poetry. Ovid actually refers directly to Catullus’ use of the pseudonym in one of his poems (Tristia 2.427). Pseudonyms had the effect of hiding the true identity of the woman concerned, probably because she was married to someone else. It was these adulterous affairs that drew both Catullus and Ovid into some of the most salacious sex scandals of their time.

There are twenty-five surviving poems written by Catullus about a woman whom he calls “Lesbia”. These poems are among his most famous works, and they are praised for their seemingly candid depiction of love. The reader experiences the full course of the turbulent affair between Lesbia and Catullus through the eyes of the poet.

The order in which Catullus’ poems about Lesbia are meant to be read is unclear. The poems have been passed down through the ages via incomplete manuscripts, so it is difficult to know if they are in the order presented by the poet. Perhaps the lack of order was intentional since it leaves the reader with a mixed and complex interpretation of the relationship.

In Poem 2, Catullus writes about a pet sparrow belonging to Lesbia. He describes how she plays with, tempts, and teases the bird, and he laments the fact that he cannot play with it in the same way. The poem reflects the playful nature of the early days of their relationship. But there is also an undercurrent of lust as shown in the use of euphemism: the bird is believed to represent a part of the poet’s anatomy.

In Poem 58, Catullus appears to have discovered a betrayal as he implies that Lesbia is sleeping with other men. His anger is brutal as he presents her as a prostitute plying her trade “at crossroads and in back alleys.” By Poem 72, his feelings toward her have become more complex. He declares that his love for her has become more lustful but yet cheaper “because such hurt compels a lover to love more but to like less.”

The true identity of Lesbia cannot be proved for certain. However, most modern-day academics believe that she was Clodia Metelli. Born around 96 BCE into the ancient noble family of the Claudii, Clodia later married Metellus Celer, a powerful senator who was consul in 60 BCE. She was also the sister of Publius Clodius Pulcher, who became Tribune of the Plebs in 58 BCE. Clodius was a violent troublemaker who made many enemies during his tenure, most notably the orator and politician Cicero.

In the mid-50s BCE, Clodia embarked on a very public affair with Marcus Caelius Rufus. In doing so she was betraying Catullus, who discovered their relationship and wrote about it with bitterness in a number of poems. To add insult to injury, Rufus was also a close acquaintance of Catullus, and the poet was left devastated by his friend’s disloyalty.

Clodia and Rufus’ affair did not end well. Clodia accused Rufus of attempting to poison her, and in 56 BCE a legal trial was held that shook Roman high society to its core. Rufus employed the services of none other than Cicero to defend him in court. Cicero launched a vicious and personal attack on Clodia, perhaps fueled by his feud with her brother. Clodia’s affairs were common knowledge and so Cicero used her reputation to discredit her character in court. Lurid details of her sexual appetite were read out for all to hear but, perhaps worst of all, Cicero also made the suggestion that she had even slept with her own brother, Clodius. Catullus himself also fanned the flames of this rumor when he referred to an inappropriate relationship between Lesbia and her brother, who he named Lesbius, in Poem 79. Rufus was found not guilty when the trial reached its conclusion. No further ancient references can be found regarding the infamous Clodia and her eventual fate.

Like Catullus, Ovid used his real-life experiences as inspiration for his love poetry. In the Amores, he too narrated the course of a doomed love affair with a woman whom he named Corinna. The identity of Corinna is not known, and it is also possible that she was just a fictional construct designed to suit Ovid’s poetic purpose. For Ovid, it was not the pseudonymous Corinna who brought misfortune into his life, instead it was poetry itself.

In 2 CE, Ovid published the Ars Amatoria, which translates as the “Art of Love”. In these poems, he poses as an expert in finding love and sets out his advice for both men and women across three books. Light-hearted and witty, the poems advocate the use of charm and trickery in securing one’s love interest. They also focus heavily on adultery and the importance of sex.

The Ars Amatoria soon gained popularity among the fashionable elite in Rome. But, unfortunately for Ovid, they also attracted the attention of the imperial court of Emperor Augustus. At the turn of the first century CE, Augustus was in the process of reforming Rome and its empire. His focus was wide-reaching and determined as he set about rebuilding infrastructure as well as reintroducing traditional moral and religious values. Augustus believed passionately in the sanctity of marriage and loathed the vice of promiscuity.

Ovid’s mischievous verses became known to him; they clashed with everything he believed in and sparked irrepressible anger. In 8 CE, Ovid was exiled to the remote settlement of Tomis on the Black Sea. His exile was instigated by Emperor Augustus personally and, unusually, did not involve the Senate or a court of law.

In a poem written in exile (Tristia 2), Ovid describes the reasons for his banishment as “carmen et error,” which translates as “a poem and a mistake”. Here lies one of the great mysteries of Roman literature. While the poem can be safely assumed to be the inflammatory Ars Amatoria, the details of the mistake are entirely speculative. Ovid provides no solid information on what his mistake was, and in the absence of hard facts a number of theories have arisen over the centuries.

One of the most persistent ideas focuses on a connection between Ovid and Julia the Elder, the daughter of Emperor Augustus. Julia was known for her adulterous affairs, and Seneca even claimed that she played the part of a prostitute for her own sexual gratification. In the early years of the first century CE, Julia was also exiled by Augustus. Officially, her exile was due to her apparent part in a plot to assassinate Augustus. But some believed that the true reason was because of her perceived sexual depravity.

The fact that both Ovid and Julia were exiled at similar times and for similar reasons has led some academics to believe that there was a link between the two. Perhaps Ovid was personally involved with Julia, or maybe he knew something about her that would have humiliated the imperial family. Either way, Ovid would never return to Rome. He passed the final decade of his life in a provincial backwater far away from the comforts of his former world. He wrote a number of letters of contrition to powerful friends in Rome and even to Augustus himself, but none were successful. Around 17 – 18 CE, Ovid died in exile of an unknown illness.

Interestingly, in 2017, the City Council of Rome voted unanimously to revoke Ovid’s exile decree and to pardon the poet from any wrongdoing. So, more than 2,000 years later, Ovid finally received his public reprieve for a crime we will probably never fully understand.

By Laura HaywardMA Classics, PGCE Classics, BA Latin with GreekLaura Hayward is a contributing writer and researcher from London, UK. She is a specialist in the field of Classics, in which she has either studied or worked for over twenty years. She holds a B.A. and M.A. in Classics from University College London. She has also worked as a teacher of Classics in a leading independent school in London. Her particular areas of interest are Latin language and literature as well as Roman art and epigraphy.