Pablo Picasso is best known for his cubist paintings, but he also created remarkable ceramics. Here is the story of his vases, plates, and jugs. 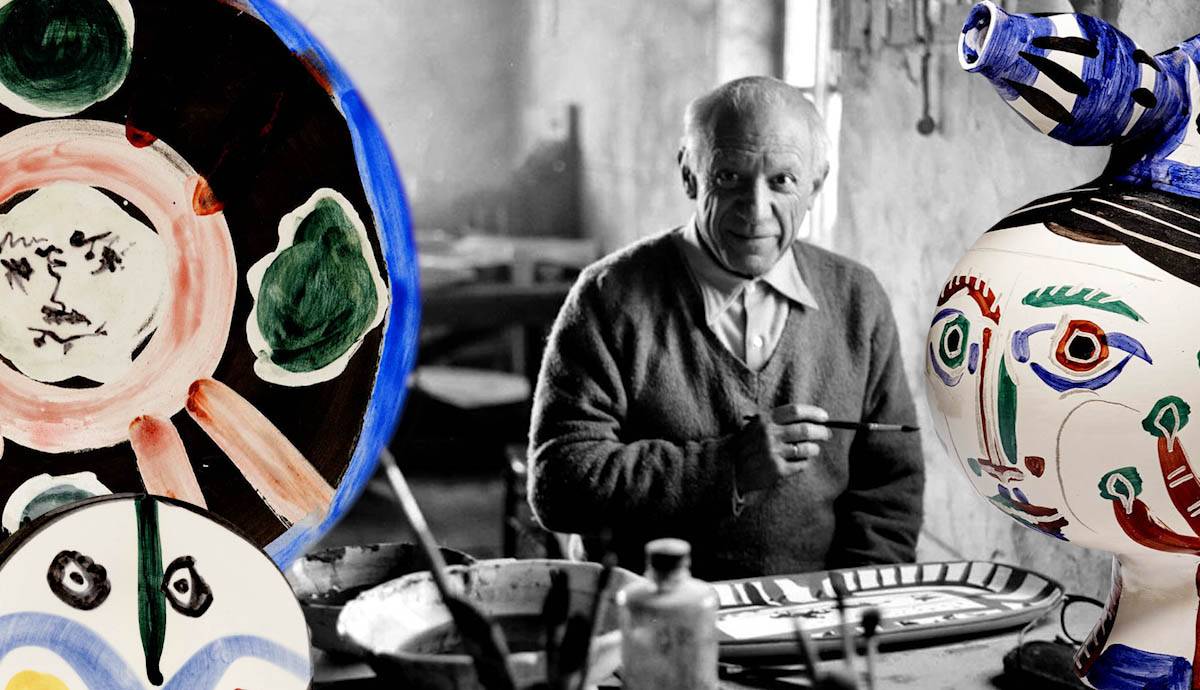 For some time, Pablo Picasso’s ceramic art was not very popular among art critics. It was seen as a decline of the artist’s work and as a waste of Picasso’s talent, especially compared to his groundbreaking paintings. The negative reputation of his pottery as frivolous and commercially motivated decoration changed in the 1980s when the idea of modernism as a linear movement was shattered. After that, Pablo Picasso’s ceramics received more and more recognition and these works were finally considered important components of his post-war art. The Spanish artist designed over 600 editions of his colorful and uniquely shaped pottery from 1947 to 1971.

Pablo Picasso started to create his extensive collections of ceramics in 1947 at the Madoura pottery which was situated in the French commune Vallauris. The owners of the pottery studio, Suzanne and Georges Ramié, invited Pablo Picasso to work at their studio. At the time, the town evolved into a hub for art pottery. A year earlier in 1946, Picasso visited a pottery show in Vallauris and was so inspired by the local handcraft that he began working with the material. Pottery became an important form of artistic expression for Picasso after the Second World War. Tanya Harrod wrote that “Picasso’s interest in ceramics at Vallauris coincided with his years of extraordinary creative vitality – a kind of post-war expansiveness and celebration of life.” There are a few reasons for Picasso’s interest in pottery and why he felt that ceramics would make great works of art. Let’s take a look at them.

1. The Connection to the Spanish Tradition of Peasant Pottery

One possible reason for Picasso’s interest in ceramic art was that the ceramics of Vallauris reminded him of the peasant pottery of southern Spain. While traditional pottery experienced a decline in other countries like England or France, the production of Spanish peasant pottery was still active. The Spanish ceramic artist Josep Llorens I Artigas wrote a book about this continued tradition called Spanish Folk Ceramics of Today in 1974.

The shapes and decorations of the vessels represented in the book are often very similar to Picasso’s ceramics. The artist’s use of zoomorphic shapes and voluminous, rough pottery with curved handles can also be found in the book’s depiction of traditional Spanish ceramics. Picasso was less concerned with the material quality of his ceramics than with the artwork’s visible connection to the Spanish tradition of peasant pottery.

2. The Chance to Make Art Available to More People

Another reason for Pablo Picasso’s interest in ceramics was the art form’s availability. By selling ceramics, Picasso was able to make his otherwise exclusive art accessible to a wider public. The original pieces that Picasso made were reproduced and numbered. This way, a larger number of his artworks could be sold, in contrast to his paintings which were non-reproducible and very expensive. Picasso’s ceramics were therefore accessible at a lower price and ultimately to a wider audience. Georges Ramié, who was the owner of the studio in which Picasso worked wrote:

“He [Picasso] decided that, apart from his original personal work, a collection of works should be opened, conceived so that each one of them could be repeated in a number of copies to be determined. Their nature should permit certifying the most exact fidelity with the piece and a guarantee of absolute authenticity, convincing the amateur art lover who wishes to possess one in affordable conditions of a loyal and incontestable work.”

In the 1950s and 1960s, people could buy Picasso’s pottery for under £100 while his paintings were only affordable for affluent art lovers. This desire to make his works more inclusive intensified after Picasso joined the French Communist Party in 1944. Two years later, Picasso wrote: “I wish they would issue my etchings in a large number of copies and sell them cheap. Soon I’m going to execute them especially.” Not only the low price but also the art form made Pablo Picasso’s ceramics more available to people. While contemporary art was often hard to understand and seemingly exclusive, pottery was a well-known and traditional form of art that people could display and enjoy in their own homes.

Pablo Picasso also felt that ceramics would provide him with the possibility to unite painting and sculpture. By creating and decorating ceramics, the artist could transfer the characteristics of his cubist paintings to three-dimensional objects. According to Tanya Harrod, Picasso said that “while painting should create a sense of space, he [Picasso] had found that by painting a ceramic form he was able to create the multiplicity of flattened viewpoints which he demanded from sculpture.” His ceramic art allowed viewers to experience the spatial qualities of painting as well as the multiple perspectives provided by walking around or moving a sculpture or an object.

Pablo Picasso’s interest in the connection of seemingly paradoxical things – like painting and sculpture – is also visible in one of his earlier works called Glass of Absinthe. The sculpture depicts the typical shape of a glass that is used for serving absinthe. It also shows a slotted spoon with a sugar cube on top. Absinthe is usually served by pouring the liquor onto a sugar cube. The liquid then drips through the slotted spoon and into the glass. While the glass and the sugar cube of Picasso’s sculpture are made of bronze, the slotted Absinthe spoon is real.

He painted the sculpture by hand just like he did with his ceramic art. Glass of Absinthe does not only combine painting and sculpture, but it also experiments with the incorporation of everyday objects into art. In both his pottery and Glass of Absinthe, Picasso unites seemingly contrary things like art and mundane objects such as cutlery or tableware, as well as the art of painting and the art of sculpture. Picasso fittingly described the process of making Glass of Absinthe by saying: “I was interested in the relation between the real spoon and the modeled glass. In the way they clashed with each other.”

How Picasso Made and Decorated His Ceramic Art

Since Pablo Picasso had no training as a ceramist, he learned the craft by experimenting with the materials. While the pieces were made by professional potters at the Madoura pottery, Picasso would alter them to create his distinctive ceramic art. The artist reshaped, engraved, and painted the pottery. According to the Swiss patron and art collector Georges Bloch, Picasso used a variety of tools to create the designs for some of his ceramics such as burins and beveled chisels but also blunt pencils, knives, or any other object which he had at hand.

Due to his background in graphics, Picasso had experience in engraving and creating lithographs. This experience did not only provide him with the necessary skills for engraving his pottery, but it could also explain why he chose to produce numbered editions of his ceramics like it is common for the reproduction of graphics. This is especially interesting since it was quite unusual to produce numbered editions of pottery.

Pablo Picasso’s simpler ceramics, such as engraved plates, were often reproduced by using molds. His more complex pieces, like his intricate vessels and vases, were usually recreated by hand. The artist would design the original objects for his editions and craftsmen would recreate them by working strictly according to Picasso’s models.

The decoration of Picasso’s pottery showcases themes, colors, and a simplistic style as well as crude brushstrokes that are characteristic of Picasso’s art. His ceramics seem to especially predict the painting style of his later years. In 1998, Richard Stone wrote for Artforum International:

“Working in the pottery at Vallauris certainly generated ideas that became trademarks of Picasso’s late painting style – a swift, loose handling, impatient of finish, presaging those linear head-and-shoulders portraits on plain backgrounds that would come a few years later. The comparison with children’s paintings of heads on white paper is obvious, but it should be said that Picasso never confused his aims: The lightness and quick humor of the ceramics were specific to that medium. Rarely is he in a somber mood.“

The Legacy of Pablo Picasso’s Ceramics

Even though Picasso’s ceramic art was not seen as equivalent to the rest of his work for some time, the public and critical opinion towards his pottery have changed since then. The artist’s son described Picasso’s connection to his ceramic art as profound and personal. Even if Picasso thought of his pottery as personal; the creation of his plates and vessels was far from being just a hobby. Along with an exhibition, the survey “Picasso: Ceramics” published by the Louisiana Museum of Modern Art in Denmark, shows that the artist valued the experimentation with and possibilities of pottery as an artistic medium. More and more museums exhibit Picasso’s ceramics and treat them as an important part of his oeuvre.

Since their creation, Picasso’s ceramics have become increasingly popular, and consequently have been the subject of various publications, exhibitions, and auctions. The auction house Christie’s even published a collecting guide for Picasso’s ceramics, and from 2015 to 2016, prices for the artist’s pottery soared. During that time, Sotheby’s sold a foot-tall terra-cotta owl figure made by Picasso in 1953 for an $1.9 million, demonstrating the incredible value now placed on Picasso’s ceramics.