HomeStoriesCreating a Liberal Consensus: Political Impact of the Great Depression

Creating a Liberal Consensus: Political Impact of the Great Depression 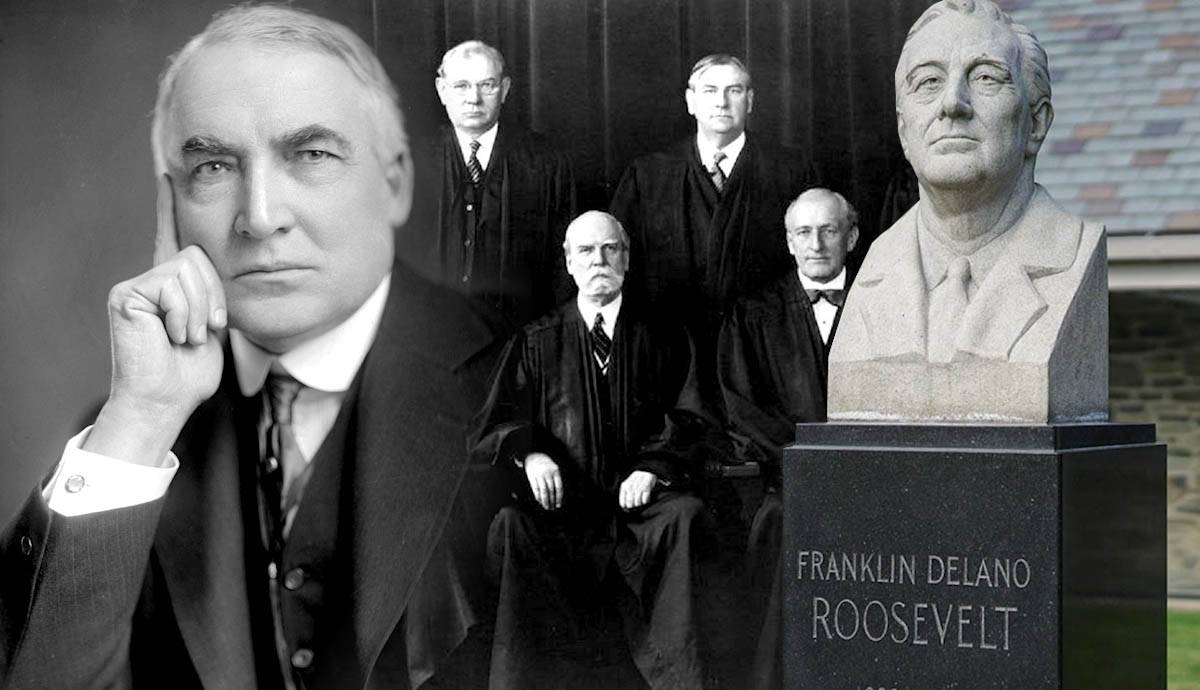 Prior to the Great Depression (1929-39), the United States existed in an era of laissez-faire policies toward business and economics under Republican presidents Warren G. Harding (1921-23), Calvin Coolidge (1923-29), and Herbert Hoover (1929-1933). Harkening back to the nation’s founding, many believed that the federal government should have little role in regulating businesses or the economy. In fact, it was only in 1913 that the 16th Amendment to the U.S. Constitution allowed for creating a federal income tax.

Thus, the 1920s were fiscally conservative compared to what came thereafter. However, although most Americans quickly appreciated the fiscal liberalism of President Franklin D. Roosevelt’s Democratic Party and their ushering in of the New Deal era, social liberalism would take several more decades.

Before the Great Depression: Republican Era

Following the horrors of World War I, many Americans wanted to return to a focus on domestic issues and tradition. In fact, Republican president Warren G. Harding declared before his 1920 party nomination that it was a time for “normalcy…serenity…sustainment in triumphant nationality.” Contrary to prior expectations, Harding did not push for U.S. involvement in the League of Nations, the post-WWI international coalition that was a weak predecessor to the later United Nations (est. 1945).

After Harding’s unexpected death, vice president Calvin Coolidge took over the Oval Office and continued Harding’s quiet conservatism. Coolidge cut taxes, which proved very popular at the time but was later deemed controversial. After Coolidge (known as “Silent Cal” for his calm and usually quiet demeanor) chose not to run for a second full term in 1928, the Republicans retained the White House with former Secretary of Commerce (1921-28) Herbert Hoover, a self-made millionaire. Economically, the trend of electing small-government conservatives made intuitive sense due to strong growth and prosperity.

Socially, the 1920s saw some liberal evolutions with the arrival of the flapper lifestyle among young women and the proliferation of jazz music. Flappers were women who came of age after World War I, and who adopted more carefree, exuberant norms typically associated with men: swearing, drinking alcohol, wearing their hair short, and driving automobiles. Linked to this sudden increase in social liberalism, at least for white women, was the jazz revolution. Newly accessible technologies like radio and record players allowed Americans unprecedented access to the music of their choice, including the faster-paced, exciting music of African American jazz musicians.

However, these liberal evolutions occurred within, and perhaps in defiant response to, a surrounding conservative movement: Prohibition. Beginning in January 1920, the ”noble experiment” of the 18th Amendment to the U.S. Constitution banned the trade of liquor. This increasingly controversial movement, which made most alcohol illegal, continued through the outset of the Great Depression.

The Beginning of the Great Depression: Calls for Fiscal Reform

Bradford DeLong of the National Bureau of Economic Research (NBER) declares that “the U.S. government did not have a fiscal policy, at least not in the sense that economists have meant for the past two generations.” This means that the federal government did not actively adjust spending or taxation to affect the economy, either through stimulation to ease unemployment or contraction to combat inflation. Many citizens still viewed government involvement in the economy with suspicion, likening it to oppressive control. Policymakers ascribed to classical economic theory, which posited that the free market would naturally adjust to counteract any problems and restore balance. A “survival of the fittest” mentality was common at the time, springing from the colonial era stereotypes surrounding Social Darwinism.

When the 1929 stock market crash led to the Great Depression, however, the situation was so dire that most Americans quickly shifted from conservatism to liberalism when it came to their economic ideals. By the early 1930s, many citizens were desperate for federal government intervention in the economy. The failure of the economy to return to equilibrium in a timely fashion effectively ended much support for fiscal conservatism and adherence to strict classical economic theory.

Demanding fiscal reform to promote increased federal government spending, Americans elected Democratic presidential nominee Franklin D. Roosevelt in 1932 in a landslide. Incumbent president Herbert Hoover, promoter of conservative fiscal ideals, was swept aside and remained, for decades, a rather loathed figure. Immediately upon inauguration, Roosevelt set forth on enacting his New Deal reforms, which he had championed in his campaign. The New Deal created a slew of new government agencies and projects, which pumped billions of dollars in new federal spending into the economy. Purposeful spending on large-scale infrastructure projects resulted in millions of unemployed men being hired, helping return income to countless desperate families.

Political Results of the New Deal: Fiscal Liberalism Made Permanent

The success of the New Deal in reducing unemployment and easing the Great Depression caused a permanent political shift in the United States, and indeed the entire Western sociopolitical world, toward fiscal liberalism. Although conservatives would often critique Democratic calls for increased government spending as wasteful, even ardent Republicans would not suggest substantially reducing federal spending on infrastructure. Even after a Republican president returned to the White House – Dwight D. Eisenhower in 1953 – federal spending remained elevated compared to pre-Depression norms. In fact, Eisenhower is widely known for creating the U.S. interstate highway system, which was the largest infrastructure project since the New Deal. The ongoing Cold War (1945-1989) and the need to maintain a nationwide infrastructure developed by the New Deal, World War II, and early Cold War era necessitated continued political support for strong fiscal stimulus, especially through defense spending.

The 1930s saw a political party realignment, with African Americans slowly shifting their support from the Republican Party – of which famed president Abraham Lincoln had been a member – to the Democratic Party. Much of this was due to the Republican Party’s refusal to forcefully seek economic redress for the Great Depression. Indeed, black unemployment was substantially greater than white unemployment, which helped override traditional black support for GOP. Even though the Democratic Party was still the party of pro-segregation Southerners, the increasing prominence of Northern Democrats like Franklin D. Roosevelt helped evolve the Party’s national image. Ultimately, the New Deal made the Democratic Party the undisputed political party of fiscal liberalism, attracting black voters for the first time. Although FDR did not strongly champion civil rights, which is today a source of controversy, some New Deal administrators made strides in reducing racism in their respective programs.

President Franklin D. Roosevelt’s popular New Deal reforms helped make the Democratic Party dominant in presidential politics until the early 1950s. The economic calamity brought together diverse groups, ranging from urban reformers to western progressives to southern populists. Taken collectively, these “New Deal Democrats” easily overwhelmed the Republican Party. However, the coalition of New Deal Democrats would weaken over time, with conservative Democrats, often known as Southern Democrats, being increasingly skeptical of the party’s growing social liberalism. The New Deal Coalition would hold through World War II and FDR’s third (1940) and fourth (1944) successful presidential elections, but would be challenged sharply in the late 1950s with the Civil Rights Movement. During the New Deal era and afterward, those opposed to strong government intervention in the economy and regulation of business, including pro-social reforms like the National Labor Relations Act, would increasingly shift to the Republican Party.

Political Results of the New Deal: Lasting Limits on Progressivism

Although the Great Depression had brought together a massive Democratic Party coalition under the tent of the New Deal, there were limits to president Roosevelt’s progressive goals. Despite FDR’s dominance over Congress, the conservative U.S. Supreme Court began striking down some of his desired legislation as unconstitutional. While voters may have been solidly convinced with an aggressive New Deal, unelected federal judges were not so easily swayed by public desire for fiscal stimulus.

Since FDR was unable to remove Supreme Court justices, he proposed a new law that would allow the addition of new justices to the nine-member Court. The controversial proposal, which became known as court-packing, would have added an additional Supreme Court justice for every current member over the age of 70, up to a maximum of 15 justices. For the first time, Roosevelt came under widespread criticism, and Congress refused to take up the proposal. To this day, there has been strong resistance to any proposal aimed at expanding the U.S. Supreme Court, which includes recent proposals made by some Democrats to counteract the multiple conservative justices recently added by Republican President Donald Trump. Thus, FDR’s failed attempt at expanding the Supreme Court has created a longstanding precedent of keeping the Court at nine justices.

A second limit to New Deal progressivism was civil rights. To maintain the support of Southern Democrats, FDR avoided being a public advocate for racial equality during the New Deal era. Unfortunately, segregation continued in the South throughout the New Deal era and even intensified due to the stresses of the Great Depression. U.S. citizens of Mexican descent were even forcibly repatriated to Mexico as white citizens feared competition for scarce jobs. Sexism was still rampant, and the vast majority of those hired by New Deal programs were men. The social barriers faced by minorities and women were not significantly addressed until the Civil Rights Movement of the 1950s and 1960s and the Women’s Rights Movement of the 1970s. Summarily, social liberalism has advanced much more slowly than fiscal liberalism and still faces barriers today, such as the recent controversy over critical race theory.

Politically, it is now expected that economic recessions be met with swift efforts at federal stimulus spending. During both the Great Recession (2008-2010) and the COVID recession (2020-2021), federal stimulus was applied hastily. Presidents Barack Obama, Donald Trump, and Joe Biden all applied FDR-championed methods to spread federal cash into the hands of struggling citizens. Even among Republicans, the recent rise of populism has increased voter demand for fiscal stimulus. As of 2021, a federal infrastructure stimulus bill, reminiscent of the New Deal, has generated bipartisan support for the largest stimulus package since the 1930s.

By Owen RustMA Economics in progress w/ MPAOwen is a high school teacher and college adjunct in West Texas. He has an MPA degree from the University of Wyoming and is close to completing a Master’s in Finance and Economics from West Texas A&M. He has taught World History, U.S. History, and freshman and sophomore English at the high school level, and Economics, Government, and Sociology at the college level as a dual-credit instructor and adjunct. His interests include Government and Politics, Economics, and Sociology.

Prohibition in the States: How America Turned Its Back on Liquor