HomeStoriesRussian Protest Culture: Why Does the Pussy Riot Trial Matter?

Russian Protest Culture: Why Does the Pussy Riot Trial Matter?

The protest punk group Pussy Riot is a demonstration of a power asymmetry between citizen voices and the political elite of Russia, influencing global feminism and protest movements worldwide. 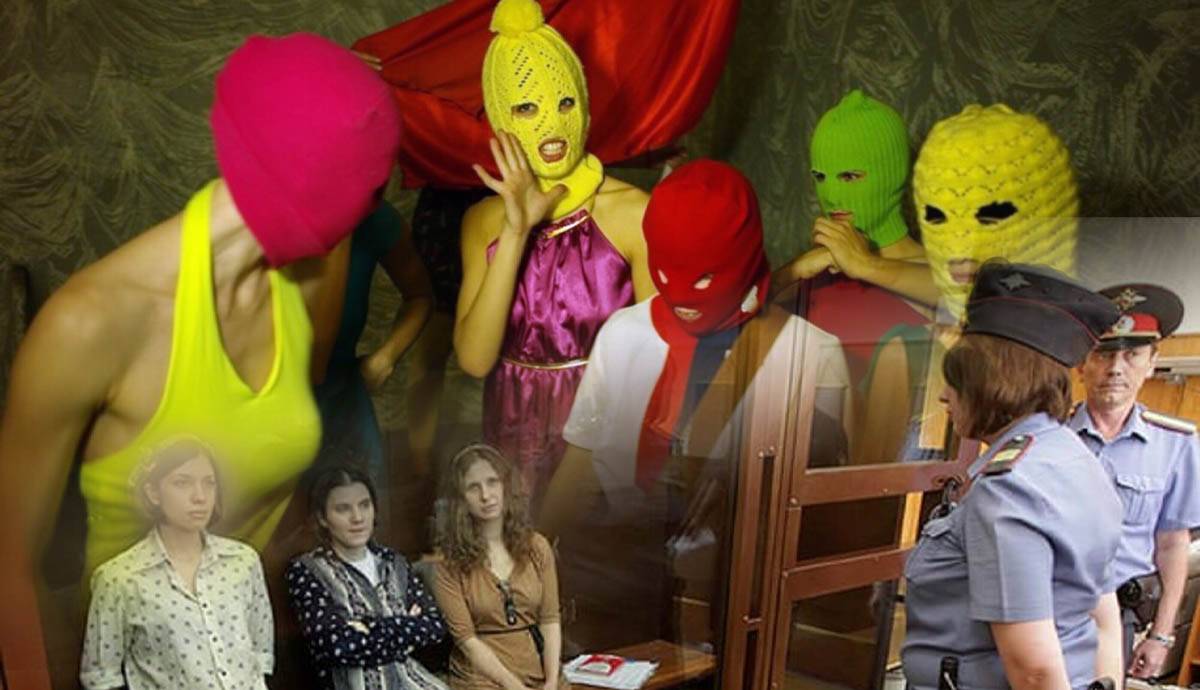 Pussy Riot is a feminist protest punk music and art performance group founded in August 2011 in Moscow, Russian Federation. The group became popular by staging guerrilla performances in public areas, videotaping and editing music videos and releasing highly controversial content on the internet. Feminism, LGBTQ rights, opposition to Russian President Vladimir Putin’s policies, and the close ties between the political elite and the Russian Orthodox Church are the main topics of their protest performances. In 2012, its members were sentenced for their guerrilla performance in Moscow’s Cathedral of Christ the Savior, causing solidarity demonstrations worldwide, as well as domestic and international controversy over the issues of justice, feminism, separation of the church and state, and the Russian culture of protest in general.

Pussy Riot as a group was formed in 2011 by 15 women claiming a radical feminist agenda. Some of the initial members were previously involved in the anarchist art collective “Voina.” The group members prefer to stay anonymous, wear bright-colored clothes to cover up, and use aliases for the public audience. The band took the inspiration from the Riot Grrrl movement of the 1990s, stating that: “Our performances can either be called dissident art or political action that engages art forms. Either way, our performances are a kind of civic activity amidst the repressions of a corporate political system that directs its power against basic human rights and civil and political liberties.”

Pussy Riot became popular within Russian society after recording the song “Ubey seksista” (“Kill the Sexist”), which was followed by a series of public guerrilla performances across the city of Moscow. The group performed on top of a garage near the Moscow Detention Center No. 1 to support opposition activists and were arrested during the mass protests against the State Duma election. They gained further influence at the beginning of 2012 after staging the song “Putin Zassa” (Putin Has Pissed Himself) at Moscow’s Red Square. Two members were arrested but released later on.

However, the most prominent appearance the group has made was in February 2012 at the Cathedral of Christ the Savior. A 40-second song,  “Punk Prayer: Mother of God Drive Putin Away,” was staged on February 21 inside the Cathedral, recorded, and later released on the internet. The performance quickly went viral and attracted international attention.

Maria Alyokhina, Yekaterina Samutsevich and Nadezhda Tolokonnikova were then identified. The general public of the Russian Federation saw “Punk Prayer” as an assault on Orthodox Christians, and authorities exploited it, characterizing the performance as hooliganism motivated by religious hatred.

The performance was an act of protest against the dictatorship of Putin, who had recently been reelected as a president of the Russian Federation. Electoral fraud and voter manipulation were widely alleged, and multiple massive demonstrations took place across Russia. But most importantly, the group tried to signal close ties between the Russian Orthodox Church and the corrupt government.

In their performance, group members urged the Mother of God to become a feminist and pointed out that both the Patriarch Kirill of Moscow and all of Russia worshipped President Vladimir Putin rather than God. As Nadezhda Tolokonnikova subsequently explained,

”In our song, we reflected the reaction of many Russian citizens to the patriarch’s calls for votes for Vladimir Vladimirovich Putin during the presidential elections of March 4, 2012. We, like many of our fellow citizens, wrestle against the treachery, deceit, bribery, hypocrisy, greed, and lawlessness particular to the current authorities and rulers. This is why we were upset by the political initiative of the patriarch and could not fail to express that.”
(Source)

In August 2012, following their arrest in March and the trial in July, Maria Alyokhina, Yekaterina Samutsevich, and Nadezhda Tolokonnikova were sentenced to two years in a penal colony. Samutsevich was eventually released on probation, but Alyokhina’s and Tolokonnikova’s sentences were maintained. Both requested to be imprisoned close to Moscow to be closer to their families. Instead, they were sent to gulags (labor camps) away from the city. The women were labeled as “prisoners of conscience” in response to their brutal sentencing.

The Pussy Riot trial and detention had been denounced globally by critics, human rights campaigners, and celebrities as a politically driven punishment that was highly disproportionate to the offense and resembled the Soviet period politics of show trials. Moreover, the performance sparked international debate about the Russian protest culture generally and more specifically about gender politics, human rights, and secularism in the Russian Federation, among other issues.

By the political elite of Russia and Vladimir Putin himself, the group was portrayed not as political activists but rather as terrorists, threatening the Orthodox Church. This fact confirmed an obsolete fusion of the Russian state and church – portraying how the Russian Church has helped redefine Russian state nationalism, its identity, and Russian culture after the collapse of the Soviet Union. Nearly three-quarters of the Russian population identify themselves as Orthodox Christians, making the Russian national identity closely tied to their religion.

The venue – the Cathedral of Christ the Savior – was not accidental. This Cathedral was built in the 19th century to celebrate Russia’s victory over Napoleon’s France. However, it was demolished during the Soviet Union and only rebuilt soon after the collapse of communism in the 1990s. The Cathedral became a landmark place for major national state occasions, making the state-church bond even tighter. This bond was a crucial point of Putin’s third presidential campaign in 2012, right before the guerrilla performance at the Cathedral. Putin assured the group of religious leaders, including Patriarch Kirill, to abandon the “primitive” distinction of church and state and to adopt “a regime of partnership, mutual help and support.” This type of discourse openly violated the separation between the state and the church mandated by the Russian Constitution.

While the arrest and verdict of Pussy Riot performers generated unprecedented attention and loyalty internationally, it caused conflicting reactions domestically within Russia. While some Russians believed that the group members were handled unfairly, the majority supported the court’s decision and agreed that the band had offended the Orthodox Church. This reaction of the general public to the performance and the result of the trial highlights how Russian gender politics portrays women who engage in political activism and feminism as aberrant and transgressive.

After the fall of communism, the process of rebuilding civil society with a particular focus on the development of women’s human rights and feminism became quite active. (A significant amount of foreign aid went toward the creation of women’s organizations, Russia became a signatory of almost every major human rights document.) However, many believe that Putin’s authoritative political approach, anti-western propaganda, and masculinity-based politics of nation-rebuilding played such a major role that the feminist agenda could not be restored domestically.

The Kremlin’s gender politics approach views women’s activism as non-oppositional and apolitical. Foreign funding is extremely limited, and to survive, women’s organizations are pairing with state agencies to promote “social services” and family-related issues. In addition, as feminism is propagated as being imposed by Western imperialism, the above-mentioned organizations engage in self-censorship and adopt depoliticized agendas. Feminism is viewed as inherently dangerous, violating the role of caregiver that the Kremlin has given women.

Unlike Western feminism, Pussy Riot’s version focused more on the authoritarian political regimes and Russian culture that created deviated ideas of feminism, sex, and family life. In Russia, feminism was perceived as a threat that could destroy the nation. “I consider this phenomenon called feminism very dangerous, because feminist organizations proclaim the pseudo-freedom of women, which, in the first place, must appear outside of marriage and outside of the family. Man has his gaze turned outward – he must work, make money – and woman must be focused inwards, where her children are, where her home is,” said Kirill, leader of the Russian Orthodox Church.

From the beginning of 2011 and especially after the 2012 trial, Pussy Riot has been able to influence the overall Russian culture of protest. This type of protest art earns its sociopolitical and cultural value mainly due to its ability to surpass traditional forms of opposition and civic protest. Instead of largely ineffective street protests, the band’s scathing critique of President Putin’s authoritarian regime was based on a robust combination of punk performance, a democratic agenda, and radical feminist views.

Recent surveys in Russia suggest that participation in mass protests has declined by half in 2021. The reason behind this is the apathy of the population and the repressive policy of the government. Citizens worry about losing the comfort they have achieved after the collapse of the USSR and, at the same time, fear the widely adopted policy of opposition suppression.

On the contrary, Pussy Riot supported the change by incorporating communication technologies and social media to reach out to a broader audience. By focusing on online presence, the group made sure that the voice of protest was heard and that their form of protest had immunity against Russian political censorship.

In addition to highlighting the unconstitutionally close relationship between the Russian Orthodox Church and the political elite as well as the direct involvement of the Church in politics, the harsh punishment and trial proceedings of Pussy Riot indicated a trend of criminalizing social protest and freedom of expression in the Russian Federation.

The group may have alienated themselves from the general public by being inspired by Western feminist movements and adopting reactionary, often highly contested methods. However, the band’s active advocacy of democratic, feminist, and human rights values demonstrates that the forms of protest they adopt are a powerful vehicle for social change.