HomePhilosophyRené Descartes’ Dualism: Are You a Mind or a Body?

René Descartes’ Dualism: Are You a Mind or a Body?

René Descartes’ dualism - his analysis of the relationship between mind and body - has been foundational to philosophical enquiry. 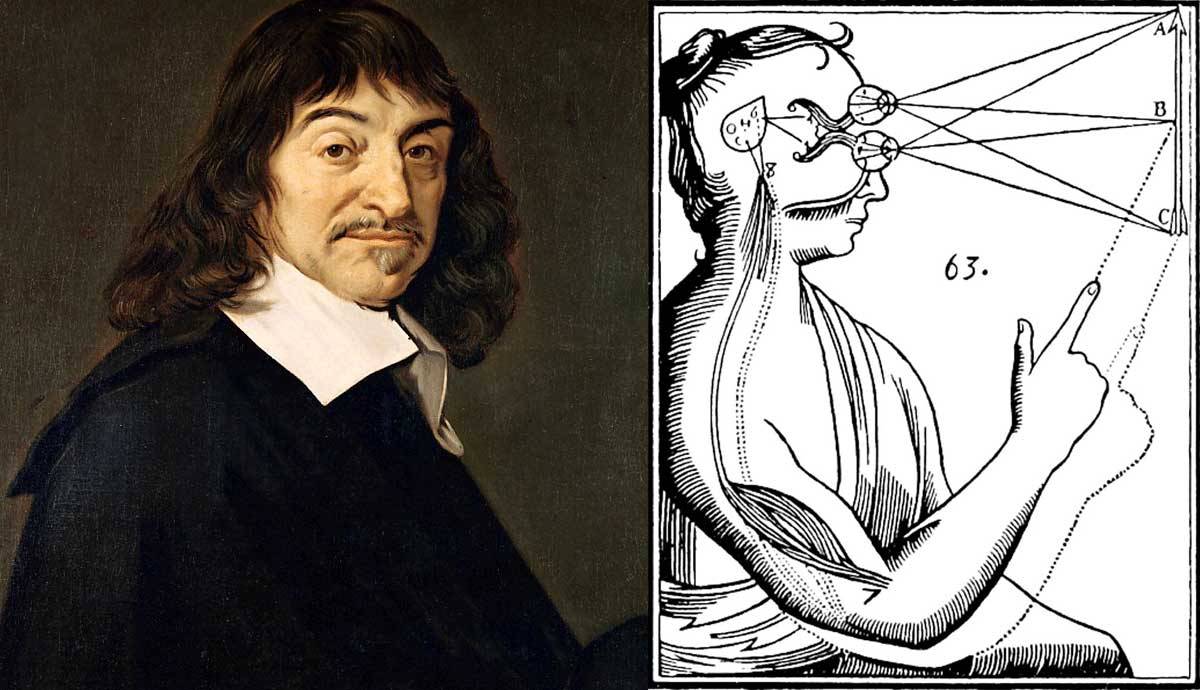 René Descartes is, almost without dissent, considered to be the first ‘modern’ philosopher, and his major works of philosophy are usually taken to be where the modern Western philosophical canon begins. Whereas in some disciplines the merits of having a canon are dubious, Western philosophy can be said to have a canon in at least one relatively uncontroversial sense. Namely, that of the reference by later philosophers to the works, concepts and systems of earlier ones. There is nothing which claims for itself the title of philosophy written in any European language since the 17th century could claim to be operating wholly independent of Descartes. This article considers what is perhaps his most influential idea– the differentiation of body and mind, also known as Descartes’ dualism. Before doing so, it is worth filling in some biographical detail.

The Origins of René Descartes’ Dualism: His Upbringing

Descartes grew up in a petit-bourgeois family in Poitou, who aspired to noble standing and therefore had fairly conventional notions about how their children should live. Descartes was the second son – had he been the eldest, he would likely have been burdened with responsibilities prohibitive to a career in philosophical enquiry. As it was, Descartes was able to study at La Flèche, a Jesuit college which Descartes himself felt offered the finest philosophical education on Earth. After a brief career as a soldier in various armies, Descartes sold a number of his family’s properties and settled down to a life centered on his mathematical, scientific and philosophical investigations. It is unusual that a philosopher has the means to practice philosophy unencumbered by any professional obligations, without having to teach or undertake some other form of employment which takes up a portion of their time and energy.

At La Flèche, Descartes received a broad education in Greek philosophy, from the Pre-Socratics through to Christian Neo-Platonists. Although his scientific and mathematical work certainly gave him a strong sense that new technology and new knowledge was on the verge of significantly changing human life – for instance he believed medical advances would extend his life by several centuries – his work betrays a familiarity with the work of Plato and Aristotle, and especially their theories of the relationship between the mind (or soul) and the body. Indeed, to understand Descartes’ own theory, as well as its reception by later philosophers, it is worth briefly summarizing Plato and Aristotle’s approach to mind-body dualism, which set the tone for various important debates over the relationship between body and mind in the modern period.

Plato on Mind and Body

Plato is famous for his conception of the ‘Forms’ – eternal things, perfect in themselves rather than the imperfect reflections or copies which we interact with immediately. Plato argues that these Forms are necessary for the existence of the world, and, more relevant to Descartes’ dualism, or theory of mind and body, that the Forms make the world intelligible because they constitute universals which the mind or intellect grasps in the process of understanding.

This conception of understanding as grasping reality which is non-perspectival is a critical attribute of various non-materialist theories of mind – that is, those which do not consider the mind an extension of the material world (as, on more or less any definition, the body is). Plato argues for the immortality of the soul, and one argument holds that the mind is immaterial because the Forms are immaterial, and the intellect must be of the same category or substance as that which it perceives or understands.

Aristotle’s argument for the immateriality of the mind is more subtle. For Aristotle, a form (note the non-capitalization, because a Form is not an independently existing entity for Aristotle) is the nature of something, while a description of the form of something would constitute a description of the properties of said thing. A form is not immaterial for Aristotle in the way that it is for Plato, just as it is not separable from the thing of which it is as a form as it is for Plato.

However, Aristotle does hold that the activity of the mind is immaterial, because unlike other faculties it does not have a correlating organ, as with (for instance) sight has the eye or hearing the ear. This is because such an organ is defined, in part, by what it cannot perceive – the eye cannot perceive sound, touch, taste or smell. However, there is nothing which the mind, in principle, cannot perceive, so the material limitations of such an organ conflict with the very definition of our minds. As the mind has no material organ, Aristotle is generally understood to think that the mind itself must therefore be immaterial.

Descartes’ approach to the relationship between mind and body is presented in two stages, with a seeming evolution between that presented in the earlier Discourse on Method and the later Meditations on First Philosophy. In Discourse, Descartes’ argument runs as follows:

“Next, I examined attentively what I was. I saw that while I could pretend that I had no body and that there was no world and no place for me to be in, I could not for all that pretend that I did not exist. I saw on the contrary that from the mere fact that I thought of doubting the truth of other things, it followed quite evidently and certainly that I existed; whereas if I had merely ceased thinking, even if everything else I had ever imagined had been true, I should have had no reason to believe that I existed.”

The Next Step: Inferring the Subject

It is from there that a subject is inferred:

“From this I knew I was a substance whose whole essence or nature is simply to think, and which does not require any place, or depend on any material thing, in order to exist.”

Now, before examining this inference, we can suggest one or two concerns about the existence of thought, the existence of the mind and associated categories. One manner of response to this argument is to observe that it does not adequately account for the possibility of error. Gary Hatfield puts this concern as follows:

In other words, it is quite possible that thought is wholly the consequence of however ignorant Descartes is of this possibility at this stage in his enquiry.

The Irreducibility of Mind

Another, related concern is – is thought irreducible to yet more basic component parts, or categorizable in some further, distinct category? Or, to put it another way, on what grounds can Descartes distinguish thought from other aspects of our mental life; how can he know that ‘thought’ is so basic that one instance of it reveals the existence of thought understood more generally? Here is examination, something close to the application of reason, and taking one kind of mental state, one form of cognition, and using it to infer the existence of all thought as its own category of thing, seems premature.

Thought itself is often understood as having a number of component parts – certain components associated with processing information, making inferences, intentionality, extrapolating from observations and so on. The category of thought is also in competition with various, and varyingly overlapping, descriptions for (colloquially speaking) what is going on in our heads: consciousness, cognition, mental acts and so forth. At different times, different parts of the mind are likely to be emphasized, and indeed quite often taken as the essential component of every part of our cognitive lives.

In Meditations, Descartes’ argument changes. First, he pivots to avoid inferring the separateness of mind from his body despite his inability to doubt that he is a thinking thing. Then, Descartes advocates substance dualism; he claims that matter and mind are two wholly separate substances. The main property of matter is that it has spatial extension, which the mind does not. The main property of mind is its capacity to think – it is a substance defined by its function. The most persistent problem with this approach, as with any form of substance dualism, concerns how these substances are meant to interact with one another. At what point do these two separate substances interact, and doesn’t any possible interaction suggest they are not absolutely different kinds?

Elizabeth, Princess of Bohemia and Descartes’ long term philosophical interlocutor, raised this issue in terms of causation. Given contemporary accounts of causation tended to rest on an analysis of extended properties, properties which Descartes explicitly denies mind, the question of how an immaterial thing such as the mind can participate in causation whatsoever, let alone with respect to material things such as bodies, is far from clear. This can be understood as a sub-species of a wider concern with denying a material component to mind, namely that it does appear to display certain material properties. The problems raised by Descartes approach were to occupy the next generation of philosophers, and substance dualism remains a very influential way of conceptualizing the mind-body problem.