Over three thousand years ago the legendary Shang Dynasty produced mesmerizing and mysterious bronzes whose symbolism and meaning still eludes us.

The Shang dynasty emerged at about the same time as when the Egyptian and Mesopotamian civilizations were also flourishing. By combining copper, tin, and sometimes lead, or zinc, bronze was the first metal humans produced in cultures around the world. As it became a new material to be used for the production of tools, weapons, and vessels, humanity was gradually ushered out of the Stone Age and into the Bronze Age. Within a few centuries, metallurgy would spread across Eurasia, and the craftsmen along the Yellow River would truly master this art. This new material gained a religious and political purpose as part of a clan’s worship of the Heavens, their Ancestors, and the spirit world. Their meaning is steeped in China’s rich, long, and deep cultural tradition.

The Shang (商) dynasty (c. 17th to 11th centuries BC) ruled over much of today’s northern China. A powerful state centered around modern-day Henan, Hubei, Shandong, Shaanxi, and  Shanxi provinces, its influence was felt over smaller states and cities as far as the Yangtze River. At one time relegated to the obscurity of legend, archaeology conclusively proved its historical existence. On the Jiaguwen (甲骨文), or “Oracle Bones”, inscribed tortoise shells and cattle shoulder bones, are archived in the oldest fully developed Chinese script divinations – the records of the Shang rulers. Archaeologists inform us that the Shang, spanning over two phases: the Erligang (二里崗) period (c.17th to 14th centuries BC) and the Anyang-Yinxu (安阳–阴虚) period (c.14th to 11th centuries BC) representing the move of their capital. They had an elaborate administration, religion, and economy, as well technologically advanced builders, farmers, bronzesmiths, and crafters. The Shang rulers, living in large cities dotted across the landscape, maintained the belief of their divine right to rule through the proper observance of intricate rituals and offerings to the Heavens and the Ancestors. These entities were regularly consulted over the auspiciousness or not of their policies and activities.

The Shang Bronzes: Excellence with the Master craftsmen

In northern China, between Shandong and Henan, the first bronze objects are directly following the styles of the preceding Neolithic culture of Longshan (c. 2000-1600 BC) where the mythical dynasty of Xia is said to have been. The Shang excelled in Bronze handicraft and produced richly detailed ritual vessels, decorative bits, musical instruments, tools, and to a lesser extent, weapons. The first examples of Bronze vessels imitate ceramic pottery designs. But, as their expertise grows, so too does their sophistication in these decorations.

Still in its infancy, the Shang bronzesmiths produce few pieces that are thin using an alloy of copper, zinc, and a high degree of tin. The innovation of the Shang is in their invention of a technique unlike the lost-wax method found across the world. The vessels were cast into carved and incised ceramic molds. By using this method, the craftsmen tended to opt for symmetrical and horizontal designs.

The bronzesmiths can cast alloys with varying ratios of copper, tin and lead into carved earthen molds at controlled temperatures ranging from 810 degrees to 960 degrees celsius according to the alloy. The higher the proportion of copper, the higher the temperature needed. The designs on bronze vessels grew increasingly ornate and refined as the walls were also being made thicker.  Gradually, the vessels were entirely covered in clearly separated designs and motifs.  By contrasting higher and lower relief motifs on the finely cast bronze, the Shang craftsmen’s mastery of the material is represented through the ever more elaborate and complex decorative schemes.

The Shang produced high-quality vessels with fascinating abstracted designs mostly derived from real and imaginary animals. Elephants, rams, birds, dragons, bulls, and the mythical taotie, on spiral patterns backgrounds flow from one motif into another rendering these richly ornate vessels you see here. The large-scale production of bronzes required an organized and knowledgeable workforce.

Thousands of bronze artifacts have been found over the years. The bronzes are classified according to function, such as cooking, storing liquid, storing food, tool, weapon, musical instrument, and so on. There are 30 different types of ritual bronze vessels meant for food and drink. The classification is derived from some epigraphic evidence and others assigned according to their use. Most of this classification is the work of Song Dynasty (10-13th century AD) historians and art enthusiasts.

Several different versions of the exploits of the legendary Yu exist. As the kingdom had been devastated by a great flood, the Emperor asked Gun to control the floods. Gun built great earthen dikes that burst. Yu, succeeding where his father Gun failed, tamed the great floods that devastated China by draining the water and guiding the river. His success earned him the position of Emperor. Founder of the famous Xia Dynasty (17th to 15th c. BC), he also divided the realm into 9 provinces and sent to each of them a bronze tripod (a Ding). The 9 Tripods, or Ding, passed into the following Shang and Zhou dynasties and came to symbolize power, prestige, and unity.

The bronze vessels held an important place in the prestige of the Shang rulers. For instance, in the tomb of the famous warrior Queen Fu Hao discovered near Anyang contained 1.6 metric tons of richly decorated bronzes. Vessels such as cups, jars, cauldrons, and so on, containing foods and drinks were used ritually by these rulers in order to affirm their ancestry and right to rule. The vessels were used for offerings to the ancestors and for other ritual observances and so were held in especially high religious importance. They are most commonly found in tombs where they were part of the wealth of things such as ceramics, weapons, jades, humans, animals, and chariots that they would have with them in the afterlife.

Shang Dynasty bronze vessels were sacred and tangible symbols of heavenly power. Their use in public rituals reinforced their role as leaders of their people and their privileged direct communication and enactor of the will of the Heavens and the protection of the ancestors. The designs on these vessels were intended to fend off inauspicious forces that may interfere with the rituals. Bronzes often had inscriptions of the owners or the clan. The meaning of these combinations of mythical and real animals and abstract designs was clearly important to their owners but remain a mystery to us today.

For example, the ritual bronze vessel Taotie’s face with two large eyes, a nose, no jaw, and occasionally horns is one of the most recognizable motifs of ancient China, despite the many potential variants. The face of the legendary Taotie, son of the God Jinyun, whose gluttony, malice, and anthropophagy is a reminder to all those who know his tale of the evil of greed, wastefulness, and avarice. Found on Neolithic Liangzhu culture jades, and in Xia dynasty bronzes, the ancestral origin of this motif goes far into the textual obscurity of earliest farmers of China. Yet, despite its remoteness in time,  this fearsome face ought to remind us of these important lessons learned from the first farmers and the thousands of generations of farmers ever since.

As of China’s most ubiquitous symbols, the dragon (long –龍) is undoubtedly a creature of vastly varied meanings, symbolisms, and importance. The Chinese dragon is closer to the snake than the western European dragon. It lives in the water, in the heavens and on the earth. Dragons come to represent power, divinity, and the Waters. Hundreds of legends exist with dragons.  It became the symbol of imperial and aristocratic power and, by some, as the god of water. Dragons appear in the Jiaguwen as a rising snake with whiskers and horns and on bronzes his form is more stylized.

One of the most recognizable shapes of Shang Dynasty bronze is the Ding-tripod vessels. For thousands of years, these types of vessels have been symbols of power and so a ruler’s ability to acquire a high quality Ding-tripod meant his rule legitimized and favored by the Heavens. The Ding, however, with its round body, large handles and cylindrical legs, are in pottery and bronzes a common shape for food containers and cooking vessels. The Shang era Ding vessels  are thin, with a deep and round body, small vertical handles and usually hollow legs. By the end of the Shang period, their shape becomes even rounder, the handles become thicker, and the legs are no longer hollow and instead can have stylized leaf-shaped legs with designs of dragons or birds for instance.

The chalice-shaped Gu (觚) vessels with its flaring terminals are probably the most recognizable type of Chinese vessels. The goblet, which likely contained some fermented wine, was decorated in its middle part. Also derived from ceramic predecessors, the Gu is often decorated with a frieze of  taotie (饕餮) masks and sometimes with geometric motifs. By the end of the Shang period, the Gu become taller, more slender and entirely decorated.

The wine vessel Jue (爵) tripod was meant to contain and reheat fermented drinks especially during ritual ceremonies. The oldest type of bronze vessel which is not derived from ceramic designs. This is an innovation by the first metallurgists, even though it may derive from other unknown objects which have not survived in the archaeological record. 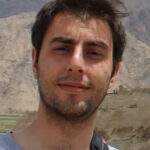 10 Ancient Chinese Inventions That Will Surprise You
By Alexander Westra, in Ancient History