The Story of Sundiata: An Enduring West African Epic

Storytellers across West Africa have recited the Epic of Sundiata for more than seven hundred years. The story of Sundiata is one of perseverance, conquest, and cultural richness. 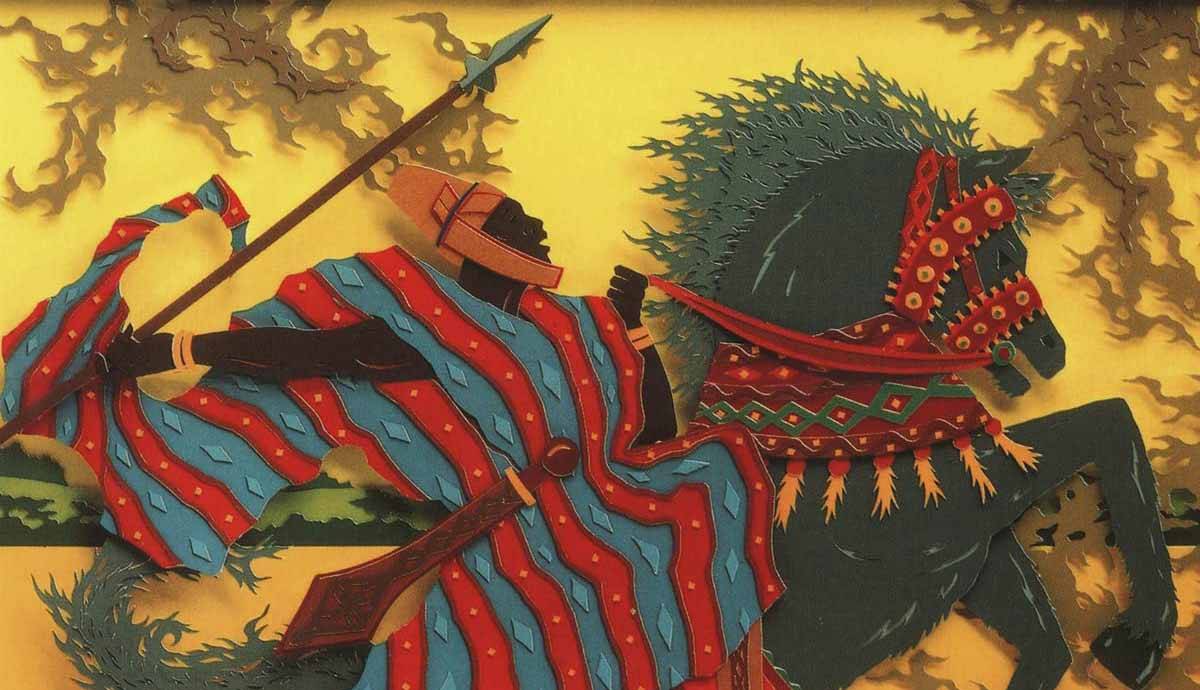 The story of Sundiata is perhaps West Africa’s best known epic poem. Across time and place, cultures have told and retold stories of great heroes, formidable villains, and exciting adventures, and West African societies are no exception. For over seven centuries, professional storytellers — known in English as griots — have passed on the tale of Sundiata orally to future generations. The plot has inevitably changed with time and depends on the storyteller, but the core elements have largely held up. Despite the great changes the world has witnessed over the past seven centuries, the exploits of the part-historical, part-legendary Sundiata Keïta continue to fascinate people. At its center, the Epic of Sundiata is a tale of triumph and cultural richness, which can be appreciated by anyone.

Sundiata and the Role of Griots in West African Culture

Before we delve into the story of Sundiata itself, we should quickly look at the roles that griots (called jaliw in the local Mandé languages) play in West African societies. Jaliw are most known as storytellers and musicians, playing instruments such as the 21-stringed kora in an official capacity.

Yet a jali’s role is not limited to playing music and reciting epic tales and proverbs. Jaliw also keep the genealogies of important families, memorizing them and passing them on to future generations by word of mouth. This method of recording history is known as the oral tradition. Without its continued practice by the jaliw, a great amount of West African history would be lost to us today.

Similar to the caste system in India, the Mandinka ethnic group in West Africa have long maintained stratified systems of social relations. Historically, not just anybody could become a jali. Instead, jaliw inherited their roles from their parents, with sons taking on the occupation of their fathers. This caste-like social system has survived into the twenty-first century, but generally it is not quite as strong as it once was. One notable modern griot, Seckou Keïta of Senegal, actually comes from mixed griot and royal heritage. His father was born into the Keïta clan, dating back to Sundiata himself, while his mother came from the griot Cissokho lineage. Although it is still too early to tell for sure, more non-griot individuals might strive to learn the jali’s art in the future.

How Many Versions of the Sundiata Story Exist?

As an oral tradition, the tale of Sundiata was recited for centuries without being written down. Only relatively recently (in the early twentieth century) did scholars start to record the epic with pen and paper. Because of this sizeable time gap between the Mali Empire and today, more than sixty versions of the story of Sundiata exist in published format. Some versions retain the epic’s original poetic style, while others are transcribed and translated into a novel-style form. Either way, translators of the epic work ensure that the original themes of Sundiata’s story are maintained in as authentic a form as possible. For this article, we will be using the most well-known published version of the tale, Djibril Tamsir Niane’s Sundiata: An Epic of Old Mali. Recounted by a griot named Mamadou Kouyaté, the epic was originally published in 1960, before being revised in English translation in 2006.

The Coming of the Hunters

Regardless of which version of the story you read or hear, the epic of Sundiata is the story of a prophecy. The tale begins with the arrival in medieval Mali of two hunters, who had recently killed a shape-shifting buffalo woman terrorizing the land of Do. The woman had agreed to be killed on the condition that the hunters return to the king of Do with her tail. Knowing of a prophecy of things to come, the woman asked the hunters to take a hunchbacked woman named Sogolon from the king as a reward. The hunters then returned to Do, and the king, believing them to be fools, permitted them to take Sogolon with them. From here, they made the journey to Mali.

The hunters greet the Malian king, Naré Maghan, and inform him of the prophecy — the rise of an heir to Mali even more renowned than Alexander the Great. They then give Sogolon to King Maghan in marriage. Initially, Sogolon resists the king’s attempts to woo her, but he impregnates her against her will one night. Months later, the heir to the prophecy — a baby boy named Sundiata — is born.

The early years of Sundiata’s life were not easy. By the age of seven, the young prince still had not learned to walk, much to the amusement of Naré Maghan’s first wife, Sassouma Bérété. Sassouma harasses Sogolon for her son’s disability, bringing her to tears. Seeing his mother upset, Sundiata resolves to walk. The prince’s griot, Balla Fasséké, goes to a local blacksmith for an iron rod for Sundiata. Although first struggling to stand, Sundiata does manage, twisting the rod into a bow with superhuman strength. Balla Fasséké recognizes the bow as the symbol of a great hunter, and Sundiata is praised by his neighbors. As he gets older, Sundiata surrounds himself with a number of friends, always accompanied and taught by Balla Fasséké.

Although Sundiata’s rise (both literal and figurative) is a positive development, Sassouma Bérété becomes fearful of him. Her own son Dankaran Touman had become king against Naré Maghan’s dying wish, and she controls the power behind the scenes. Seeking to retain control of Mali, Sassouma asks nine soothsayers to kill the young prince. For her sake, the prophecy could not become a reality.

The Exile and Sundiata’s Return

The soothsayers cannot bring themselves to harm Sundiata, but his troubles are far from over. Dankaran Touman sends Balla Fasséké away to the kingdom of Sosso under the guise of a diplomatic mission. Furious at his griot’s abduction, he and his companions confront the new king. With his mother, Sundiata goes into exile, promising to return. He hops from kingdom to kingdom, not staying in any region for more than a year.

This all changes when Sundiata reaches the kingdom of Mema. As a teenager, Sundiata becomes a warrior, fighting alongside Mema’s king, Moussa Tounkara, against the region’s enemies. He quickly gains Moussa’s favor and is widely respected by the regular soldiers. Sundiata grows to adulthood in Mema, but one day his mother, Sogolon, advises him to return home to Mali. The time of prophecy is rapidly approaching.

The Conflict With Soumaoro Kanté

Sundiata sets off for his homeland, eager to fulfill his destiny. During his journey back, however, he hears of the ruler of Sosso — a harsh, violent sorcerer-blacksmith named Soumaoro Kanté — and his recent conquests. Soumaoro has captured Mali, overthrowing Dankaran Touman. He holds Balla Fasséké hostage in a tower of human trophies and continues to plunder the people of the region.

Despite his initial anger at Sundiata’s planned departure, the king of Mema gives in and provides Sundiata with cavalry and warriors. Sundiata travels across the Sahel region, recruiting allies from the neighboring kingdoms. In Tabon, ruled by his childhood friend Fran Kamara, Sundiata wins his first battle against Soumaoro’s army. His troops continue to drive back the forces of Sosso, but Sundiata is unable to harm the sorcerer-king at all. It is in the town of Sibi that Sundiata reunites with his sister, Nana Triban, and Balla Fasséké. Having escaped from Soumaoro’s tower of horrors, they have learned the secret to his powers: the spur of a rooster’s foot. Sundiata and his allies now know how to defeat Soumaoro and reclaim Mali.

The Final Confrontation and Destiny Fulfilled

The Battle of Kirina is the decisive stage of Sundiata’s conflict with Soumaoro Kanté. The heir of Mali forges an alliance with Soumaoro’s own insurgent nephew, Fakoli Koroma. Attaching a cock’s spur to his arrow to form the arrowhead, he heads into battle. Unfortunately, Sundiata’s loyalists are dangerously outnumbered by the armies of Sosso and take losses.

Soumaoro, now aware of Nana Triban and Balla Fasséké’s espionage, continues to avoid confronting Sundiata directly. As the battle rages, Sundiata lets his arrow fly, hitting Soumaoro in the shoulder. The king of Sosso flees in defeat, never to be seen again. From Kirina, the alliance marches on Sosso itself, burning the capital city and clearing out Soumaoro’s remaining regional allies. The victorious Sundiata has become the master of Mali, dispensing justice as the first ruler of a united empire.

Sundiata’s Legacy: The Story in the Modern Age

No version of the Epic of Sundiata indicates exactly when the founder of the Mali Empire died. What is clear, however, is that his clan, the Keïtas, would make their names widely known in the medieval world. The fourteenth-century emperor Mansa Musa, whose gold-studded pilgrimage to Mecca attracted the attention of Arab writers, claimed to be the great-nephew of Sundiata. Even today, the surname Keïta carries a noble connotation across the Sahel.

The story has also left an undeniable imprint on not only West African culture, but also the world. Many high schools and universities today include Sundiata in courses on African literature and history. Some people have even claimed that the legend inspired Disney’s hugely successful animated film The Lion King, although the movie shares more similarities with William Shakespeare’s Hamlet.

While it might seem that oral tradition does not have a role to play in our world of text messaging, cell phones, and the internet, something about Sundiata’s adventures continues to resonate with people across cultures. The Epic of Sundiata — and the jaliw who recite it — have more than stood the test of time, enthralling and inspiring multitudes for the past seven hundred years.