In the last decade, some auction houses broke the world records for most expensive books ever sold. But there are lesser-known historical gems that went to auction, too.

In the last decade, some auction houses broke the world records for most expensive books ever sold. But there are lesser-known historical gems that went to auction, too. Below, we’ve gathered some of the most interesting and valued scripts sold in the last ten years. 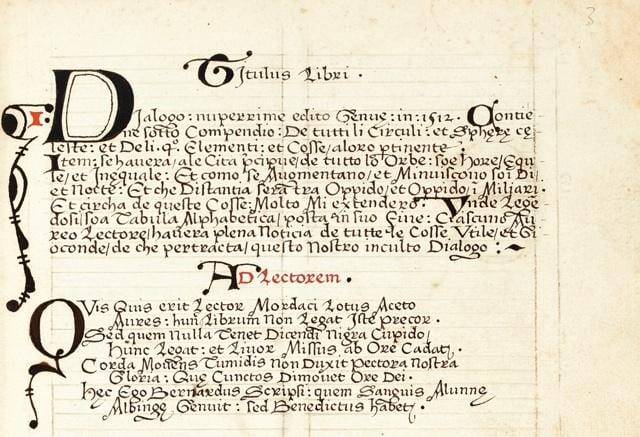 Bernardus Albingaunensis manuscript is significant because it contains accounts of Christopher Columbus’ and other explorer’s voyages. It also includes notes from Michele de Cuneo, who accompanied Columbus’ journey from 1493-1494. A bonus account comes from Vasco de Gama, the first European to reach India by Sea. The book is full of many more details, such as descriptions of the Arabian Sea, and astronomical diagrams.

This text is the first printed edition of Aristotle’s study on the natural world, De animalibus. In it, the philosopher described over 500 species, and studied major topics like zoology, physiology, and embryology. Theodore Gaza, a Greek humanist, translated the text from Greek to Latin. It’s printed on vellum paper, a high quality material made from processed animal skin. There are only two copies of this translation on vellum.

This item stands at the most expensive piece of French literature ever sold. What makes it different from others is that it was one of Proust’s copies. It’s also one of five editions of Swann’s way printed on Japanese paper. Above, a personal note from Proust reveals that this book was a gift for his dear friend, Lucien Daudet. The first part of it says

[translated] “My dear friend, you are absent from this book: you are a big part of my heart that I can’t paint you objectively, you will never be a ‘character’, you are the better part of the author…”

Abraham Lincoln Signed Manuscript page comes from an autograph book that belonged to Linton J. Usher, the son of one of Lincoln’s cabinet members. On the president’s page, you can see both a paragraph from his second inaugural speech, and his signature. It’s one of five manuscripts that exist of his address. This copy contains its last paragraph, beginning,”

“With malice toward none; with charity for all; with firmness in the right, as God fives us to see the right, let us strive on to finish the work we are in…”

Most Valuable Comic Books By Era

The Birds of America is one of the most expensive books ever sold. It contains 435 hand-painted prints of birds from North America, but only 119 copies of it exist. Today, public institutions own almost all of them. Only 13 individuals have a private copies of the ornithology. In addition to its hefty price and rarity, it also has detailed drawings of species that have gone extinct.

Jewish people value the Babylonian Talmud as a central document to their faith. That’s because it’s the foundation for most Jewish laws and guides how followers should live their daily lives. Daniel Bomberg created the first printed sets of the Talmud. This one is in crisp condition, and one of fourteen sets that still exists. Bomberg’s print work was so high quality that people considered them a luxury when he was alive. Today, his Talmud’s rarity still makes it one of the most valuable books.

4. George Washington’s Annotated Copy of the Constitution and Bill of Rights (1789)

George Washington owned (and wrote in) his personal copy of the documents that helped form the U.S. You can flip through the pages from the Washington Library digital collections. In several sections, he bracketed off lines and wrote ‘president’ to highlight his responsibilities. Washington also commissioned a bookplate with his family coat of arms, which rests near the title page. He reserved this practice only for his most prized possessions.

5 Easy Ways To Start your own collection of art, antiques, and collectibles.

St. Cuthbert Gospel is the oldest European book that’s fully intact. Scholars believe it was made in North East England, and sat in St. Cuthbert’s coffin. St. Cuthbert is significant to Britain as an early saint that converted most of the nation from Paganism to Christianity. This relic specifically has the Gospel of John; its material is so well preserved that you can read the pages as if it was written in modern days. In 2012, the British Library bought it through a large fundraising campaign.

This collection was the first book printed in British North America. Residents of the Massachusetts Bay Colony created it just 20 years after pilgrims arrived at Plymouth. The colonists weren’t happy with their current translations of the Biblical Book of Psalms. So, they hired local ministers to retranslate it. Of the original 1,700 copies made, there are only 11 left that we know of.

Sold: September, 2017, by the Community of Christ
Estimate: Direct sale to The Church of Jesus Christ of Latter-day Saints
Realized Price: $ 35 million

The Book of Mormon manuscript is the most expensive book ever sold. Oliver Cowdrey, one of Joseph Smith’s followers, handwrote it according to Smith’s direction. This became the basis for the official printed version. The Book of Mormon print only has three less lines than this draft. The LDS Church History Museum in Salt Lake City now holds this rarity in their collection.

5 Simple Ways To Start Your Own Collection