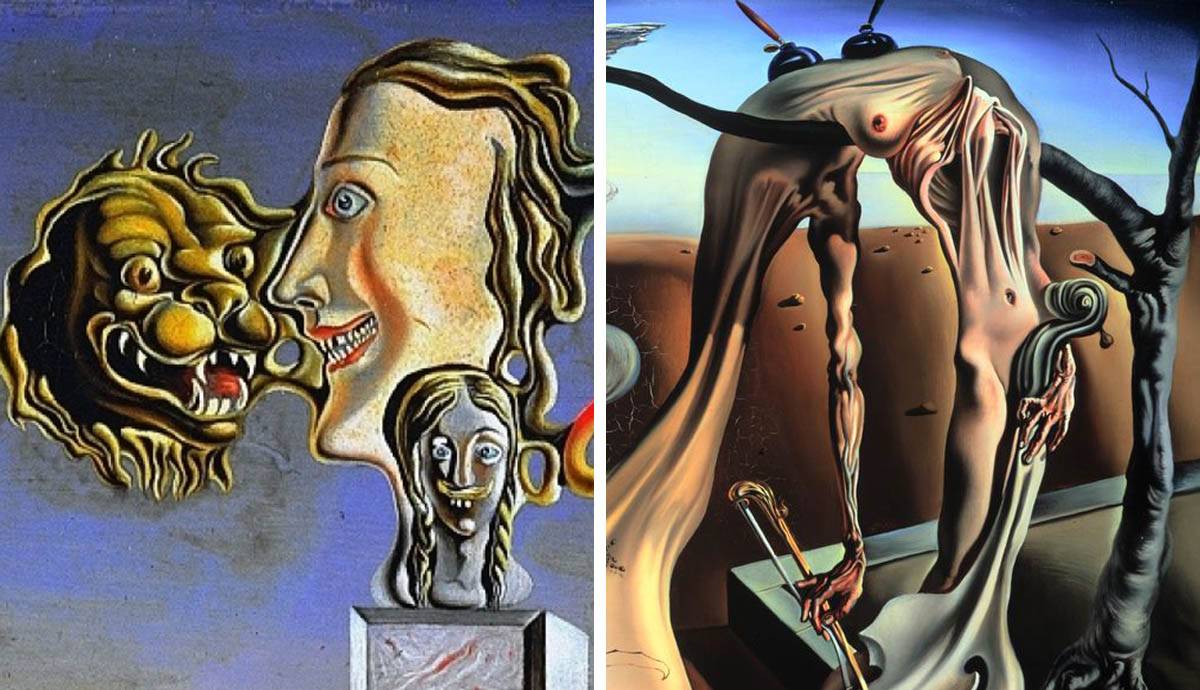 Franco-Spanish artist Salvador Dali is the great father of Surrealism, whose imagination knew no bounds. From melting clocks and stretched bodies to floating faces and hovering fruit, his paintings mined the depths of his subconscious for ideas, and they remain some of the most bizarre and incredible in the entire history of art. Throughout much of the 20th century he produced an enormous body of work, including paintings, prints, sculptures, fashion, architecture and more, and made his name as a leader in the school of French Surrealism. In this article we focus on his top 5 weirdest Surrealist paintings, which continue to transfix audiences today.

Illumined Pleasures, 1929, was made by Salvador Dali during his mature period, as he was finding his voice as a leading Surrealist painter in Paris. Three boxes dominate the canvas, each playing out their own stories inside. Much like many of Dali’s paintings, the backdrop setting behind them is a barren desert, which became a potent symbol for the unconscious human mind. The self-contained boxes here reflect Dali’s growing fascination with cinema, and its ability to transport us outside the ordinary world – he made his first film Un Chien Andalou, (An Andalusian Dog), 1928-9, not long before completing this painting.

The Persistence of Memory, 1931

The Persistence of Memory, 1931 remains today Dali’s most iconic and celebrated works of art, and its signature melting clocks are now synonymous with his name. At the time of making this painting Dali was developing what he called a “paranoiac-critical” method, which involved inducing psychotic episodes and hallucinations that would provide imagery for his art. In doing so, his intention was to let go of the rational, physical world and enter into a new one dominated by dreams and subconscious thought. He argued, if the real world had led us into a horrifying world war, then escapism into another one was the only way out. In the center of the image, the amorphous head is based on Dali’s own profile, while in the background, the mountains mimic those of his homeland in Catalan.

Metamorphosis of Narcissus, 1937, is another profound example of Dali’s “paranoiac critical” period, when he was obsessed with painting an imaginary world dominated by irrationality and dreams. This painting was Dali’s interpretation of the Greek myth of Narcissus, the arrogant, youthful beauty who broke many hearts. After falling in love with his own reflection in a pool, he drowned trying to grasp it, and was immortalized as the Narcissus flower. Dali’s meticulously painted rendition of the story depicts a hunched Narcissus to the left, who gazes into a reflective pool, while on the right, a haunting white stone hand holds an egg from which the Narcissus flower emerges, signifying the process of rebirth and regeneration at the heart of the story. Dali famously took this painting with him when he met his hero, the great psychoanalyst Sigmund Freud in 1938. Fascinated by its detail, Freud observed, “it would be very interesting to explore analytically the growth of a picture like this.”

Daddy Longlegs of the Evening Hope, 1940

Dali made Daddy Longlegs of the Evening Hope, 1940, shortly after moving to the United States, following the outbreak of World War II. It signifies a new era in his art, with fresher colors and photographic qualities of light. Haunting, unsettling imagery includes a female figure stretched like rubber over a dead tree, a spindly daddy longlegs, a melting violin, and a violent cannon shooting out a thick liquid alongside a majestic silver horse. The entire image is filled with disturbing references to the advent of war, expressing the artist’s growing sense of helplessness and despair.

By the time Dali painted Living Still Life, 1956, he had moved to Portlligat in Spain, where he remained for the rest of his life. During this time he entered a new artistic period which he called “Nuclear Mysticism,” merging elements of science, physics and art together. We see a new aesthetic in this particular painting which is photorealist in style. But in typical Dali fashion, he brings in elements of the absurd by floating his still life objects in mid-air, and it is as if they are actually alive. In the background, a hypnotic ocean view opens out across the horizon, acting as an enduring symbol for the dream-like states Dali invoked in his art.