HomeStoriesWhy is the Apollo 11 Lunar Module Timeline Book So Important?

Why is the Apollo 11 Lunar Module Timeline Book So Important?

On July 18th, Christie’s Auction House celebrated the 50th anniversary of the 1st moon landing with a space-themed auction called One Giant Leap.

On July 18th, Christie’s Auction House celebrated the 50th anniversary of the 1st moon landing with a space-themed auction called One Giant Leap. Auction pieces included vintage photographs signed by astronauts, a detailed moon map, and a camera brush with moon dust that was once in the hands of the Apollo 14 crew. However, the peak of the auction was expected to be an item that was besides Neil Armstrong and Buzz Aldrin on their first mission to the moon: The Apollo 11 Lunar Module Timeline Book. 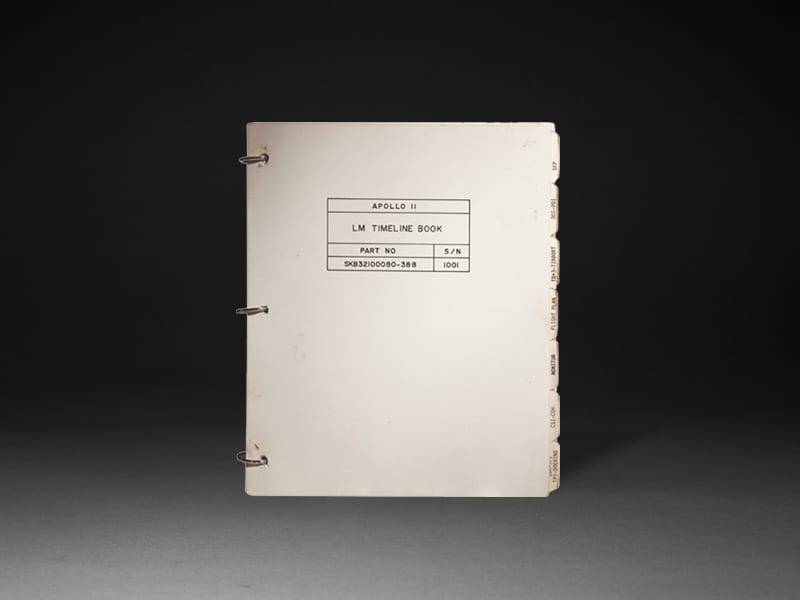 Cover of Book. via Christie’s

What sets this item apart from others is that it’s the first manual ever created to thoroughly detail the first launch to the moon. An introduction by Christie’s shows that the book begins on July 20th, 1969, and follows up with hour by hour (including lunch break)  plans to track every step necessary for a successful landing. The steps include everything from intricate drawings of what angle their lunar module should land on to the hour that Aldrin and Armstrong should put on their gloves.

The book has plans up to July 20th, the day that the Apollo Lunar Module Eagle landed on the celestial body. What’s more fascinating is that it also contains the first writing done on the moon. Two minutes after their arrival, Aldrin stretched over to write the coordinates of their location. You can see through the number’s angles that he had to stretch over, as Aldrin was right-handed while the book was to his left.

On the item description page on Christie’s website, it includes a commentary by Aldrin,

“In my excitement… I left out one decimal point and put the other after the 7 instead of before.”

While the daily schedule on the book makes the piece feel like a narrative, it’s the stains and marks on it that make it feel more human and close to home. Pages are riddled with smudges of moon dust, scotch tape, pen marks, and a standard coffee stain.  Aldrin’s initials are written in faded pencil marks at the top right corner of the cover page. It was he who kept the book first, before selling it to its current owner in an LA auction in 2007.

Christie’s estimated that the book could be valued at between $7 million or $9 million. Forbes writer Abram Brown analyzed that the current market for space collectibles are seeing prices rise. However, he lists 2 things that might affect this trend: increasing supply, and future space travel. As astronauts from the space-race age, more of them are selling their collectibles. On the other hand, it’s hard to predict how future ideas, such as visiting Mars, will impact the value of previous items. However, it’s still worth considering the value of older space media in case future plans are recorded only digitally.

Despite this demand for NASA antiquities, the Lunar Module Timeline Book ended up being bought back by the owner for $5 million. Artnet news writer Caroline Goldstein noted that lower-priced items garnered more enthusiasm and interest. For example, a photograph of Aldrin called Tranquility Base was sold for $32,000, about 3x more its expected value.

A look at Christie’s lot list shows that the main photos sold sell for a much higher value than expected are those of Apollo astronauts. One photograph of astronaut and test pilot Michael Collins alongside Armstrong was expected to go for $3000-$5000. Collins was on the Apollo 11 mission, but he is lesser known since he was responsible for controlling the lunar module if they had to leave the other astronauts behind. It ended up selling for 5x its estimated price at $25,000. This is as opposed to Mercury program memorabilia, which generally sold for the estimated price. To illustrate this trend, you can see that the photo Mercury Aviators, signed by 3 Mercury astronauts, sold for $2000.

Although the Timeline Book didn’t sell, the Apollo 11 Mission Report did for $20,000. NASA’s website has a PDF version of this available. It evaluates each step to the Apollo 11 mission, yet it doesn’t have the same value of having been on the moon.

When Aldrin originally gave up the book in Goldberg’s 2007 Space Sale, it was auctioned for $220,000. In 2012, Congress created a law that granted Mercury, Gemini, and Apollo mission astronauts full ownership rights to items they brought back from space. This meant more items could be sold, and Aldrin issued a statement to CollectSpace in 2013 stating that he would not sell anymore of his memorabilia, adding,”

“I intend to pass a portion of these items on to my children and to loan the most important items for permanent display in suitable museums around the country.”

Aldrin proceeded to accept one more auction in 2017 to support his nonprofit, Share Space Foundation, which included select Apollo 11 items. Yet, one might want to consider purchasing space memorabilia while they can still get it, and before other astronauts decide to keep the final pool of what they have.

Despite Not Selling It Is Still Historical Evidence

Perhaps part of what made the Timeline book hard to appreciate for viewers are that its drawings are very mathematical. Some notes such as “Eating Time” are easy to follow, but other pages show complex formals and codes for what could best be described as, well, rocket science.

“People collect books because … it’s an object you can hold in your hands, and it connects you to a particular time and place… You hold it, and you feel what it was like at that moment when the human experience just got a little bit bigger.”

Sotheby’s is also auctioning several feats of Apollo 11 memorabilia in celebration of this anniversary. On July 20th, they auctioned 3 tapes of the first walk on the moon. They’re thought to be the only remaining video left from the generation it happened.

Among all the items being auctioned now, the Apollo 11 Lunar Module Timeline Book still stands out as first-hand historical evidence of the inspirational journey to the moon.

Asclepius: Little Known Facts Of The Greek God Of Medicine