HomeAnswersWhy Is the Battle of Yarmouk So Important?

Why Is the Battle of Yarmouk So Important? 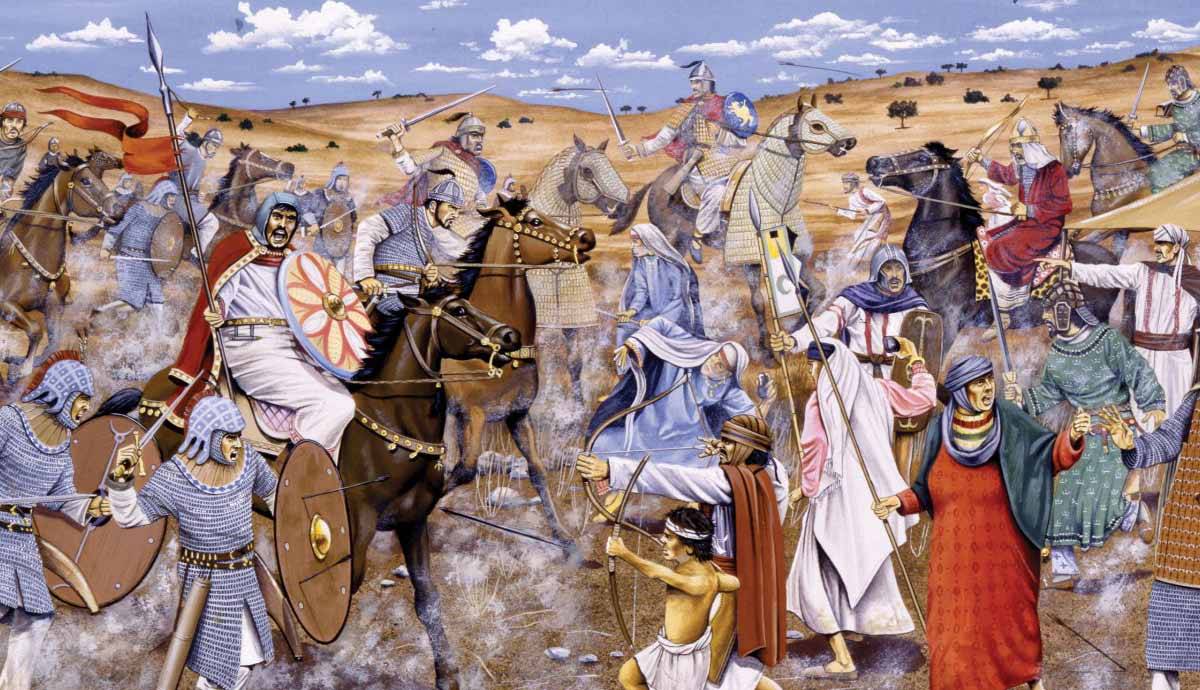 The Battle of Yarmouk, or Yarmuk (636 AD), is undoubtedly one of the most significant events in history. At the onset of the battle, the Roman Empire was the major power in the Near East, a clear victor in a decades-long war with its ancient nemesis Persia. However, after the fateful Battle of Yarmouk, the Romans were the ones on retreat. In the course of six days, Heraclius’ triumph turned to tragedy.

The Romans, also known as the Byzantines, managed to avoid the fate of the Sassanids. However, in the following years and decades, the Roman Empire lost all of its Eastern provinces, including Syria and Egypt, to the unstoppable armies of Islam. Thus, the turning point at Yarmouk opened the way for the Arabic expansion, completely reshaping the geopolitical and religious map of Eurasia, and changing the course of history for good.

The Devastating Roman-Persian War Led to the Battle of Yarmouk

The Battle of Yarmouk was a decisive Arab victory, but it would probably not happen if the long-standing rivals – Persia and the Roman Empire – did not engage in the fight to the death. Known as the Last Great War of Antiquity (LGWA answers), the decades-long conflict between two traditional rivals – the Romans and Sassanids – ravaged the Near East, ruining the economy and military capabilities of both empires and undermining their defenses. This happened at the worst possible moment, exposing them to the attack of the unexpected enemy – the Arabs.

The Arabs Were a New and Dangerous Threat

Arabs raids were recognized phenomena in the area, and the Roman commander initially ignored the attacks, considering them little more than a nuisance. The rude awakening, however, came in late 633 AD, following the defeat of combined Roman-Persian forces at Firaz. Both Ctesiphon and Constantinople became aware they were facing a more powerful and better-organized enemy fueled by newly-founded Islam.

The large-scale offensive of Roman Syria further confirmed those fears. Their fears were confirmed in 634 following a large-scale offensive of Roman-controlled Syria. The enemy, who mainly relied on mounted light troops (including cavalry and camels), broke through the imperial defenses and seized Damascus, one of the major Roman centers in the East. Alarmed, emperor Heraclius decided it was time to act.

The Romans Assembled a Massive Army

By Spring 636 AD, Emperor Heraclius raised a massive multiethnic army, numbering up to 150,000 men. One of the largest imperial armies ever assembled faced a much smaller Arab force of 15 – 40 000 men. Yet, the sheer size of the army and its composition posed several issues. First, the enormous force required several commanders to lead it into the battle. Second, due to the scarce resources in the area, the army could not be maintained for long. Third, the multiethnic nature of the army and its commanders brought the underlying ethnic and religious tensions to the fore. The result was decreased coordination and planning, which contributed to the catastrophe.

Heraclius Was Not Present at Yarmouk

There was one significant omission in the Roman ranks. Unable to fight, emperor Heraclius stayed in distant Antioch, delegating the overall command instead to two generals, Theodore and Vahan, the latter acting as supreme commander of the imperial forces. While the imperial commanders bickered among themselves, further hampering the efficiency of the massive army, the much smaller Arab force had a simpler chain of command, led by a brilliant general, Khalid ibn al-Walid.

The Battle of Yarmouk Was a Huge Risk for the Romans

Upon hearing the news of the large imperial army approaching, Khalid abandoned Damascus. Instead, he massed the Muslim forces at large plain south of the Yarmouk River, a major tributary of the Jordan, now border between Jordan and Syria. The wide plateau was ideally suited for Arab light cavalry, which accounted for a quarter of Khalid army’s strength. The flat area could also accommodate the huge imperial army. Yet, by moving all his forces to Yarmouk, Vahan committed his troops to a decisive battle, a risk that Heraclius tried to avoid.

After Roman plans to coordinate the attack with the Sassanids failed, the imperial generals decided to attack. The Battle of Yarmouk began on 15th August and lasted for six days. Despite achieving limited success in the first days of the battle, the Romans failed to deal the decisive blow to the enemy. The closest the imperial forces came to victory was the second day, when the heavy cavalry broke through the enemy center, causing panic in the Arab ranks. According to Arab sources, the ferocious women forced their husbands to return to battle and drive the Romans back.

The Roman Army Was Annihilated at Yarmouk

Throughout the battle, Khalid ibn al-Walid aptly used his cavalry to inflict heavy damage on the Romans. On the fourth day, after it became clear that no breakthrough was possible, Vahan called for a truce. It was the moment the Arab general had waited for. Knowing that his adversary was demoralized and exhausted by a protracted battle, Khalid ordered the attack. The night before the assault, the Muslim horsemen cut all the exit areas from the plateau, taking control of the crucial bridge over the Yarmouk River.

Thus, when the Arab cavalry defeated the Roman cataphracts, the panicking infantry found their escape route cut off. Carnage ensued. Many drowned in the river, while some fell to their deaths from the steep hills of the plateau. Khalid achieved a triumph, annihilating the imperial army while only taking around 4,000 casualties.

The Battle of Yarmouk Unleashed the Arab Conquest

The disaster at Yarmouk led to the total collapse of the Roman defenses in the East. Emperor Heraclius left for Constantinople, bidding a last farewell to Syria: Farewell, a long farewell to Syria, my fair province. Thou art an infidel’s now. Peace be with you, O Syria—what a beautiful land you will be for the enemy. Heraclius was painfully aware of the lack of resources and manpower to defend the region. Instead, the emperor planned to consolidate the troops in Anatolia and Egypt. Yet, the imperial forces were helpless to stop the Arabic steamroller. In less than a century, all the eastern provinces, from Syria and Mesopotamia to Egypt and North Africa, fell like dominoes to the armies of Islam.

The Roman Empire managed to retain control over Anatolia. Unlike its old rival – the Sassanid Persia – the Roman Empire, also known as the Byzantine Empire, would survive, fighting a bitter struggle against a dangerous foe, gradually transforming into a smaller but still powerful medieval state.