HomeArtYou Are Not Yourself: Barbara Kruger’s Influence on Feminist Art

You Are Not Yourself: Barbara Kruger’s Influence on Feminist Art

In the 1980s, postmodern feminist art was on the rise. By analyzing Barbara Kruger’s work 'You Are Not Yourself', we can explore how Kruger influenced this movement. 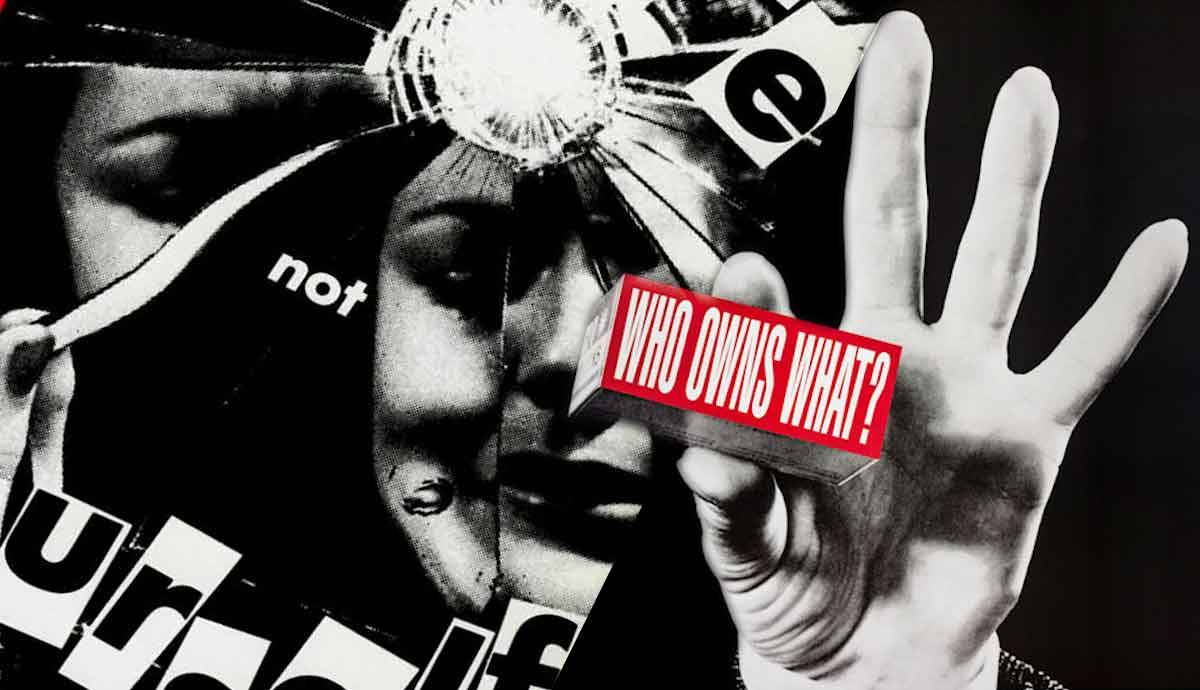 In the early 1980s, a profound change within the feminist art movement was taking shape. Artists were beginning to address feminism through the lens of postmodern theory, seeking to explore questions of identity and gender that were not initially addressed in the feminist art of the 1960s and 1970s. At the forefront of this shift was the work of conceptual artist Barbara Kruger, known for her bold text art critiquing consumerism and mass media. By taking a closer look at one of her works, entitled You Are Not Yourself, we can see this ideological shift in feminism come into play through the genius of Barbara Kruger, as well as how she employs language and typography to make the viewer question even their own identity.

Born in 1945, Barbara Kruger was raised in a working-class family in Newark, New Jersey. She briefly attended both Syracuse University and Parsons School of Design before getting hired at Condé Nast Publications to work in the page design department for Mademoiselle magazine. The following ten years saw her working as a freelance graphic designer and photo editor for numerous publications and projects.

Kruger started creating art as early as 1969, experimenting first with multimedia wall hangings and more abstract art and objects. After taking a break in 1976 and moving to Berkeley, California, where she taught at the University of California, Kruger returned to the craft, focusing on photography. It wasn’t until the early 1980s that Kruger began creating her iconic collage and text art that she is famous for today.

Kruger’s work reflects the consumerist media’s discovery of the formative power of images, but she uses this theory for a political end goal. With her past experiences in advertising in mind, Kruger developed her signature look: high-contrast black and white photographs with words set in bold block-shaped font superimposed on top. The phrases are usually short and simple but packed with meaning. What makes this format so effective is its simulation of media imagery: the black and white photos are similar to those found in newspapers and tabloids, while the bold, simple words seem very dictatorial, lending credibility to the statements (see Further Reading, Linker, p. 18).

Kruger’s background in graphic design and advertising is reflected in her signature style of the 1980s, the decade in which she produced many of the works that make her famous today, including I Shop Therefore I Am (1987) and Your Body is a Battleground (1989); the latter was produced for the Women’s March in Washington DC. Such short, powerful text, often written in either the sans-serif Futura Bold Oblique or Helvetica Ultra Condensed fonts (both of which she popularized), comprises the centerpiece of her works, normally layered over a black-and-white photograph. These elements combined allow Kruger to address very simply such complex subjects as identity, consumerism, and feminism. This was especially important in the 1980s as postmodern ideas incorporated themselves into feminist thought: ideologies were changing, and Kruger’s work was at the forefront in showcasing this transformation.

The Evolution of the Feminist Art Movement

The feminist art movement in the United States developed during what is known as “second-wave feminism.” This era, spanning from the 1960s to the 1980s, focused on questions of sexuality, gender roles, reproductive rights, and the overturning of patriarchal structures. In contrast, first-wave feminism, which dates back to the 19th century, was more centered on women’s suffrage. It is also important to note that it wasn’t until second-wave feminism that women of color held prominent positions within the movement; the first wave was led primarily by white women heralding from middle-class society, with the exception of early feminists tied to the abolitionist movement, such as Sojourner Truth.

Ideologically, the rise of the feminist art movement in the 1960s and 1970s sought to reclaim the female identity while preserving what they believed were the fundamental differences between men and women. Feminist artists during the seventies explored the shared, collective experiences of women as a means to understand themselves as individuals (see Further Reading, Broud & Garrard, p. 22). A lot of this exploration dealt with the female body, which had become a symbol of passivity and objectification.

Feminist art of the 1970s hoped to change that: it sought to raise traits considered typically feminine to the same level of value and appreciation as traits deemed masculine. Additionally, rather than valuing feminine beauty for its effect on male desire, artists sought to value feminine beauty for their own empowerment. Examples of art from this era include the performance art piece Interior Scroll by Carolee Schneemann, The Dinner Party by Judy Chicago, and the film stills created by Cindy Sherman.

By the 1980s, feminist artists began to expand the definition of feminism by exploring the idea of gender not being biological but rather a construct produced through representation (see Further Reading, Linker, p. 59). The new belief was that the impact of signs played a significant role in determining social standards of sexuality, and the masculine/feminine binary is a result of this. Rather than simply reclaiming the female body from the male gaze, this new generation of feminism wanted to know why the woman is passively allowing a male gaze and why the man is the active spectator in order to destroy the underlying ideology altogether.

You Are Not Yourself

Barbara Kruger’s 1981 montage You Are Not Yourself expressively illustrates these concepts in her classic style. A woman peering into a broken mirror, holding one of the fragments between her fingers, is shown with the superimposed words “You Are not Yourself” on top. The shattered mirror distorts the woman’s image, thereby rendering the representation of herself as a female in society visibly altered; she is no longer herself as society can define her. Thanks to the many standards and often conflicting roles that women are held to in her community, a woman’s self-reflection can, in many cases, lead to the realization that she herself is fragmented and, therefore, not herself.

Kruger calls attention to the implicit assumption of femininity as a contextual ideal; word does not have meaning without constructs or concepts, and the same goes for gender. The biological differences in gender have no meaning until they are discussed and framed in a way that makes them meaningfully different. Furthermore, one’s sense of self is subject to something else, which means that perhaps, you never can truly be yourself.

You Are Not Yourself more specifically addresses the identity of women in the context of society and how their field of representation must be changed if they hope to break out of sexist constraints. The “control and positioning of the social body” is instrumental in producing a normal member of society who can fit well into its ideological, social, and economic orders. Kruger seeks to redefine the human subject in terms of social forces. In her work, she does so by accentuating the stereotypes and representations accompanying femininity in order to manifest a change. Additionally, Kruger questions the positioning of the social body; she explores how individuals are formed by society and how public customs and mores dictate who they are. Individuals always exist in relation to something else; it is impossible to be without outside influences.

The Importance of Text

What truly enables the work’s effectiveness in You Are Not Yourself is the phrase itself, overlaid on the image in a jarring, collage-like style. Each individual letter seems to be cut from a magazine, with the exception of the small “not” in the center of the image. Kruger uses a bold font in order to lend an authoritative voice to the text and employs personal pronouns to draw the viewer into the conversation, thus rendering the spectator no longer independent of the discourse.

Words are powerful, and they can subjugate us. Kruger makes the “not” very small in the center, with white letters on a black background, which is the reverse of all the other words’ formatting. She does this so that, from far away, the image could read “You are yourself,” tricking the viewer into believing a different message is told by the work, thus demonstrating the importance of outside context when determining the qualities of self.

The use of the pronoun “you” in the phrase is made to seem as if it addresses both the woman in the picture and the viewer, thereby placing them in the same manufactured experience. The individual letters of the phrase are cut and separated, further giving the feeling of fragmentation. You Are Not Yourself is a call for the audience to become aware of their own subjectivity as individuals. We are merely a representation of ourselves and only exist through the eyes of others.

Tackling such heavy subjects as consumerism, feminism, and identity politics in art is no small task, but accomplishing this via rendering these subjects into bold and provocative images that recall fashion spreads and mass media imagery is all the more impressive. Barbara Kruger brought feminist thought onto the postmodern art scene, thus engendering important conversations among not just those in the art world but society as a whole.

Her easily recognizable textual art calls into question many aspects of our world, and You Are Not Yourself speaks especially to the construct of gender in society and how it affects the female identity. Other works that address this include Untitled (Your Gaze Hits the Side of My Face) from 1981, which calls into question the role of the male gaze, as well as her seminal work Your Body is a Battleground from 1989.

By Anna SextonBA Int'l Relations, BA Art History, MA in-progressAnna holds a BA from the University of Washington in Art History and International Relations and is currently based in Strasbourg, France. She has worked in several museums and art galleries in the Seattle area as well as abroad. She is currently completing her Master's thesis on the spoliation and restitution of Nazi-looted art in Strasbourg. When she is not writing & researching, Anna enjoys dancing ballet, learning languages, doing crosswords, and drinking tea.